Euro Truck Simulator 2’s mods are about crafting a more personal play space to make your evening truck fun just so. One person’s favourite sounds tweaks might sound like a broken axel grinding away to another person, which is a tricky thing to balance when gathering up some glorious gear-boxes. I took the view that the trucks themselves would be better off left largely alone and went looking for more immersive additions. Come truck with me, let’s see what I found en route.

Truck Sim mods come and go, some being abandoned on the side of the road and left to rot. So no mods that haven’t been updated recently. Some I would have included if not for the fact that they’re now paid for, and though I support anyone who wants to earn money from their work, that’s not the spirit of this column. So no Promod, basically.

How to mod Euro Truck Sim 2

The game has a mod loader that takes care of a lot of the work for you. You drop the mod file into the “mod “ folder found in My Documents>Euro Truck Simulator 2>mod. Steam mods will automatically fight the right place to land.

This is the sort of mod that makes me want to install a game to play around with it. Local Radio will enhance in-game realism via the medium of FM radio. As you drive through the countries, the radio will automatically change to the stations native to that region. You will be immersed in Europop, draped in ads for Swedish curtains, and lulled by the bland chit chat of local radio. That is until Jan 1st when you’ll be stuck in a lay-by Kent. It runs outside the game, so download it, extract it, and run the program to install the plugin. A local server will take care of the rest. You can switch using the web interface, your keyboard, your controller and your mobile phone.

There are over 500 stations that you can curate for your immersive truck fun, and you can select favourites to swap to when you cross the borders. 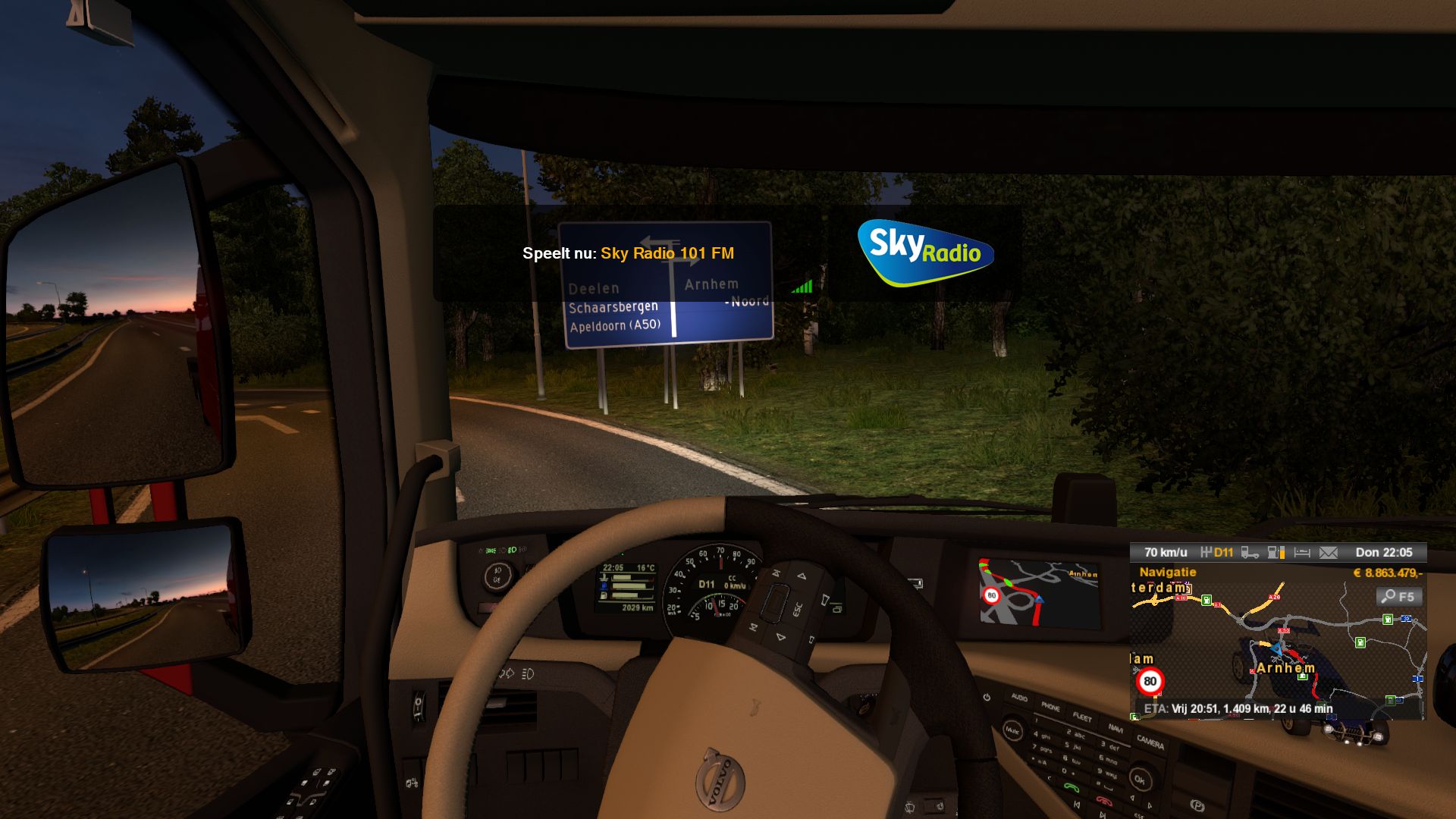 The lonely trucker life might not be so lonely if you install Truckers MP. With it installed, you can travel the lengthy roads alongside other human drivers filling in for the AI. There’s a charming sense of community when you pass another player on the road and give a toot of the horn.

It’s not just a mod to share the world with other drivers. There are events and virtual trucking companies set-up to live life as a trucker. The VTCs are essentially roleplay groups with their own rules, schedules, and even liveries. If you’re looking to turn your trucking obsession into a convoy with other players, Truckers MP is the best way to go about it.

I like to think of EuRoadNet as roadworks for the main game. The relatively new map mod aims to “creatively rebuild and extend the original map, adding new cities, roads and more”.

It originally started out as an overhaul of Germany, so more of the work has gone into the roads and cities there. With a dozen cities and towns, and a huge amount of roads reworked, you’ll certainly see a difference when laying down some rubber in Vogelsdorf. The other countries currently tweaked are Poland, Denmark, France, Belgium, and Norway. They’re not nearly as far along as Germany, though. 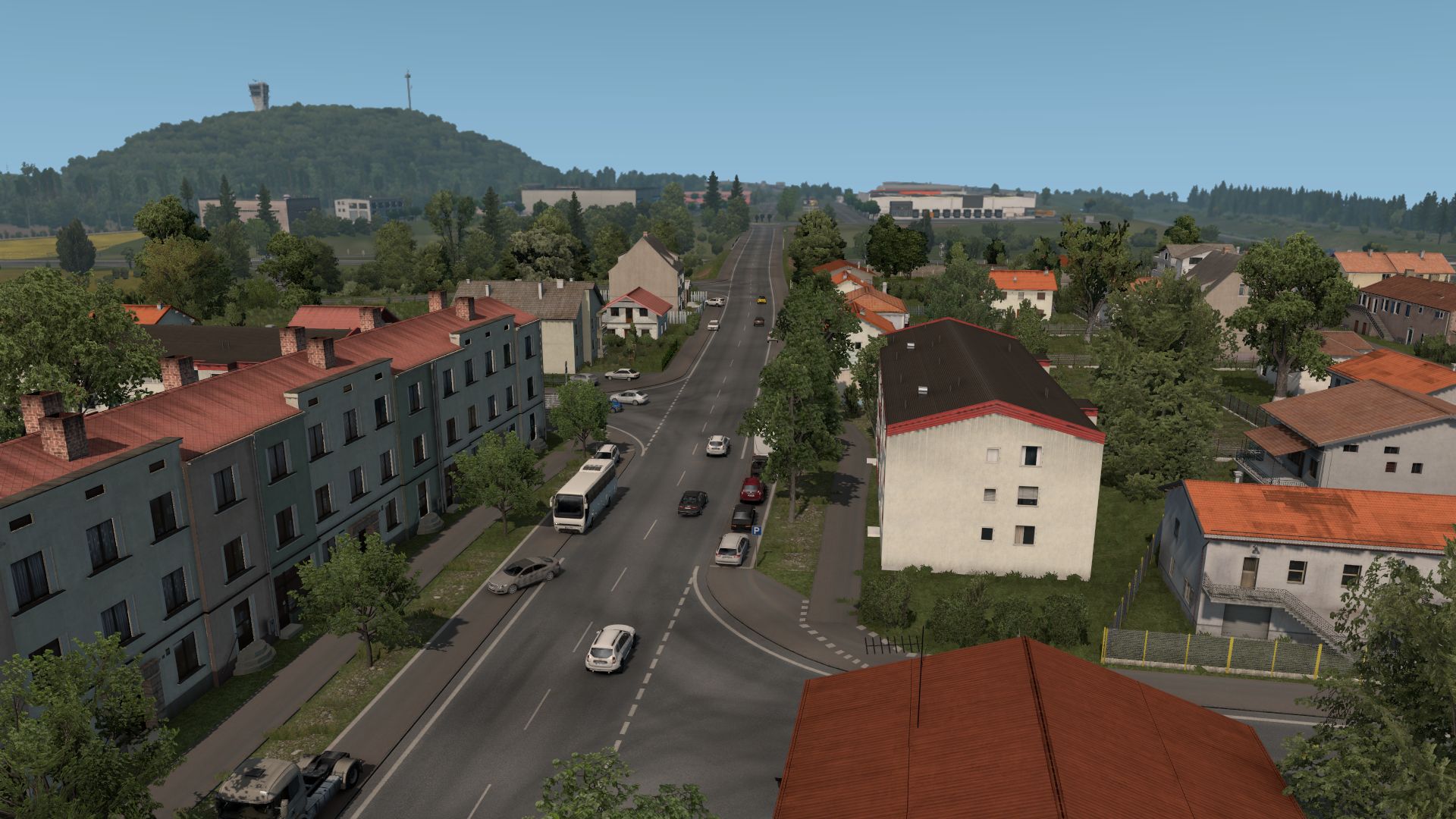 Ultimately, unless they own a giant mapping company that can rebuild the world from space, games tend to make the real-world abstract and disappointing. That’s where efforts like Paris Rebuild find their niche.

The rebuild includes new roads, closed roads reopened, the Eiffel Tower and Notre Dame cathedral. Tweaked roads to allow for denser traffic (so very Paris) and buses, connections to more of France’s travel corridors beyond the city. Perfect for when you really need to deliver some brie. 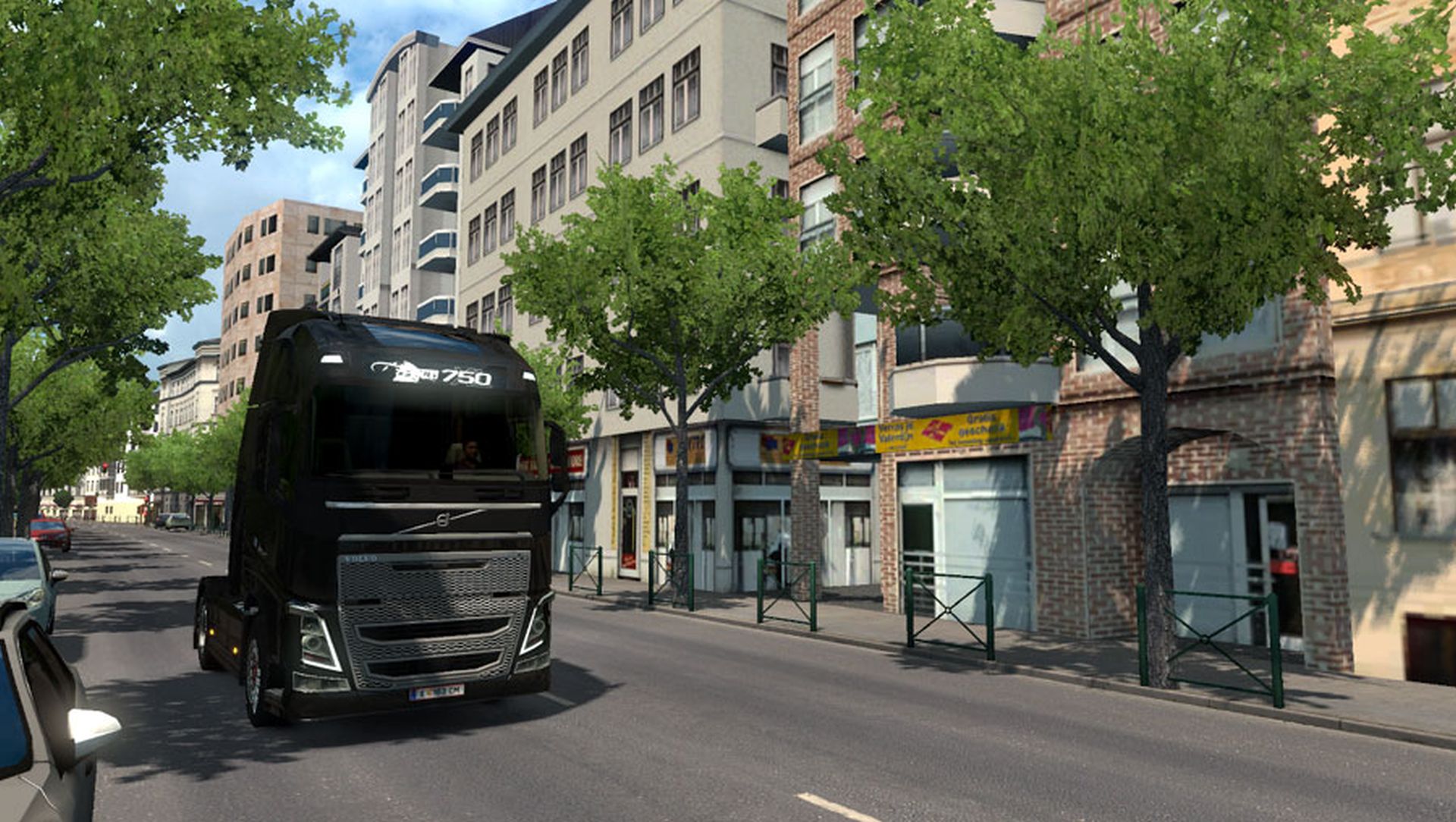 Immersion is a big thing in sims, so making the world feel right is a goal we mother truckers always share. Realistic Graphics Mod has over 70 new sky textures. You’ll be staring out at the sky a fair amount from your cab, so having a pile of lovely skies to choose from is a real treat.

There’s a lot of other tweaks. Nicer reflections and light flares, more realistic weather conditions (the raindrops are lovely), and better road textures. You can even grab add-ons for it, linked on the steam page, to make nights darker and support unofficial maps. It’s an easy fix to make your game a whole lot prettier. Take a peep.

Trucks are basically mobile living rooms and bedrooms, so customising your cab is important for your comfort. Clutter makes space feel like home, and SiSL's Mega Pack adds over 400 items to craft your cabin.

The usual flags and fuzzy dice are here, in several colours and shapes. But for me, it’s the small details that make it work—the packet of gum, the tissue box, the tiny Xmas tree. You can even add a life-sized Rey Skywalker in the other chair, should you wish to use the Force on other drivers. 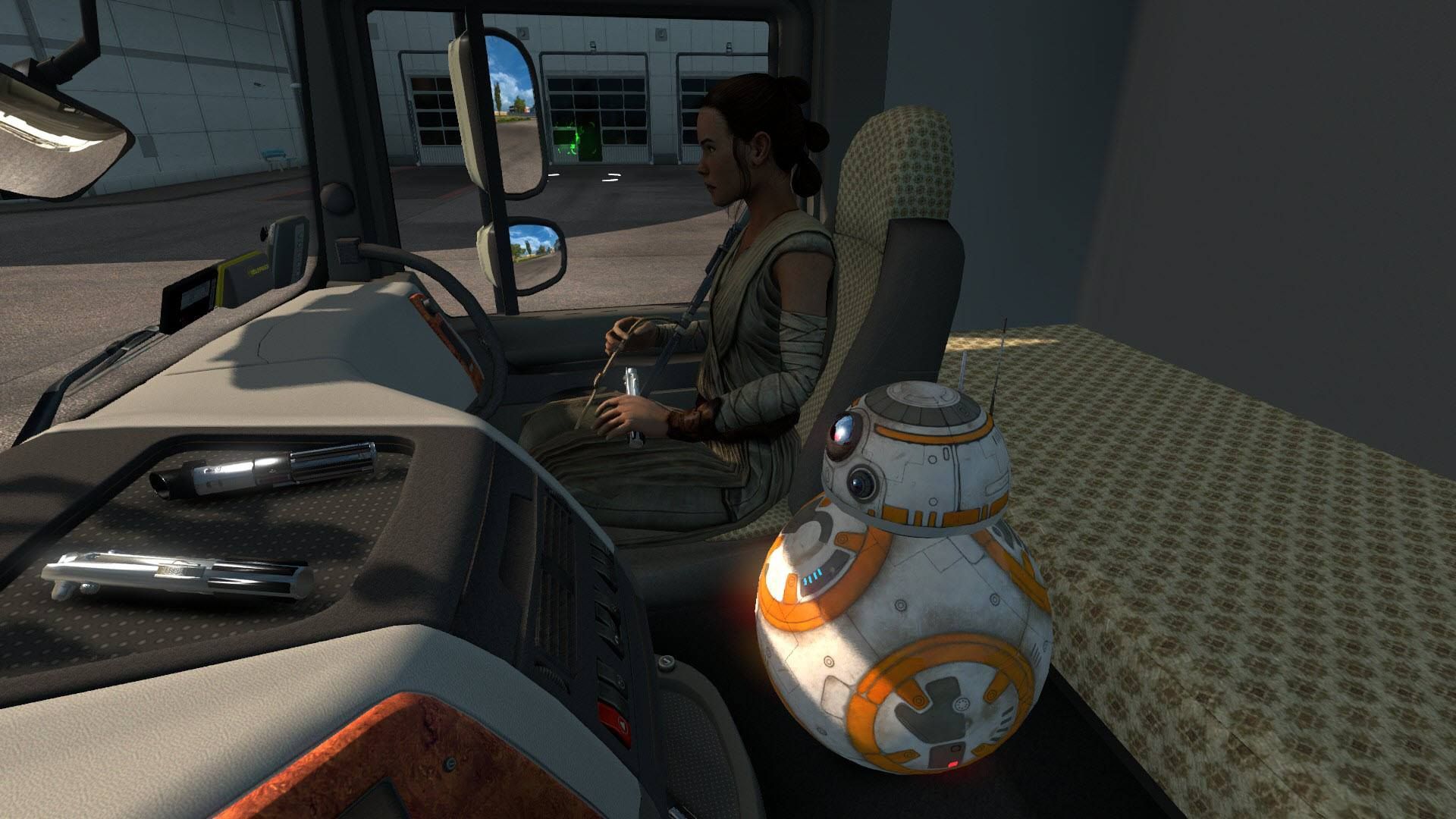 Another mod from SiSL. It’s just a tweak that modernises the UI a little, making all the menus flat and, IMHO, nicer on the eye. That’s it. That’s the mod. 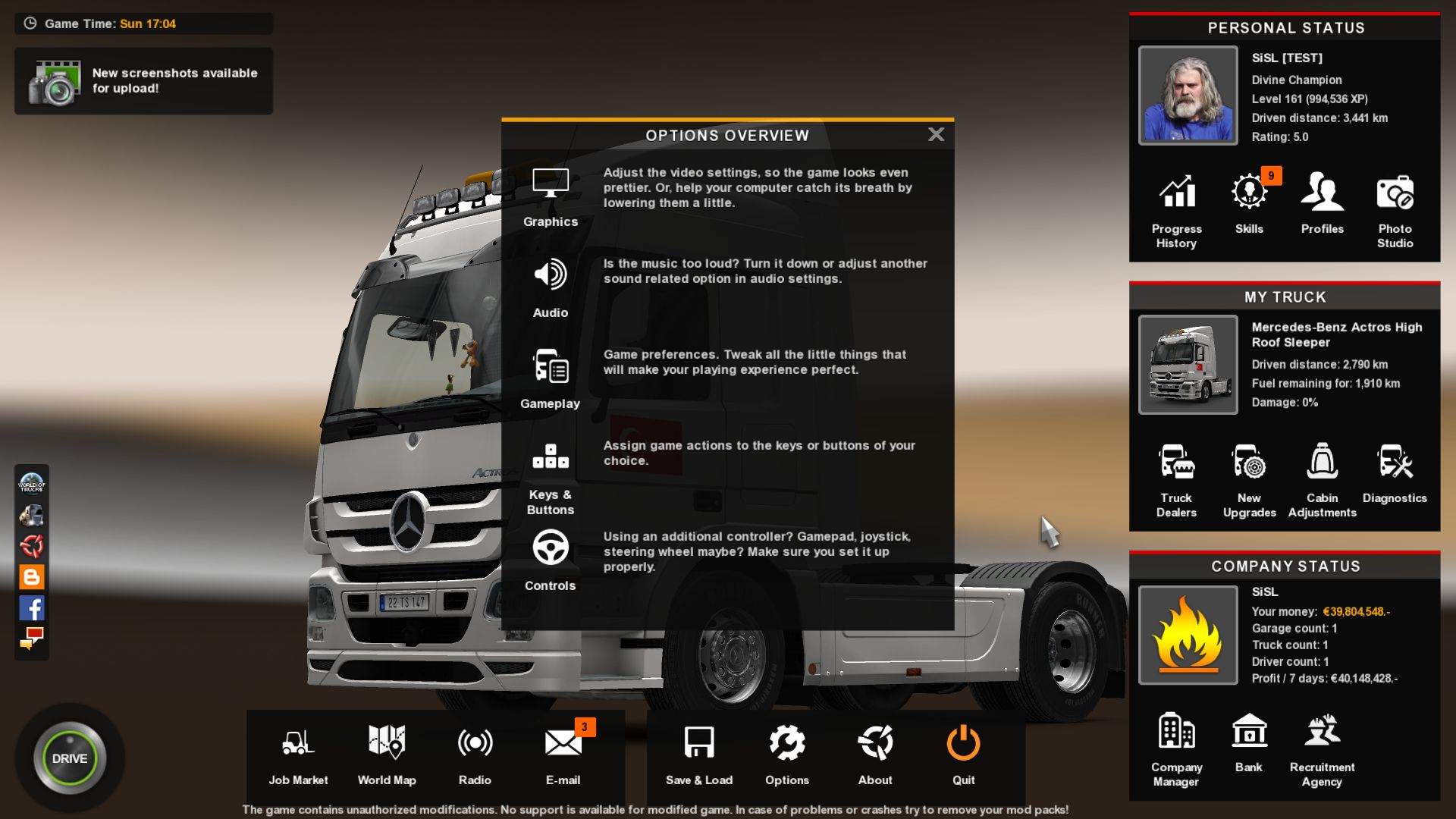 Jazzycat is a bit of an elder statesperson of truck modding. They have many, many packs out there. Their AI Traffic Pack was first released in 2014 and updated as recently as November 2020, and brings 454 new AI cars.

With this installed, the roads aren’t busier, just more diverse, and more realistic as the cars and skins are all drawn from the real world. You’ll spot Mini Coopers, Rolls Royces, and Hondas all trawling along the highways as you drag your wares hither and thither. There’s enough in there to play a game of car bingo as you drive.

Dealing with other drivers is a necessary evil in a trucking sim. The base of the game can be a tad bland to deal with, which is why Real Traffic Density exists. It alters the numbers of vehicles on the road.

With it installed, traffic will hew more closely to real-world numbers and at the correct times of the day. So you’ll deal with choked cities during the daytime but cruise quietly along midnight roads if you’re into night trucking. It also separates out a lot of the types of vehicles into their own spawn groups, and let emergency vehicles and the occasional sports car driver break the speed limit. 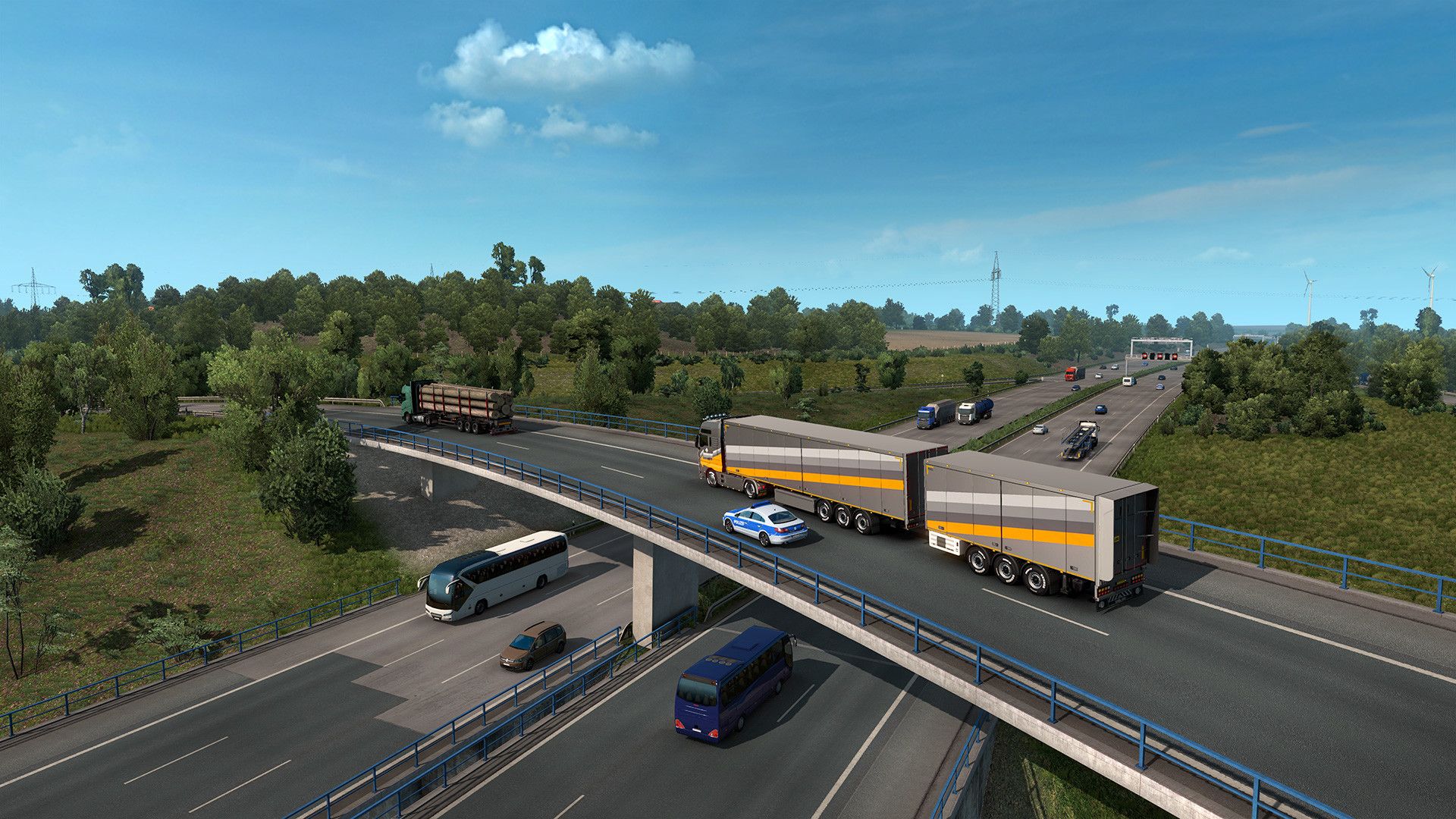 This one will change the way you drive. Realistic Truck Physics is a complete overhaul of the driving physics. I’m not a trucker (I’m a fighter), but until I played around with this, I did flip my cab quite a lot. With it installed, more aggressive driving is required to mess things up.

It changes suspension, cab shake, braking, the active roll control, and reduces the roll angle to help the likes of me to keep my truck off its side. It’s a mod that requires some tweaks, either using the in-game console or applying them to a config. Instructions are here.

To further enhance the feeling of immersion, you could also install Real European Gas Stations Reloaded, meaning all those pitstops on the petrol forecourts take place in branded petrol stations. If for some reason, you’re a fan of BP, Shell, Esso, and the others, you’ll find them waiting for you, full of fuel and charcoal briquettes. 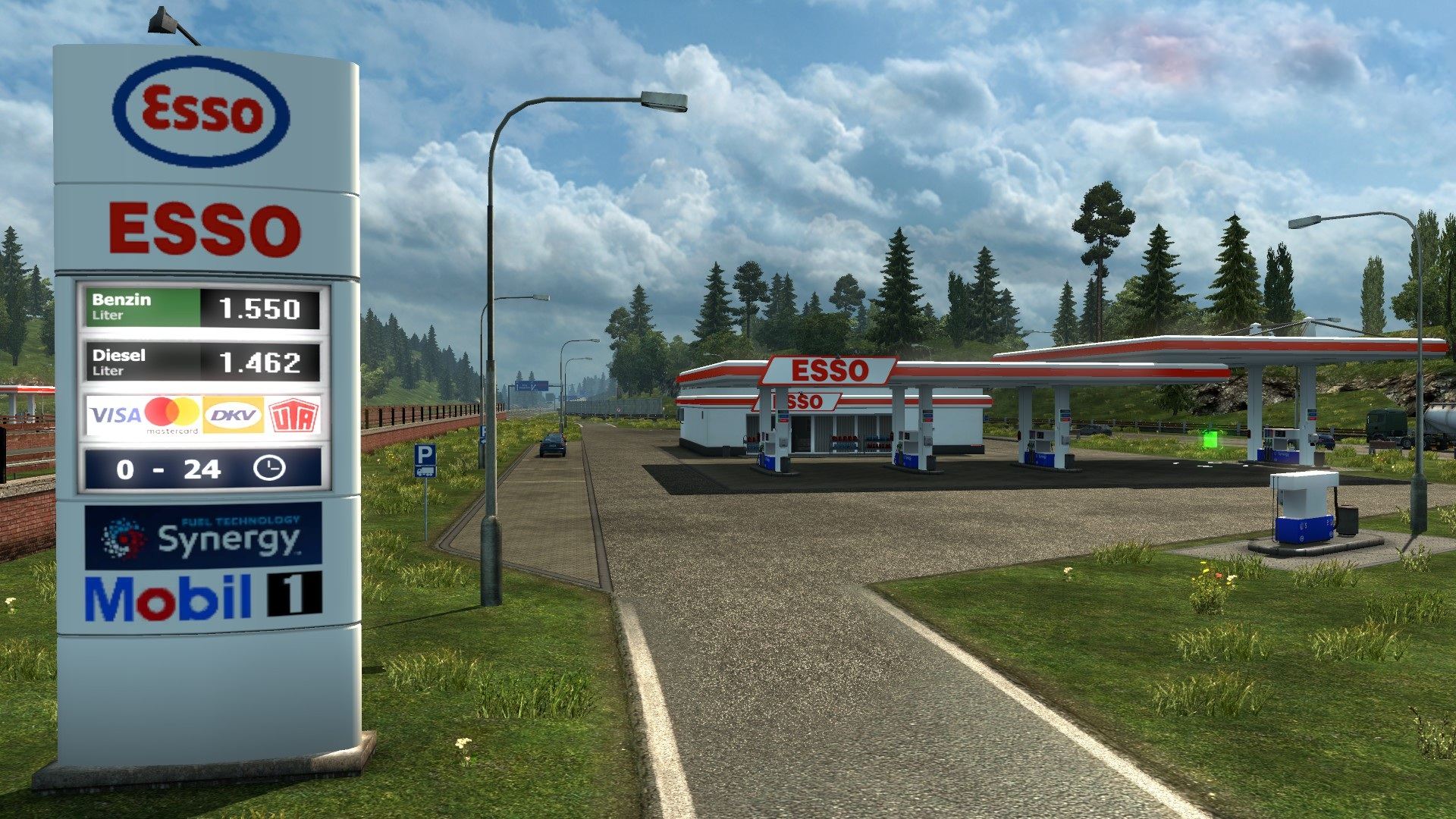 This is a fascinating addition to the game. Real Fuel Prices will update every Tuesday with the latest real-life fuel costs in every country. It’s not needed for anything other than an extreme addiction to immersion, but I like the dedication it takes from the creator. 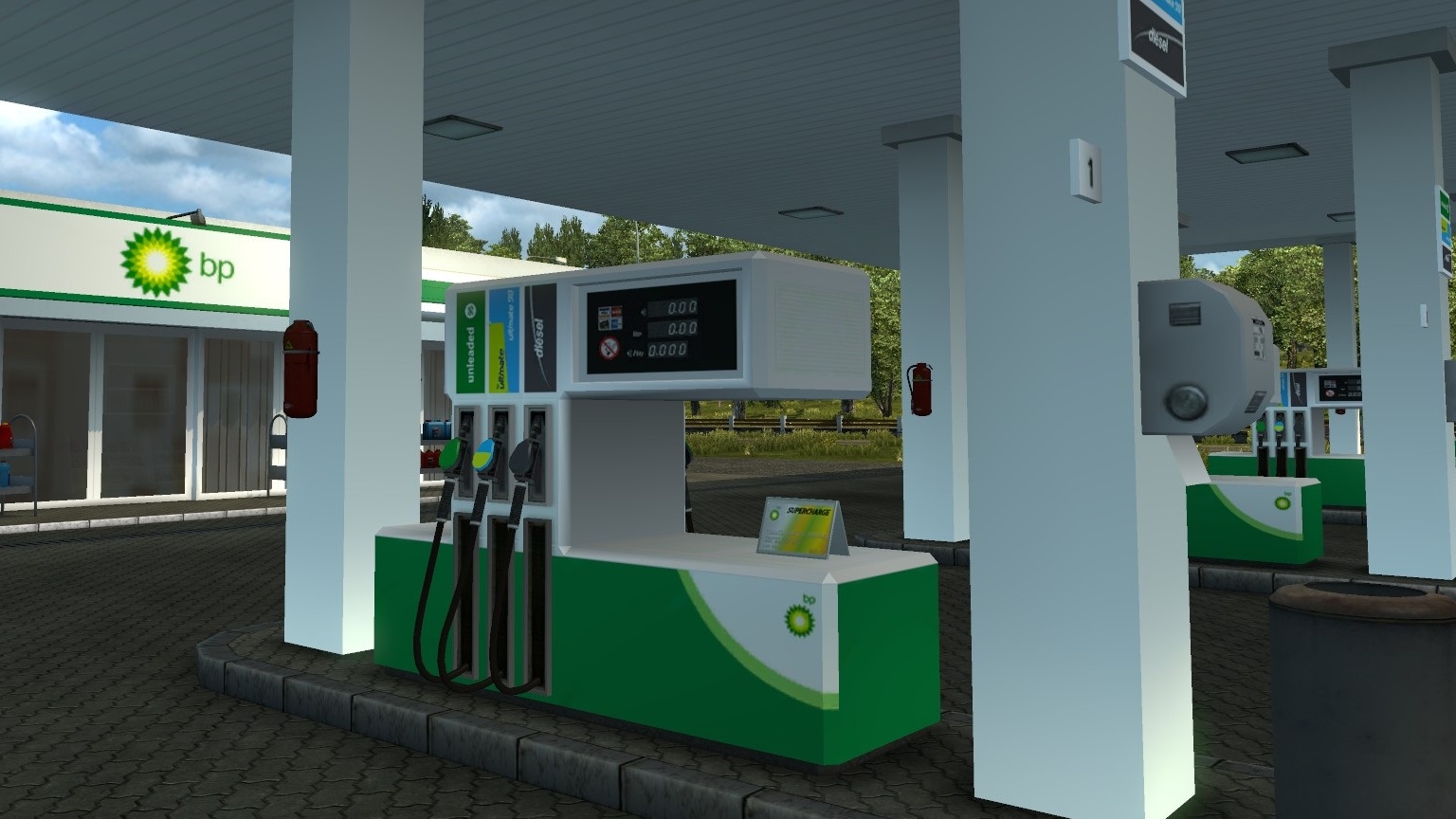 Here’s that word again: “immersion”. This might feel a little bit extreme, but Real Advertisements yanks all the in-game advertisements out and replaces them with real-world counterparts. It’s been structured in such a way that all the ads are placed in their correct language and countries. There are 269 ads, advertising perfume, burgers, shoes, and local treats. 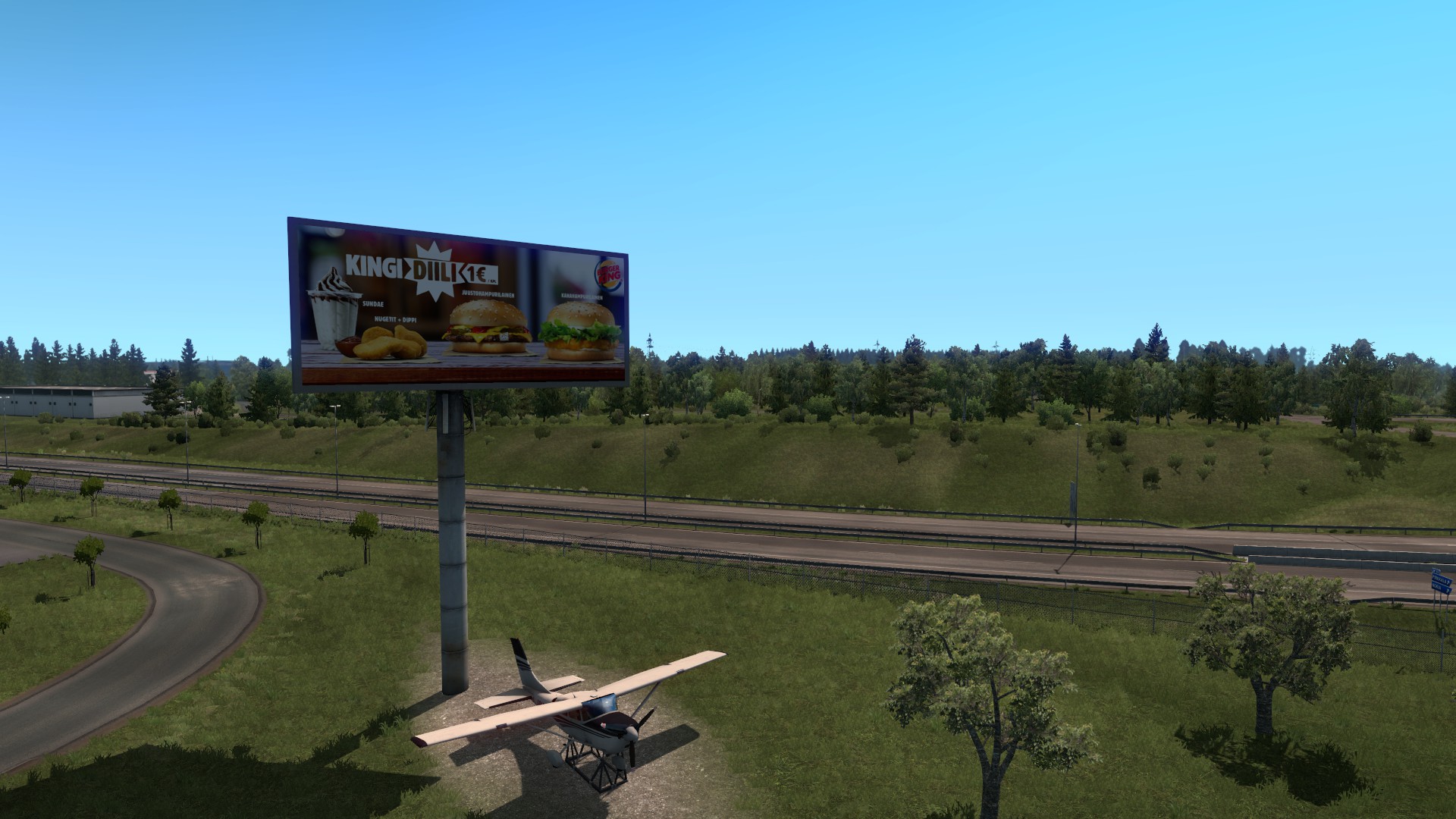