Grace Bruxner almost delayed the release of her latest game, The Haunted Island, a Frog Detective Game, which is a cute adventure about a frog trying to find a ghost. But then she changed her mind because she wanted to make sure it released near Hitman 2. Close enough that news stories mentioning both would be on gaming sites at the same time.

"Like, it'll be an article about Hitman and then an article about Frog Detective and that's really satisfying to me, to be mentioned with Hitman," she says, laughing. "Because they're such similar games!"

She's joking, but aren't they? Bruxner's games, whether The Haunted Island or earlier works like The Fish Market and Alien Caseno, are about poking around 3D spaces full of interesting details just like you do in Hitman's Sapienza. Sure, in one game you're doing that to set up an ironic murder involving emetic poison, while in the others you're looking for creatures with boggle eyes to be charmed by, but there's common ground.

Enough about Hitman. We're here to talk about Grace Bruxner's creations, the tiny worlds in which she has specialised since The Fish Market (which you may remember from an appearance in Free Loaders a few years ago). An underwater town square where charming animals sell their wares with misspelled signs, it's occupied by characters like an octopus hawking SOSEGS and a crayfish selling ROCKS 4 U. 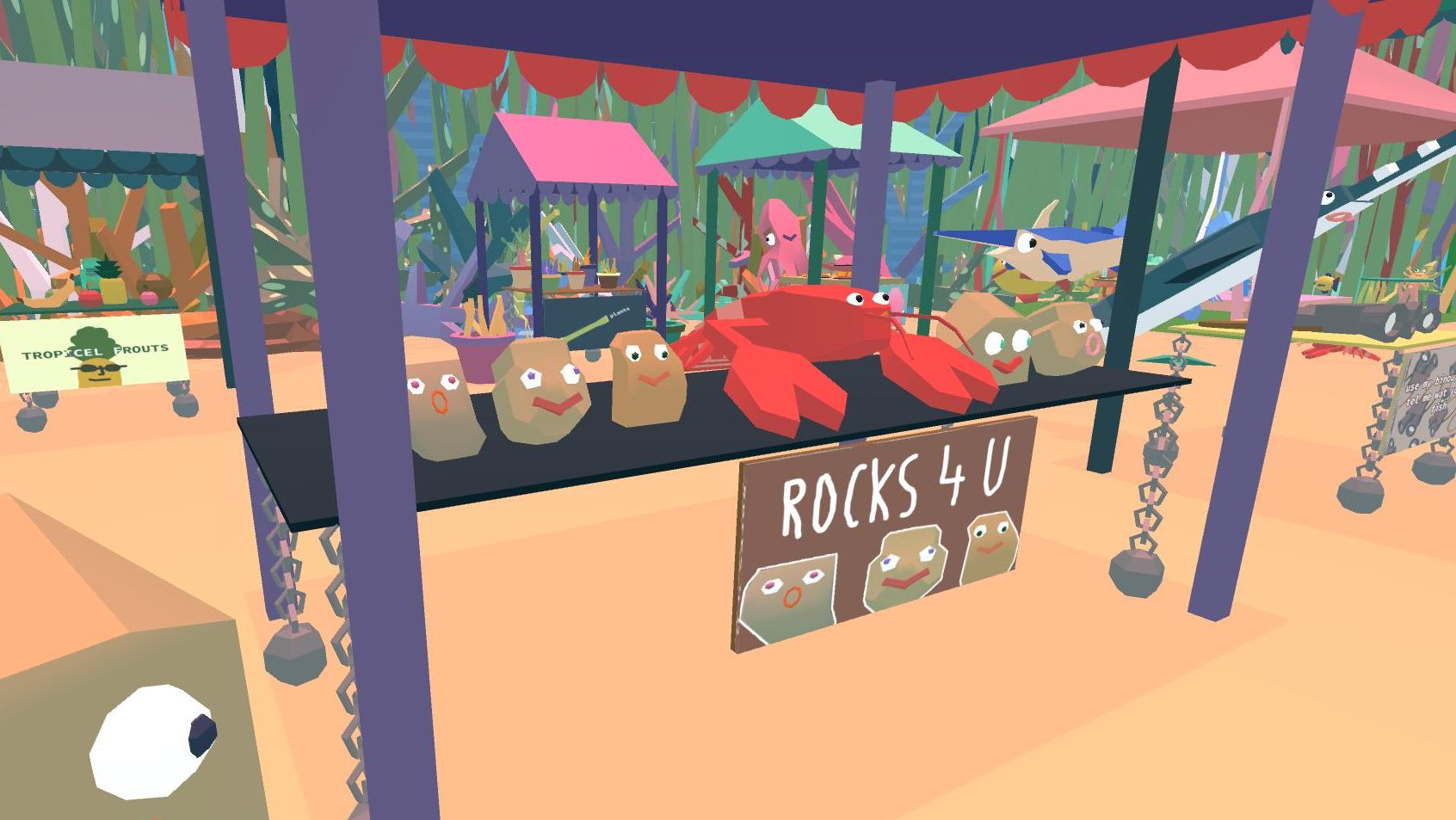 The Fish Market, and Bruxner's follow-up Alien Caseno, aren't the kind of games where you “do” much. They're about exploring, poking into nooks and crannies and smiling at the friends you find. Normally we reduce games down to basic verbs like 'jump over' and 'talk to' and 'attack'. The verb in Bruxner's games is 'be delighted by'.

"I liked games as a way to force people to look at my work," she says. "I used to do a lot of 2D illustration but what frustrated me with it is you can just show someone a drawing that you've done and they can look at it for two seconds and be 'oh, that's nice', but if you make a game you're forcing someone to look at your work for a long time."

Alien Caseno is another game about just being in a joyful place, only here it's a facsimile of a casino designed by confused aliens who have an enthusiastically incorrect grasp of Earth customs. They dance and eat and play the popular card game 'plonker', as fascinated by Earth habits as we the players are by aliens with three eyes or elongated necks. 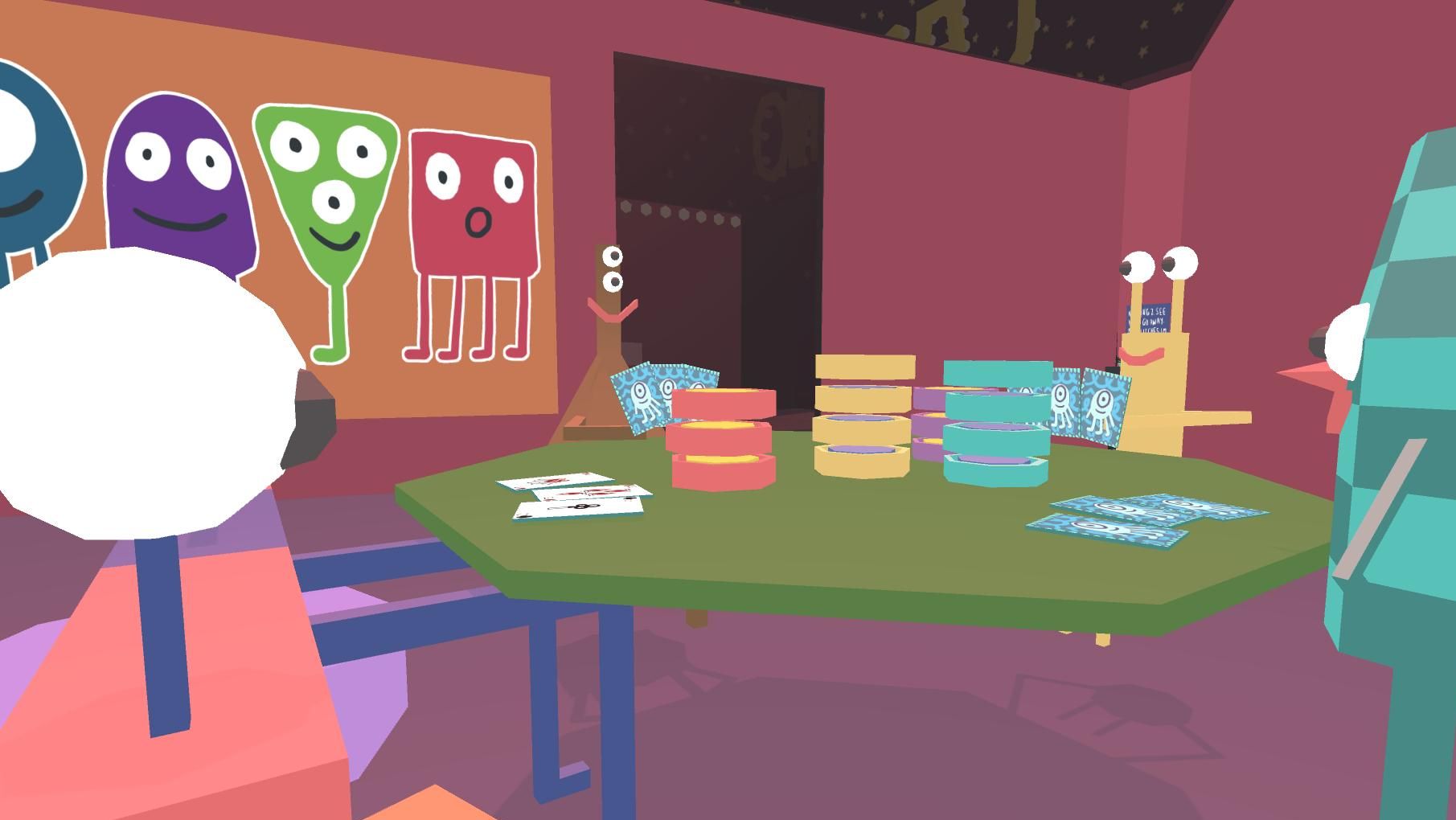 Bruxner isn't a fan of the term 'walking simulator', preferring to think of her games as dioramas or museums. They do have something of the museum about them, encouraging a meander from place to place where you poke your head into each area with eyes wide. They've even been shown in exhibitions, which seems a natural fit.

"You couldn't really show them at PAX," says Bruxner, "because the audience there is more likely to be, 'Why can't I blow this casino up?' But in museums I think people are more likely to treat the game with respect and realise it's not a game in the same way they're used to. I think there's a lot of interesting ways to curate games that aren't shooters — there's also bad ways to exhibit games like mine that encourage people to compare them to more traditional games, where museums and exhibition spaces have a different atmosphere that encourages more critical thought and more appreciation for them." 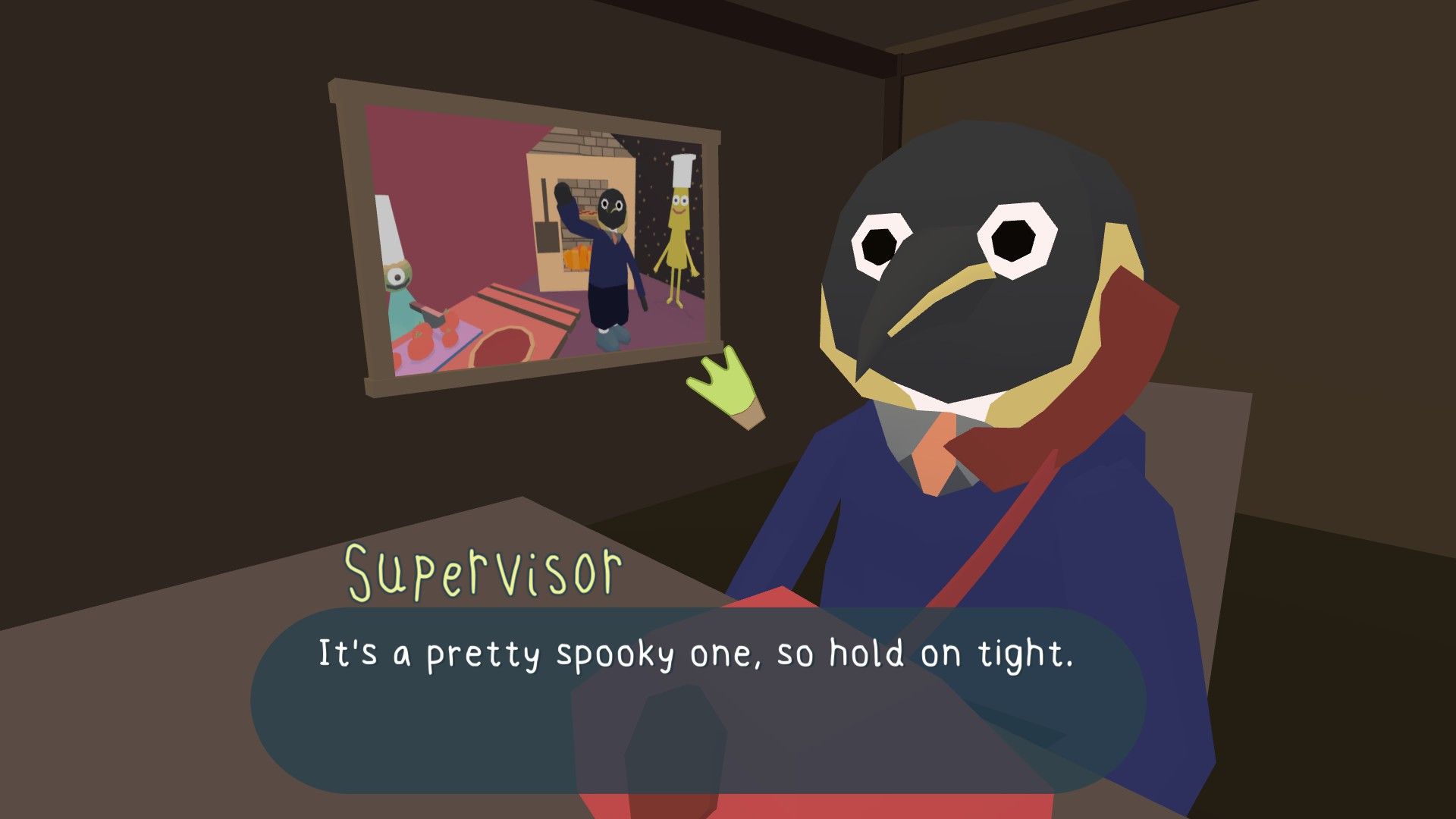 Though 'blowing up a casino' obviously wasn't on the cards, Bruxner did want to find a way to add interaction to her diorama-style games to prevent them from becoming "stale" as she puts it. She spent a year working on games with varying structures to find what suited. In the end, dialogue trees, the ability to pick things up, and "little, funny interactions" were the ones she enjoyed.

"More complex mechanics and systems I wasn't interested in, but at least I had experimented with them and realised I didn't like them. It came to a point where I'd picked a bunch of mechanics and systems that I liked and was happy to put in my games, but combined it with the kind of joyous character design and world design that I'd done before and smooshed them together to make Frog Detective." 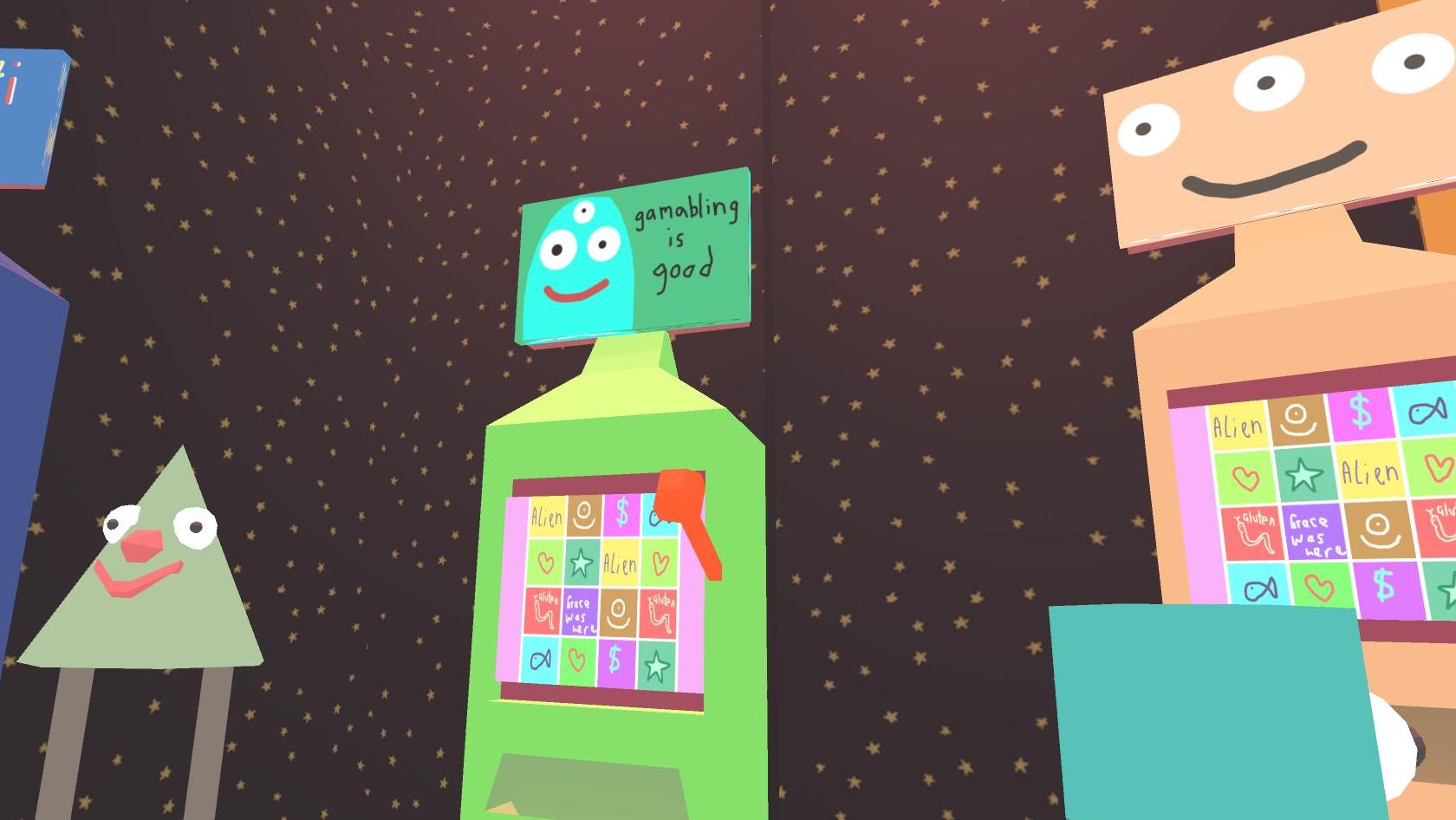 Bruxner is a fan of frogs and of Agatha Christie's Poirot (she sent the Poirot theme music to composer Dan Golding and asked him to write something like it for the game, but not close enough they'd get sued). Once she settled on a frog protagonist it made sense for all the characters to be animals, because as soon as you get in situations where humans and talking animals are sharing a space, it's just weird.

Then it was time to write the dialogue. But how to write a cast of animal people including a wombat and a sloth? Bruxner treated each of them as an aspect of herself.

"A lot of them are quite anxious characters, a lot of them are nervous, or too confident, or suspicious, and I had to look for parts of my personality that aren't necessarily the most positive parts and wrote them from the perspective of the detective who's quite a logical character challenging them on those neuroses. But never in a negative way or a way that's judging that character. 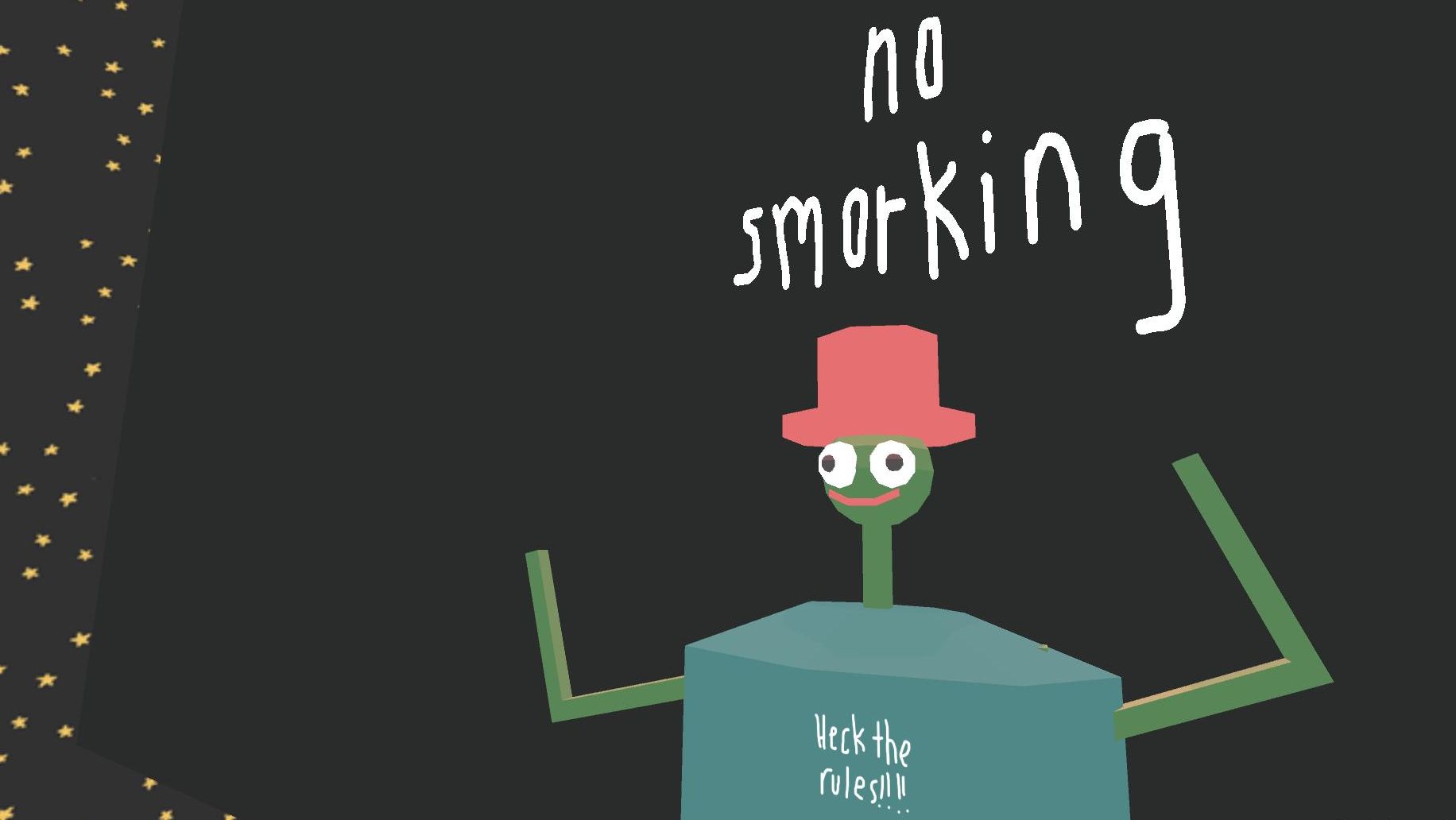 “For example, Martin the sloth is super anxious and is also convinced that there's a ghost even though there's basically no evidence. He read half a book and decided that there was a ghost and the detective's there trying to calm him down and negotiate with him a bit. That's the parts of my personality which are unreasonable or neurotic being challenged by a very logical thought process."

A lot of detective fiction is about an outsider whooshing into a social group like trench coat Mary Poppins and analysing them to bits, but The Haunted Island does that with Bruxner's light touch and sense of the absurd.

"There's never going to be any super dark themes in any of the frog detective games," she says. "The detective isn't going to solve a murder. It's not going to go that far, but it's funny to have a noir theme and a detective theme when nothing really is going wrong ever, and to solve a mystery where everything is just fine. Because the game isn't really about solving a mystery, it's about making friends." 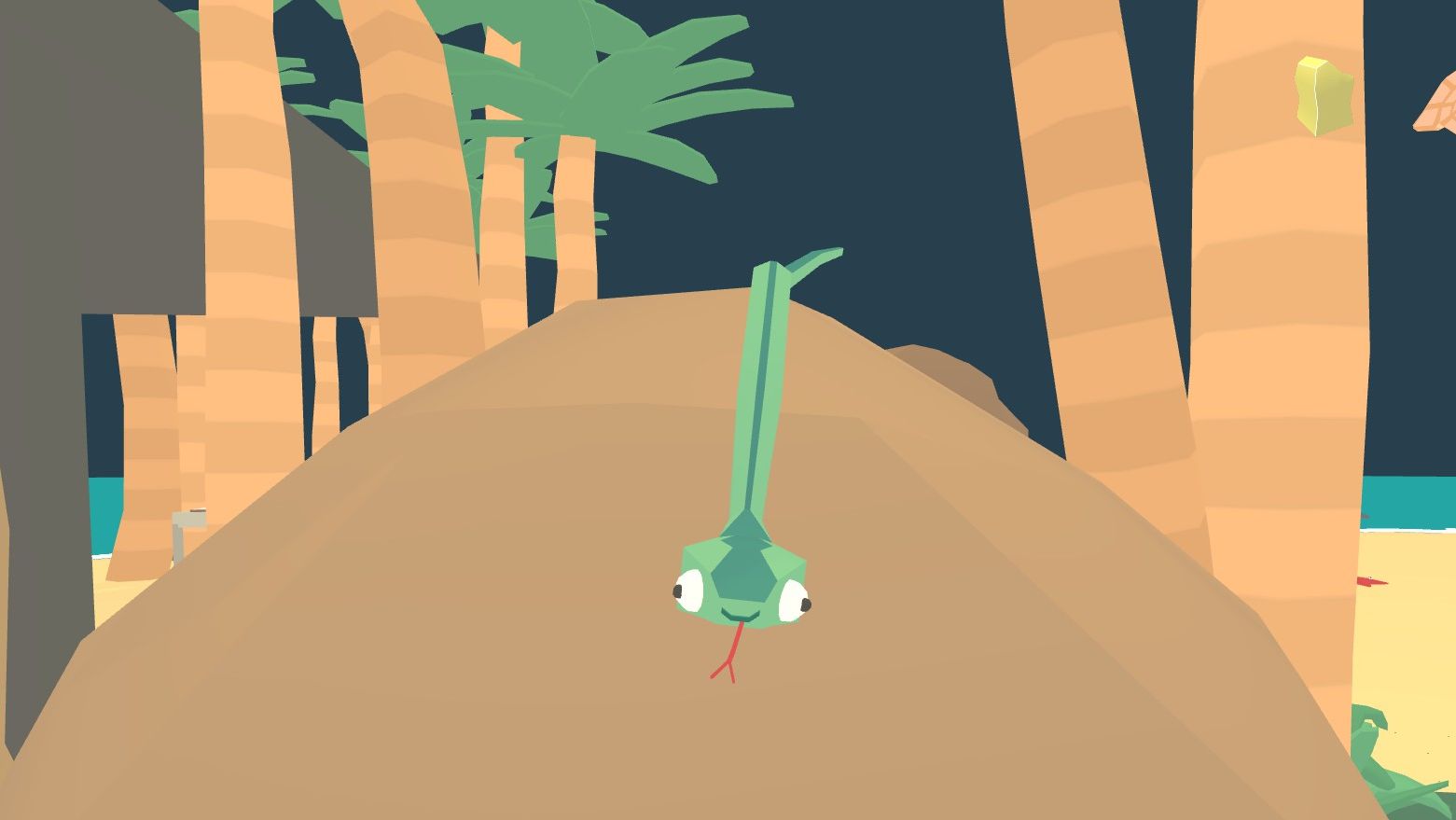 The Haunted Island has been nominated for an IGF Award in the student category, which is nice because it's basically the only category in which Return of the Obra Dinn isn't competing. Bruxner had made a point of not telling people she was a student before now (she graduated at the end of last year, submitting The Haunted Island as her final assignment) because "I realized at the end of my first year when I introduced myself to people as a student they weren't giving me the time of day." Not all of her games have been hits with her teachers.

"I definitely got some bad marks for certain things," she says. "I made Snail Wisdom Simulator, which is a game where you press space and a snail gives you an emoji in response to a question that you ask it out loud. I think I got maybe 60 out of 100 or something not great for that. I was mad because that game's a masterpiece." 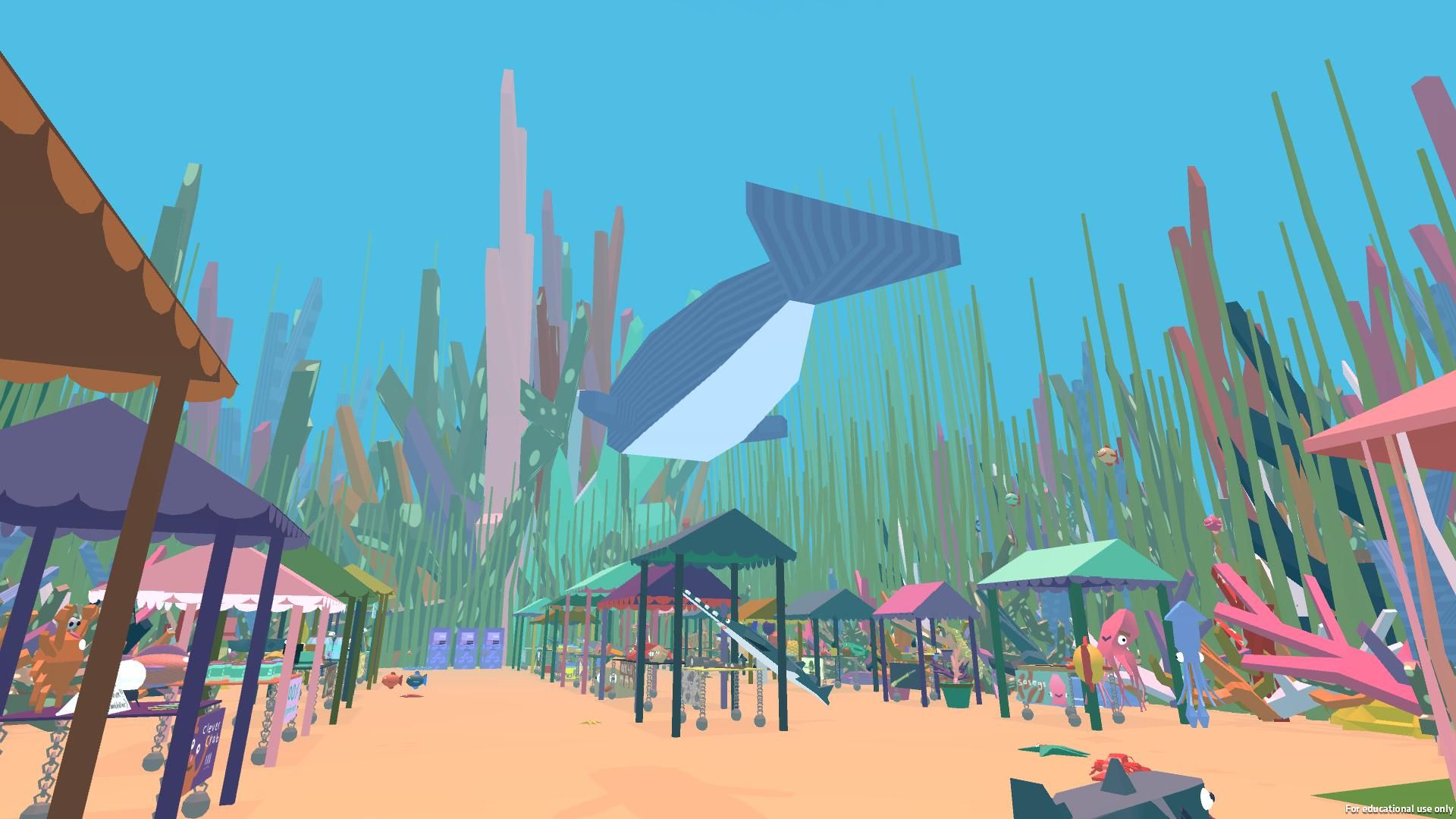 But there was potentially an even more judgemental reaction waiting for The Haunted Island, Bruxner's first game released on Steam: a larger and often more hostile audience than that on itch.io.

"I was terrified of putting the game on Steam," she says, "because it's a short game and you don't do much and it was also very public that it was being made by a woman, which can be a little bit dangerous. I think the game only has three negative reviews or something when I suspected the game would come out and the reviews would be mixed. I was really shocked by that. It's nice to know that it resonated with people."

The Haunted Island ends with a note that the frog detective will return in The Case of the Invisible Wizard, which Bruxner insists is no joke. There's also a lower-case note on her Itch.io page: "i made these and i'll make more", which reads as much like a threat as a promise. I certainly hope it's true because I could do with more games that evoke pure delight like these. And perhaps with her next release Bruxner will live up to her dream of making something as funny as Hitman 2. 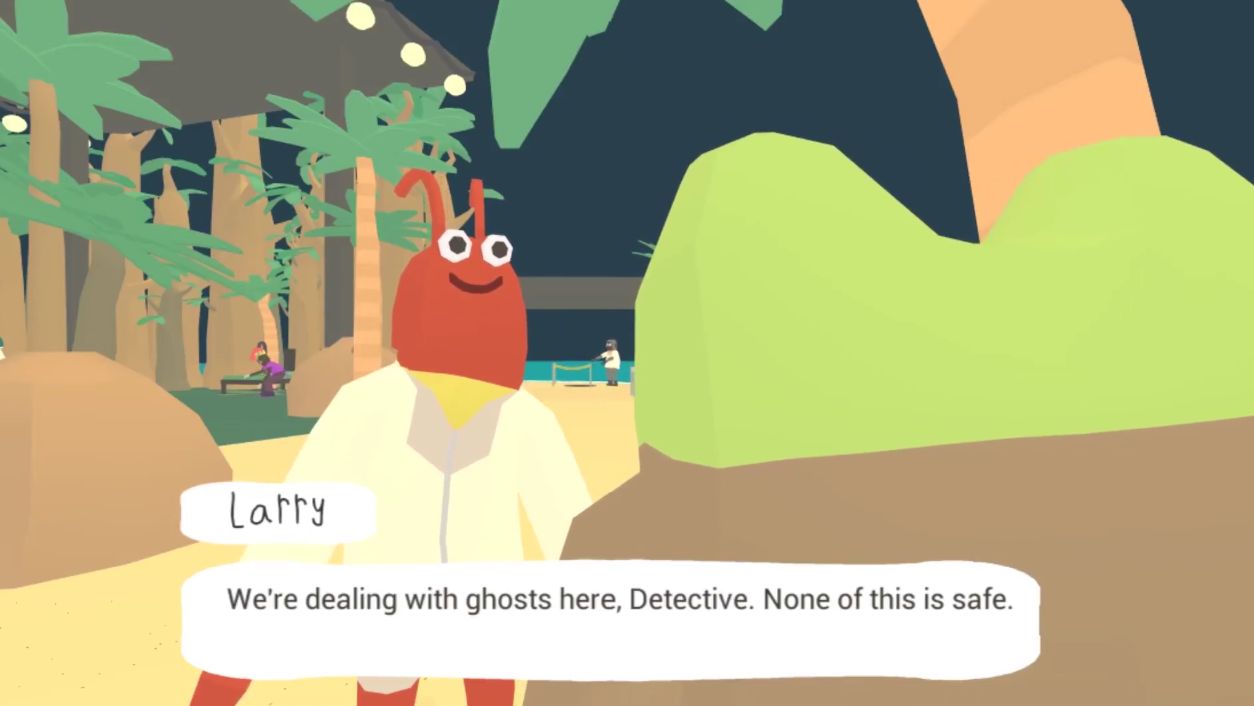 "It's way funnier than my game," she says of the game about a man who drowns people in toilets, "because everything you do is congratulated and treated very seriously. So when you do a really terrible kill Diana is like, 'Well done, 47!'

“With The Haunted Island I wanted to take some of that. Everyone is taking the detective very seriously even though the detective is a very silly character. The situation is silly but everyone's taking it seriously. Just like in Hitman."