In most cases, driving, and this is true of both real life and games, is about the act of getting from point A to point B with your car. It’s about doing it efficiently, safely, and in as little time as possible. In games, your vehicle of choice might be a car with a jet engine under the hood and even a drive from place to place might be somewhat risky, but the point remains - just get from here to there, usually before your rivals.

One of Burnout Paradise’s greatest achievements is allowing you to do something else entirely. You can, and are encouraged to, just get behind the wheel and drive, without enemies, timers, or competition.

Racing is the means of progression through the game, but that progression is, for the most part, about getting new shiny toys. Different cars that look a bulkier or more aerodynamic or have speed lines to make then go faster, but that’s it, really. The game is not about racing - it’s about cruising. 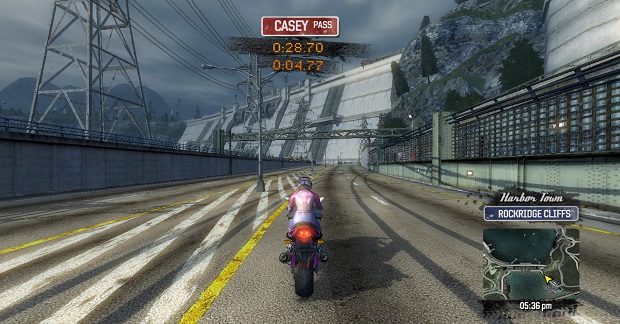 And the game is built to allow this. The roads are wide and often only curve slightly, there’s no punishment for crashing, and the game never calls you out for not racing. The game’s bikes offer an even ‘cleaner’ experience than the cars - there are no races, just checkpointed nature trails around landmarks. The perfect setting for cruising.

I’ve spent about 30 hours in Burnout Paradise - in the process of writing this article, I was driving around in the game and found a new area. The Lone Peaks Stock Car Track sits towards the southwest, and is a small figure 8 track that’s pretty easy to speed around.

I had never found it before. Perhaps I had never paid enough attention while driving along the road it sits on, or maybe I had seen it but had completely forgotten it exists. I spent a good 15 minutes just circling around it - not for a challenge, but because it was just fun to be driving around a simple pattern.

There was no goal here. I had no aims when exploring the city or the countryside either. Sometimes I might turn off to see if I can make a jump or find out where a road I don’t typically use leads, but other times I’ll just keep going. Add in the fact that I’ll be playing my own soundtrack in the background, and it’s a perfect getaway.

In-between these paragraphs I’ve been going back to play a little more. Not to remind myself, but because it’s a great way to think. Paradise City isn’t the most beautiful game location, nor is it the most impressive, but it’s now the one I know best. I’ve spent more hours driving in Paradise City than any other location, real or virtual. I know it now, all of its landmarks and people.

Why do I play Burnout Paradise? Because I haven’t just fallen in love with racing here, but with the driving. With just moving, with its roads and corners and secret tunnels, with cruising along.