Even after peeling away the shell of nostalgia, Chrono Trigger is a truly classic JRPG, so it's understandable that people were a bit miffed when the recent PC release of the game was a messy port of the Android edition of the game with no shortage of technical issues. Today, it received its first major patch, which goes a long way to getting the game back on track.

The improvements begin right at the title screen in this new update, with the classic Chrono Trigger logo and ticking pendulum on the title screen restored to something approaching the SNES original. Previously, they had somehow managed to knock the pendulum's audio out of sync with the animation, not exactly the greatest of omens for a game about controlling time itself. They've also restored the Playstation version's anime intro to its correct place, which is nice.

Starting the game, players will be presented with a choice - filtered 'HD' sprites (which look smudged and create much more visible seams between background tiles) and the new 'Original' style (as seen in the screenshots above and below), which retains the nice chunky pixel-art of the original game. It's still not exactly as you remember on the SNES - there are some new transparency effects, and the game renders in native widescreen - but they seem to be keeping the improvements while shedding the poor decisions. 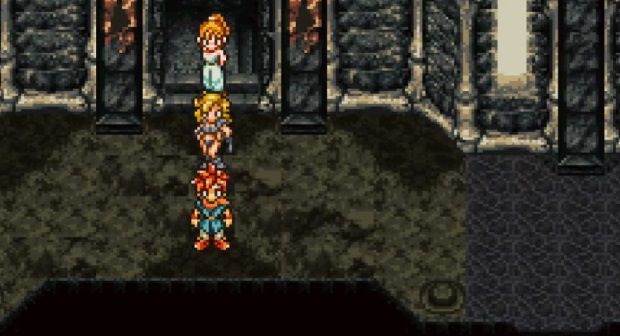 Another improvement is the fonts used. They're closer to the original, although still not quite there yet and still a little hard to parse in some menus. They've tried to listen to criticism and add some subtle drop-shadowing to the more pixelly text, but it doesn't completely match the originals at present. They've also somewhat improved the look of text entry boxes, which looked impressively bad in the initial release version. You can see the full patch notes here, along with some before/after shots comparing the two visual styles.

The main issue remaining is the interface, which still looks and feels a lot like it belongs on a touchscreen device. Fortunately, Square promise that their second update for the game will be focused on improving the UI, with modes specific for keyboard and controller play, with the current mouse/tablet-centric UI being relegated to a secondary (and presumably seldom-chosen) option.

Chrono Trigger is out on Steam now for £11/$15. If they keep these updates coming, it might just be worth playing on PC over the alternatives instead of just tracking down the SNES or DS version.