You might not be surprised to learn that Wilmot’s Warehouse, the charming object-categorisation game we’ve been banging on about this month, was inspired by (wait for it) working in a warehouse. Co-creator Richard Hogg worked in warehouses for Asda and Boots in his teens, before moving on to work for a film stills library after graduating. “I loved that job,” he recalls, wistfully. “In fact, if it hadn’t been for a bunch of bastards from [name of professional services firm redacted] coming in and deciding I was surplus to requirements, there’s good odds I’d still be there.”

This brief anecdote, in itself, explains a lot about the game. But when asked why he liked warehouse jobs so much, Hogg makes it even more clear.

“You had to become fluent in this space where stuff lives, and which is always changing. It’s a space you’re intimate with, and it can start to feel like a game in itself. I used to cycle to Asda in the evening, thinking about how I’d get all the dog food from the warehouse to the floor as quickly as possible. I’d even time myself. That’s the sort of thing you get into, if you like those jobs.” 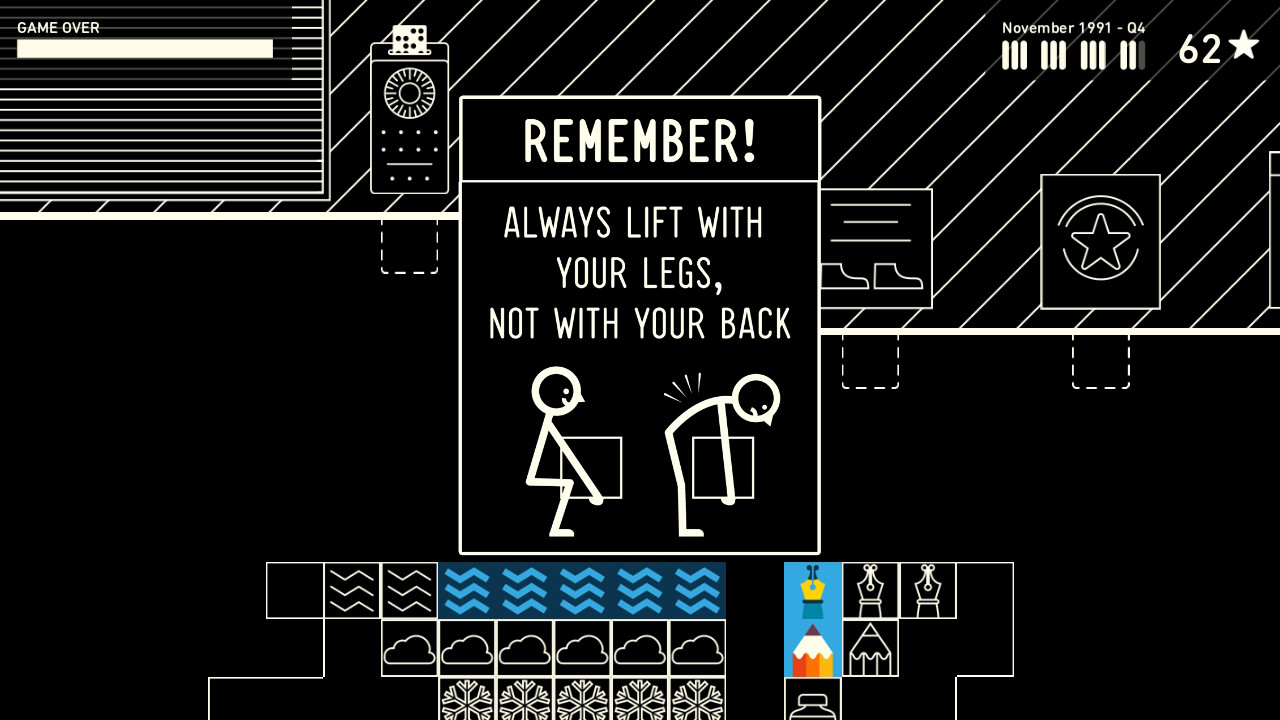 If the experience of playing Wilmot could be boiled down to one concept, it would be that of becoming “fluent in a space”. Indeed, our own Matt Cox went so far as to argue its status as a language game. But it’s also a game about moving dog food (or at least dog bowls - or are they saucers?) really quickly. It’s many things, to many people.

But it nearly wasn’t anything. In fact, Wilmot’s Warehouse only exists thanks to a near-Dickensian Christmas change of heart by Ricky Haggett, the game’s other co-creator, and Hogg’s game-making partner of twelve years. While Hogg has never been a keen programmer, coming into game design from the art side, Haggett has been the more technical side of the partnership, hailing from a background working in mobile games.

Perhaps because of this, he was not a fan of the original concept for the ‘Warehouse Game’, which Hogg had been floating for some years, and which he envisioned - potentially - as a sort of Candy Crush-style Match Three game.

“I’d take the piss out of it,” he admits. “I just couldn’t see the appeal - or at least I didn’t want to spend time working on it.”

It became a bit of a running gag. During Haggett and Hogg’s work together on freeform snake 'em up Hohokum, their publishers at Sony’s Santa Monica division even got in on the joke, referring to it as “Dick’s Clown Warehouse Idea”.

“I was being bullied,” says Hogg in mock outrage, as Haggett laughs beside him. “Kept in my art corner. I don’t know where the clown concept came from, but it was relentless. Every single thing I’d say… I’d suggest the idea of delivery lorries, and Nathan from Sony would say ‘nice - will all the doors fall off’. It was shocking.”

Once Hohokum was done with, Hogg - who was feeling burnt out - took a break from game making for a while, while Haggett spent his time working on card-based roguelike Loot Rascals. But during this 18-month stretch in the wilderness, Hogg found his pen hand itching.

“I suppose I started making Wilmot, in a weird way. I didn’t know what you needed to do, technologically speaking, to make a game. So I just started drawing all the tiles that would eventually become Wilmot’s stock. I didn’t really know what I was making this stuff for, to be honest. I just wanted to build up this library of tiles with potential organisational relationships between them.”

Haggett spoke with his illustrator friend, and was intrigued. As far as he knew, Hogg was still thinking of making a Match Three game, which he didn’t want to do, but the tiles certainly looked interesting.

“I got Dick to make a document with all the tiles in, and suggested he send it to other designers. But he didn’t.”

“I was a bit frightened,” says Hogg.

Then came Christmas of 2016. Haggett went away for the holidays with his laptop, and with a little time on his hands, felt himself craving a side project. By the sounds of it, he surprised himself with what he did next.

“I had all those lovely icons Dick had made, and I wanted to do something with them… suddenly, I was making this warehouse game. You were a little cursor, shuffling the blocks around.”

The game that had been a running joke was suddenly real; it was a true Christmas miracle. And Hogg couldn’t have been happier.

“It was such a touching surprise,” he remembers. “He hadn’t wanted to make it at all and then… there it was. And while we knew we had work coming up - we were gonna start on the project we’re deep into now, in fact - there were going to be seven months before that happened. And so we decided to make what became Wilmot.”

Composer Eli Rainsberry came on board shortly after that, and with the visuals and the music style set, something like the Wilmot we know today began to take shape. But it went through many, many iterations before it became what it is now. Even the Humble Bundle version of Wilmot, released in 2017, was a very different game to what came out in August of this year.

“We tried procedural warehouses,” says Hogg. “We tried letting the player write big labels on the floor. We tried a lot of things”.

As I suspected in our Wilmot's Warehouse review, many aspects of the game went through an excruciating number of variable states before ending up in their final form. Indeed, listening to Haggett and Hogg talk, the game’s development process sounds a bit like the movie Edge of Tomorrow, where Tom Cruise has to fight the same battle against alien baddies time after time, getting a tiny bit more efficient each time he dies. Haggett says the hardest thing to get right was the scaling.

“You’ve only got one play space, so how do you make it fun and interesting when there’s nothing in the warehouse? Equally, as the place gets more and more full, how do you time the upgrades, the unlocking of new products, the numbers the customers ask for…”

As he trails off, I can almost hear the sound of many, many test sessions playing out behind his eyes.

Interestingly, one of the later developments to the game was the one that gave it its name.

“For a good while, all the moving and stacking was all being done by a disembodied cursor,” says Hogg, “and then the idea for a character came along - and there was Wilmot.”

With this stoic little square, the game found not just its design anchor, but its heart. A personified point of agency allowed Wilmot’s Warehouse to more readily access so many of Hogg’s own feelings about manual, therapeutic sorting work - and importantly, it allowed the game to become satirical.

“I hadn’t really considered that before you brought it up,” he says, when I suggest it. “But that’s exactly the case. It did allow us to make more of a statement, even if it was in a gentle way.”

Although the game’s commentary on labour politics is fairly light-hearted, it’s backed up by sincerely held feelings. Although some people have called Wilmot’s Warehouse an “Amazon Simulator”, its creators feel this is missing a crucial point.

“Companies like Amazon have removed the agency from the people who work in warehouses,” explains Hogg. “There’s no longer a joy to be had in optimising the layout, because a computer is doing it for you. All people have to do [in these situations] is run around to where they’re told. These jobs are demeaning and dehumanising, and people deserve better than that.”

Given the strength of Hogg and Haggett’s opinions, they say the game could have ended up being a lot darker, but that didn’t feel like the right direction. I ask them what Wilmot himself would say about it all.

“I think Wilmot loves his job,” says Hogg, after some thought. “But I’m not sure he loves the company he works for. I’m interested in the absurdity of the workplace, especially with regard to what you might call menial jobs - that real mismatch between how the company and perhaps the management sees itself, and how the workers do.”

Here, he cites the pep-talks that Wimot’s boss gives him, and the 'motivational posters' unlocked as ‘rewards’.

“A big inspiration was the Reginald Perrin books and TV Show. They express the absurdity of the workplace with a kind of wry gentle humour that felt really appropriate to the mood of Wilmot. While we were making the game [Perrin writer] David Nobbs died, so we decided to go all-in and make the boss an obvious representation of Perrin's boss CJ. As a tribute.”

While Wilmot’s Warehouse does end up having plenty to say about automation, then, it seems that for the most part, the game is a love letter to a slightly less brutal, slightly less dehumanising era of wage-drudgery. Or at least, a love letter to the creativity and ingenuity of the workers who lived in that era. Wistful once again, Hogg concludes:

“No one really wants to be there, but they’re doing their best to get something out of their life at work beyond just a paycheque. Be that camaraderie, having a laugh - or perhaps just making the job more interesting for themselves.”

May we all find ways to be more like Wilmot.