"If you're a ghost, and you walk through a wall..." asks Richard Hogg, in the tone of a man confronted with a real head-scratcher, "...do you get to see the inside of the wall?"

It's a good question. The kind which, for most people, might fuel a good half hour in a pub, or a 2am chat with a partner who can't sleep. But for Hogg and his long-term collaborator Ricky Haggett - who last year spun a thought about the simple pleasure of stacking shelves into the phenomenal Wilmot's Warehouse - it's a question worth writing a game about. That game is I Am Dead, and after watching Hogg and Haggett play for half an hour, it looks like exactly the tonic I need in the middle of this long, dark year.

We start by having a look inside some fruit. A cucumber vanishes in a thousand paper-thin increments, like an animation of slides from an MRI scan. We interpose ourselves in a lettuce, and its leaves rush past in a green flicker until a caterpillar is revealed sitting guiltily at its heart. Next to give up its secrets is a grapefruit tree, which was so lovely it requires a GIF to do it justice:

Everything in I Am Dead has an inside. Which shouldn't feel so weird, considering that's how physical objects tend to work. But in games, we're used to all things being hollow: big parcels of nothing, wrapped in the thinnest integument of texture, in an illusion that the smallest clipping error can shatter. So even though I Am Dead's world is bulbous and colourful, following the visual grammar of Hogg and Haggett's distinctive cartooning style, it has actual weight. It feels bizarrely, intrinsically solid.

The only thing with no heft to it, ironically, is the player character. He's called Morris, and he's a gentle, baffled sort of bloke in late middle age. He also happens to be dead, but that's nothing particularly frightening. Morris isn't out to avenge his killing, or even find out how he died - he's just hanging around his beloved home, the seaside town of Shelmerston, trying to figure out what to do next. Luckily, he is soon joined by his dog, Sparky.

Sparky is also dead, and as Haggett explains, "she's the one that actually understands death, or at least a bit better than Morris does". As luck would have it, Sparky can talk (she tells Morris not to go near the grapefruits, because "all dogs hate fruit"), and soon gets Morris's act together. She tells him that Shelmerston is about to get Pompeii'd by the volcano it's built around, and that Morris can't just loiter about looking at his old home - he's got to save it. 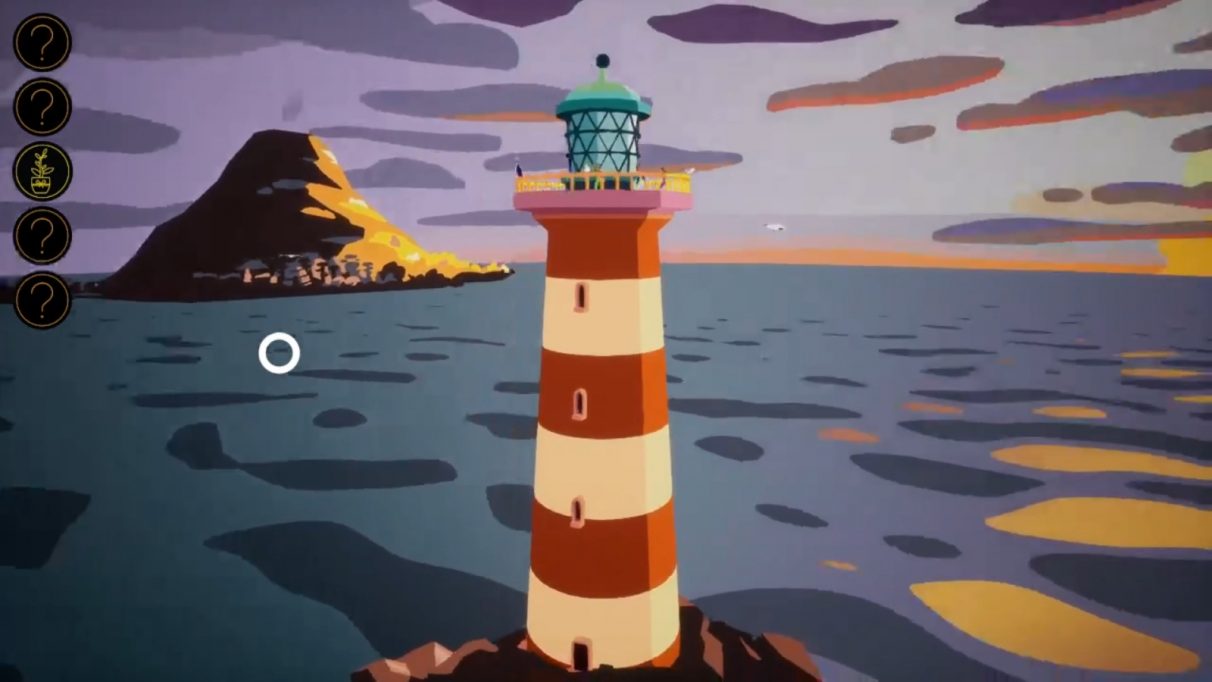 But how can Morris do that, when the living can't see him, and he can't interact with their world? Well, he might not be able to, but there's potentially someone who can. That someone is Ogden Beckett, also dead, and something of a local legend in Shelmerston. Everyone in the town has a story about this larger-than-life character, and Sparky reckons that if Morris can work out from these stories where they might be able to track down some mementos from Ogden's life, she can train her ghostly Jacobson's organ on his existential scent, and track him down to seek his help.

But how can Morris hear peoples' stories, if he can't speak to them? By going inside their heads and looking at their memories, of course. Doing so triggers a sort of minigame/cutscene hybrid, in which nudging controller triggers will bring a sequence of bizarrely distorted images into focus, while the NPC in question narrates their tale of Ogden. The patterns as the memories fall into line are beautiful, in a way that reminds you just how diluted the meaning of the word "psychedelic" has become:

The game is a treasure hunt, I suppose: you're poking around the minds and the matter of Shelmerston, looking for relics. Morris floats into the head of an amateur cricketer, for example (he's called Simon Grund), and he wistfully recalls Ogden playing a legendary game, and batting ball after ball into the sea. Needless to say, one of those very cricket balls is to be found in a nearby lobster pot, encrusted with barnacles.

There are other things to do, of course. Virtually everything in every environment is worth investigating for its whimsical secrets, and there are also some splendid sidequests. These present you with abstract 2D images, which are cross sections of objects somewhere in the world. Should you find the right transect for the right object, you will discover grenkins. Grenkins are a kind of pleasant spectral vermin, and each one is unique. They are pure Hogg/Haggett doodling joy, and despite loathing collectibles in most circumstances, I want to find them all. 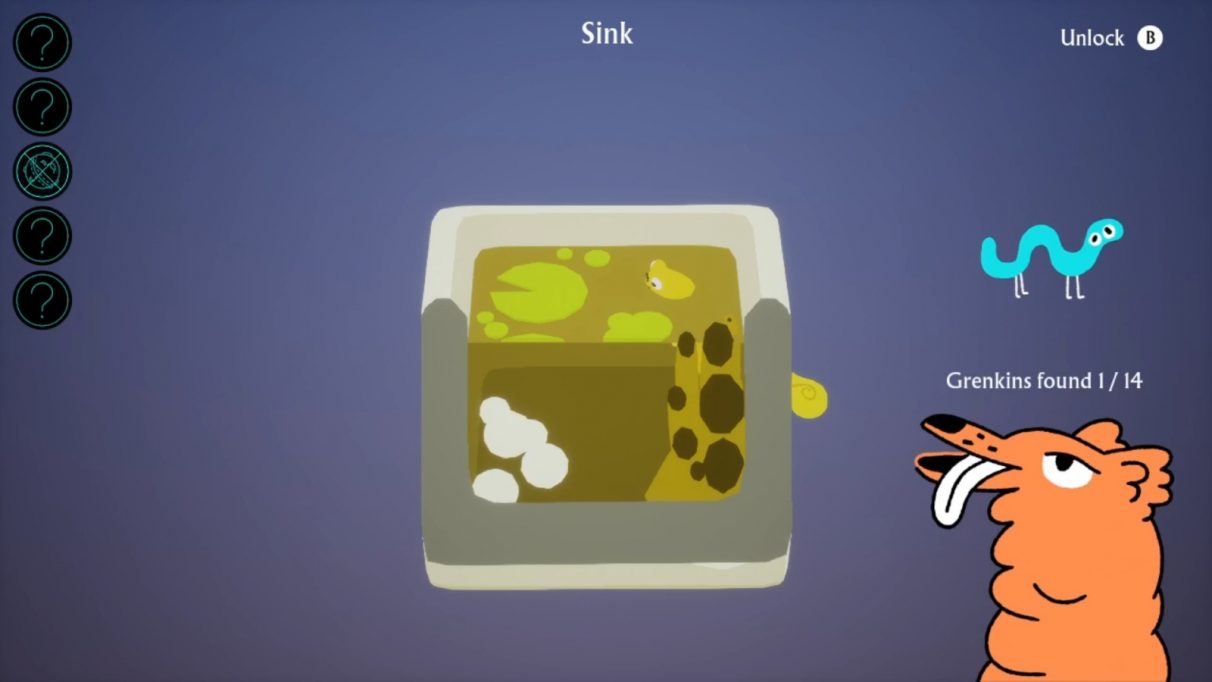 I Am Dead's pleasures aren't just visual. There's a lot more dialogue in it than there was in Wilmot, and it's beautifully written. I was particularly struck by a brief portrait of an army officer who started a yoga retreat to try and be away from people, and who his robot assistant described as seeming "like gravity was pressing down on him harder than other people". That's lovely. There are even facts about things, mostly true, which appear when you look inside them. In the short time I watched the creators play, I learned loads about both grapefruits and lighthouse lanterns, for example.

The music has the same offbeat tranquility as the scenes it scores, and the voice acting is top notch. Morris is played by David Shaughnessy, whose soft, grumbly West Country accent makes him possibly the most pleasant ghost I've encountered who isn't a Roman, but even he wasn't the highlight. That was... a cormorant, voiced by Hogg and Haggett's friend, and designer of both physical and digital games, Mink Ette. We found this bird on the roof of the lighthouse, and it told us a very simple story about being a cormorant in a voice that was so funny I've just gone back to laugh at it again. 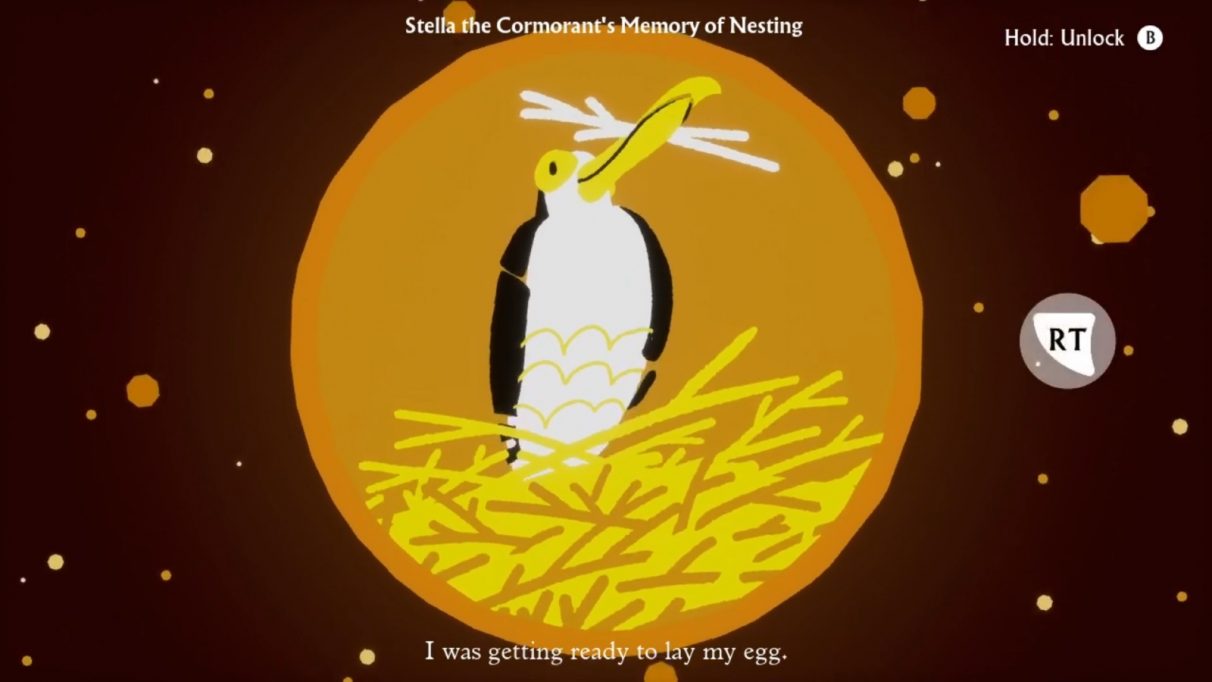 All in all, I Am Dead feels like a much more personal bit of work than Wilmot was. Both Hogg and Haggett have experience of seaside towns of the kind Shelmerston archetypes, and I spot many of their interests tucked into the edges of the game. At one point, we look inside a vacuum cleaner and see a little tin Buddha, and Hogg pipes up. "That's based on a real thing that happened to me. I accidentally hoovered up a little tin Buddha, and I had to cut the hoover open to retrieve it." 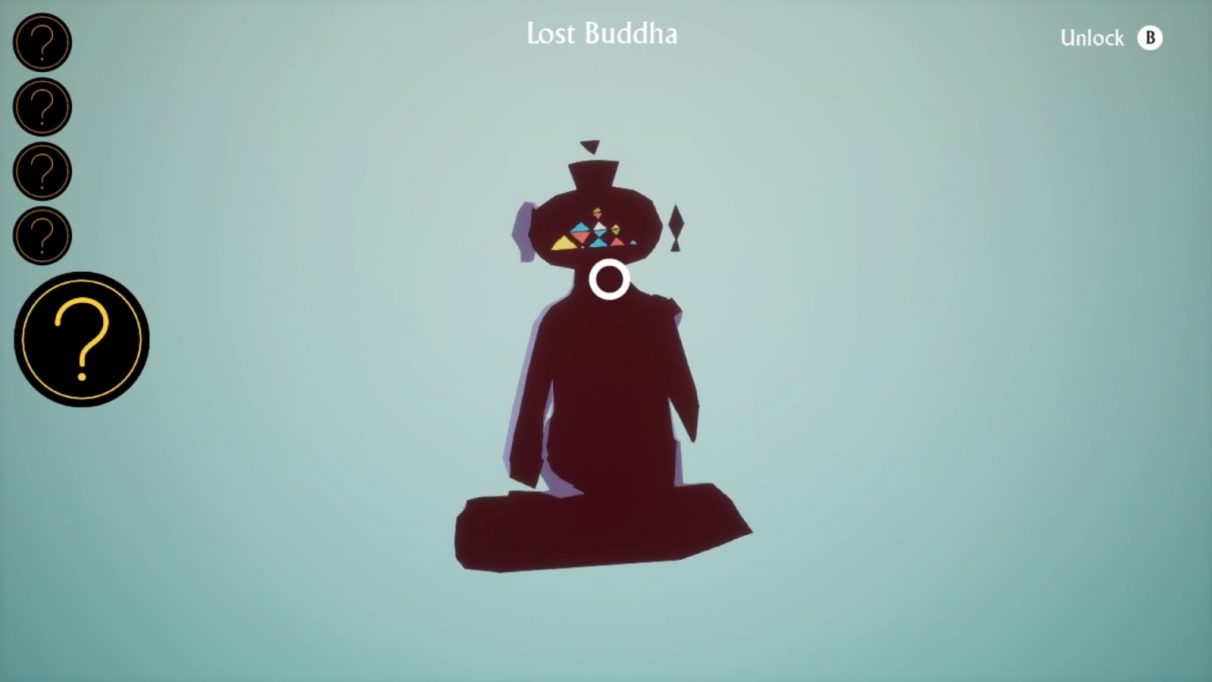 Colourful tetrahedrons then appear in the Buddha's head as we look through it, forming a weird, scintillating pattern, and Haggett reflects on how nice it looks. "There's all this lovely animation that just comes out of slicing 3D geometry," he says, "in a way we couldn't predict until we made it and sliced through it."

It's worth noting that this game is also very funny, in a way that really appeals to my sense of humour in particular. At one point, we found a burly construction worker, imprisoned in a weird concrete bollard thing "for being rowdy", and I laughed out loud. There are also fish people, who when I see them, are queuing up for toast. "They used to live in the sea caves," explains Haggett, "but now they're here on the surface more often. And they're obsessed with dry food. Admittedly, that was mainly an excuse to put loads of toasters in the game, though, 'cos they're great to look inside". We look in the toasters; I can see what he means.

These are not pretentious men. And yet still, I can tell that I Am Dead has some big, but quiet, things to say about death and change and memories. Morris loves Shelmerston, and he wants to stick around there, but according to Haggett, he can see that it's changing in ways he's not at ease with. I've got a horrible feeling that Morris's story will lead him to the realisation that it's time to move on, and I can't help myself. I ask if it's got a happy ending.

"It does," says Haggett, at the same moment as Hogg says "does it?", in the same tone as Thor saying "is he though?". "There's a lot of sad stories along the way," concedes Haggett, after a moment. "It's bittersweet."

I suspect it's going to make me utterly fucking sob. There's nothing morbid or hammy or overly sentimental about I Am Dead, but I could almost smell the sadness, in the way you can smell when it's about to rain. I know that in this case, the rain will be coming out of my face.

I Am Dead is "nearly done", apparently, and out very soon, though the Steam store page won't be pinned down past a broad 2020 release window.