If you click on a link and make a purchase we may receive a small commission. Read our editorial policy.
Command & Conquer Remastered Collection review
It’s as close to a perfect restoration of two genre-defining real-time strategy games as you’ll get - but the soporific effects of nostalgia do eventually begin to wear thin.

Who remembers the 90s? Teachers cowering under their desks, living in constant fear of gunge reprisal. Dave Benson Phillips stomping a Furby to death behind a Woolworths. Princess Diana slowly opening her mouth on live television to reveal the very first Tamagotchi. And then there was you, a horrid greasy goblin person hunched over a yellowing CRT monitor in the corner of the living room. On the screen is Command & Conquer, the hot new videogame from Electronic Arts and Westwood Studios, and the first ever strategy game to feature an electric guitar.

If nostalgia is a drug, a potent chemical sludge your brain produces whenever it recalls literally anything from your past, then Command & Conquer Remastered Collection is a seized shipment of the purest form of the stuff, the kind that entire police departments get together to proudly have their photographs taken in front of. It collates the original Command & Conquer, its sequel Red Alert, as well as all of the various expansions and console-exclusive missions that never made it to PC, and refurbishes everything for our modern, discerning eyeballs. The result is the definitive restoration of two classic and improbably ancient games. It is both precisely as good and exactly as dated as it’s supposed to be. 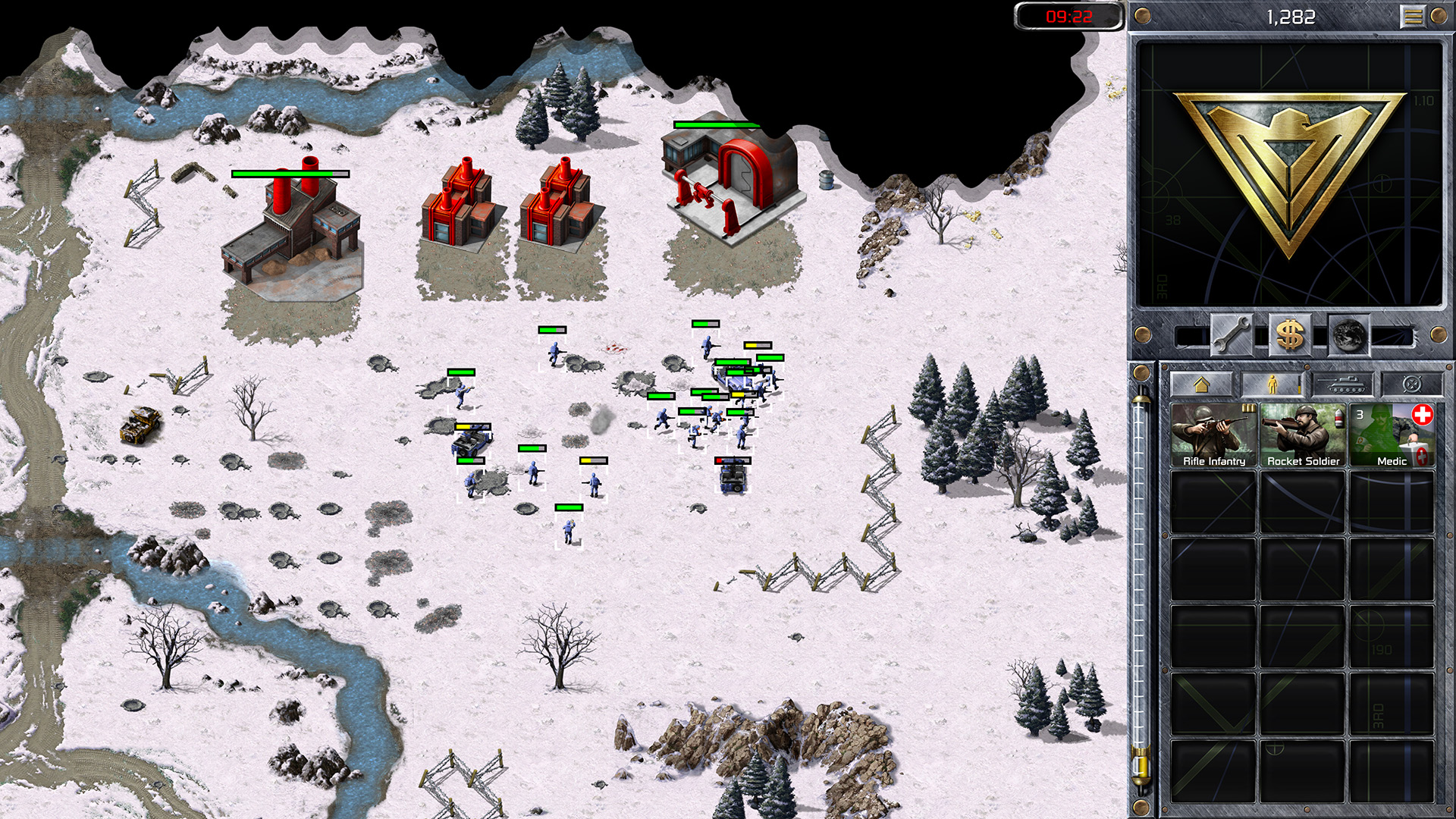 The games open with the familiar EVA boot-up sequence, now reimagined for the modern age. An automated setup screen pretends to search for an obsolete Sound Blaster card, before settling on high-definition audio and ratcheting the resolution up from an impossibly inadequate 320x200 to a luscious, retina-pleasing 4K. It’s a straightforward magic trick, but a deliriously effective introduction, like watching your childhood dog stroll into the room, wagging his tail as though he’d never been flattened by the neighbour’s car.

Every building and unit has been redrawn based on the original designs, upscaling them from countable handfuls of barely legible pixels to finely detailed illustrations that still feel authentically Command & Conquer: which is to say, oddly flat, rigidly tile-based and never quite blending with their surroundings. Neither game is very pretty, but the new power stations, refineries, attack dogs and harvesters appear just as they did back when you had no choice but to view them through the beautifying lens of your own imagination. Hit the spacebar and you can toggle between the new and old graphics at will, flicking back and forth like you’re having an eye test. 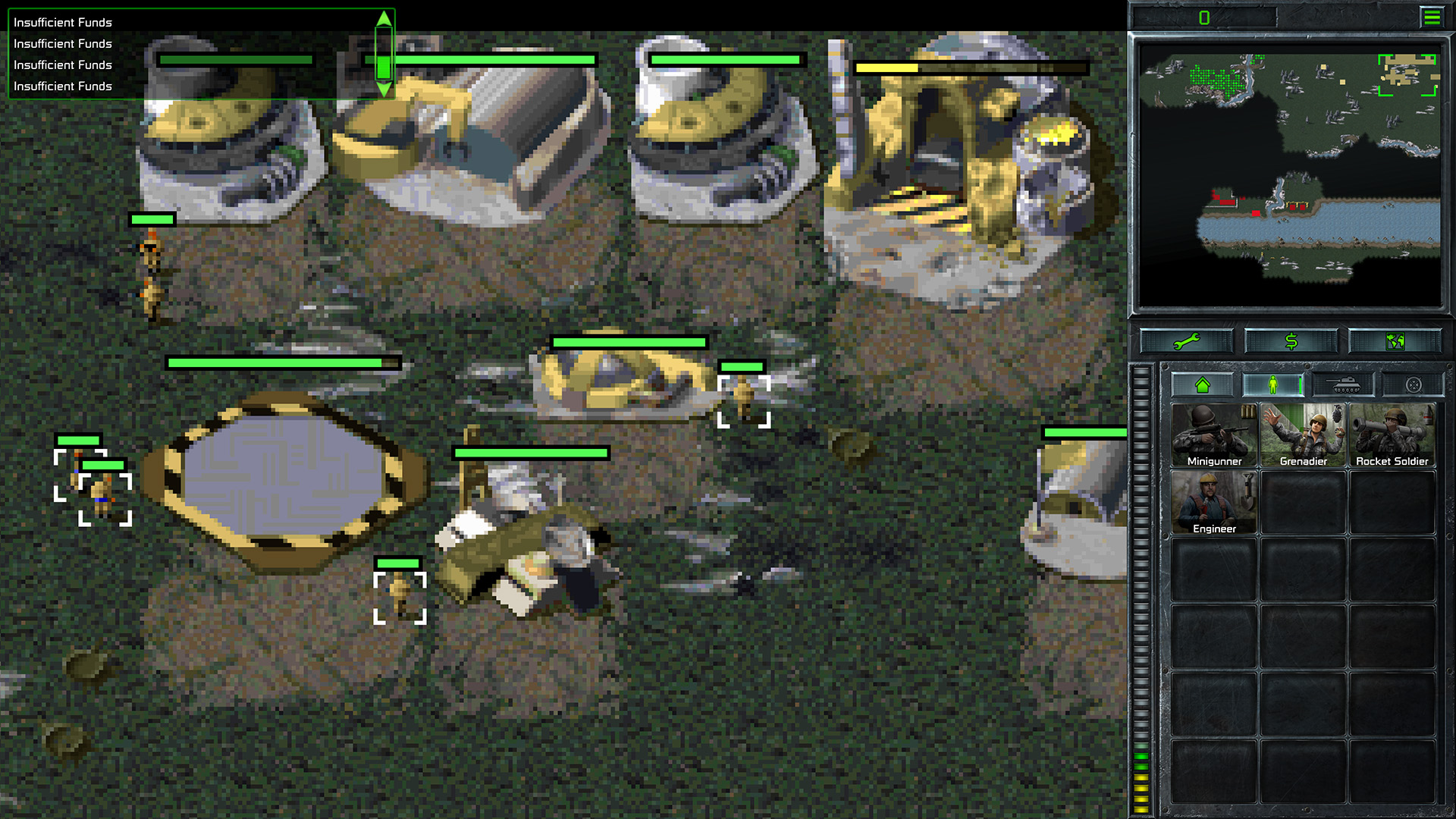 Even the peculiar little idle animations have been carefully restored. Bored rocket men fidget with their weapons whenever they’re standing still, and engineers do teensy three-frame pushups while they await your orders. Every mouse click is met with an achingly familiar “affirmative” or “yes sir”, and because the fog of war hangs so near to wherever your units are standing, and the concept of waypoints had not yet been invented, you’ll be hearing those barks several millions times per minute. Play it with somebody else in the room and they’ll quickly ask you to turn the volume down, another neat little detail the developers have carried over from the original version.

Then there’s the sumptuously remastered and iconic soundtrack, resampled from the original analogue recordings to sound, well, about as good as how you remember hearing them the first time around. It's only by switching back to the original versions, which now sound like they’re being played on a kazoo in a public toilet, that you recognise the upgrade. There are even a few optional bonus tracks thrown in, music recorded at the time but never included in the original games, though players on a pure nostalgia kick can choose to have these newcomers eradicated from the playlist. 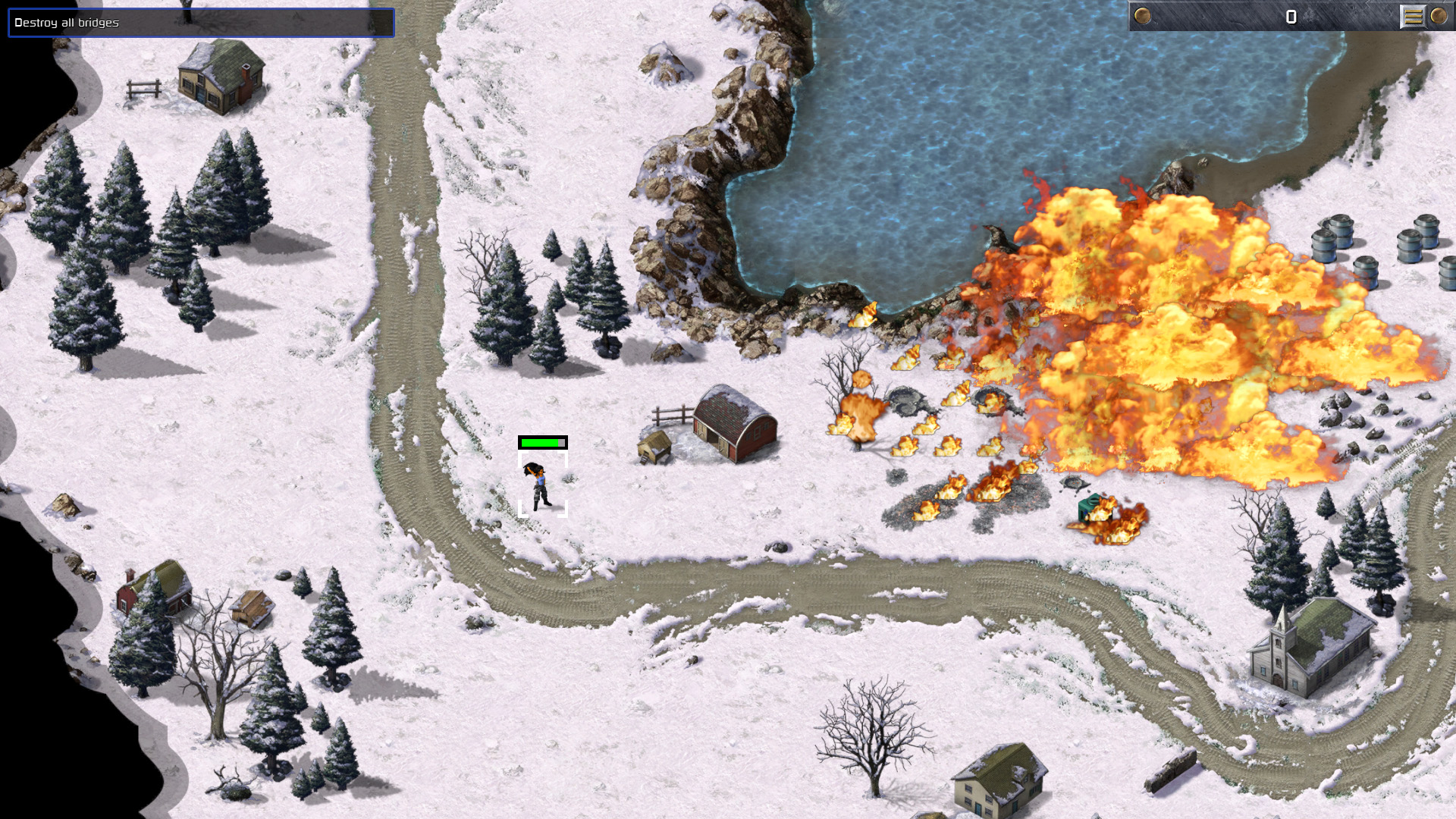 Less well preserved are the series’ infamous FMV cutscenes. The original footage used to create them was lost, and so each of the blocky, low-resolution videos have been run through a brutal upscaling algorithm, which uses cutting edge artificial intelligence to absolutely mangle everything it touches. New detail is guessed at based on too-few pixels, producing a smeary facsimile of high-resolution video.

The effect is woozy, dreamlike and peppered with jagged artifacts, like you’re playing from the perspective of somebody who’s fallen asleep wearing their contact lenses and woken up in the briefing room. Seth looks like he’s spent some time in a microwave. Kane looks shiny, like a rare Pokémon. Still, this clumsy FMV upscaling is readily forgiven, considering what you’re watching is not a painstaking, frame-by-frame remastering of Gone With The Wind, but a game where Einstein hops in a time machine to go murder Hitler. 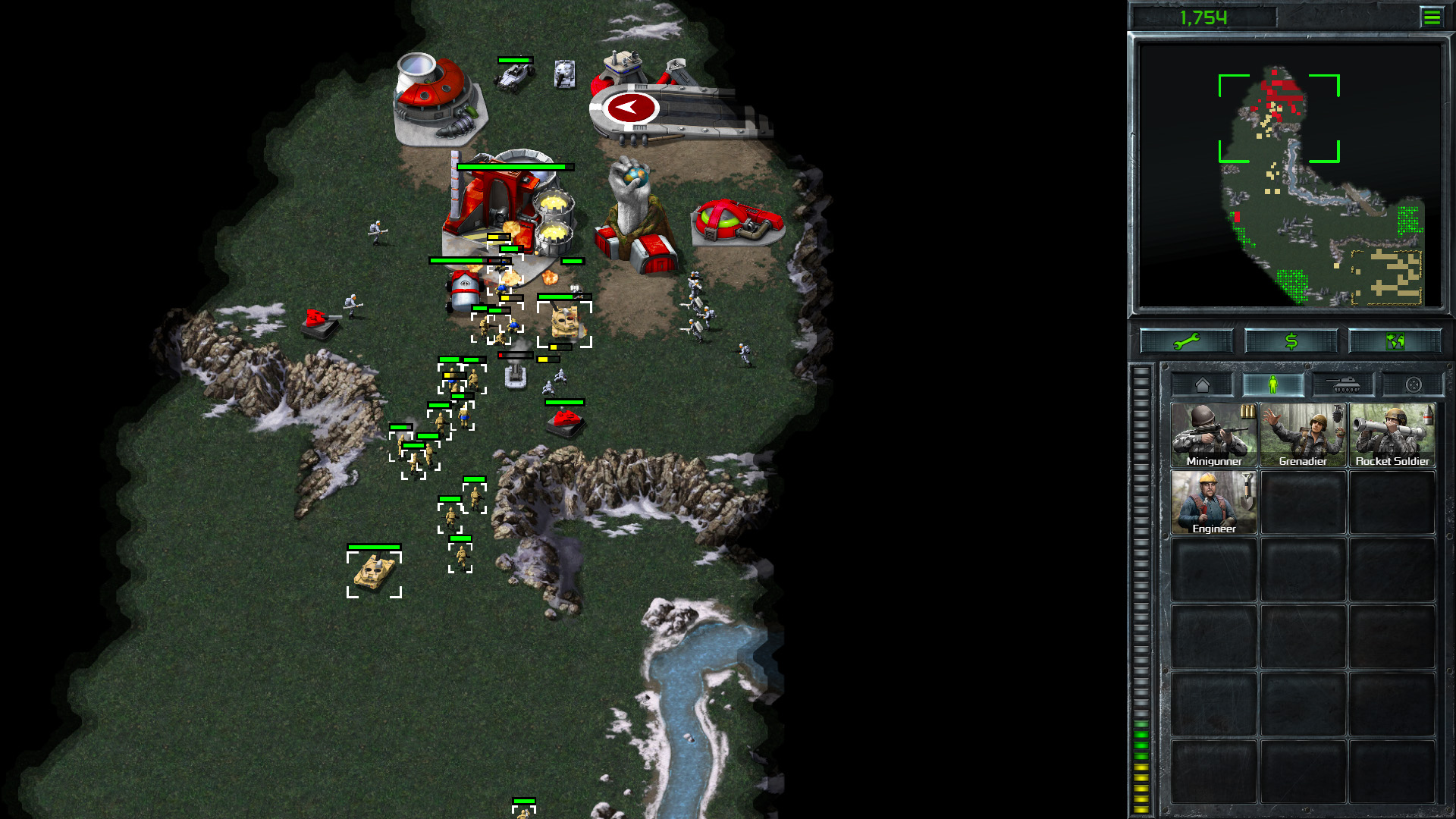 Peering this far backwards through time without sufficiently rose-tinted spectacles is risky business, and the soporific effects of nostalgia do eventually begin to wear thin. But while EA and Petroglyph have been meticulous in leaving almost everything where you remember it being, they’ve also papered over cracks to make your return to the commander’s seat a smoother and less jarring experience. There’s some flexibility in how they’ve approached the refurbishment, not just with a slavish dedication to warts-and-all authenticity, but with a keen eye for common sense improvements where they could reasonably be made.

Most of the cracks made the grade. The pathfinding is as horrendously creaky as it always has been, the mere sight of a cliff face or river compelling your tanks to whizz off in unpredictable directions. Infantry units still flock like birds, and are so lacking in a sense of self-preservation that it’s a small wonder they’re not constantly throwing themselves against the sharpened edges of the interface. Soldiers wander through hails of gunfire to reach the exact pixel of grass you asked them to move to, rather than pausing to return fire. As frustrating as these examples are, had these blemishes been airbrushed out it would have tinkered with the game’s genetics, mutating it into something else. Something better, but something different. 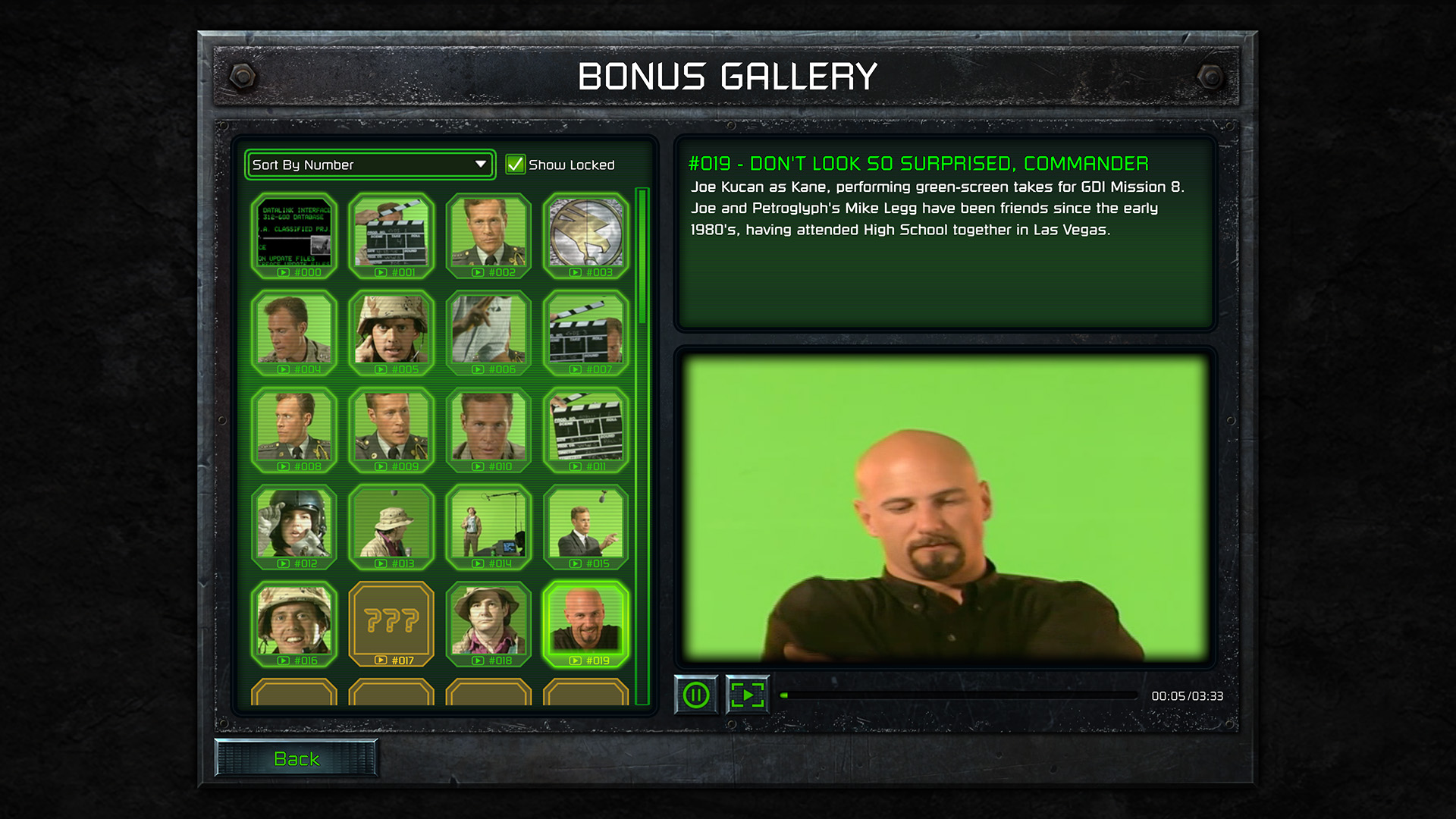 But then certain essential improvements have successfully been introduced. Mod support, dedicated servers and match replays are the biggest new features. In missions themselves a set of modern conveniences from later games, such as build queues, difficulty settings and a smoother scrolling camera, have been sneaked in through the back door too. Red Alert’s vastly more useful sidebar has been transplanted back into the first game, and then refined even further.

Rather than feeling inauthentic, these small updates seem entirely at home, and so obviously correct that you’ll start to question your own memory. Surely build queues were always in Command & Conquer? Was there really a version of this game in which you had to click on the grenadier’s face once every seven seconds to train more than one? Would Westwood really have made us all waste our time like that, just clicking away like idiots?

They would, and they did. We’re unreliable narrators, incapable of properly recalling the colour of a dog we saw yesterday, much less the finer details of a strategy game we played more than two decades ago. Command & Conquer Remastered Collection is a faithful representation of something that until now has existed only inside our withering minds, a pair of genre-defining strategy games trapped inside our neural pathways like fossilised brain-mosquitos, brought back to life by science.

It’s as close to a perfect restoration as you’ll get, and the treatment these genre-defining games deserve.