The demo for Cyberpunk 2077 shown to press at E3 was pretty neat. It displayed CD Projekt Red's upcoming first-person neo-noir RPG as a promising city of cybernetically enhanced mercenaries, dodgy information brokers, and corporate maniacs. Without a doubt, that demo will be shown to the rest of the public soon. For now, you can read my impressions or come with me right now, for a chat with one of the developers.

Maciej Pietras is the game's lead cinematic animator. He was fairly tight-lipped about certain things, but did speak to me about Night City's cars, the game's romantic entanglements, and the hacking abilities of main character, V.

RPS: How do you bring variety to such a big environment as an animator? You’ve got a lot to do in terms of the people.

Maciej Pietras: When it comes to the animations and the systems, we’re trying to create a seamless experience, where you don’t actually see the big difference between the gameplay and cinematics. We’re trying to make the transitions as seamless as possible… This is actually the biggest part of our challenge. We’re trying to really express the world, the interactivity, the NPCs, as fluidly as possible...

RPS: So that’s how the dialogue will work in the final thing? You just walk up and talk to someone, no freezing, no zooming in, or whatever. But what happens if there’s an interruption for example?

Pietras: When it comes to interruptions… we revised the Witcher 3 system and we’re trying to find a way where it's seamless as possible. We’re working on creating this weird feeling… where if a person is still talking to you, she can be interrupted, that’s what we’re trying to do.

RPS: So you can allow for it, and then they’ll just return to the point they were making?

RPS: The driving can be in first-person or third-person. But for the car’s handling, are you going to do the thing from Witcher 3 where you can hold down a button and it will auto-steer. Like when Roach, your horse, just followed the road?

Pietras: When it comes to driving and systems, I think all I can say right now is that this is something we’re really working hard to make it as seamless as possible to be able to drive through the city, and I think in the demo you also saw the combat situation from the car, yeah? So this also part of one of the systems we have. You will be able to get out of the car, start shooting from the top of it, and it’s all systemic… The cars have to feel heavy… and we’re trying to recreate that realistic feeling of driving a car…. When it comes to [automatic road following] it’s too early to tell.

RPS: We didn’t die in that demo but –

Pietras: You will be able to die in the game!

RPS: But will it be a normal “game over” style death or is it going to be something a little more creative in terms of Cyberpunk? Something like Altered Carbon, where you haven’t really died?

Pietras: You will be ‘dieable’ in the game.

RPS: So just a game over screen. 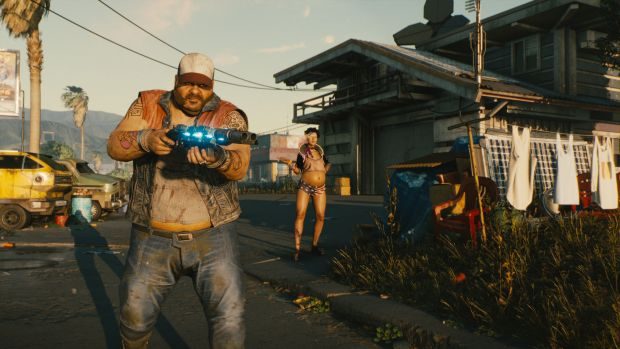 Pietras: This is cyberpunk. Cyberpunk is a super... narrative-driven game. And since the world, as you said already, is ruled by the megacorps, and on the bottom of the ladder you have the lowlifes - you know, the psychogangs - and in the middle there’s a struggle of trying to stay afloat. I truly believe that the story will be touching those themes. Because, to put it simply, if you’re living in a dystopian world, you’re fighting to stay yourself. In this game you’re playing as V, the mercenary, who just started to work in the city, to push through the city to find your own path, and this is a thing that we’ll be able to show you all the problems of society in this game. But also all the ways that the psychogangs fight against each other and how the mega corporations are ruling the world... but when it comes to details of the story I can only [say so much].

RPS: You’re always playing as V, the main character, whether you’re male or female, but you can change how you appear, how you look.

Pietras: Yes, in the character creation process you’re able to create all your appearances, the skin colour, hairstyles, faces, body types, but also you define there your classical RPG stats. Your attributes, abilities and perks.

RPS: One of these [characteristics] is “Cool” - what does that mean?

Pietras: [laughs] I will have to refer you to the Cyberpunk 2020 rule book, how it defines cool. 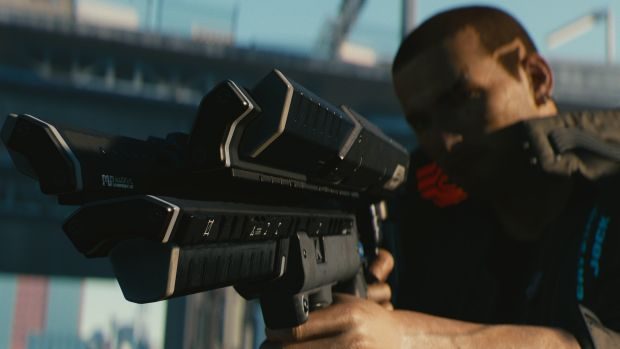 RPS: You can also have different backstories. Can you give us some examples of those?

Pietras: The main thing about backstories is that, since we’re creating a game in which you’re making your own character... you want, as a player, to be able to create anything, to play as anyone. And choosing your backstory is one of those first choices you make in the game, and … there are going to be consequences of those choices throughout the story. But when it comes to details of those backstories I’m sorry I can’t [tell you].

RPS: No debt collector origins? Maybe your family was killed in a terrorist bombing? Anything!?

Pietras: [laughs] What! What was that last one?

RPS: Your family was killed in a terrorist bombing. What? That’s the kind of thing that would happen in a game.

RPS: Jackie is the big character who accompanies V. Is that a constant character who’ll be with you throughout, or will characters drop in and out, like in The Witcher? Will you have companions that come and go?

Pietras: Yeah, like even in the demo, he wasn’t with you the whole time. The person you had sex with in the demo, who you woke up with, that wasn’t Jackie, right. So he’s not always with you. He’s one of the main NPCs. Jackie is... super interesting [and] is involved deeply in the story. This is actually the approach we do when it comes to the NPCs that you have relationships with. They are not just NPCs, they are vessels that answer your questions about your choices and how you want to progress through the story, and your relationships with them are important.

RPS: Tell me about romancing!

RPS: Do you mean that characters in the world, some of them will reject you outright based on your gender? Because they’re not straight or gay or whatever?

RPS: So those things are set in stone. It’s not like a BioWare game where you can just go with whoever you want? You can’t romance anyone, because they will put a limit on your romance.

Pietras: Yeah of course, because we treat every NPC as a character. So there will be characters who are homosexual, bisexual or heterosexual but they will be obviously responding to your gender and your choices. Because you’re choosing to romance that person, and if you happen to be, I don’t know, a guy, and he happens to be a guy, then yeah [shrugs]. 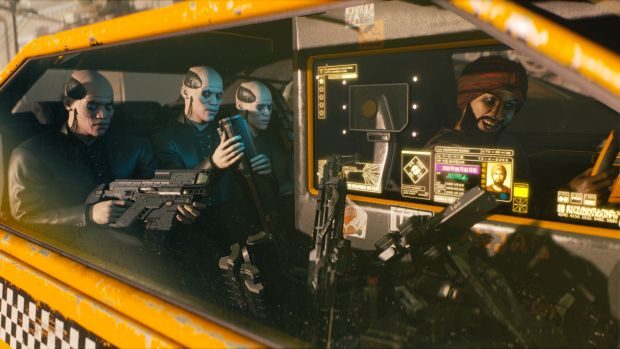 RPS: Just out of interest why have you gone with this Destiny style of numbers popping out of the bodies when you shoot enemies? Why not just have a health bar?

Pietras: That’s a very good question. I think to be honest it’s more about the style of the game, you know, we are making a first person role-playing game. As an RPG you have to be able to show the player how much damage his weapons actually do, right? So since you will be able to change your combat style, since there’s a fluid class system, you’ll be able to adjust things on the fly. And this is just one of the visual references we have to show you this weapon does this [amount of] damage to that enemy, and based on this armour, or your weapon and mods, this is how much damage you do.

RPS: Will you be able to fly the flying cars? I need a straight answer.

Pietras: Current means of transportation that I can tell you about, that we are sure of, and that we know we can share with you: obviously you can walk on foot, you can drive a car, and you can drive a motorcycle. When it comes to AVs [aerial vehicles], yes, there will be moments when you will be able to fly AVs but you’re not going to be able to control it because if you refer to the source material, AVs are like the most expensive things in the Cyberpunk 2020 world.

RPS: So it’ll be limited.

Pietras: Yeah. And heavily connected to the story, because this is still the societal struggle, right? Because you’re starting the game as V, who has nothing, and is trying to make a mark in the world, starting from the bottom up. 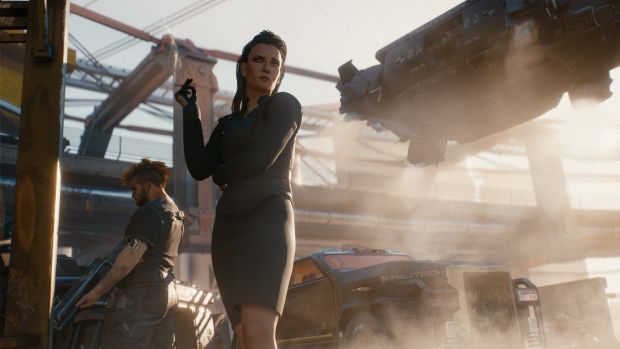 RPS: We saw an example of V hacking a person, to stop their gun from working, for instance. Are there any other examples of stuff like that which you can talk about?

Pietras:  Yeah, of course. We call it Netrunning, which is again from the source material, and I think it’s a perfect description because … in the demo you had to hack a terminal first, and through that terminal you gave yourself “Quick Hack” to [apply] during combat on those enemies that you hack. And all while you’re hanging from your mantis blades on the wall, before jumping down and smashing the guy [laughs], so we were actually disabling the guy's weapons, as you say. But other forms of hacking that I can tell you about for instance, let’s say there’s a turret, you will be able to hack it if that turret is connected to the network. If you hack the network, then you can hack the turret. Netrunning is for, like I say, turrets, weapons… doors, especially connections to different places. Like [there’s] a way to hack security systems, that will then be disabled when you enter the room.

[At this point in the interview, the PR comes in and tells us “last question”.]

RPS: Maybe both. There were some murmurs of multiplayer. Can you tell me what’s happening there?

Pietras: Currently we are really focusing on developing the fully open-world role-playing game. And what you’re going to get straight from the box will be a fully fledged single-player experience. When it comes to the multiplayer, I’ll be honest, we’re doing some R&D, we’re researching but that’s all I have to say.

Pietras:  That was your last question!

RPS: You’re like a tricky genie. Thanks for your time.