Based on what we know about biggo sci-fi RPG Cyberpunk 2077 so far, you could likely spend a couple hours just sitting around in character creation or wandering the city streets. While you're out there getting lost like a tourist in the giant, neon city, might as well stop for a photo or two as proper tourists do, right? CD PRojekt Red have published a new video today showing off the many features of the game's photo mode including some quite familiar poses, another way to likely lose a few hours in Night City.

It's become a law of the land these days that big open world games come with a photo mode for stopping the action and taking artistic shots of their huge environments. As they do, Cyberpunk's version has a slew of features for changing a shot's exposure or contrast or depth of field. There are stickers and effects and frames, oh my!

What I want to talk about though are the poses. Yup, sure enough, you can change the pose for your character while taking a photo and it's not just cutesy peace signs and heart hands, oh no. They're edgy poses for edgy mercenaries with devil may care cyberpunk names to boot. I know I've already given it away but take a look and see if you spot anything else familiar.

The video begins by showing off filters and all for a pose called "roundhouse shot to the face" but just about halfway through—hold on just a second. There's one called "V for Victory". Get it? Because your character's name is V. I know that pose though. That there's a praise the sun. That's my pal Solaire's pose, V, not yours.

But oh no that's not all. They cycle through quite a few options later in the video so quickly that you might miss them but I'm now on the lookout for other poses V's lifted. I was going to list every one I saw when going through frame by frame but it became too annoyingly long. Just in the "idle" category there were at least 30 poses. I'm not an avid photo mode user but that feels like a lot. Here are some of the ridiculous and/or familiar ones: 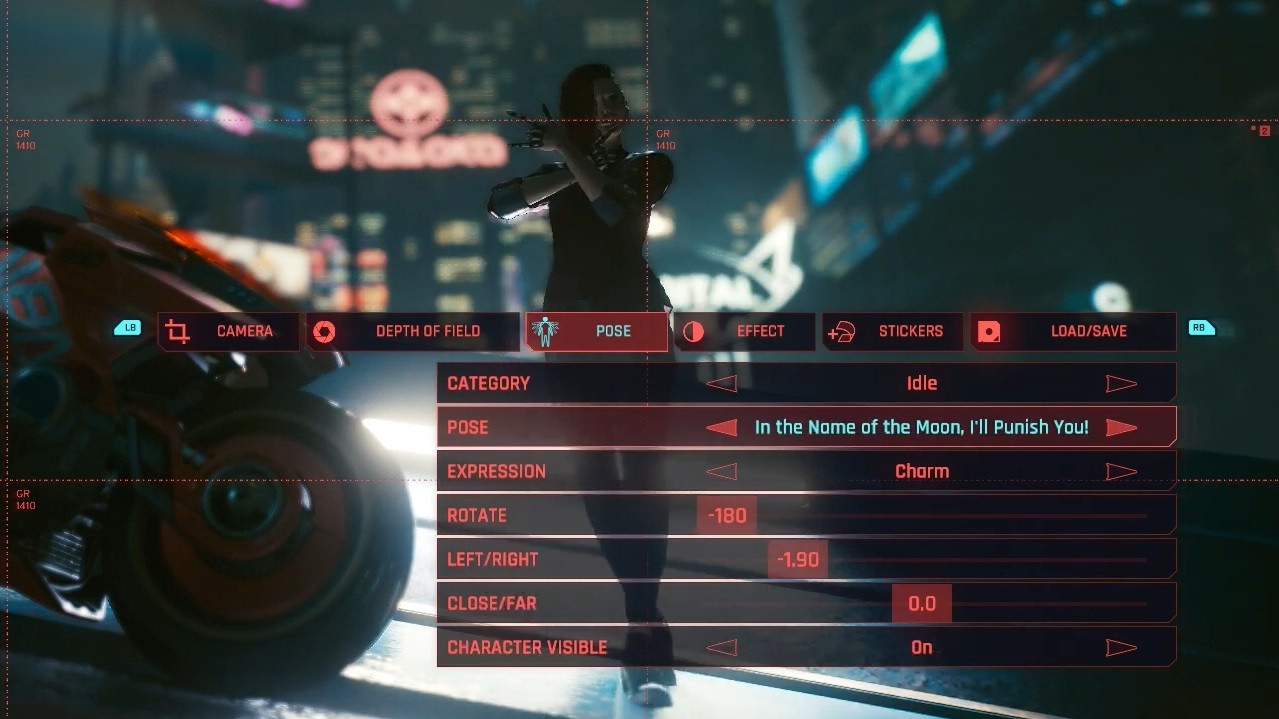 I appreciate that amidst the references to other famous characters V gets the chance to show off her own personality and whatever she comes up with just gets labeled "V's bizarre pose" as if she's an absolute dork who flounders when given the chance to be sincere.

Anyhow there you have it, a look at Cyberpunk 2077's photo mode. I've spent too long already just now scrubbing through video frames looking at pose names which doesn't bode well for the amount of time I'll spend actually using the photo mode itself or puttering around in character creation if I wind up playing it.

After multiple delays and the resulting development crunch, Cyberpunk 2077 is finally (probably) launching next Thursday, December 10th on Steam, GOG, and the Epic Games Store.