Darkest Dungeon developer Red Hook Studios introduced “Radiant” difficulty to their infamously tough sidescrolling slog ‘em up early last year, making it quicker and cheaper for the game’s gang of highwaymen, lepers, grave robbers, and other playable miscreants to gain new skills. The new mode reduces gold costs for upgrades, provides more cash for dungeon visits, and bumps experience gains, with the effect of dragging the time of a playthrough down from the 80 hours quoted by its developers to a more manageable 40 hours. But in a game renowned for its punishing difficulty and mind-shattering horrors, how does an easy mode even work?

Well, with this being Darkest Dungeon, Radiant difficulty is still not what a sensible person would call easy.

“Easy” is not having your first party chewed apart by Cthulhu-humping fishmen before they even got to level up their abilities. “Easy” isn’t giving your best dungeon-crawler a crippling fear of confined spaces and gleefully convincing him that he’s a lion when he’s meant to be fighting a squad of vomiting pig people. “Easy” isn’t springing a cage-headed skeleton daddy who can summon a veritable bones brigade to battle your band of least-experienced adventurers during their first foray under the earth. 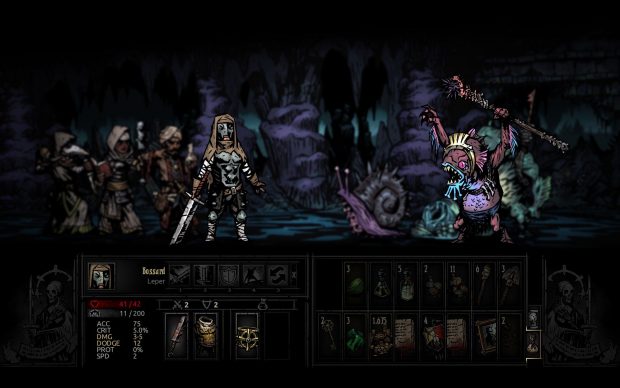 It’s also not easy fighting an enemy when your enemy is entropy itself. Darkest Dungeon’s playable characters — from the jester to the crusader via the abomination — get tougher and unlock new skills as they delve into the depths, but they’re also very like to develop negative quirks the more time they spend down in the dark or out in the wilds. At first, these quirks are minor inconveniences, but once an adventurer has faced death and horror a few times, the quirks start to pile up, turning your stalwart champion into a stupid liability.

Vestals, for example, should be super-useful pseudo-nuns, ideal for propping your party up with healing spells, while keeping themselves alive through lifesteal attacks. My highest-level vestal, however, is absolutely obsessed with fountains. She can’t walk past one without sticking her hands in — ostensibly to wash them — even if it means she ends up contracting some eldritch malady. That’s how she ended up with two other quirks: “sickly,” and “anemic,” giving her an increased chance of catching diseases or suffering bleed damage during battle.

If I wanted to cure best vestal (bestal) of her fountainophilia then I’d need to commit about 5,000 gold to her treatment, and take her out of my rotation for a full week of game time. That’s about as much gold as I can hope to earn in an early game dungeon run, and the treatment (likely) wouldn’t do anything about her sickly nature and anemia, which would cost me another 10 grand to fix. In the meantime, I’d have to use backup characters, each of whom are just as likely to come out of the gloom with their own weird predilections — fascinations with corpses and alcohol addictions racking up faster than I can knock them down.

Leave these too long and they’ll get worse, degrading your character’s chances of staying alive just as they’re finally becoming tough enough to withstand some of the harder dungeons on offer. Quirks that negatively affect a champion’s stress level can be particularly painful. Characters have a good chance of earning an “affliction” when their stress tips over 100 during a dungeon run, making them act weirdly and increasing their partymates’ stress level in turn. Of these afflictions, I learned to dread “irrational” the most, a condition that meant my champions would regularly refuse healing even when they were knocking on death’s door. 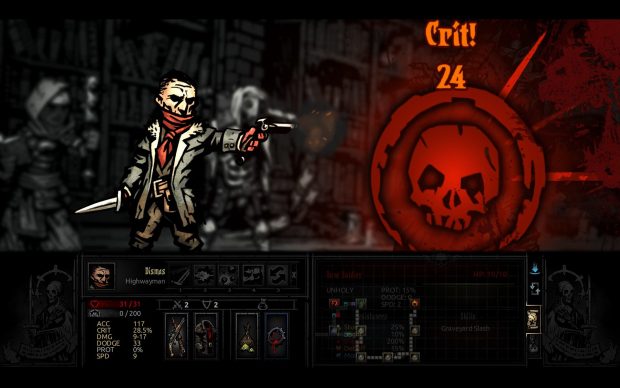 Stress can — and should — be managed by successful teams, either through abilities that directly remove its buildup from party members, or by bringing hardened warriors that need more than the sight of a spooky skellington to turn their stomachs. Stress removal is particularly important when you’re partying with the abomination: a class developer Red Hook released as a free update ahead of the game's official launch. The abomination can fight as a scarred human or turn into a werewolf-ish beast, giving him access to a wider suite of attacks than most of his peers, but battling alongside him as he goes all American Werewolf in London-ey is guaranteed to freak out your other party members, ensuring that at least some of them will end up afflicted on longer journeys.

Nothing freaked me out more, however, than taking an Antiquarian on my travels below. Introduced in early 2016, the Antiquarian is no fighter — at least, not a very good one. Instead, she acts primarily as a loot multiplier, increasing the amount of gold that can be carried and snuffling out antiques from dungeons that can then be sold for reasonable profit. She can be specced for some battle utility, tossing toxin-filled capsules to poison enemies, but she’s unlikely to be part of the team on any tougher missions. More useful is the shieldbreaker, introduced late last year in Darkest Dungeon’s second paid DLC pack, who can crack through armour easily but only has a small health pool, necessitating babysitting in order for her to see real success.

The inclusion of these esoteric classes can lead to fun tactical choices, with the Abomination in particular pairing well with fellow weirdboy, the Jester. The Jester can flip through your four-person lineup, buffing teammates and building up power to his “finale” attack before leaping to the front and delivering a powerful killing blow. The move used to be particularly powerful — until a patch last year defanged it somewhat — but to use it effectively now requires finesse and a certain amount of luck. Instead, with death and the potential loss of powerful characters just a few unlucky behind-the-scenes rolls away, I usually found myself just picking safer party compositions. I ignored high risk classes like the Abomination and Jester in favour of healers, tanks, and solid damage dealers who stayed in place, played reliable roles, and came back to the surface without quite as much psychic trauma. 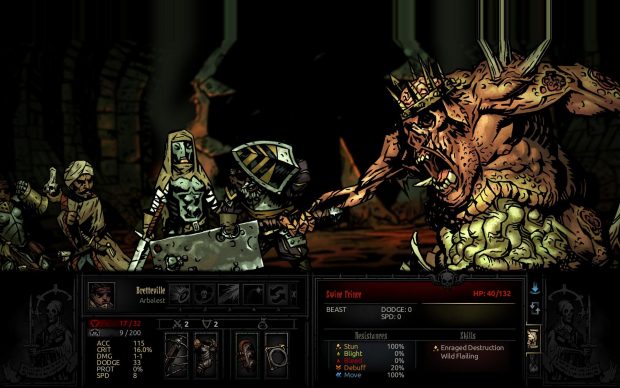 Not that I could avoid stress altogether, even on Radiant difficulty. Runaway stress levels killed my first two parties outright on my first run, and my third only made it out because I ran away from a fight, ditched the dungeon before it was done, and instantly sent all three survivors to the tavern to drink/gamble/sex their way through their trauma.

It’s after runs like these that Darkest Dungeon feels the least rewarding. The new mode offers more in the way of rewards but a failed mission still doesn’t just take me back to square one; it takes me way back past square one to square minus 10, grinding my nose into every single square along the way. With stressed heroes, no cash, and no items to make the next dungeon dive palatable, I got myself stuck performing either super-simple or suicide runs to scrape together the cash and experience needed to one day build a decent team. The Crimson Court — Darkest Dungeon’s first paid DLC expansion — can ramp up this despair by reducing safe areas, flinging you into an untenable situation early and not giving you the time or space to battle back before the darkness closes in.

Dig through these dark times, though, and the treasure at the heart of Darkest Dungeon starts to crystallise. Radiant mode doesn’t feel easier than the original difficulty setting, but get on a good streak and the process does start to feel quicker. After five hours of preparation work, and with a rejuvenated bestal and a beefed up offensive team around her, I was able to take down the game’s first three bosses in quick succession. Granted, I’d left a trail of dead champions in my wake, but the process started to feel more manageable — and less miserable — than Darkest Dungeon regularly felt at launch. With another DLC pack on the horizon and a mode that makes an effort to respect the player's time, a trip into Darkest Dungeon's depths doesn't feel like a wasted journey.