If you click on a link and make a purchase we may receive a small commission. Read our editorial policy.
Developer: Gunfire Games
Publisher: THQ Nordic

"Practice and penance!" snarls Susan Dark Souls, slamming a gnarled first into the table. Kevin Diablo rolls his bleary eyes and leans back in his chair. "Nah, man, just like, have a good time all the time." Susan and Kevin are both dear friends of mine, but boy, oh boy do they not get on.

Darksiders III often plays like a valiant attempt to create a truce between the two of them. Sometimes it works, sometimes it doesn't, and sometimes Ian Loredump shows up uninvited and ruins everything.

One moment demonic fantasy, third-person hack'n'slash action game Darksiders III is a From-style, purgatorial survival-ramble of precision dodging (but in far less canny levels), the next it's wanton, joyfully overpowered carnage. I find it hard to equate the merry old time I had pummelling rotting angels in wide-open wastelands with getting repeatedly ganked by swarms of bugs down in the claustrophobic subway section.

Same goes for the gorgeously gloomy and artistically ambitious environments which house bosses, versus the almost noughties MMO-ish cyclic blandness of the general combat areas. 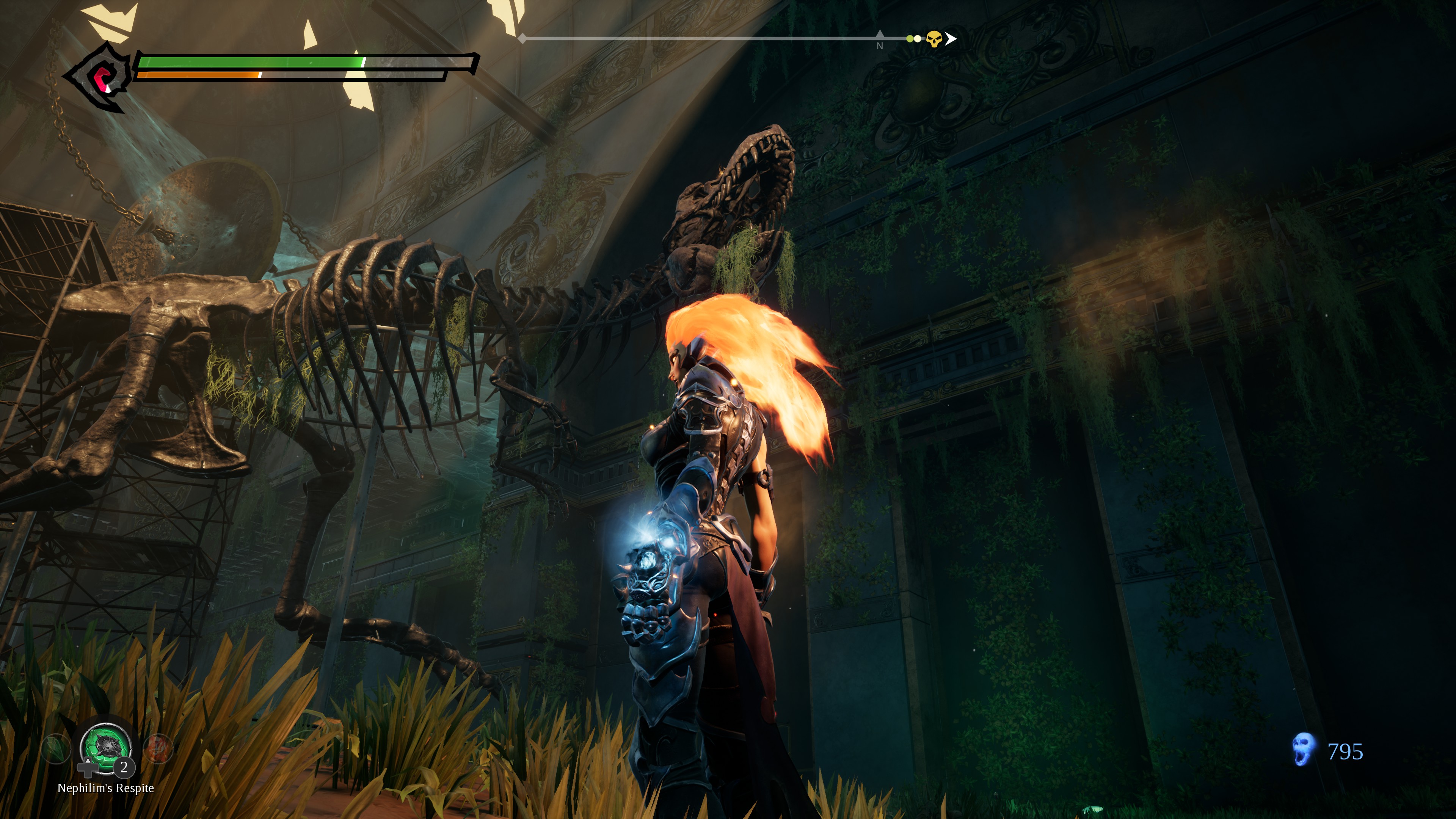 Same goes for the wonderful hand-feel of a well-landed combo that sprays fire, lightning and chains everywhere in a shower of joyous ultra-violence, versus the stilted annoyance of an ever-so-slightly mis-timed dodge that results in three near-lethal thumps from whichever big lad you were trying to run past on your long trek back to your sixth grim attempt at a thoughtlessly-checkpointed boss.

If it were Soulsian through and through I could accept that happily, but it's the switching, the janky flow, that prevents this. That, and the fact it feels so good when it is a joyous song of combos and carnage. 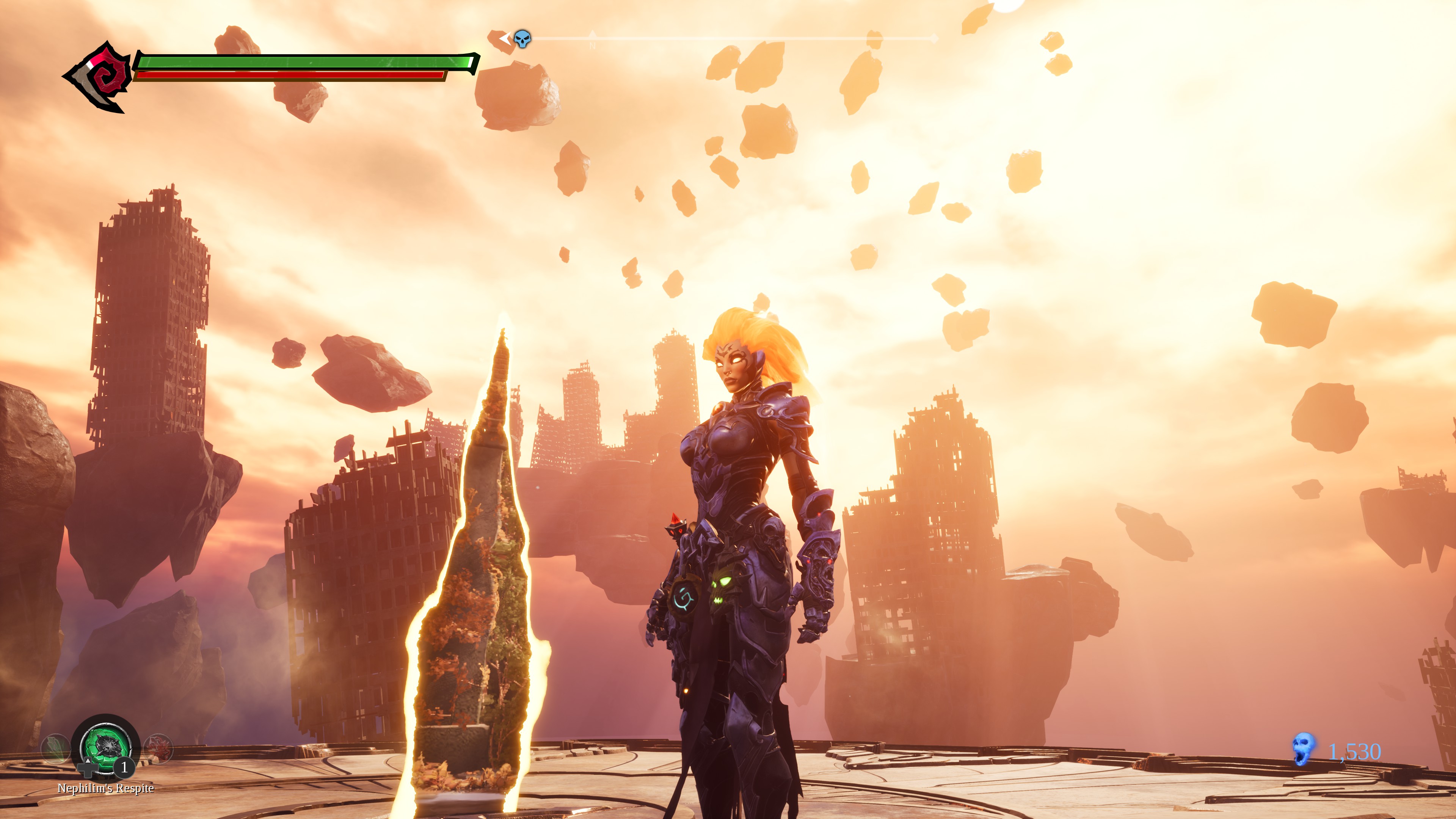 I've moved, more times than I can count, from feeling the itch to play more DS3 to wanting to angrily uninstall it and never think of it again. I'm mostly on the side of the former, and blame the latter on a sporadic lack of refinement rather than the game's fundamental nature.

It can feel so good one minute, so aggravating the next. It can look so beautiful in one scene, and so insipid in the next. The visual design of the seven deadly sin-themed bosses can be startling, but then they open their mouths and drone out Ian Loredump's all-time most-tedious anecdotes. 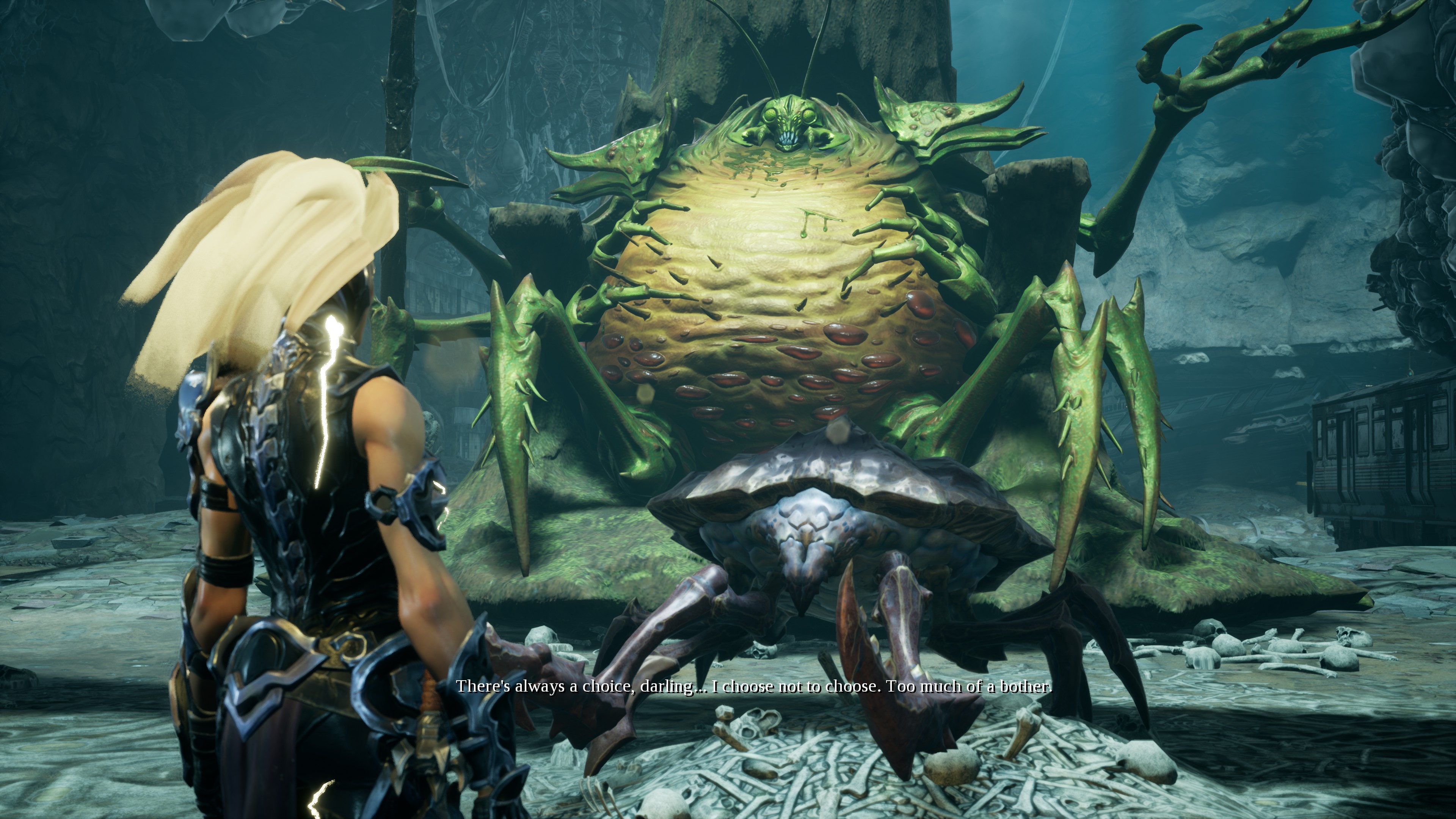 Ian's soporific monotone is most present in the overlong and panto-performed introduction. I've been away for three months on paternity leave, and sitting through that cutscene had me praying for a return to malodorous nappies and endless screaming. It eases off a little after that, but throughout, every character is stuck in one of two instantly-tiresome modes: thin snark or vengeful anger. There's nothing and no-one to anchor to in that regard.

The plot, for what it's worth, concerns Fury, a horsewoman of the apocalypse, battling against what is apparently the wrong kind of apocalypse. In practice, what that means is "spiky demon lady kills a lot of skeletons and giant bugs with a whip made of razorblades". Sometimes that's all it wants to be; other times it seeks to lecture at length about nothing whatsoever of consequence. 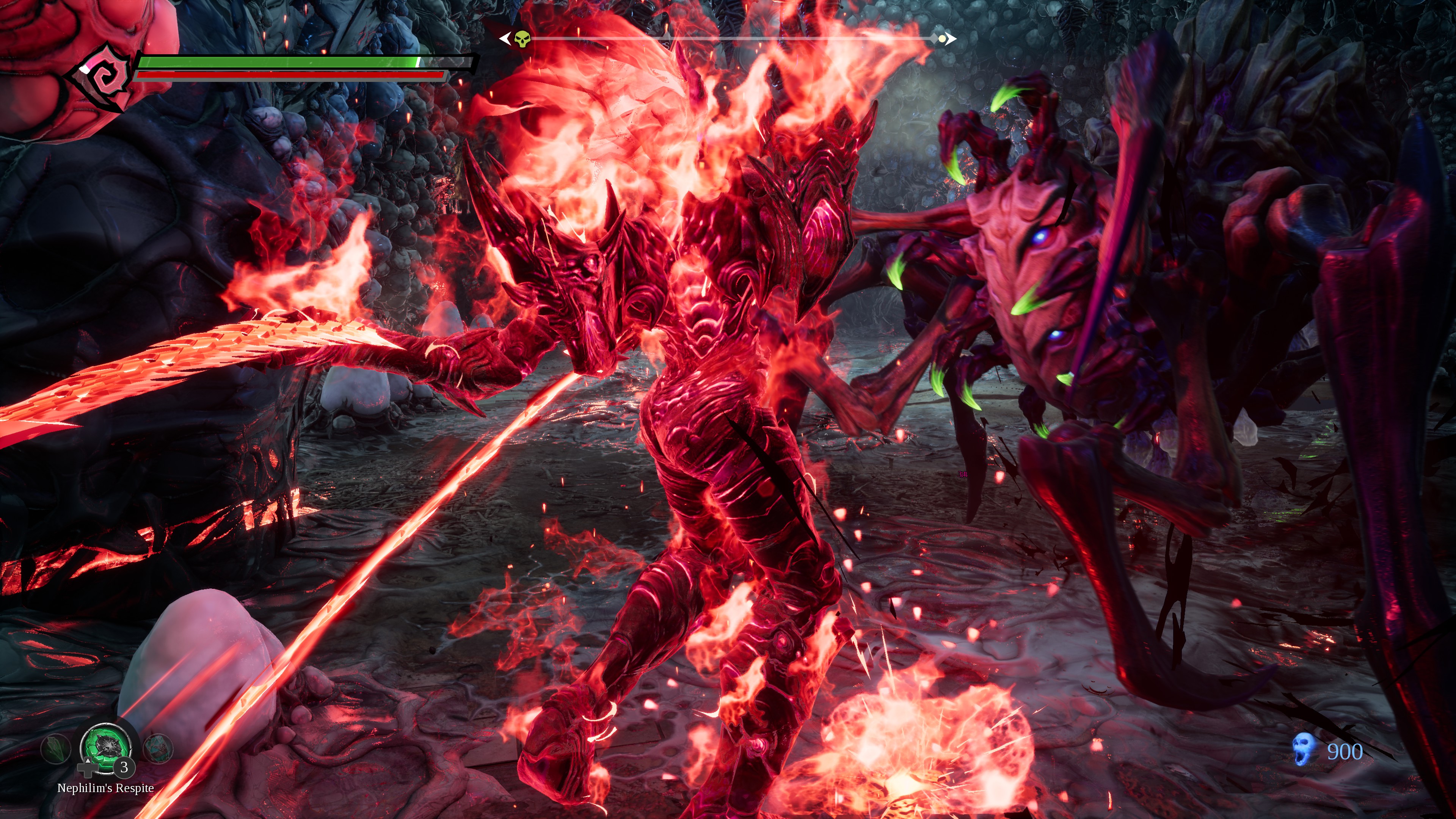 But there's so much to like here, loreballs aside, which is why I'm frustrated by Darksiders III's jerky flow. The characters might have the vocal presence of a Paw Patrol baddie, but their visual design is frequently remarkable. The glummer stretches of combat are offset by a Metroidvania element that has you returning later to find an old area feeling four times the size due to new abilities that take you to previously inaccessible areas. The controls which switch you instantly between different groups of magical powers (for both combat and exploration) are slick and seamless - by contrast, the sluggish, often lethal delays of activating a health potion feel grafted on from a different game entirely.

I can have and have had very happy times indeed with Darksiders III. I've also screamed obscenities at my monitor more times than I can count. Perhaps more worryingly, only a short time away from it has it fade from my consciousness almost entirely. 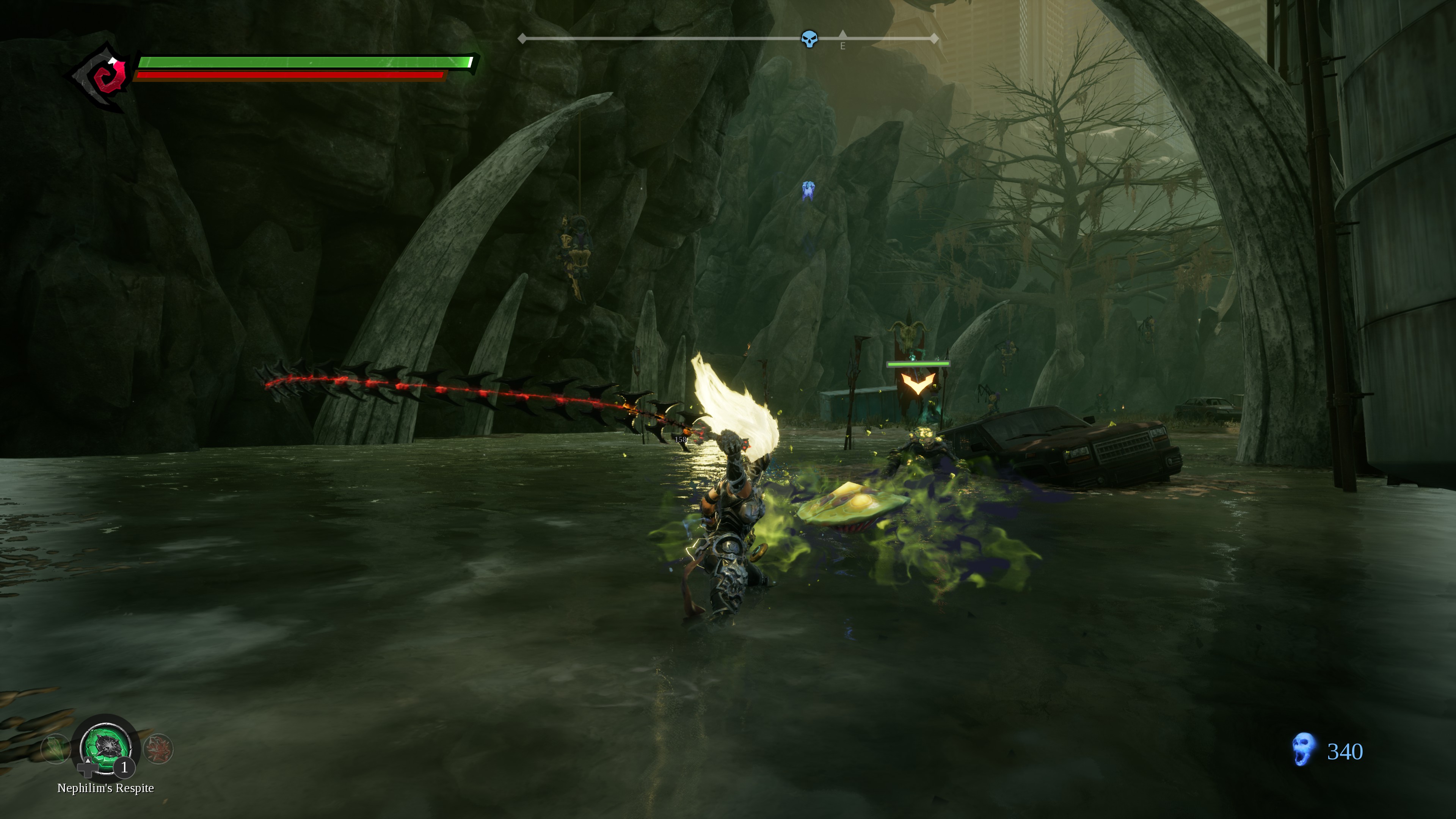 It's a slight affair all-told, the character/weapon upgrade system drably functional, much of the combat and environments routine, the plot generously described as forgettable. Often, it fully gets away with not being the beneficiary of big, fat THQbucks, as its predecessors enjoyed, but sometimes its (presumably) slightly more humble THQ Nordic budget is more apparent.

But then it'll drop a scene that I want to screenshot again and again on me, or I'll wander into a massed argy-bargy between rogue angels and festering demons, and start slaying with wild abandon, an engine of particle effect destruction. All those sudden deaths by bugs while traipsing through a cramped tunnel the camera angle can't really cope with fade away and I think 'this is exactly what I need right now."