As much as I think Destiny 2's Guardian Games is a disappointing grind-o-rama, I must concede that the event's merch is cool. For each of the three classes, Bungie are selling a little supporter's pack with a scarf, a felt pennant, and an enamel pin. I don't buy merch but even I will concede that's pretty neat. Bungie are good at merch in general, and I do like how some if the fanciest items are locked behind in-game accomplishments or achievements. If you want to buy the t-shirt, you need to have been there and done that.

The Hunter, Titan, and Warlock Guardian Games Boxes are three such items. As is the way with challenge-gated merch, it has a default price of €777,777 (£675k) but playing enough Guardian Games to earn the event's Ghost shell also gets a code bringing it down to €50 (£43). Still pricey but hey, that's merch, baby.

Earned merch is clever. Trinkets and shirts are a way for people to celebrate their fondness for a game while not playing, so merch celebrating your in-game accomplishments is doubly neat. Even if accomplishments in Guardian Games are just grinding tedious bounties grumble grumble.

This isn't just in events. Bungie also sell special jackets to players who complete new raids soon after they launch, at the point where they're still novel and a decent challenge. Here's (clearly a mock-up of) the Crown Of Sorrow raid jacket: 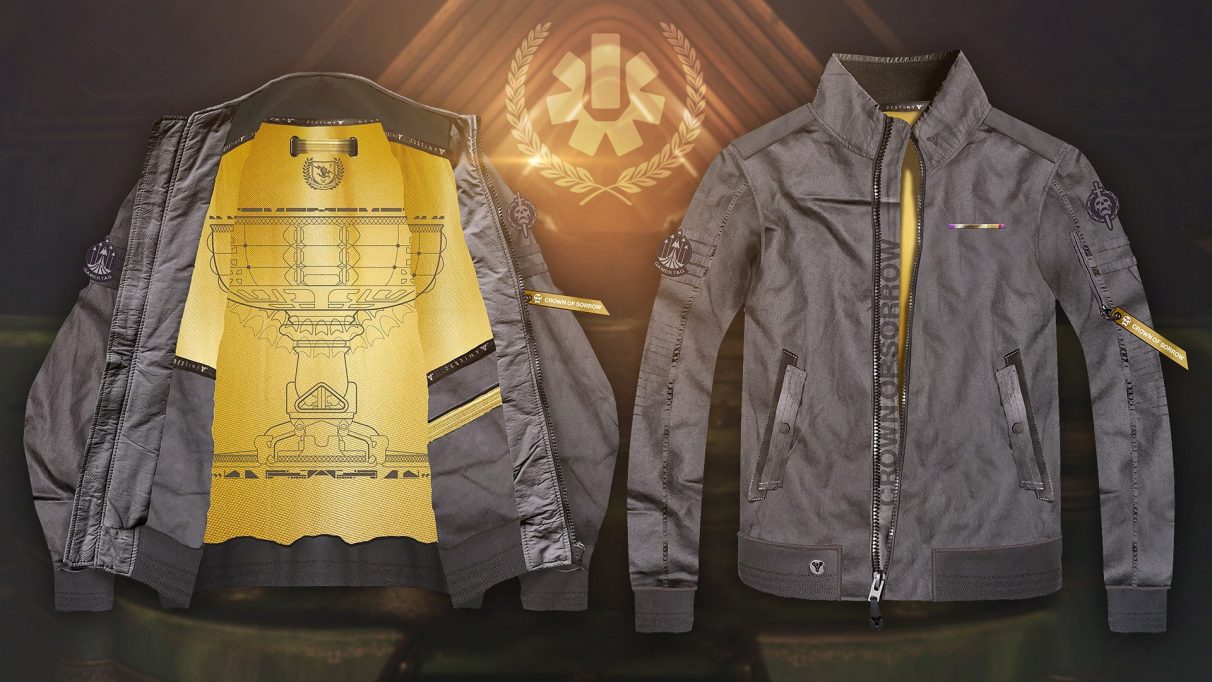 That's decent, as video game merch goes. I know someone in my raid group bought the Garden Of Salvation raid jacket. Bungie are generally good at garments which aren't clearly ghastly video game merch. Sure they do sell t-shirts with the game's name and that, but much is way more subtle. Here's the £40 flannel shirt you can buy this season after completing the quest to get a new quad-barrelled shotgun, The Fourth Horseman: 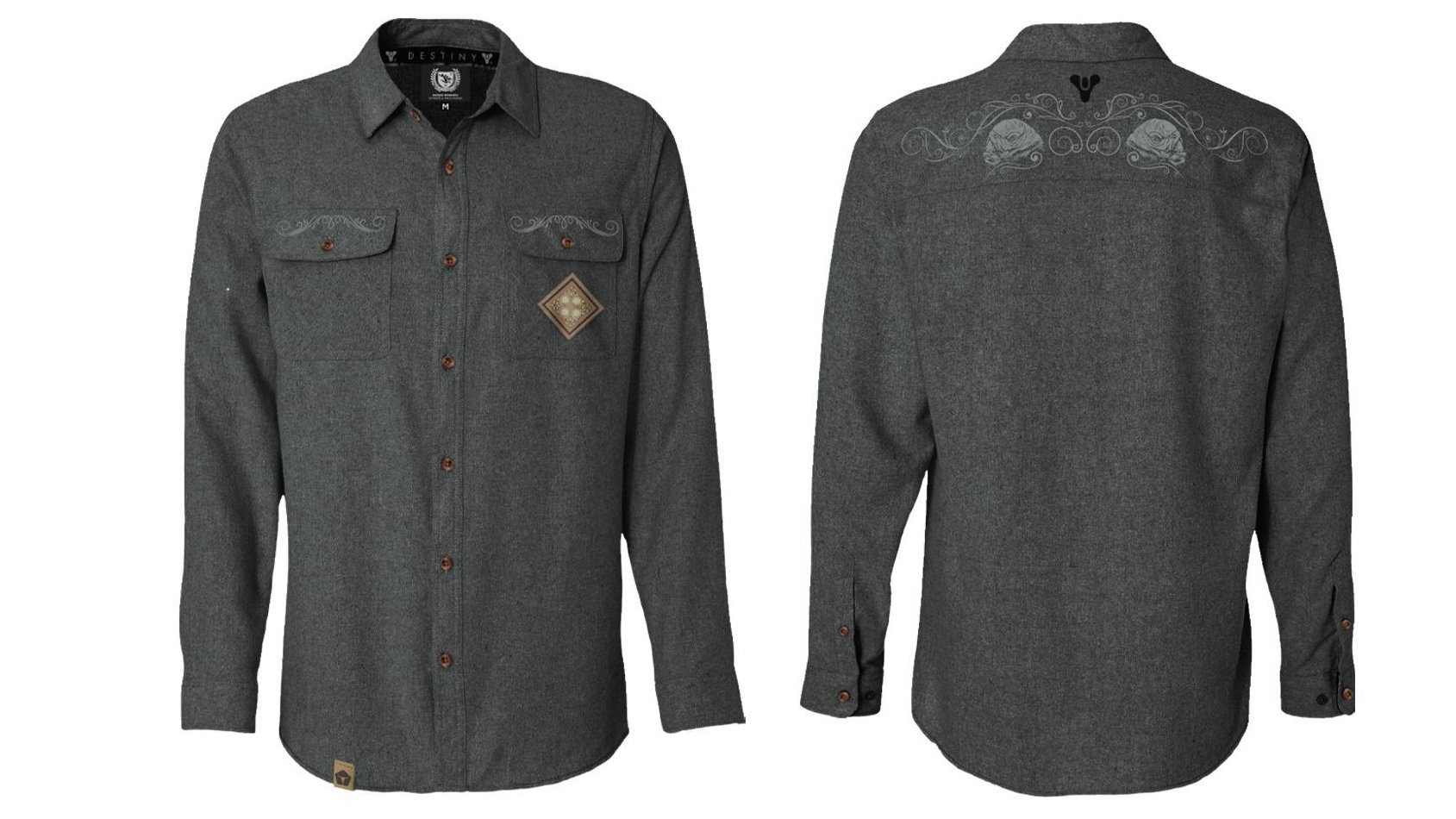 Even with the heads of a decadent, planet-drinking alien emperor on the shoulders, that's still mostly a plain ol' shirt. I think you'd need a certain style to pull it off, but it could work if you were so inclined.

It's not just clothing either. They also sell pin badges to players who earn in-game titles by completing certain achievements. Neat little things. 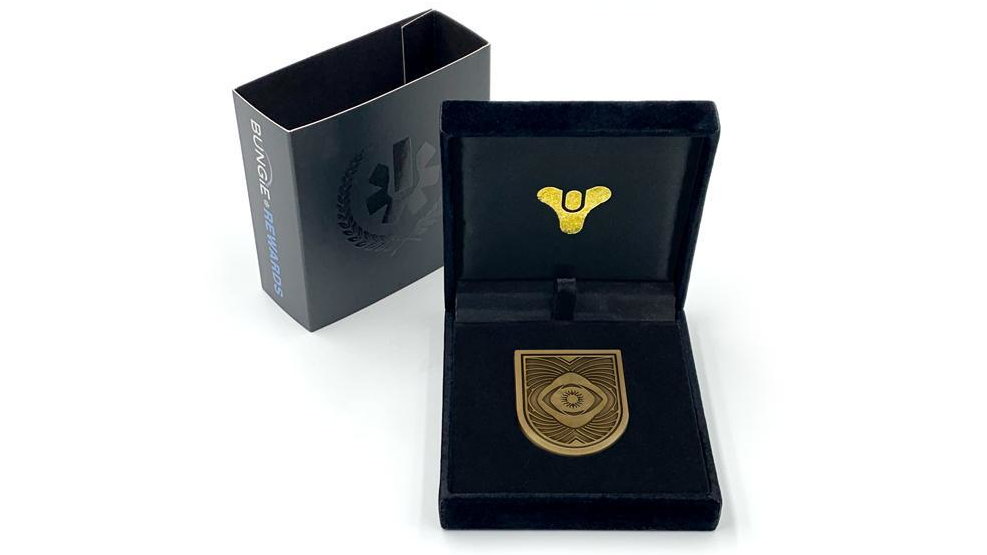 Though if you played enough Gambit Prime to qualify for the Reckoner title pin in time, frankly Bungie should've sent you that badge for free. There was a real struggle.

I cannot stress enough: I do not buy merch. I still think this is cool. Having been there, done that, and bought the t-shirt might earn you bragging rights in certain circles (I have no idea) but mostly it makes merch more special to the person buying it.