I'll defer to m'esteemed colleague Pip in terms of opinions about Destiny 2 [official site]'s PC beta (coming this evening - ed), currently open to pre-orderers and then for the whole wide world from 6pm UK time/10am PST today, for she has spent significantly more time than I in the Crucible. What I can do is give you a good sense of Bungie's long-awaited return to PC-based shootybangs runs on a variety of system, how good (or otherwise) it looks, and the more nebulous but more important business of how it feels on our WASDy weapons of choice.

First, let's talk performance. It's good news all round here: even in beta form (and still some weeks away from the full PC release on Oct 24), Destiny 2's tech seems to be extremely efficient. I've tested it on four different graphics cards at a range of settings, and experienced nary a hitch.

Right at the top end, my e'er-unflinching GeForce 1080 Ti (paired with an Intel 7700K CPU) could run the beta at 3440x1440 maxed out with the exception of antialiasing, which I had to drop from MSAA to either FXAA or SMAA, and sat happily in the 60-100 frames per second bracket, usually landing in the mid-70s. With MSAA on it fell to 45 FPS, but you're a far more detail-obsessed human being than I if you can meaningfully spot the difference between the three AA techs while you're running around spraying bullets at whatever evil aliens are causing problems this time.

With the res dropped to 1920x1080, MSAA was no longer a problem - Destiny 2 ramped as far as it would go then wandered between 60-90 frames depending on the scene/action here. I don't have a G-Sync/high frame rate monitor, but that result implies the game will do well on one of those if you're running it on a high-end GeForce card. 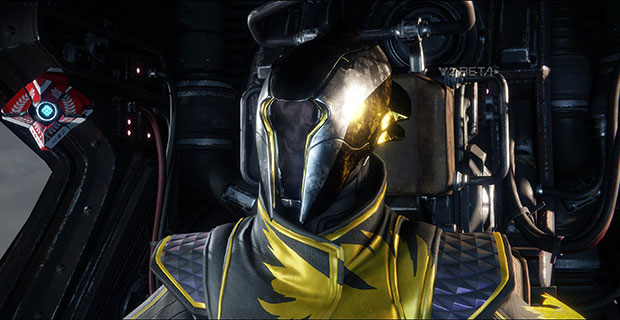 Down in the mid-range, an AMD R9 Nano hovered around 30-40 FPS at high (not highest) settings at 3440x1440, which is more than playable and a very good result for that card given the whopping resolution. Dropping down to a more sane 1080p yielded the magic 60 frames per second at High settings, and I was even able to turn a few options towards highest without the frames dropping far. Like I say, this game seems to be extremely well-optimised.

And dropping down towards the lower range, a GeForce 1050 Ti 4GB (running on an Intel i7 7700HQ mobile CPU) was equally barely bothered by Destiny 2. It cranked out 60 frames per second at 1080p at High settings and, as with the R9 Nano, I could turn on a few Highest settings and have the same result. Maxed-out bar anti-aliasing, again using FXAA or SMAA instead of MSAA, yielded 30-40 frames per second, so if prettiness is more important to you than performance, you can have Destiny 2 looking its best and being perfectly playable even on fairly affordable hardware. Though the 1050 is a newer card, this speaks to the kind of result we'd get on the older but punchier likes of a GeForce 960 or 970, or Radeon 280/290. It's good news, in other words.(30FPS 3440x1440 was possible on the 1050 too, but required a mix of medium and low settings - in any case, I think it's unlikely too many people would be running that kind of res on that kind of card). 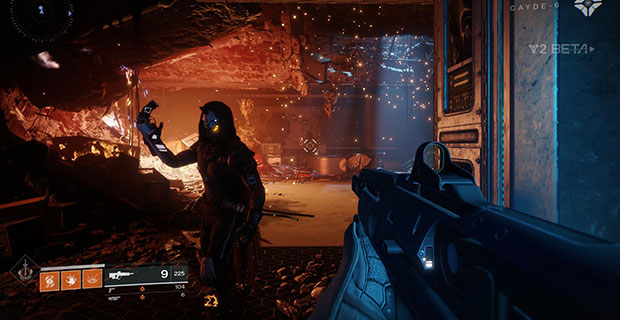 Just for kicks, and even though it's below the minimum spec of a GeForce 660 or Radeon 7850, I tried running Destiny 2 on Intel integrated graphics, specifically the Intel HD 630 built in to the 7700HQ processor (and which is pretty much the same GPU as in the earlier 530 on Skylake chips). 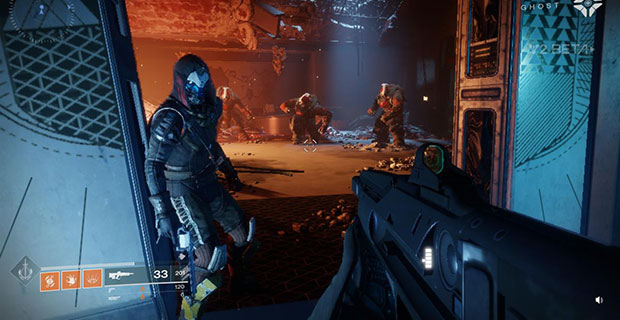 Whether it's actually playable or not is going to depend on your own personal tolerance for slowness and jerkiness but, for what it's worth, I managed to achieve a framerate that danced between 20 and 30 frames per second at rock bottom settings, 720p resolution and the in-game render resolution dropped to 75% (i.e. the 3D elements of the game are rendered at just 75% of the listed resolution, which means a blurrier and more aliased image but more performance). It spent more time close to 30 than it did to 20, and didn't look quite as horrible as it might sound on paper.

What I'm saying is, if you're desperate for a Destiny fix while you're on your travels, it's definitely possible, particularly if you stick to shooting AI baddies rather than live humans. Destiny's a game designed for the slower controls of gamepad, and that means it's also forgiving of playing at a reduced framerate, even if it obviously doesn't look or feel as nice. 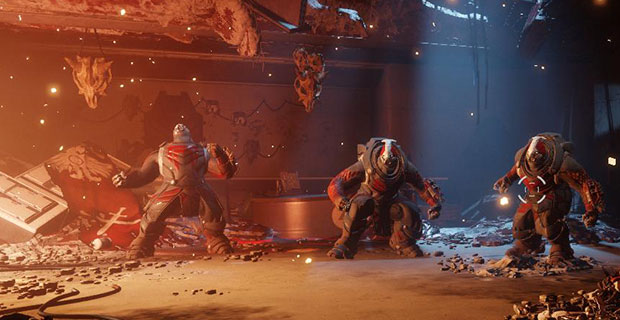 Speaking of how it looks and feels, how does it, uh, look and feel? Well, I'm not wowed by its appearance personally, but - oh no opinions - that's because its art style has, inevitably, much in common with the somewhat sterile and muted look of the first Destiny. There's nothing that particularly pops - with the exception of some dramatically gigantic space-architecture during an opening mission that concerns a shock invasion of the Guardian's home. There's a couple of reasonably striking scenes, but it returns to gloomy metal spaces pretty quickly. Early days and limited missions in this beta though - hopefully we'll get brighter and greater outdoorses in the full game.

All told though, it looks like a multiplatform triple-A 2016-2017 shooter would broadly be expected to look. No rulebooks are ripped up on that front, and it certainly didn't give me the sort of itchy screenshot figure I get with some games, but equally there's nothing to actually complain about - though I can speak only as myself there, that being someone who'll grumble if some graphical element looks particularly bad but does not feel anger if it is merely so-so. Some of the textures are not the crispest, but so far it's been the kind of stuff you have to look for rather than the kind of stuff that jumps out at you. 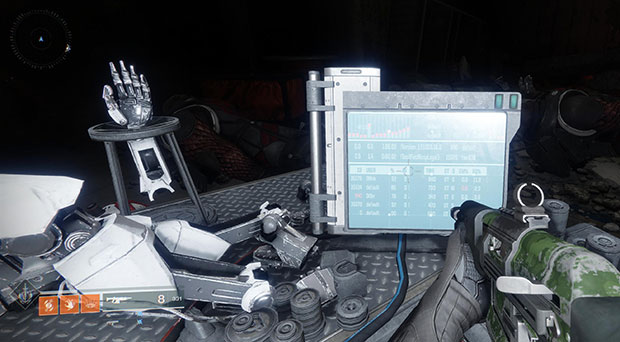 I think the lack of much vibrancy to its gloomy colour palette is Destiny 2's worst graphical sin, and find its exploding spaceships and flying robots far more boring than they should be as a result, but in fairness mainstream techno-shooters are as mainstream techn-shooters do.

What I would note is that moving settings between Medium/High and Highest didn't make a vast amount of difference to me, and even Low was not an agonising lurch downwards in visual quality, as least compared to how this can go in other games. Sure, if you stop and look closely you can see it, but by and large this is not that kind of game. Higher resolutions and framerates aside, don't expect too much to willy-wave about if you run this game on a high-end card. 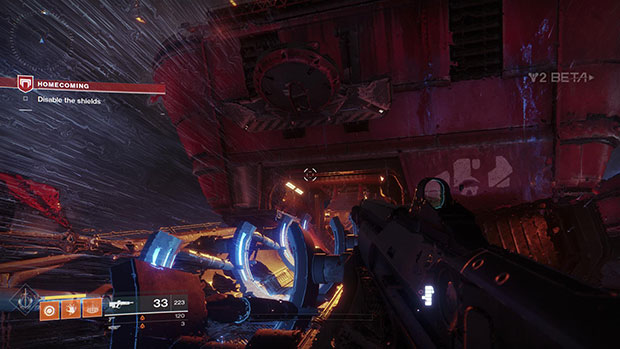 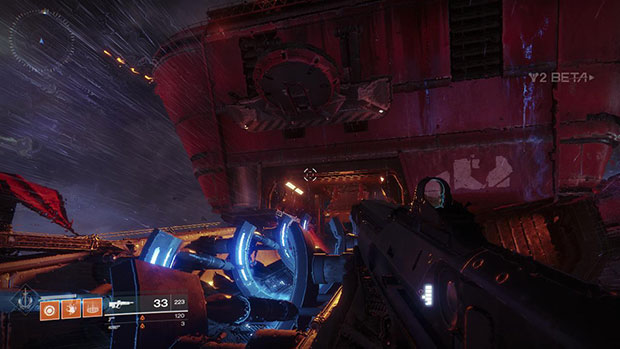 Feel-wise, I don't have any particular complaints about either interface or controls. A couple of times I felt as though the shooting was perhaps a little light and floaty, but if I'm honest it might be that the issue was getting confused by memories of playing Destiny 1 on PS4 with an angrily rumbling pad in my hand, and the silence of a mouse is a very different prospect. Far more importantly though, I didn't notice any of the mouse smoothing or errant acceleration that PC versions of big games often get eye-rolled about.

This is a fast game with responsive controls, and it feels like a proper keyboard and mouse game, not a gamepad one going through the motions - again, with the possible (and vague) exception that it didn't always feel as though I was physically unloading a hail of bullets into hulking baddies. Is this a rumble thing, or is it to do with the animations and other feedback we might expect from NPC-shooting? Hard to say, but I will say that it didn't take long to stop thinking about it, in any case.

With another two months of PC development to go (though console versions launch much earlier, on Sep 6) it might be that the colours and/or a certain tactility when you shoot a dude upside whatever passes for his head will yet be amped-up in the weeks to come. Far more important, I think, is how smooth this thing runs on a wide range of hardware. Like their stablemates at Blizzard, Bungie like to target the mainest of streams, and making a game that plays well on lowish-end PCs is a crucial part of that. It's often the case that a game made primarily for consoles isn't anything like as optimised on PC (although PS4 and Xbone's far more PC tech-like nature is closing that gap in some cases), but clearly in this case they've done the work and made a hyper-efficient game.

We'll have thoughts on how it all plays later today.