Amid the megablast of news about Destiny's future yesterday, Bungie started the latest season, the Season Of Arrivals. After nine rocky months of decreasingly good seasons in Destiny 2, Season 11 feels like Bungie are starting to turn a corner. I don't know how I'll feel about Arrivals in two months, but right now I'm pretty excited about a lot of its newness. Not just because I get to spend a lot more time with my shady spaceuncle, Drifter.

The story feels like it's going somewhere. As much as I like Destiny telling a squillion stories in the background at all times, something has to happen in the foreground. Season Of The Worthy in particular felt a waste of time, hiding important developments in the background while focusing on the Cabal - who we thoroughly smashed in the original campaign three years ago. Now Arrivals kicks off with a new story mission and hey, look, surprise, one of those naughty Pyramids has popped over for a chat, some folks are thinking we should attempt conversation, and the Hive are trying to interrupt our fledgling relationship. Things are happening! It helps that Bungie announced the next three seasons too, which give hints of where it's going - and that it is actually going anywhere.

A new dungeon is a great surprise. While I need a few more levels before I'll head into Prophecy myself, I welcome this surprise addition. Dungeons are a good mid-point between Strikes and raids, with a good slap of puzzling and spectacle but less of a commitment or challenge. Some of my raid group have lost interest after a run of bad seasons so hey, it's easier to get three people together. And a lot of Prophecy looks very pretty:

We get to hang out more with Drifter, my favourite Destiny character. I'm still not sure what our enigmatic spaceuncle is up to but he's a great laugh for now. He plays a big part in this season, offering his expertise with Darkness and building the gadgets to fiddle with Umbral Engrams, this season's way to have a say in loot drops. Being a funny little show-off who enjoys riling folks up, he's recorded voice lines for his Umbral Decoder to play even though he stands literally metres away from it at all time. Here's a few of them:

The new public event is more fun than Seraph Towers, at least. While Seraph Towers asked us to ignore the swarm of enemies across the map to focus on defending the point, this is all about running around shooting stuff. Using familiar elements of Gambit mode seems to have randos understanding how it works more too. It is a shame that it is another unmatchmade public event, like Seraph, though I think that's less of a problem here. It's easier, for one, and you only activate the tougher mode if you intentionally try to. It awards Bounty progress even on failed attempts too, unlike Seraph Towers. While I'm sure the novelty will wear off before season's end, it's a fun blast of action.

The new swords are great fun. Swords are strong lately in Destiny but functionally most have been identical, and those which are different were class-locked. The new Temptation's Hook introduces the Caster Frame type, which can right-click to fling an energy blast - similar to Black Talon (or Boltcaster from Destiny 1) but not taking up your Exotic slot. Or perhaps you'd rather Falling Guillotine, the first Vortex Frame, which can do a spin attack around you (like Destiny 1's Dark-Drinker, I'm told). I'm very pleased with more sword variety. Also, they're chuffing ridiculous giant things: 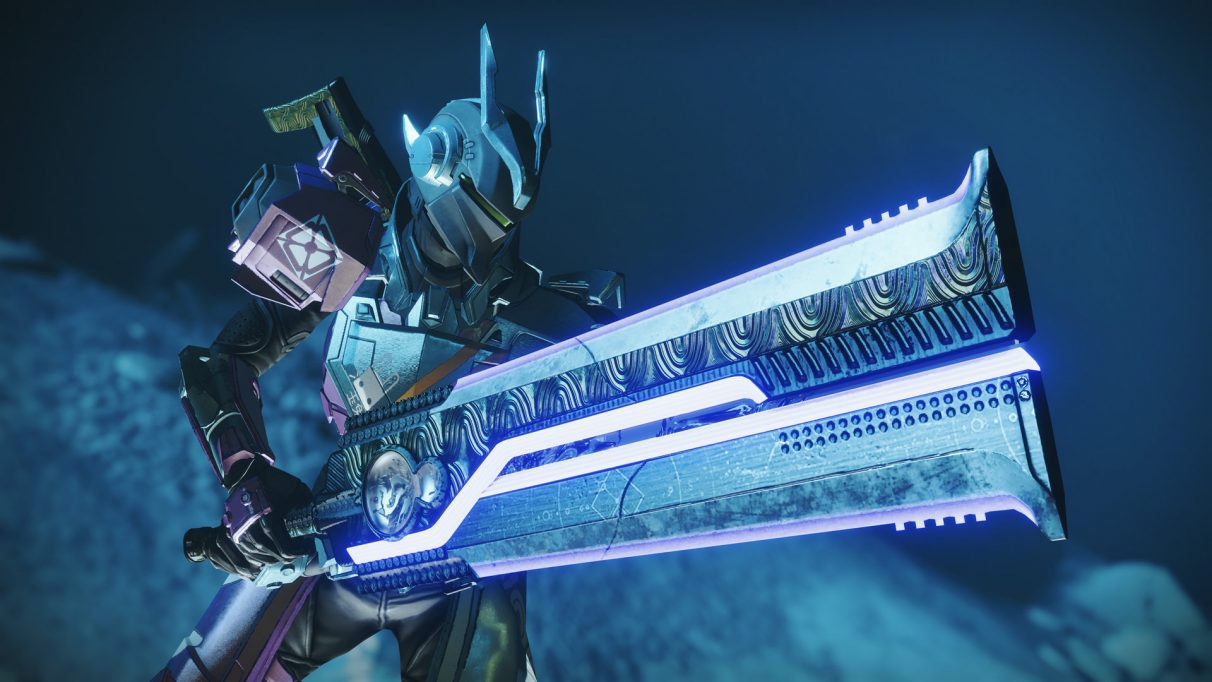 The new weapon perks in the pool are interesting too. Killing Wind gives a short burst of bonus mobility, range, and handling after a kill. Sympathetic Arsenal reloads all stowed weapons when you get a kill. Unrelenting triggers health regen after a few quick kills. And dataming shows wild trade-offs on two upcoming Iron Banner perks. Should be fun.

The fashion is fantastic. The new seasonal set, Holdfast is some of the nicest regular armour Destiny 2's ever had. The mix of heavy-duty fabric with ribbed leather, thick metal panels, and chunky screws is striking and tough. The unlockable Ornament version, Siegebreak, is even better. Guardians in Siegebreak gear look like they were sat inside a JCB when it went through a crusher. That is armour for kicking in spacetriangles. (It's also a bit Anthem-y.) I'm glad Bungie put the new Daito Foundry set (which has a sort of anime mecha vibe) in the dungeon, rather than on the Eververse premium store as they usually would have. 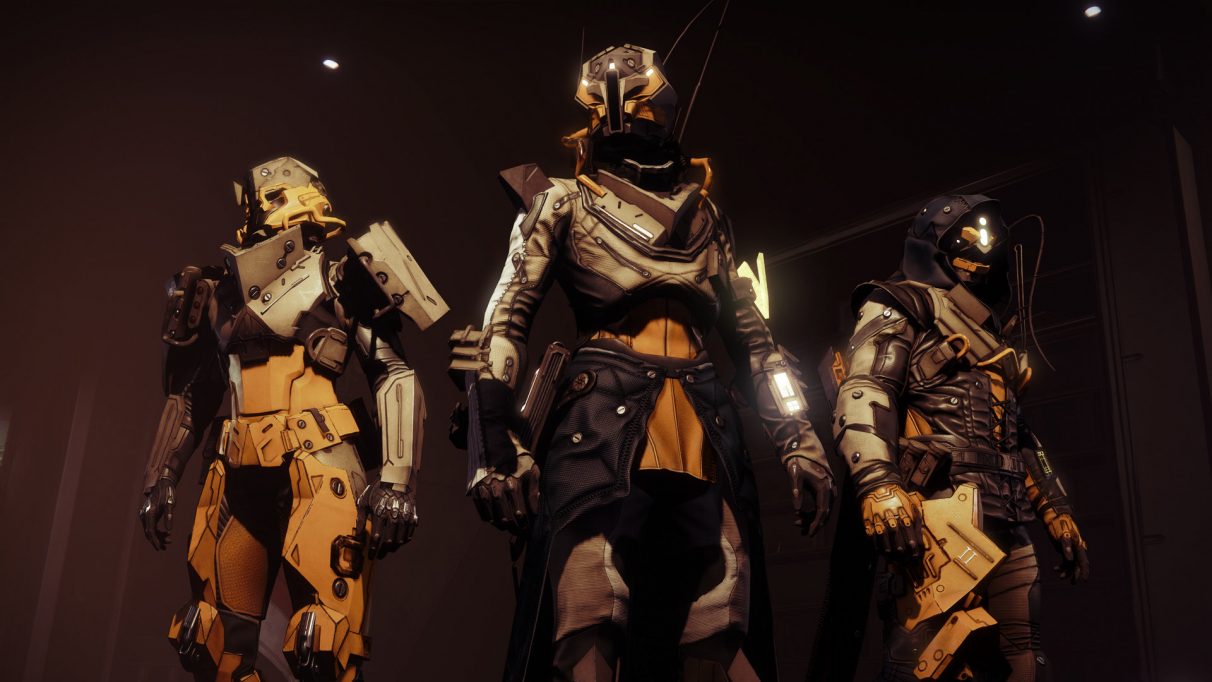 But 'sunsetting' gear is off to a bad start. This is the season Bungie officially launch their plan for quietly retiring weapons and armour by putting a Power level limit on how high we can infuse gear. The idea is that (non-Exotic) gear will get to be up at the highest Power level for one year after their season started, then go no higher as the max level keeps increasing across seasons. Power doesn't mean anything in many Destiny modes but old gear will start to drag you down in new raids, dungeons, and seasonal activities, as well as Power-enabled PvP like Trials Of Osiris and Iron Banner. Part of that plan will include 're-issuing' some gear in later seasons, and Arrivals shows that's done in a frustrating way.

While a few guns have been re-issued in Arrivals with identical stats and perks, their new cap is not retroactive. Your old Gnawing Hunger is capped to 1060 while the new ones are capped to 1360. Yeah yeah it's way easier to grind Gnawing Hunger now it drops outside Reckoning (and that's great!) but it's frustrating if you've already put in the work. And I still don't know why Bungie are capping armour. This is their first crack so fingers crossed for corrections. I'm not super fussed about retirement (hey, nerfs have effectively retired loads of my favourites before) but Bungie need to prove it's worth the inconvenience.

All in all, my spirits are lifting. After the duffer that Season Of The Worthy, Arrivals is off to a good start and I'm eager to see where it goes. I'm not sure how it will hold up until September and won't get too excited just yet, mind. Even Bungie have said the lessons they've learned about Destiny's FOMO problem and other issues shouldn't really kick in until Year 4, which starts with the Beyond Light expansion in September. We can see they've tried to make some changes, such as putting the Eververse set into Prophecy, but long development times mean a lot of Arrivals was set in stone when Bungie were still building on bad ideas. But I'm looking forward to Beyond Light a lot more now.