Along with a new dungeon and Halloween event, yesterday's Destiny 2 update slipped in a surprise new open-world public activity on the Moon, named Altars Of Sorrow. It is a beautiful demonstration of how, sometimes, the saviours of humanity are so drunk on loot they'll idly blindfire into an enemy spawn point until the ground glitters with goodies. This is how Altars Of Sorrow goes. Between item drops, ammo boxes, orbs of ability energy, and Halloween candy, it soon looks like a Christmas where I'm opening gifts using an SMG. And then the game goes "Hey, you paying attention there?" and kicks you square up the arse.

Set at the gates of the Crimson Keep in Sorrow's Harbor on the Moon, Altars Of Sorrow is a wave survival mode similar to Escalation Protocol on Mars. Dozens upon hundreds upon thousands of trash monsters pour out of a portal, trying to reach another nearby portal and sacrifice themselves. Shoot them and you get extra seconds on the clock. If the regular boss spawns reach the portal, they take big chunks out of the timer. By and large, you can idly spray bullets towards the portal and just watch the bodies (and loot) pile up. It is not difficult.

I enjoy this burst of pure murder. Six people fire everything they have at a continuous torrent of horrors in a grand display of tracers, explosions, magic powers, and item drops. It is even dafter than Escalation Protocol because even the wave bosses aren't tough. Sometimes I'm an idiot who just wants to spawncamp moonmonsters and watch their corpses rain candy. I like it when colours happen. Then the big lad arrives. 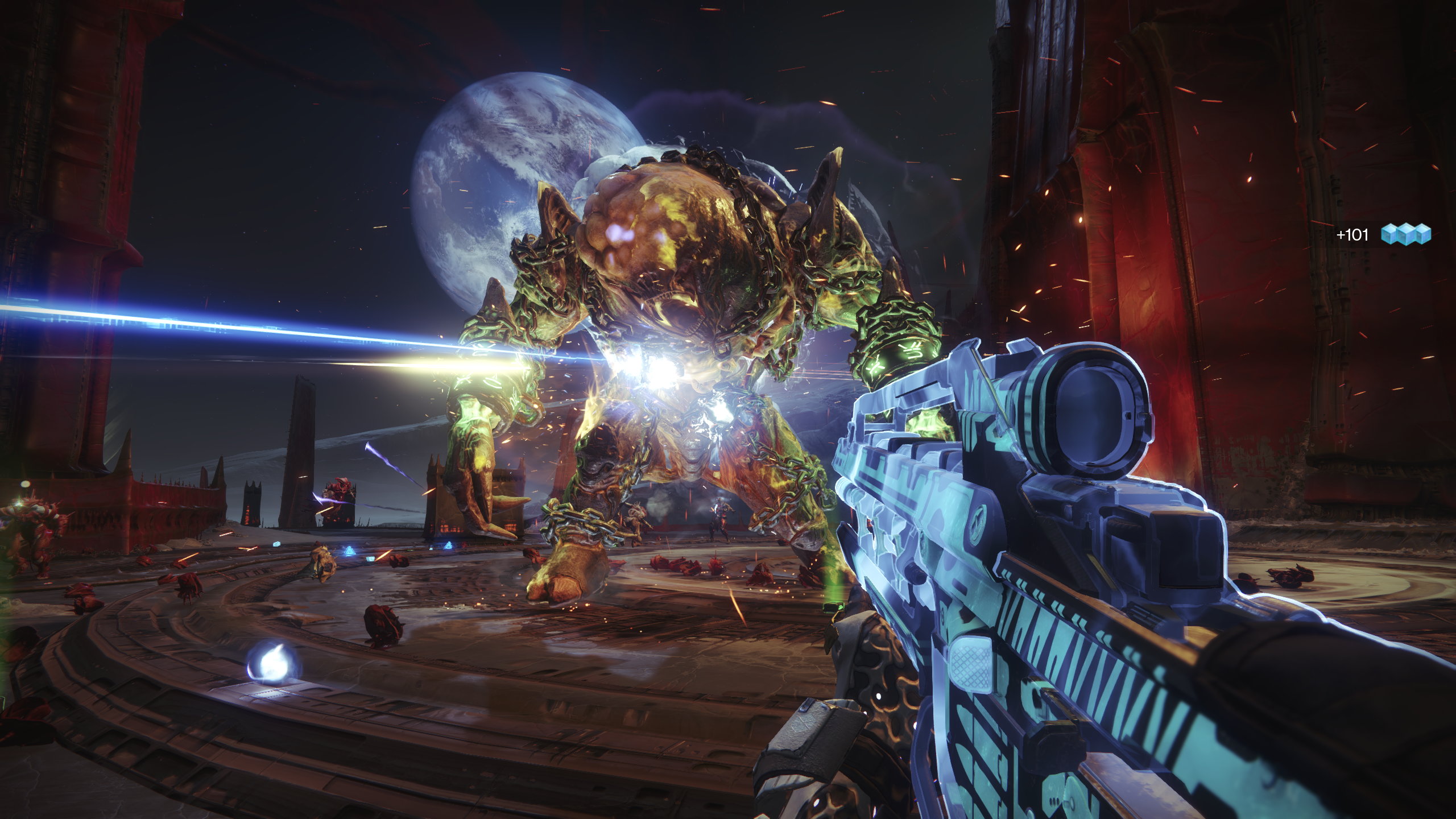 The sixth wave is the big boss battle. He can and will murder you but, more than that, the steady race of minibosses towards sacrifice portals is now a real threat. If you're not on the ball, they will sprint right for the goal and win in under a minute, sending you back to repeat the previous wave. For five waves, you're fine as long as one player is vaguely paying attention to bosses. Now, out of nowhere, you need teamwork - and to stop just spraying bullets at the spawn portal, you lootdrunk fool.

The boss isn't particularly difficult but the contrast between spawncamping a torrent of trash and needing to chase down bosses does make me laugh when I see people suddenly realise what's going on. It usually takes one failure and repeat for assembled groups to understand they should probably pay attention.

I'll be sorry when the Halloween event ends and takes away the shower of blue candy pyramids. They're not even that valuable but the sight of them raining down is such a joy. I should be working to stop an ancient evil. I am instead taking candy from spacebabies. 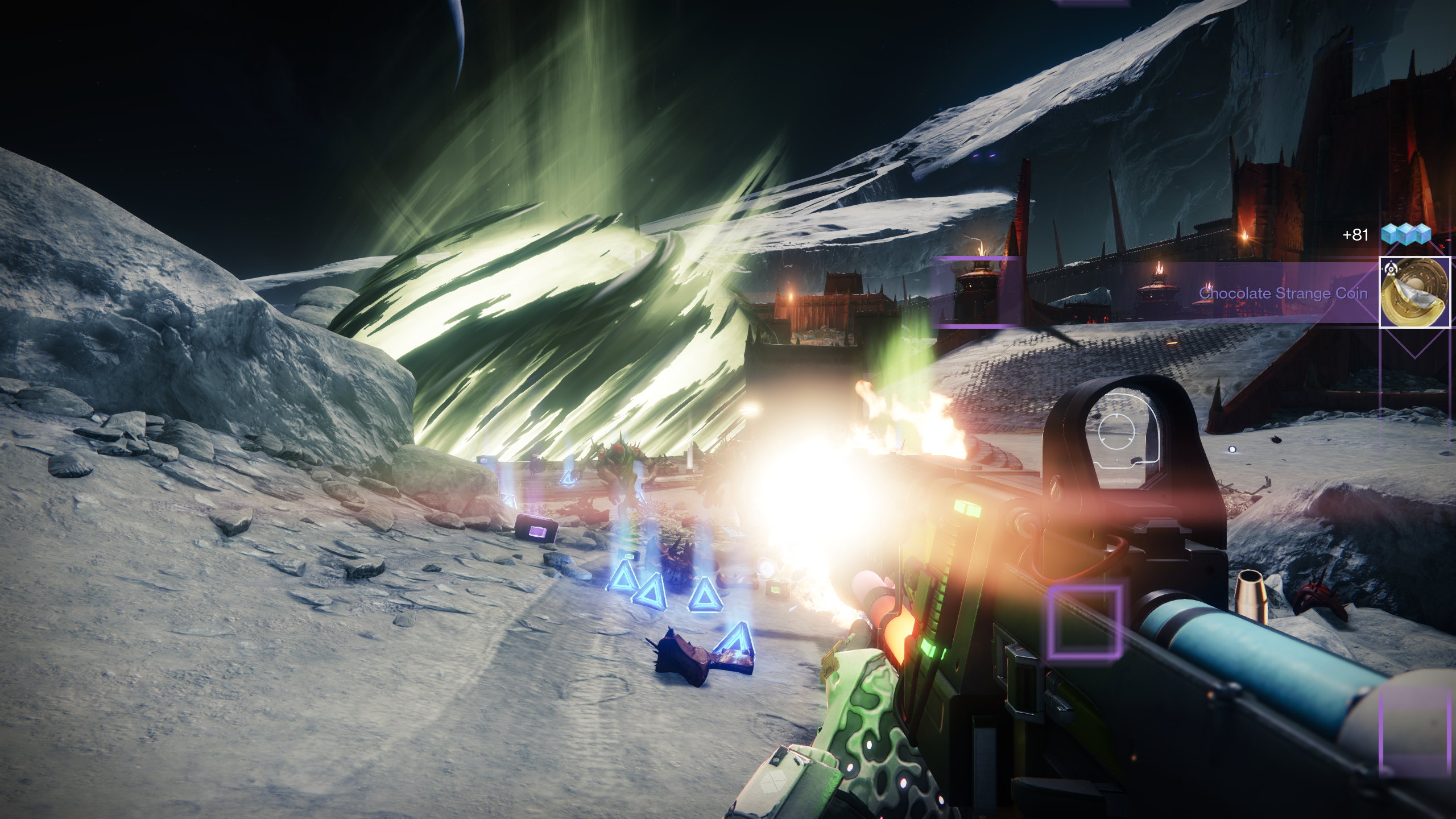 I've just realised that "blindfire into an enemy spawn point" is basically Ikora's plan for dealing with the season's big Vex villain. She's building a portal in the Tower so she can shoot into its face without even leaving the house. We're heroes.