A whole lot of haunting hits Destiny 2 today, with the start of its Halloween event and the launch of a new dungeon. Festival Of The Lost is for all players, sending us back along branches of the Infinite Forest to mash monsters and grab sweeties to swap for rewards. Destineers who own the Shadowkeep expansion get even spookier treats: a new dungeon diving into Hive horrors as well as a new Exotic weapon quest for an insect-powered machinegun. Candy, monsters, bug gun, gotcha.

Festival Of the Lost is headed back into the Infinite Forest for another sweethunt. Yes, it does have matchmaking, so you needn't find your own fireteam. We'll have 15 minutes to clear branches of the Forest, mashing monsters and gathering Candy and Chocolate Strange Coins. The Forest is a bit bland compared to the wonderful playground of the Solstice event's European Aerial Zone, but it is sufficiently spooky.

We'll trade our sweeties with our spacegrandma, Eva Levente, for rewards. She's got more masks and the big exciting reward on offer seems to be the Braytech Werewolf, a reprise of an old Warmind auto rifle now coming with a spiffy paintjob and random rolls. I quite like the Winter Wolf so new (and better) rolls sounds grand. The microtransaction store is stocked with Halloweeny things too, some for Bright Dust and more for Silver.

Running until November 19th, Festival Of The Lost is open to all Destiny 2 players, even free-to-play folks. See this page for more on the event. Eva's made the Tower look lovely too. I always knew Drifter would be well up for Halloween. 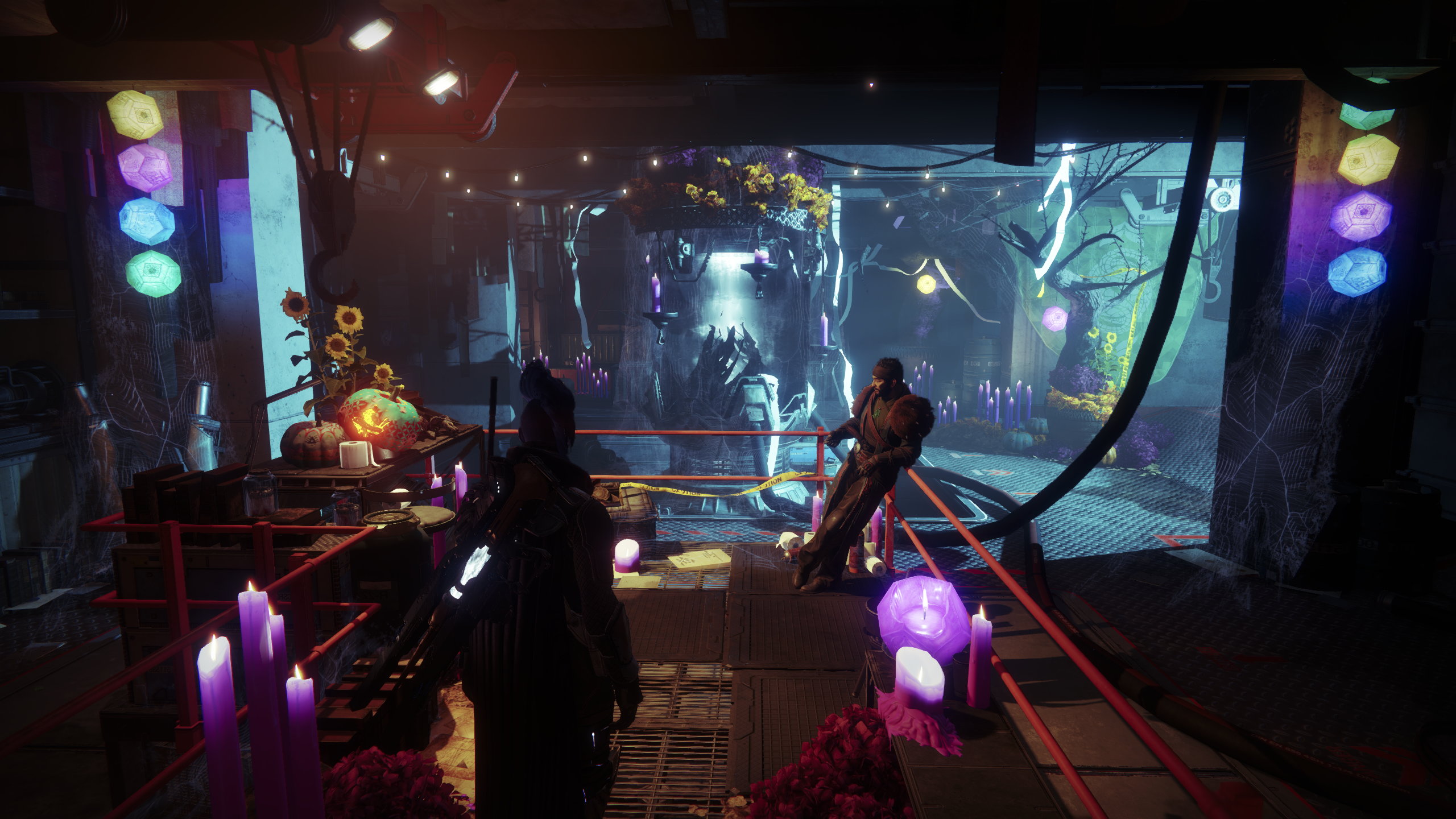 For Shadowkeep players, today sees the opening of the new dungeon, Pit Of Heresy. Like Forsaken's Shattered Throne, it's a repeatable three-player activity larger, more complex, and more challenging than a Strike but a bit less than a full six-player Raid. It's headed deep into the Scarlet Keep and ooh I'm keen to get stuck into this.

It ties into a new activity in Sorrow's Harbor too, Altar Of Sorrow. It's wave survival, somewhat similar to Escalation Protocol but with so many more enemies and trickier objectives to manage. I have murdered many moonmonsters (and stolen their mooncandy for Eva). 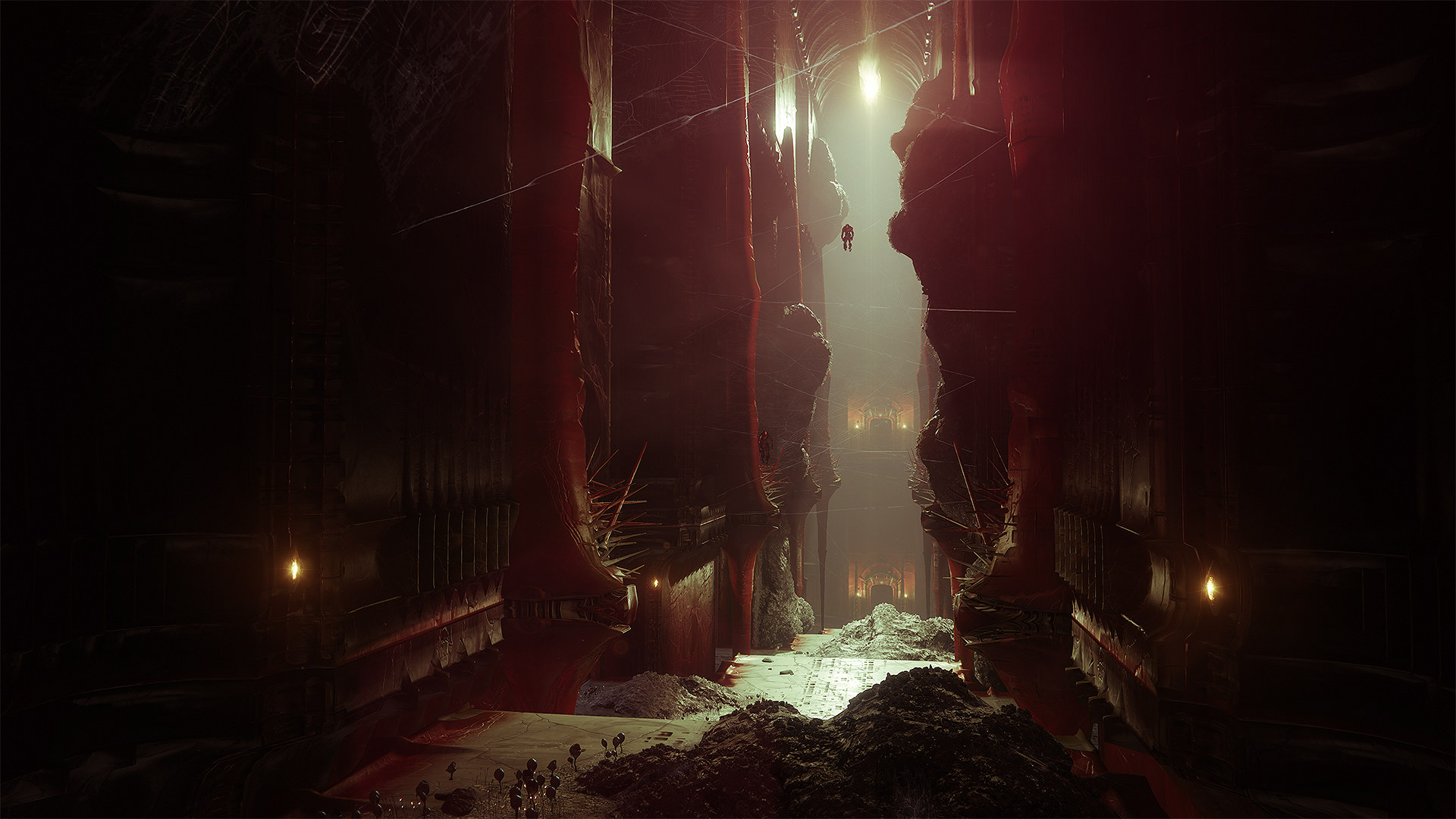 Shadowkeep also today kicks off the quest for a new Exotic weapon, the Xenophage machinegun. It's slow-firing and has a small ammo capacity but does pump out explosive bullets and is powered by an insect, according to the real-world replica Bungie have been showing for a while. Maybe an artist misheard the brief for beads on spooky moon guns as "bees".

A closer look inside the upcoming exotic machine gun. pic.twitter.com/Cwnpv6x5iW

Another big change is making Striker Titans slightly less ludicrous in PvP, with a nerf to how much Super energy they get back from a kill and regen not triggering on these kills. Hopefully I'll now only get trampled by the same thundering Titan twice in a row on a single Super rather six hundred. Gits. The Warlock's Everlasting Flames is tuned down a bit too, particularly in PvP. Striker Titans in particular were ridiculous and the obvious tree to choose. Maybe one day they'll buff more trees which suck. And to enjoy this less-gittish PvP, the new Momentum Control mode hit the Crucible today.