Somewhere above the clouds over Europe, powered by spacemagic, a few ruined city blocks and a whole load of rocks are hovering as a new playground for Earth's greediest heroes. This is the European Aerial Zone, host to a new cooperative mode in Destiny 2's Solstice Of Heroes event, which started last night and runs for a month. I adore the EAZ as a playground, leaping from rooftop to rooftop or barrelling through maze-like interiors while hunting bosses and treasure. It is a good place. So it's baffling that the wider Solstice Of Heroes event offers rewards which strongly incentivise not playing the mode.

To celebrate ourselves (not a euphemism), our magic pals have created the European Aerial Zone, a wee hovering chunk of city. It is filled with hidden treasure chests, and to find them we'll first need to kick apart a load of bosses. We oblige. Off we go into the depths of the city to hunt them down, doing spaceparkour between balconies, climbing broken buildings, getting lost deep in interiors, and generally having a gay old time hunting for baddies and goodies. 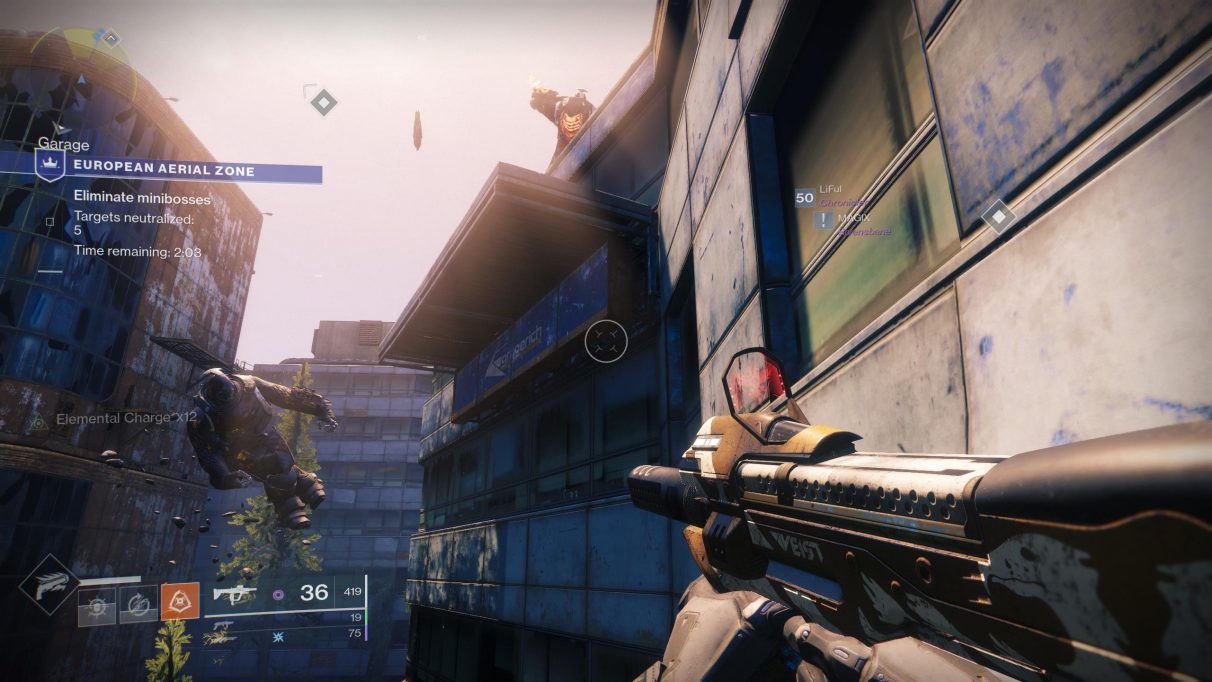 That's rare for zippy first-person shooters like Destiny 2, where cities are largely decorative. Your usual FPS city is a play space built from a few cuboids and bendy paths, wrapped in brick and concrete textures. It's a rare treat to discover not only can we go through and over so much, but we must. I don't want to suggest this is a full recreation of a city, with every floor and room open to explore; it isn't. But it's complex enough that I have to actually explore and probe paths to find my way between objectives. The vertical range of some fights is a joy too. And, y'know, jumping across rooftops is just fun.

The EAZ mode itself is pretty neat too. We start with five minutes to hunt down minibosses across the city, with each kill adding another chest to the treasure hunt at the end. Next we batter big bosses, some new baddies with some surprising new tricks. Then, the treasure hunt. Chests spawn up high and down deep across the city, and we're given only a brief glimpse at their locations before we're sent out to navigate the maze and claim our booty while a timer ticks down to the end.

That's good, that. I'm enjoying it. And not just because of jumping across rooftops. 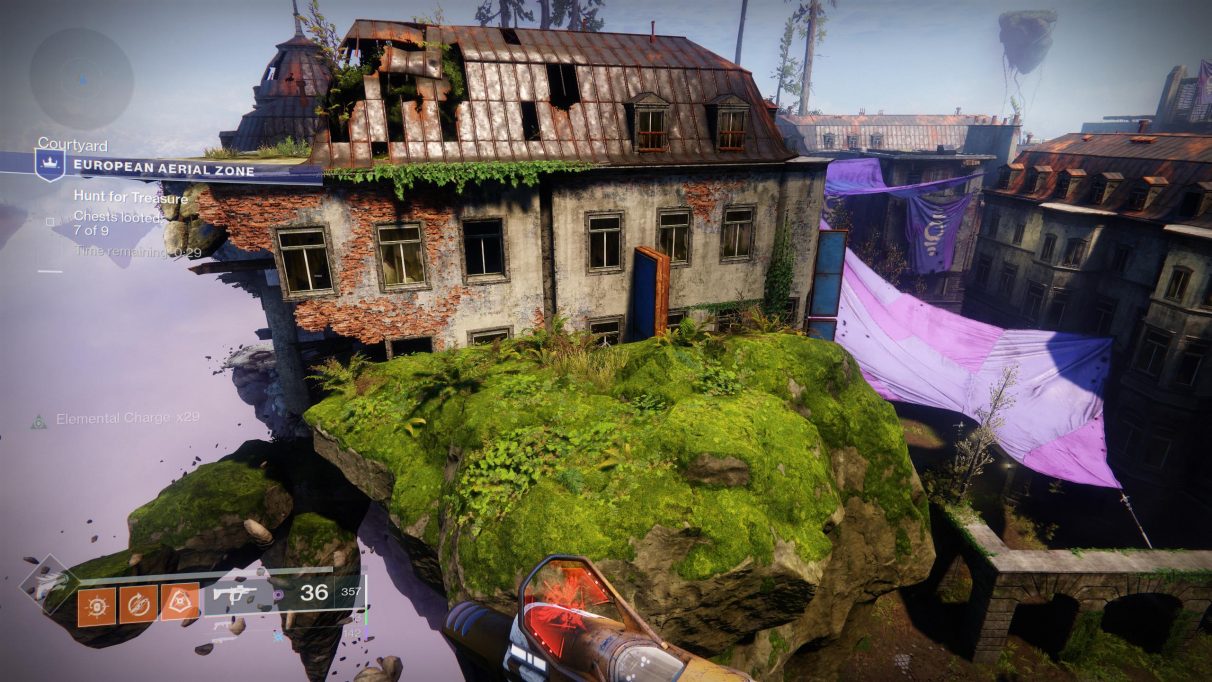 The weird part is, the rewards of playing in the EAZ are largely bad, often just trash blue items and a handful of faction tokens. The real reward of the whole Solstice Of Heroes event is a gleaming new armour set, all white and gold and chains like Michael Jackson's glam military years. This set will even carry over to the new armour system coming in September, so it's an opportunity to get a head-start. But the way to earn this armour set is mostly by not playing EAZ. 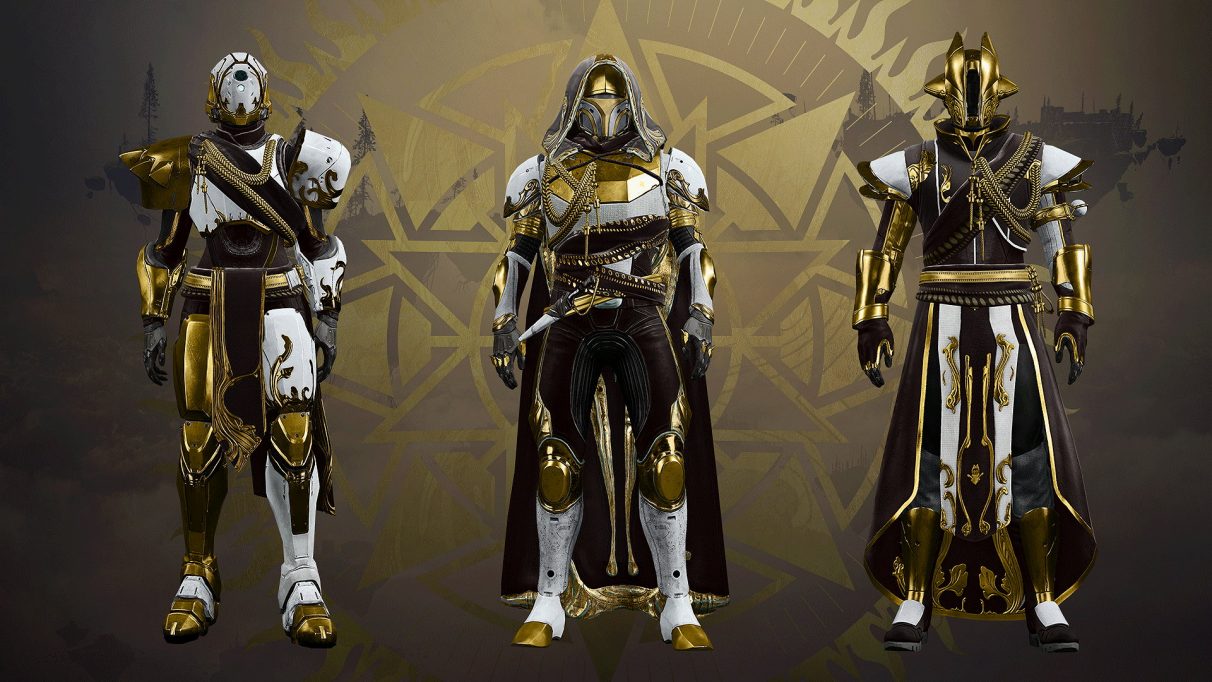 These sets, which have separate quest progress for each of your characters, require an ungodly amount of grind. The quest will send you to play dozens of Crucible and Gambit matches, Strikes, Public Events, Heroic Public Events, Patrols, Bounties, and more, racking up all sorts of elemental kills along the way. Some of the objectives overlap and some I will happen to complete while playing normally, and that's dandy. But many steps, such as completing 25 Patrols on Titan (busywork along the lines of 'kill ten spacerats', 'collect ten spacerat noses', and 'go here to kill a big spacerat'), are a waste of my time. Few quest steps are in the EAZ. 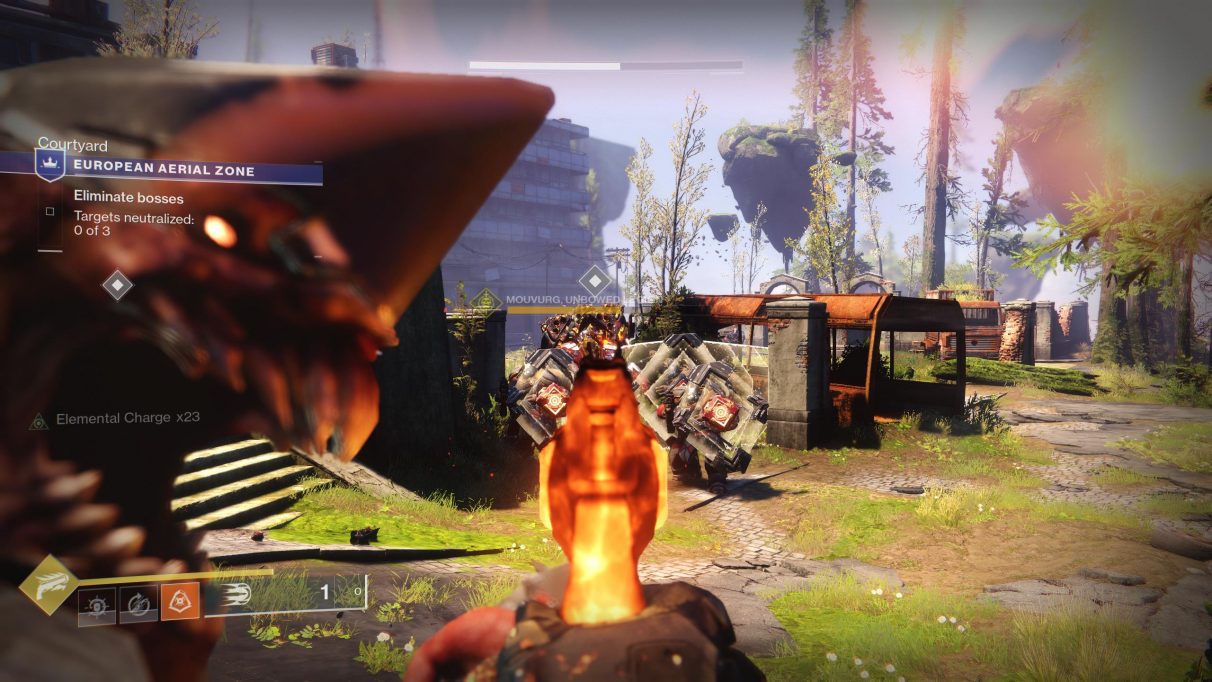 We do have four weeks to complete the armour quests. I suppose I could make a schedule to spread out the worse parts of the questline. But I don't want to do 25 Titan Patrols in four weeks, let alone the 75 it'd take me to complete the armour on all three of my characters. As someone who plays too much Destiny for my own good, I had thought I might get it for all my spacemen. Now I see how much grind is involved, eh, I might not complete it for anyone.

The EAZ treasure packages can offer new rolls of Solstice armour once you complete the quest, but for me maybe they'll stay sucky reminders that the questline sucks. Boo. 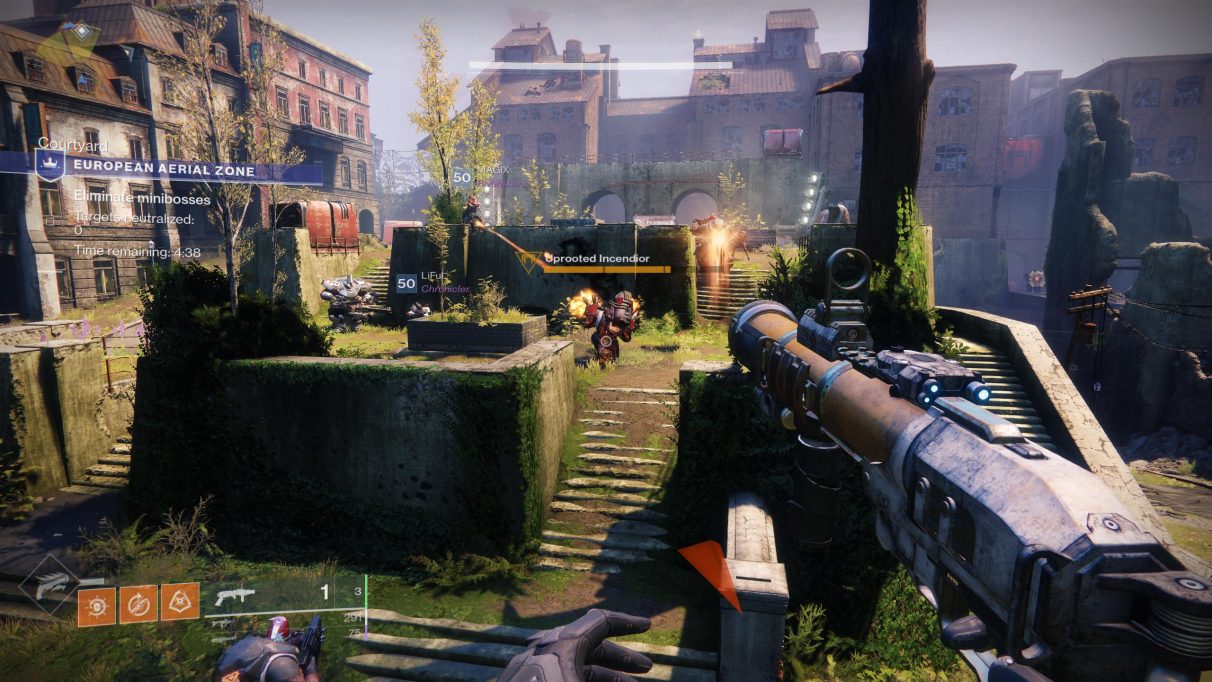 Oh, do note: the Solstice also has a whole thing about powering up elemental buffs with elemental kills. They're fine? Bit of fun. Far less disruptive than the Revelry event's balance-breaking fizzypop. And, unlike that magical elixir, these elemental auras are disabled in Competitive Crucible and Gambit Prime modes. Good, good.

To end on a cheerier note, there are some real gems among the Solstice's staggering number of beach-themed cosmetic items sold for various microtransaction currencies. The diddy toy model for spacebikes is... so good. 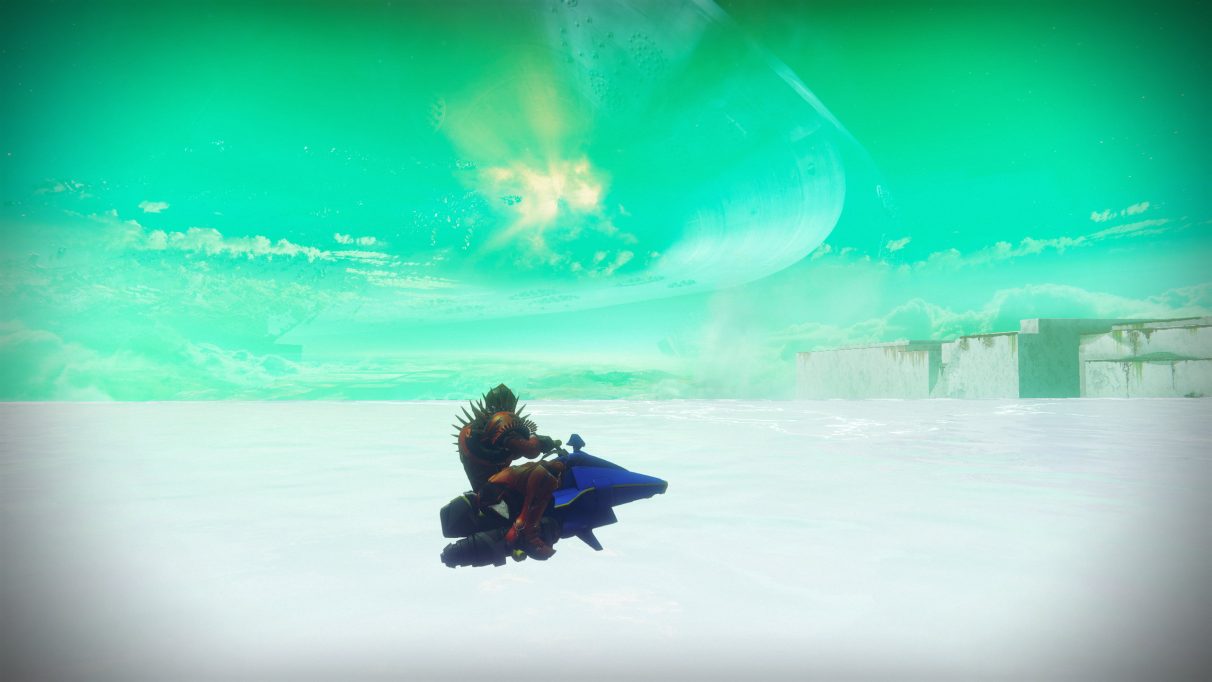 "LiiiPy" and pals raced a bunch of 'em through a section in one raid where a flaming spherical robot chases you through a drain: