Bungie still haven't even revealed the name of the new Destiny 2 season starting in three weeks, let alone what's new in it, but they are opening up about what it'll do to the old meta. On top of the sword changes discussed a few weeks ago, they have big plans for weapons including sniper rifles, long-range fusion rifles, and the exotics Lord Of Wolves, Izanagi's Burden, and The Last Word. I'll be sorry to stow some current favourites in my vault but I am theoretically glad for the freshness of a new meta for a new season.

The changes revealed in the latest 'This Week At Bungie' post are targeting both PvE's big-hitters and the PvP monsters. Go read that for full details on everything, and I'll briefly skim over it all here. First, the exotics.

Lord Of Wolves, the fire-spewing Fallen shotgun, will have "significantly" reduced accuracy when the 10-round-burst Release The Wolves mode is active. Good. To hell with that lousy gun. "With this change, Release the Wolves should be used at extremely close ranges against large targets instead of just being a better version of the default behaviour," Bungie say.

The Last Word, the hip-firing cowboy hand cannon, is being pushed to focus more on close-range gunslinging. Expect less range, less stability, and even less incentive to aim down the sights. I like TLW but yeah, it is too strong in Crucible.

Izanagi's Burden, the current favourite boss-bashing sniper rifle and general PvE superstar, is getting toned down a bit. The reload-speeding perk Outlaw is being released with the aim-stabilising No Distractions, and reload speed perks won't boost cramming multiple bullets into one Honed Edge shot. And sure, I accept it. Izanagi's chews through Champions without a second's afterthought and gives rad sustained boss DPS. It's great at everything. It sounds like it won't become pure trash but will no longer be ubiquitous, so sure.

More broadly, loads of weapon types are getting tweaked.

In what sounds like an attack on the Erentil FR4 and any children it may bear, fusion rifles are getting nerfs to range-range violence and the Backup Plan perk. Bungie are at least fixing an issue with aim assist that made sprays sometimes piss damage away bending towards heads but scattering around them, mind. As the ashamed owner of an Erentil with 88 range and Backup Plan, yeah, I cannot defend this ridiculous gun. Rest easy, you brave little vooper. 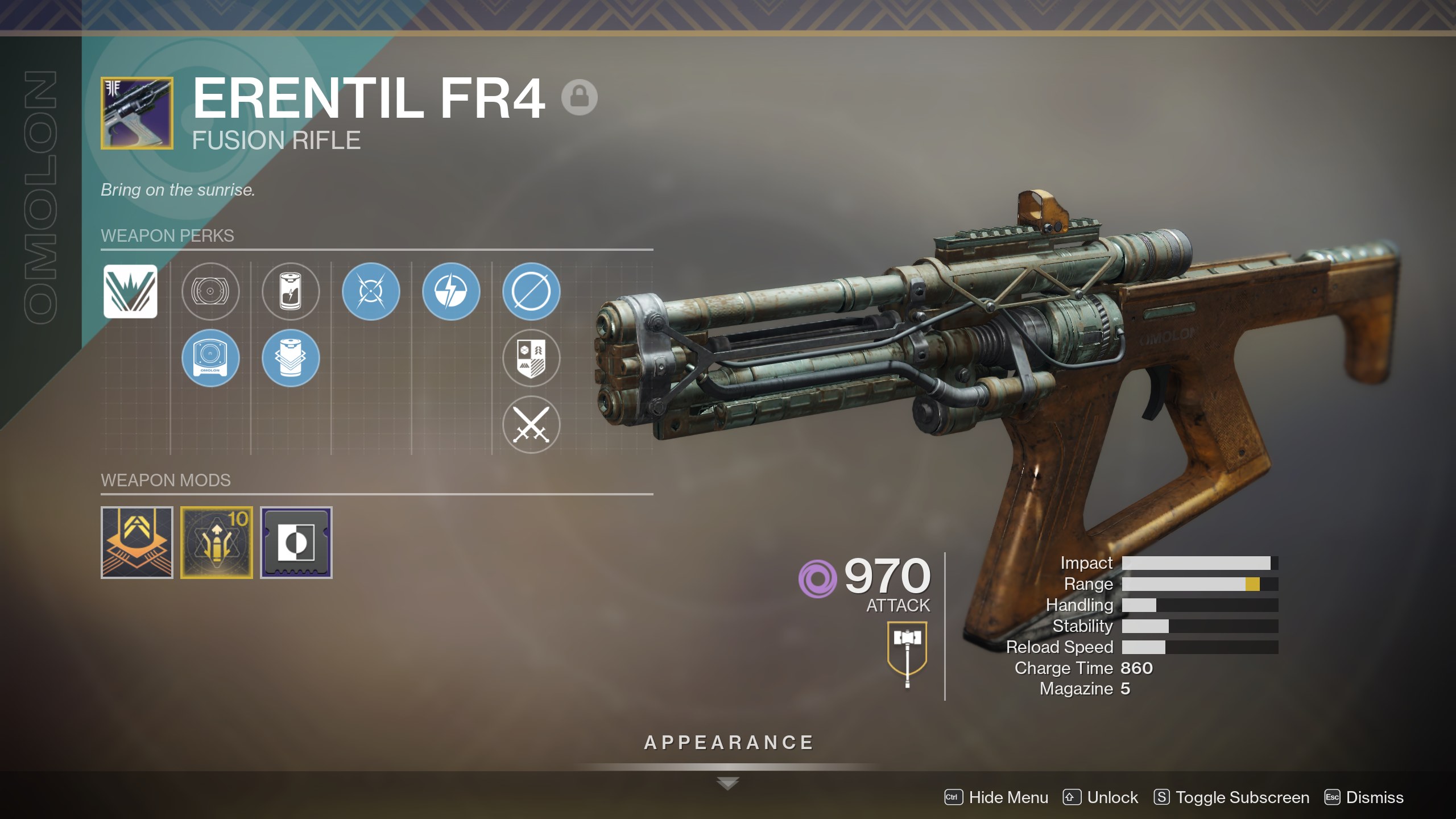 Sniper rifles will lose the 20% PvE damage boost against big baddies that they had received with Shadowkeep. Adaptive frames will deal less headshot damage too, and Rapid-Fire frames lose 10 base damage. Both PvE and PvP nerfs here. "Sniper Rifles have a lot of utility and safety due to their range and the increased damage was giving them too much of a leg-up on their closer range counterparts," Bungie say. "That gulf only widens as the difficulty of any given encounter goes up." Aggressive sniper frames come off fairly well in this, so maybe I'll use my Trophy Hunter with Triple Tap and Vorpal Weapon more next season.

In the realm of grenade launchers, Aggressive frames are becoming Raid-Fire frames with less damage but increased reserves. GLs which use Power ammo will deal 10% less damage to Major enemies and bosses too. I guess with the sniper rifle nerfs, they don't want everyone going right back to Spike Grenade spam.

With non-slug shotguns, Bungie are fixing a similar issue to the fusion sprays, where "at certain distances between players, the aim assist system would prioritise the head, causing the entire spread to deviate from centre mass and make the player miss out on the kill." Then with that fixed, they're nerfing them a bit "to give other weapons a little more time to react to them." I'll have to dig my slug shotguns back out.

Bungie mention multiple times that they're not thrilled with high-end PvE being so reliant on long-range weapons. Buddy, that's because I don't want to get stomped to death or kicked into walls so hard that I burst. You can't nerf snipers and strip more range off shotguns and fusions without fixing enemy melee moves, especially in the most punishing PvE modes.

More balance changes are coming for Exotic armours and Super abilities, and Bungie say they'll gab more about those soon. A few other weapon tweaks are planned too. I'd really hoped to hear a mild reversal of Shadowkeep's hand cannon range nerfs. And do remember that seasonal armour mods won't just be limited to new armour, which is nice.

At this point, I don't have a clear image of the new meta. It doesn't sound like it'll be hugely different but I am curious to see how it'll shake out. Will Aggressive frame snipers take over? Will slug shotguns be a cool new Crucible choice? Are we DPSing bosses with Firing Line linear fusion rifles? Will the auto rifles I've been stockpiling for ages be worth using? Dunno! But I'm up for a meta shift. I don't want the game to stay the same forever. I know I'll miss certain things but I hope others will make up for it.

Oh! One detail of next season they do confirm is that a Grandmaster difficult level is coming to Nightfalls. Alright.

Destiny 2's Season Of Dawn will run until March 10th, then the yet-unnamed new season (leaks suggest it's Season Of The Worthy) will begin. Before then, do cash in your Fractaline. This week also saw Bungie slip in a wee new cutscene with Osiris confronting the mighty AI, Rasputin. This could be a hint towards next season's plot or yet another strand Bungie toss out then won't return to for years.