With the possible exception of Janice, none of us wanted to go to Janice's birthday party. I knew what I was letting myself in for: an evening of her bunny-eyed enthusiasm, labouring under the delusion that I'd give a damn. Her company was only marginally more tolerable than that of my odious other (subordinate) colleagues. But rumours about Dino's opening night had been swirling for months, and I wasn't about to start turning down free meals.

At least Mark would be there.

Mark wasn't there. The bastard had apparently fallen ill, and sent some oaf we didn't know in his place. I trudged towards the restaurant with a sinking heart, bracing myself for an evening of asinine ass-kissing. If I'd known what to truly brace for, I'd have turned back that instant.

Some claimed Dino was hiding from the mafia. Others that he was the mafia. Either way, here he was, not-so secreted away on the edges of our little nowhere town. Right here, in fact, screaming with other-worldly rage while hurling boulders into a river.

The bistro was unusually open plan, and we could see right through to where the kitchen opened at the back. The chef seemed more interested in rearranging his garden than doing whatever prep you'd think necessary. The waitress pretended not to notice.

"My name's Summer, and I'll be looking after you this evening", she purred, guiding us towards the closest table to the screaming. "Don't worry, it's just a new oven", she said in response to our evident concern, before gliding away to greet some other customers. We were left to the doldrums of small talk, clinging to the promise that she'd return with drinks. I naturally absconded from the conversation, instead casting my eyes about the room.

Something was off. Something beyond the oddly ancient-looking walls, contending with my festering suspicion that the building hadn't been here last week. I forgot all about that, though, when I found the runes. 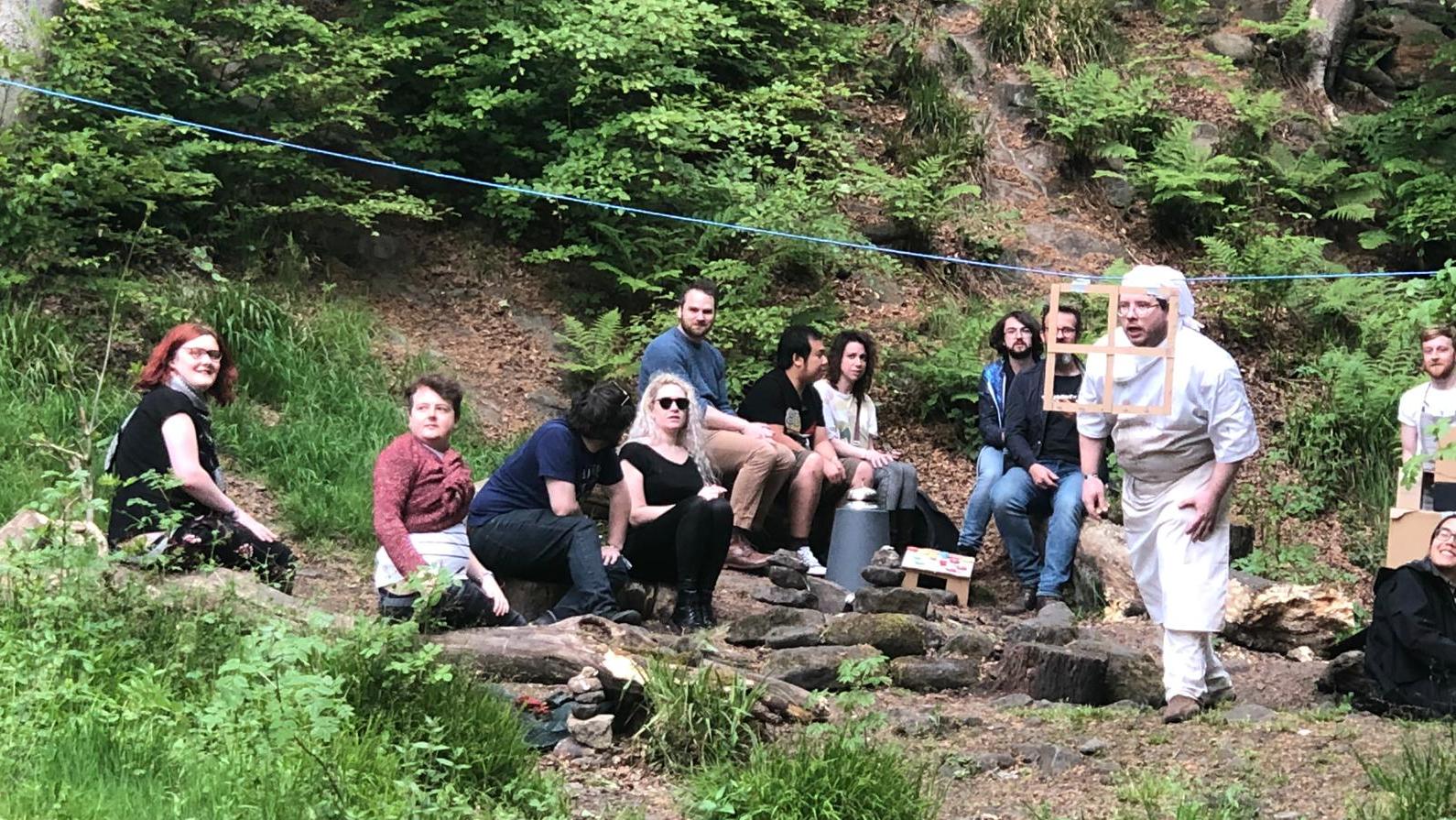 They were scrawled on a wine bottle, seemingly more dust than glass. The bottle had rolled against my feet, miraculously untrampled by the crowds still making their way inside. I picked it up, peering at the foreign text as it swirled into some semblance of legibility. I saw a 'B'. Then an 'O'. A 'Y'? An 'S'? I turned to the group, bottle in hand - and found myself face to face with Dino.

"We don't serve alcohol here", he said, in a loud Italian-American accent. He was hovering over our table, inches from our startled flesh. My colleagues looked even more alarmed than I felt, presumably because they'd just been staring at the space where he'd appeared. He grabbed the bottle, tucked it under his apron, then scurried back towards the kitchen. We breathed out, only to see our waitress lay a gentle hand on Dino's shoulder. Didn't he want to do a speech? It was opening night, after all.

The man recoiled, then cleared his throat.

"So uh, thanks for coming to my new restaurant. My first restaurant." His eyes darted around the room. "You might have heard... well I don't know what you might have heard, but it doesn't matter. We'll be fine. Sorry about the oven." He glanced at Summer, as temperate as ever. She smiled, and he retreated. We were abandoned to ourselves once more.

It wouldn't last. Janice had her eyes on a jukebox. "Ooh, what's your favourite song?" she squealed. I sighed, but welcomed the few minutes she'd inevitably spend fiddling with the thing. I could probably check Twitter.

"Put on... oh I don't know, put on some Thin Lizzy", I said, to the surprise of us all. I'd requested hackneyed tripe, the words somehow aloud before I'd thought them. But there was no going back. "Well go on then!", I snarled. She scuttled away, leaving me to avoid the group's collectively puzzled expression. This wasn't me, and they knew it. More worryingly, I knew it too.

My embarrassment was wiped away by the first note. Or rather, by the unmistakable horror that had appeared on the faces of our hosts.

Summer dashed towards the jukebox. Too late. She went into seizure, collapsing mid lunge, writhing on the floor. Dino abandoned her, instead rushing to the window. He recoiled once again, then sank his head into his hands.

They were. Four figures had begun making their way up the path, whether the path wanted them to or not. Their jackets seemed to chafe against the air, studded boots not quite making contact with the floor. They strode towards us, shoving and shouting, each step hastening the night's descent. Then they were inside. 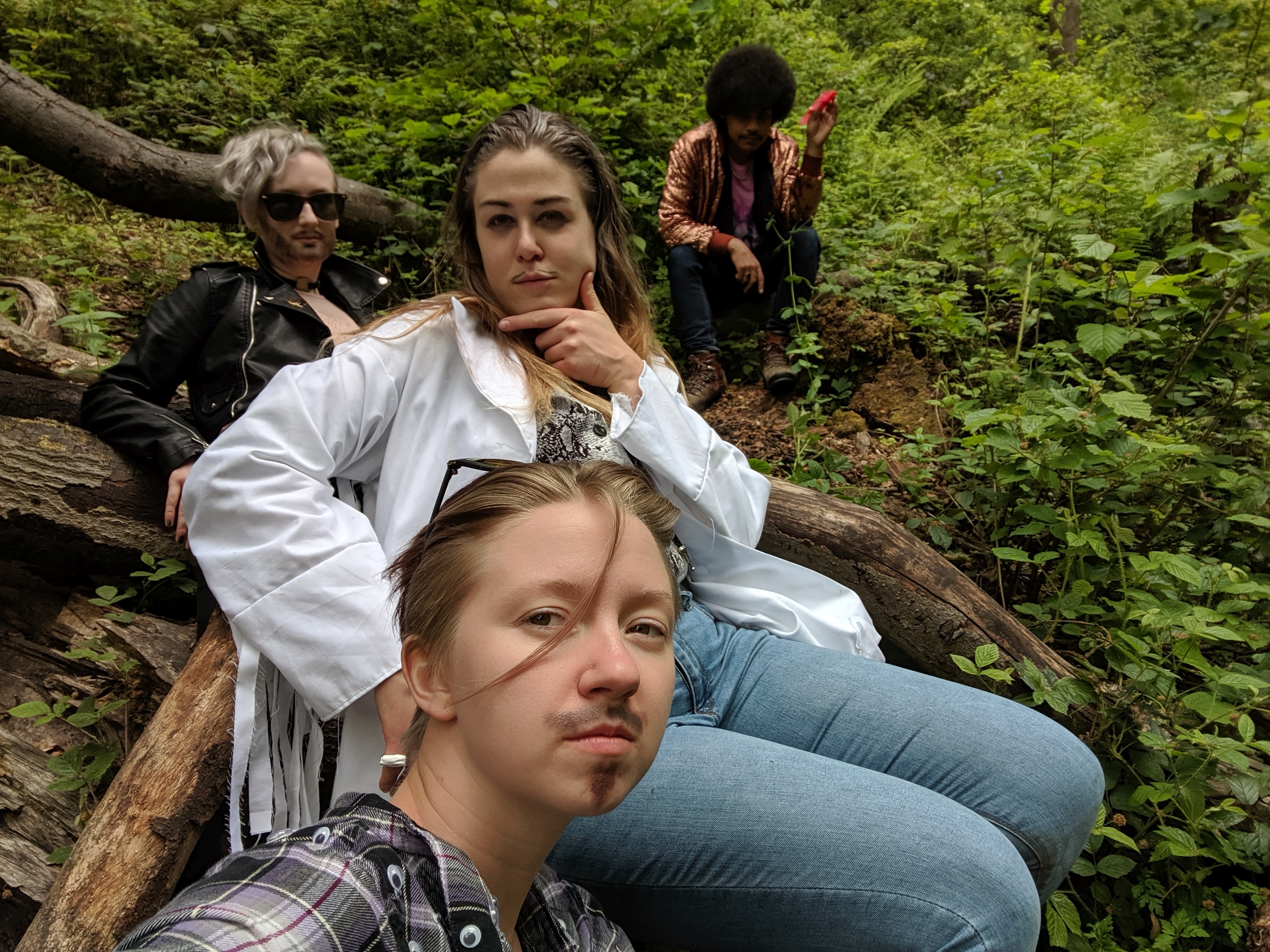 The room shook, unprepared. Cacophony swept us off our feet, and Summer back on to hers. She nodded, once, as she saw the boys, then smiled. Ever the hostess.

Not that the boys noticed. They swarmed around Dino, clapping him on the back with a ferocity that should have snapped his spine.

"Thought you'd seen the last of us, eh Dino?" one of them jeered, digging his elbow into the poor chef's side. "You should know by now we'll always come", said another, as he rooted behind the bar. "Diiiiino, come on pal, where's the booze?"

"No... no alcohol", Dino wheezed, attempting to extract himself from the arms piled around his shoulders. Reality and the boys ignored him, roaring in triumph as the one behind the bar started lobbing bottles towards his companions - then the room in general. I caught one, seconds before it could smash into my face. The same bottle as before, now sparkling clean.

The next few minutes blurred together. Tables were upturned, glasses raised, emptied, raised again. One of the Boys lurched towards us, lit cigarette in hand, and slung his arm around me. "You're a fine chap. A fiiiine chap. Not like Dino here." He wobbled as he slurred, and the motion caused something around his neck to knock against me. It was a model of a padlock - no, an actual padlock. The man noticed my noticing, winking as he tucked the lock back beneath his shirt.

"We go way back, you know? We all do," he said, pretending nothing had happened. "But now he doesn't want anything to do with us! Can you believe that?" He released me, throwing up his hands in disgust. We shook our heads in quiet agreement, hoping he'd move on. He did not.

"Course, she's the real reason we're here", he spat. "You know we'd leave like that", he continued, snapping his fingers and blowing out the light bulb above us, "if only she'd set us free." We followed his eye-line - to our waitress. And then to the keys around her neck. 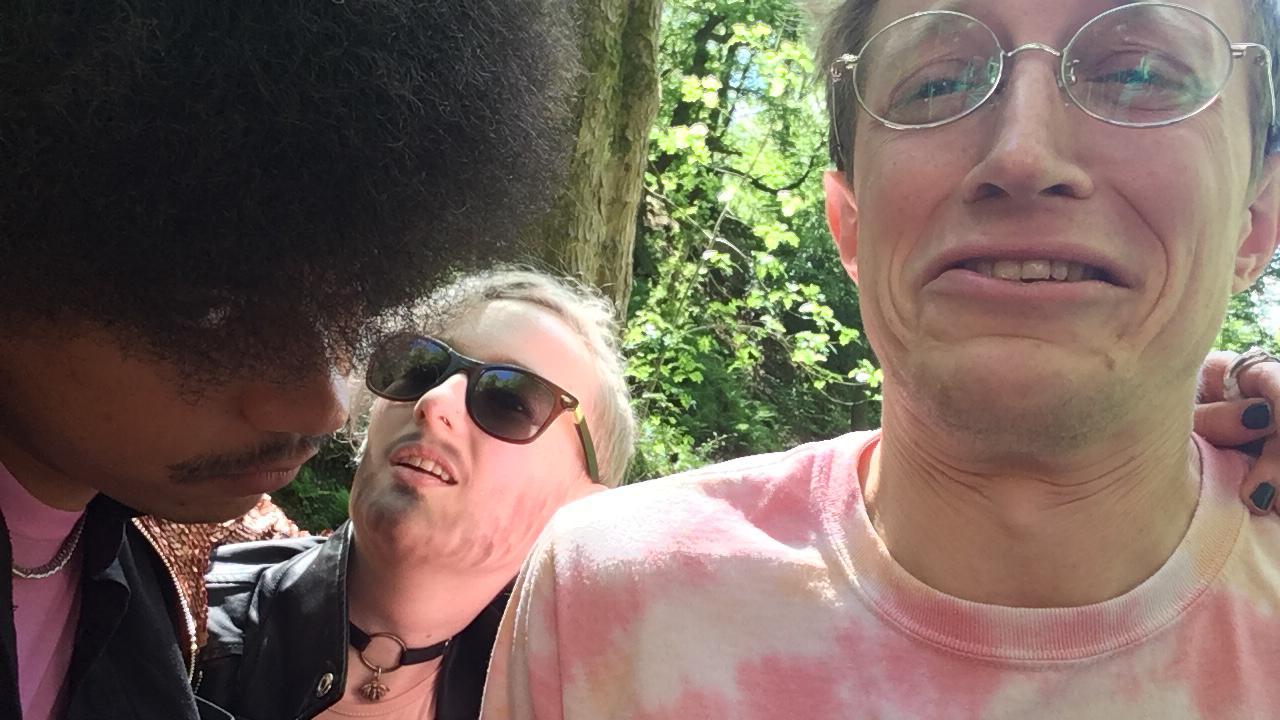 The boy grinned, then took off in a swirl of leather and stale tobacco. He sat down at the table next to us, arm already around another victim. The rest of our group stammered back into conversation, but me and the oaf whose name I'd never learn were already in motion. By unspoken agreement, I took the lead.

I tapped our waitress on the shoulder, smiling with as much warmth as I could muster. I told her about how much we'd enjoyed our evening. (The oaf slipped past my periphery.) How grateful we were for her hospitality. (He was behind her.) How desperately we wanted to go home. (His fingers found the knot.)

He pulled. Nothing happened. Our shared delusion that one tug would undo the necklace, along with whatever force keeping our tormentors here, was in ruins. "Oh, come now," She said, "Do you really want Summer to end?"

But something had happened. The boys were calming down, mollified by the civilising influence of the other customers. I watched as Janice prised the cigarettes off the boy who'd accosted me, laid them beside her, and softly explained UK smoking regulations. Elsewhere, another would-be diner had managed to plat a boy's hair. Yet another drank from a cup, pinky extended in tribute to proper decorum.

Then they left, each apparently of their own accord. I watched, dumbstruck, as they walked up to Dino, clasped him on the shoulder, then disappeared into the night.

The boys had gone back to town. 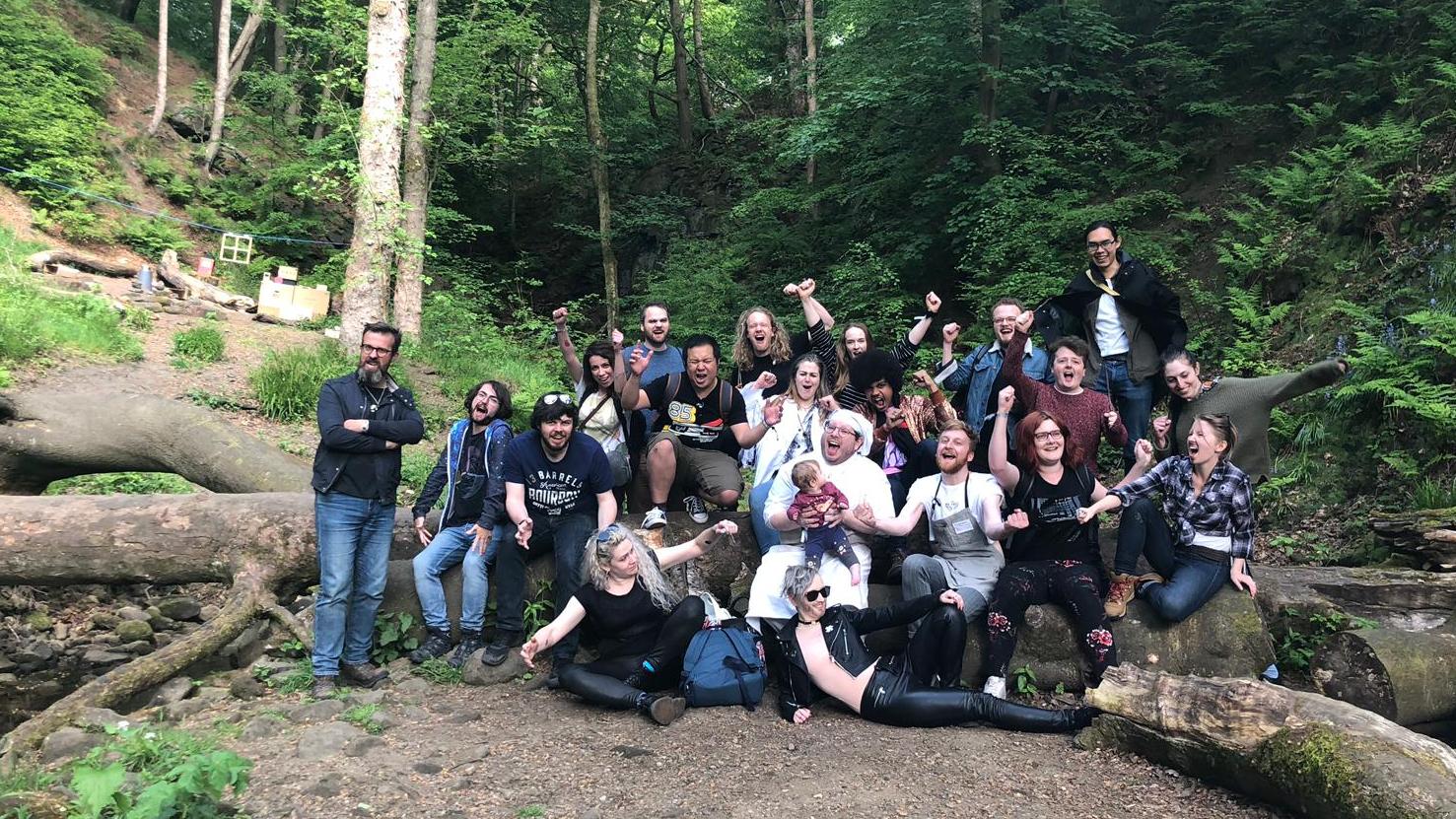 Many thanks to Adam Dixon, Beck Michalak, Thryn Henderson - and Nate Crowley - for designing a LARP so good I wrote fan fiction about it. Thanks also to Elizabeth Simoens and Jonathan Prior for their starring roles, and Sofia Romualdo for helping with the set. Photo Credits: Adam Fleetwood for the header, Ashleigh Timmins for the second and last photos, the boys for their selfie and the startled man for his - whose permission has been passed on to me without his name.

Thanks also to Lead Enabler David Hayward (and the rest of the team) for organising Feral Vector, which you can read more about here.