If you click on a link and make a purchase we may receive a small commission. Read our editorial policy.
Premature Evaluation is the weekly column in which Steve Hogarty explores the wilds of early access. This week, he returns to the simulated killing fields of Totally Accurate Battle Simulator.

When I was seven years old, my dad broke our Atari ST. We had been playing about with some primitive CAD software, plotting out simple shapes to render low polygon urns when he fell eerily silent. His face slackened, transfixed. His eyes became locked to the screen. Clicking over and over, the man began adding vertices anywhere they would fit, hundreds of them, tracing the outline of some impossible, non-Euclidean solid. With each fresh click the Atari took longer to respond, until at last the monitor was a nonsense web of overlapping edges and clipped geometry. “Dad,” I pleaded, the maddening nest of garbled lines reflected in his glasses. “Dad, don’t.”

But he was as unresponsive as the Atari itself, possessed by some unseen force, sliding the mouse to the render button and clicking a single, inevitable click. The 3.5” floppy disk drive let out a pained, mechanical shriek and the operating system bombed, the system’s guts irreparably confounded by my inscrutable father’s failed attempt to conjure a ten-dimensional, Lovecraftian artefact on something as powerful as a calculator. Dad stood up from his chair, said nothing, and walked out of the room. The Atari ST never worked again, precipitating a fraught relationship with my father that would take two decades to begin to repair.

Last week, while stress-testing Totally Accurate Battle Simulator, I made so many ninjas fight one another that my PC juddered to a halt, overheated and blue screened, engendering more empathy and forgiveness for my father in two seconds than a decade of family therapy could ever hope to achieve. The slapstick scrapping sim has been in early access for almost a year now, and since its launch the developers have been piling more and more ridiculous unit types into the game’s silly, wonky, physics-powered combat sandbox.

There are now pirate queens and pumpkin catapults, skeleton warriors, lance-wielding jousters and medieval archers who fire snakes instead of arrows. Want to see who’d win in a fight between Zeus and fifty guys armed with harpoons? Well now you can. Want the insides of your machine to fizzle as your tortured CPU attempts to simulate the individual limbs of eight hundred halflings piling on to a single velociraptor? Check you’ve renewed your fire insurance and go for it.

Though the roster of fighters has ballooned in the months since launch, the idea remains gratifyingly straightforward. You’re shown a top-down view of a battlefield, where an enemy army patiently awaits. Using a limited budget, you must compose your own army capable of defeating your opponent using a mixture of strategic positioning, raw numbers and luck. Some units, like the bird-flinging scarecrow or the Viking longship, are prohibitively expensive, limiting you to one or two per army. Others, like skeleton warriors, are cheap enough to spam entire legions of them. Victory usually depends on trial and error, breaking enemy formations with hard-hitters and then overwhelming them with little guys.

Once you’ve laid out your army, you press the big go button and stand back as the battlefield lurches into life, your loyal troops marching into battle like they’ve just woken up from general anesthesia and don’t remember what legs are. TABS looks absolutely stupid, about as realistic a depiction of battle as a couple of marionettes tumbling around inside a washing machine, but underneath the bonnet there’s a frankly incredible physics simulation taking place, way beyond anything the likes of the cowardly Total War has dared to attempt.

Slow fights down by holding the left mouse button and you can really savour the technical detail – and begin to appreciate why armies of more than a few hundred units can make a dusty GPU start to wheeze. Swarms of projectiles trace elegant arcs across the battlefield, landing with a satisfying thud in wooden shields where they wobble with perfect accuracy. Soldiers’ desperately flailing legs clamber believably over piles of ragdoll corpses. Sword tips connect with torsos and send fighters tumbling arseways. There’s a new Da Vinci tank unit – a kind of merry-go-round armed with a ring of cannons – which if you zoom right into it, reveals there’s a tiny Da Vinci hurtling around inside. What a treat.

Your googly-eyed fighters are far from plausible humans, but they have an undeniable spark of life about them. When a mammoth gets his tusks lodged in an archway, you can’t help but feel a pang of pity for those poor, panicking lines of code, desperately trying to extricate themselves from the virtual masonry as angry, pitchfork-wielding farmers descend. Battles are short and snappy, and always end in a comical freeze frame that you can pan around at will, a beguiling three-dimensional tableau that encapsulates the cartoonish pointlessness of war better than anything else I’ve played.

TABS is still a physics sandbox first and foremost, more of a fun toy to fiddle with than a game to really chew on, but an expanded list of challenge levels helps to give the latest version of the game a fuller sense of shape and direction. Players can now upload their own challenge levels to a community workshop too, giving you an effectively endless configuration of enemy armies to fight against. The next update promises even more curation, allowing players to design their own units from scratch. 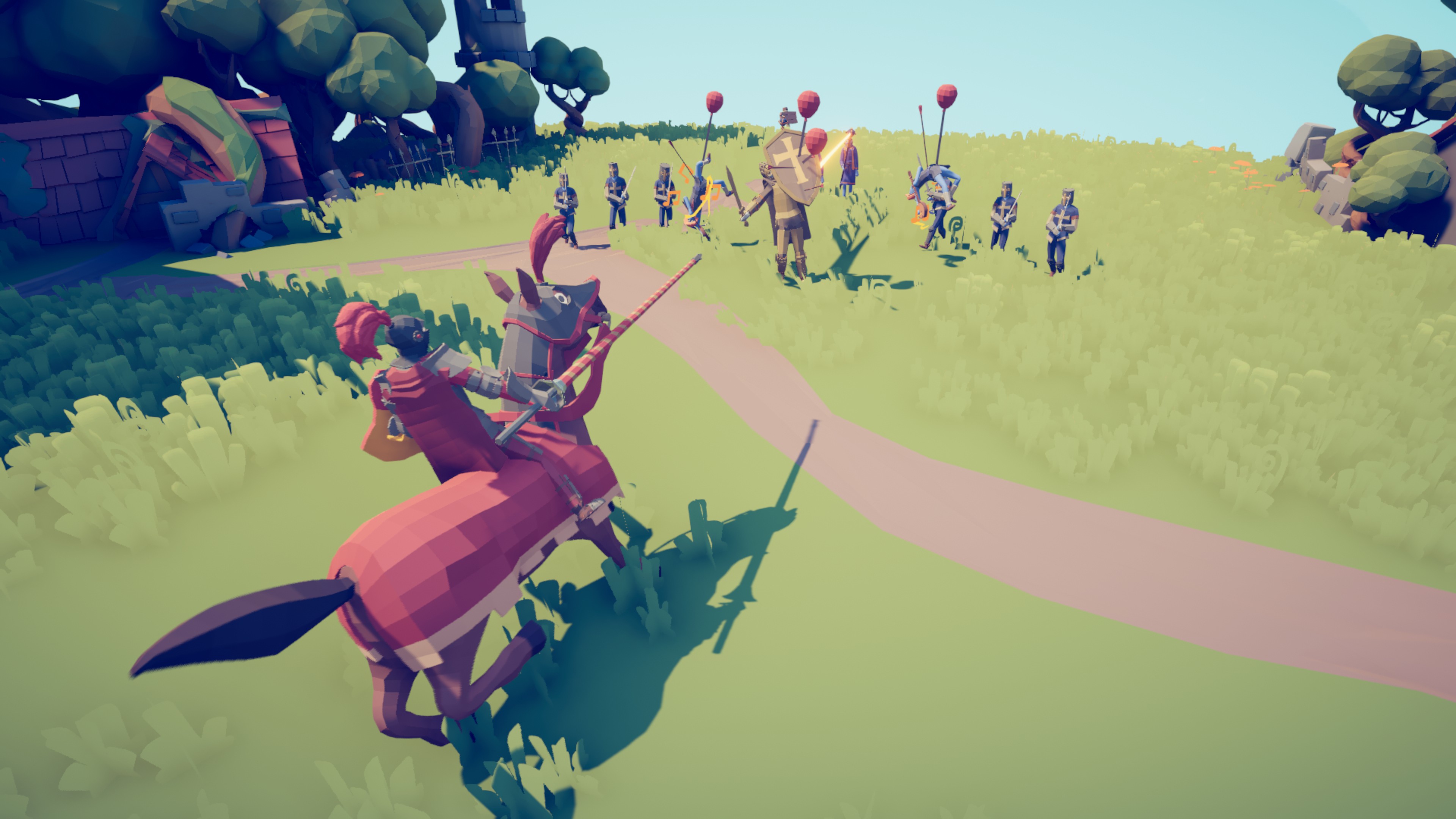 Since I last wrote about the game it’s gained a first-person mode, letting you possess a unit and march it around the battlefield. In some player-created challenges, taking direct control of a unit to override its tiny AI impulses is essential to victory, but in regular battles the ability to clamber inside the brain of a Minotaur offers an amuse bouche of control in an otherwise entirely hands-off meal.

But it’s far more entertaining to stand back and spectate. Totally Accurate Battle Simulator is all about goofy chaos, and wrestling control from the engine in an attempt to bring some order to proceedings feels contrary to the turbulent, beautiful, senseless spirit of the thing.