An arrow is flying at my face, but it's more of an opportunity than a problem. I swat it out the air, dash forward, and crush the skeletal archer with one swift counterstrike. His mummy friend comes leaping at me, scythes flailing, but I'm already dodging to the side, charging up a heavy attack and bringing my spear down on the space I just occupied. The mummy unravels as I turn to the last skeleton, and kick him into an abyss.

Fighting in Elderborn is splendid. It's mostly because you're mobile.

I couldn't tell you much about the plot, except that there isn't much of one. You're a person with a sword and there are monsters. It's all edgy fantasy gruffness that boasts about being "metal AF", and reader, I am not metal AF. But I do enjoy hitting people with swords, and this is something Elderborn excels at.

Actually, don't use the sword. Wizz through the first thirty minutes as quickly as you can, because the starting weapon is a bit crap. It takes too long to attack out of a block, and doesn't do enough damage. It's so underwhelming that I almost bounced away, but I'm very glad I held out until I found the spear.

That's when fighting comes alive. You twirl it in front of you, clanging into slow-motion with each well-timed parry, poised for a devastating counterslash. Most enemies fall to a counter and a charged attack, which you can chain together in non-stop flourishes, nipping forwards, backwards, sideways in a constant swirl of decapitation. There's no stamina to slow you down, and the dash is on such a short cooldown that you barely notice it.

You might think that makes combat less considered, and you might be right. Battles are fought more with your fingers than your brain. It's closer to Quake than Dark Souls, a test of speed rather than cunning or patience.

I wouldn't call the monsters or the world imaginative. The starting caverns are full of skeletons and frog people, and once you reach the surface those are swapped for assassins and fire mages. It's classic fantasy fare. Functional, rather than fancy, but everything is still a pleasure to cut down. Assassins vanish then slash forward, leaping through the air, begging to be countered. The wizards chuck easily-deflected fireballs, which you can send whistling back right into their stupid faces. Everyone is the right kind of predictable, which is a quick way to make you feel powerful.

There are a handful of abilities, too, though they don't change much. You invest XP points in getting faster, stronger or tougher, and along the way you pick up the ability to tear the heads off fallen foes and chuck them at living ones. Enemies only need to fall a tiny distance and they're kaput, and knocking wizards off pillars with pilfered skulls is a rush. The whole game is. 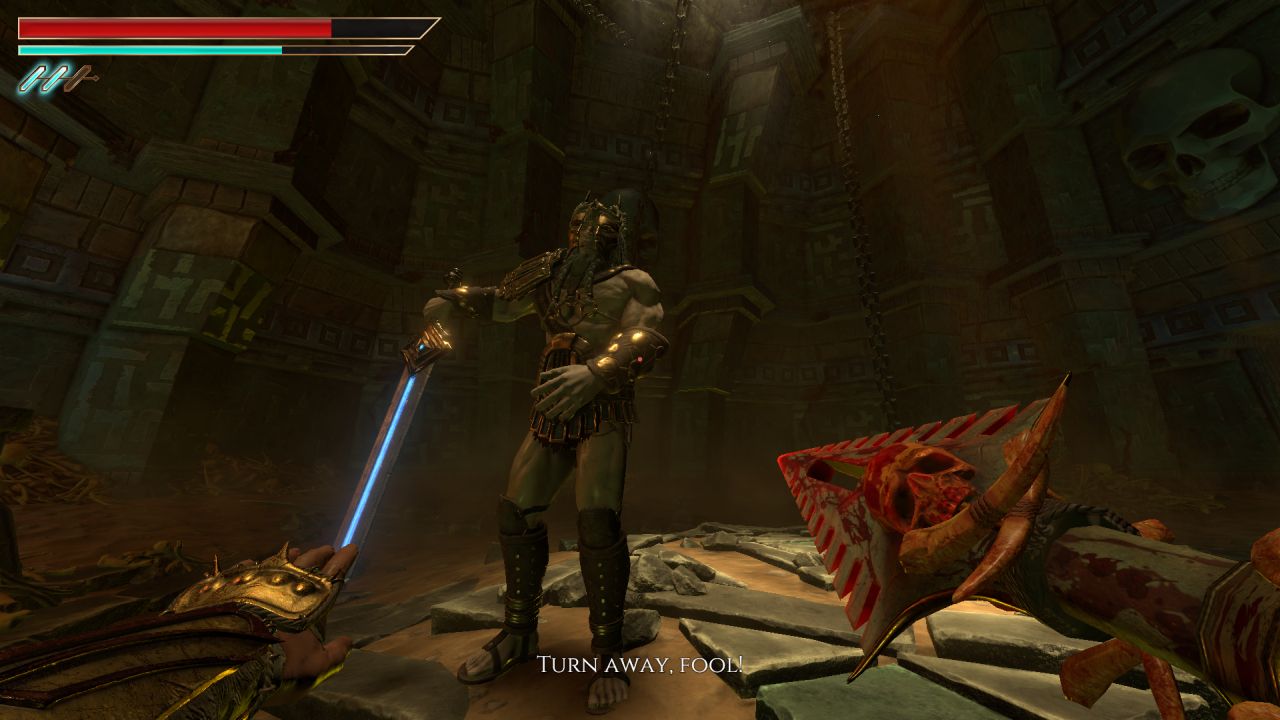 That's all I have to say about it, really. Top stabbing. Good kicking. More like this please.