Magalan - a planet that sounds like the name of an early 80s high street shop that would have rented you a telly - has been ravaged by some evil space goop or other, turning a once Earth-like civilisation into warring bands of Character Classes, addicted to Blue Space Goop and all very cross about something. ELEX is very definitely about something.

You play Jack Videogames, a man whose generic nature has caused him to rise to the very middle of obviousness, his peculiarly unruly right eyebrow a threat to the opposing forces on his homeworld. Abandoned by his Angry Goop Colleagues, he's shot, falls off a cliff, and is then stripped of his armour and weapons. For some reason he decides to get better, and get his revenge, or not, or something - the game really doesn't sweat the details.

It really doesn't sweat anything at all, for that matter, from animations to menus, explanations to dialogue, this all feels phoned in, then put on hold. Immediately giving the impression of something in very early access, this is apparently the finished goods, a game in which just moving the camera makes me feel as though I've got a heavy flu, before even trying to contemplate how Jack Videogames manages to do that slide-forward diagonal jump move when I try to climb a wall. The opening sequence, after a download of boilerplate scifi bilge more akin to an expository truck crashing and shedding its load, sees Jack (I decided his name had to be Jack before the game revealed his name was actually "Jacks") falling out of the sky and crashing onto the planet surface. Then getting shot.

He grunts inane drivel as he clumsily stumbles about, and your challenge is to not stop playing for as long as possible, to see if you can find out what the game's actually about. But the game isn't going to make that easy for you! To learn about your dreary goals, you'll need to access a sub menu that the game never thinks to introduce access to (it's Tab, then the sixth anonymous icon along). When you find it, you'll learn that you are intended to both "Survive" (as in, "play") and take part in a "Campaign of Vengeance", in which you're supposed to assume the entire backstory of this generic whitebread nothing-man whose former captain, a man I'm assured was called Kallax, ordered that he be killed.

I shall demonstrate how appallingly written every word of this game is by typing out Campaign of Vengeance's text in full, with my additions in [square brackets]:

"Kallax was waiting for me. Why else would he have been right there when I crashed? Someone tried to kill me. [Yes, it was Kallax.] And if they are prepared to go to those lengths then they won't stop until I am dead. [Generally people prepared to go to the lengths of killing someone won't limit themselves in these ways, yes.] It will be a long way through many adversities [how do you know?!], but I must find answers. I have to find my old strength if I am to stand a chance against Kallax."

By his old strength, he means prior to his addiction to ELEX, the Space Goop that gives the game its enigmatic title. There is a group of mercenaries or somesuch called the Albs, who are all infused with blue goop and as such gain super powers, but lose all their emotions. (Apart from anger, but no one seems to notice this.) In the time during which JV magically gets all better from being shot in the stomach, by having a lie down in some grass, he apparently escapes his addiction and is therefore about to experience emotions for the first time. 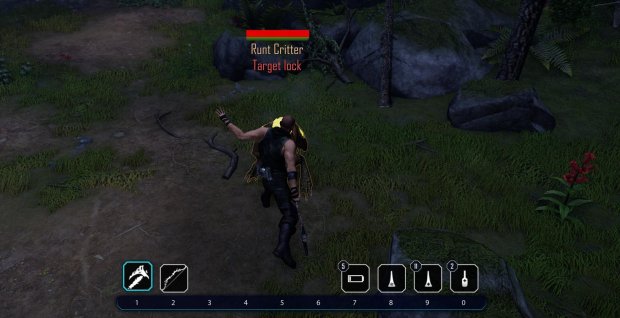 But! But by god it's funny. It's not meant to be funny, but it is. The first encounter you have in the game is with a chap who punches you full in the face for no reason, then helps you up and tells you off for attacking people unprovoked. This guy, with his peculiarly tiny head, then proceeds to talk nonsense at you in a voice that sounds like it should be explaining the medical side effects of a drug in a US commercial. He does this through the medium of a cutscene during which every shot is out of focus. And then he demands you say sorry! For what?! For falling off a cliff when he apparently stole your stuff, and then walking toward him a few days later. The choices are:

"I don't apologize for nothing, asshole."
"Prove you're not the thief, and I might trust you."

Well, 1) is definitely the more reasonable option given the peculiarity of the situation, but such grammar is never acceptable. 2) is more entertaining, since asking someone to prove they didn't steal something from you is quite the task. "Um - I'm NOT currently holding the item that was stolen?"

He apparently liked the second choice, congratulating me for not trusting him, and then wanted to be my best best friend. This game is so incredibly stupid.

I can't get past the cutscenes and conversations being out of focus. It's like they had a development team meeting and brainstormed new and inventive ways for the game to be bad.

"What if we make the menus a meaningless muddle of exclamation marked lists of items, where sometimes clicking clears the mark, sometimes assigns the item to a quick slot, but other times uses the item?!"

"That's great stuff, Dave, good work. But it's a bit Mass Effect: Andromeda. We need to be even more original."

"Hannah's been experimenting with something where the music volume gets louder and louder in each cutscene, until you can't hear what's being said?"

"The minimap could be a blank grey circle?"

It's beyond this first hour that the game opens up, lets you go off where you want, do what you want, and seemingly align with who you want. Barely any of it in focus. Perhaps here it will flourish. But for first impressions, this one's a doozy.