When I first clapped eyes on the new Endgame Gear XM1, I thought I'd accidentally picked up my trusty Logitech G Pro Wireless again. Aside from the obvious wire sticking out of the XM1, both gaming mice have smooth, lightweight shells that fill the palm and sit close to the ground, and both have two small black side buttons that feel nigh-on identical in shape and size under the thumb. They even weigh practically the same amount, too, with the XM1 coming in just a gram heavier than the Logitech's featherweight 69g. Is it worth considering as a cheaper, wired version of my best gaming mouse champion? Here's wot I think.

Now, the name Endgame Gear is probably unfamiliar to a lot of you, and with good reason - they're a fairly new hardware manufacturer and the XM1 is their very first gaming peripheral. Built with esportsers in mind, the XM1's big claim to fame is that it has a record-breaking switch response time of less than a millisecond, making it super fast for those all important headshots in competitive shooters and whatnot.

Admittedly, I have no way of measuring such a claim, but it definitely feels nice and responsive during everyday use, and the combination of its Omron switches and its 16,000 DPI Pixart PMW 3389 sensor make it a very precise and nippy gaming companion as well. However, I wouldn't say it necessarily felt faster than, say, other £54 / $60 mice I've tested recently, such as Corsair's Ironclaw RGB or Glorious' Model O-, for example, or that its "patented analogue switch contact algorithm" had a noticeable impact on the way I played. 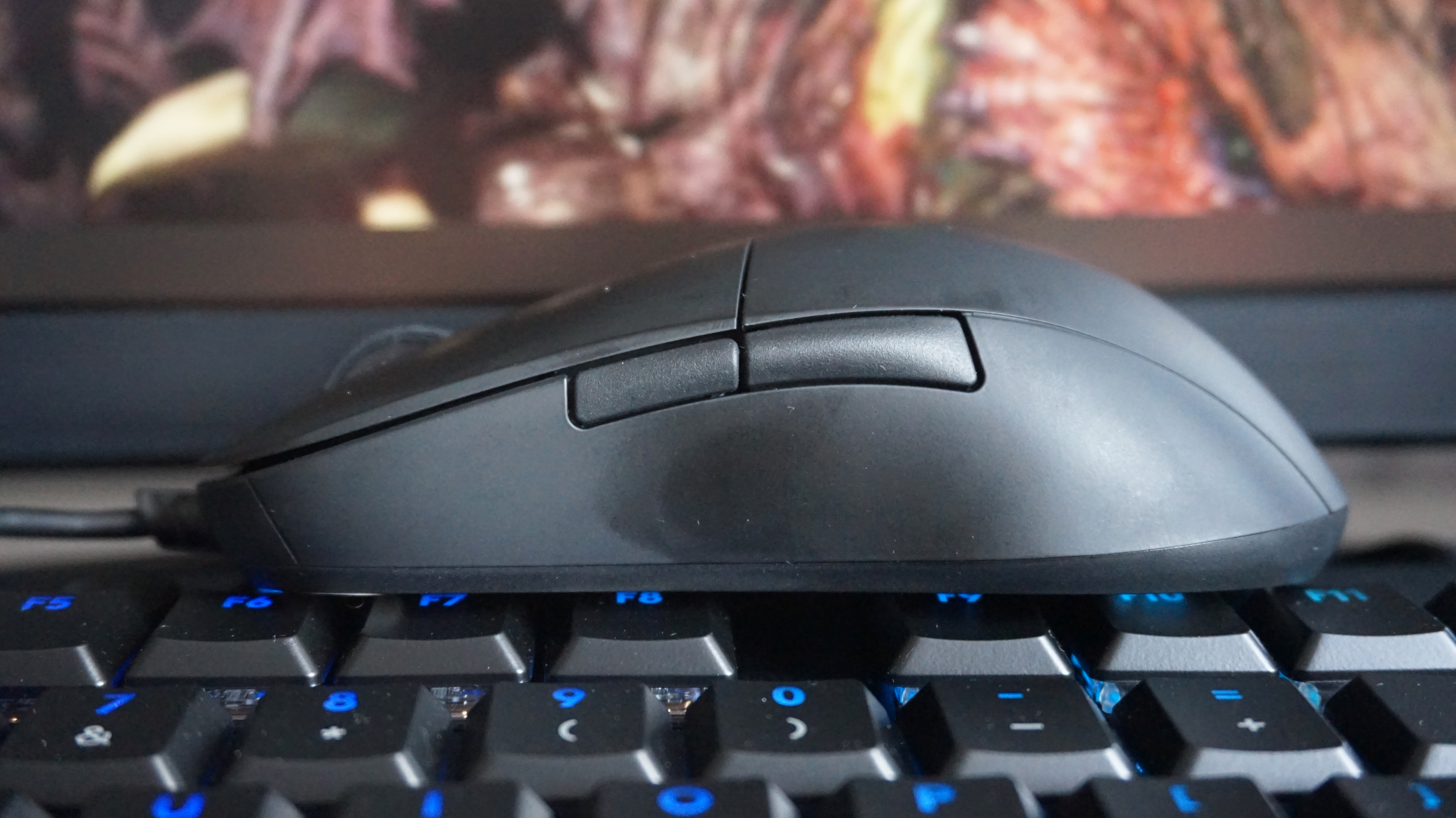 Indeed, the most noticeable thing about the XM1 was the sheer amount of noise its two main clickers made every time I pressed them down. It's a much deeper, more pronounced sound than other, higher-pitched mice I've tested over the last few months, and it not only feels a bit over the top when you're just clicking on links and browsing the web, but I also found it quite distracting when playing games, too - especially when you're furiously Super Shotgun-ing a demon in the face in Doom or carving up dinosaurs in Monster Hunter: World. It wasn't enough to get on my nerves, per se, nor did it make me want to switch mice completely. But it was definitely the thing I remember most about the XM1, and will likely become a point of contention for those who prefer their mice to be as quiet as possible.

I wasn't blown away by its overall build quality, either. Even after just a couple of weeks on my desk, there were noticeable grease marks where my fingers had been on the two main clickers, as well as on the side around its two side buttons. It wasn't easy to clean off, either, as you can see from the pictures in this review.

Its side buttons were, at least, easy to press for the most part, and I was able to quickly distinguish which one was which thanks to the small but obvious divide running through the middle of them. Sadly, the XM1 doesn't offer a huge amount of flexibility for using said side buttons, as you're pretty much limited to their default function of 'forwards' and 'backwards' for surfing the web, or disabling them entirely. That's all you get in Endgame Gear's XM1 Config Software tool, which was disappointing to say the least.

Thankfully, there's a little more leeway when it comes to adjusting the mouse's DPI or sensitivity settings, but even this isn't quite as versatile as I'd like. The good news is that you can choose from four different speeds all the way down from a dead-slow 50 DPI up to its maximum, insanely fast 16,000 DPI in increments of 50. The bad news is that the only way of changing DPI speed is to turn the mouse over and press a small button below the sensor. The two LED lights above it will then change colour depending on which profile you've selected, but that also requires remembering which colour corresponds to which speed in the XM1 Config Software, which isn't particularly easy when its green LED looks practically the same as its blue LED.

Overall, it makes for a pretty underwhelming mouse compared to its similarly priced competition, and at £54 / $60, it feels very expensive for the amount you can do with it. Indeed, there are much cheaper mice such as the Steelseries Rival 110 and HyperX Pulsefire Core that give you more customisation options than the XM1 for literally half the price, making it a tough sell as an out-and-out gaming mouse.

There will no doubt be some who find its lack of outward-facing LEDs and plain, featherweight chassis a more attractive proposition than other super light gaming mice such as Glorious' cheaper, but rainbow-infused £45 / $50 Model O-, or the more expensive £80 / $80 Razer Viper, but its lack of customisation options are a real sticking point as far as I'm concerned, and its loud, prominent clicking sound doesn't help things either. Instead, if you're adamant about getting a plain, lightweight gaming mouse, you'd be better off saving your pennies and going with something like the £48 / $55 Roccat Kone Pure Owl-Eye or the even cheaper £25 / $40 Asus TUF Gaming M5.