Ever since the beginning of 2018, the Steelseries Rival 110 has been my best gaming mouse recommendation for those on a budget. Available for just £25 / $23 these days, it's a tough act to beat for anyone looking to keep costs down to an absolute minimum. But now there's a new budget mouse in town looking to take that crown from the Rival 110: the HyperX Pulsefire Core. Does it have what it takes to dethrone its Steelseries rival? Here's wot I think.

As you'd probably expect from a £25 / $30 mouse, the HyperX Pulsefire Core is pretty straightforward. Its simple black chassis shares a similar symmetrical shape to HyperX's Pulsefire FPS mouse, but the presence of two side buttons on the left-hand side of the mouse shows this is still very much a right-handed mouse as opposed to being a full-blown ambidextrous one.

Still, provided you do fall into the right-handed category of mouse peeps, it's a good shape for resting your entire palm on, and I found it comfortable to use in a fingertip grip as well when I wanted to shift my hand further back a bit. It's lovely and light, too, weighing just 87g. This made it as easy to move around my mouse mat as the exquisite Logitech G Pro Wireless (which weighs a mere 80g), and if it weren't for the braided 1.8m cable sticking out the front I would probably have a hard time telling them apart if you put a blindfold on me.

The two side buttons were also within easy reach of my thumb most of the time, although the farthest one did require a bit of a stretch when I adopted that aforementioned fingertip grip. I suspect this will be less of a problem for those with larger hands than myself, or indeed those of you with fingers nimble and supple enough to use a claw grip for longer than 30 seconds at a time, but even if you do end up reaching for it a bit, the good news is that I rarely hit the wrong button thanks to the clear, distinct gap between each button. This made it very easy to feel where one button ended and the other one began, which is more than can be said for other, more expensive mice where they can often feel like one giant button when you're not paying close enough attention.

By default, the Pulsefire Core's two side buttons are set to forwards and backwards functions for surfing the web, but you can change these to whatever you like by downloading HyperX's NGenuity software. These include keyboard commands, other mouse functions, media controls, your own recordable macros, plus certain Windows functions such as switching apps, or copy and pasting, or opening specific programs, folders or website URLs.

You can also use them to change the speed of the mouse's DPI or sensitivity settings. The two buttons just below the scroll wheel are already set to scroll up and down through its four available DPI profiles (or five, if you enable it in NGenuity), but let's face it, these buttons are never very easy to hit in the middle of a game. Instead, it's usually much more efficient to move these to the side buttons - especially when you have the option to enable a DPI Clutch as well, which will change the mouse's DPI speed to whatever you for as long as you hold down the button, a bit like so-called DPI Sniper buttons you find on other gaming mice. This can come in handy when you're lining up shots in competitive shooters, for example, as it gives you a bit more control when you're aiming down your gun sights. 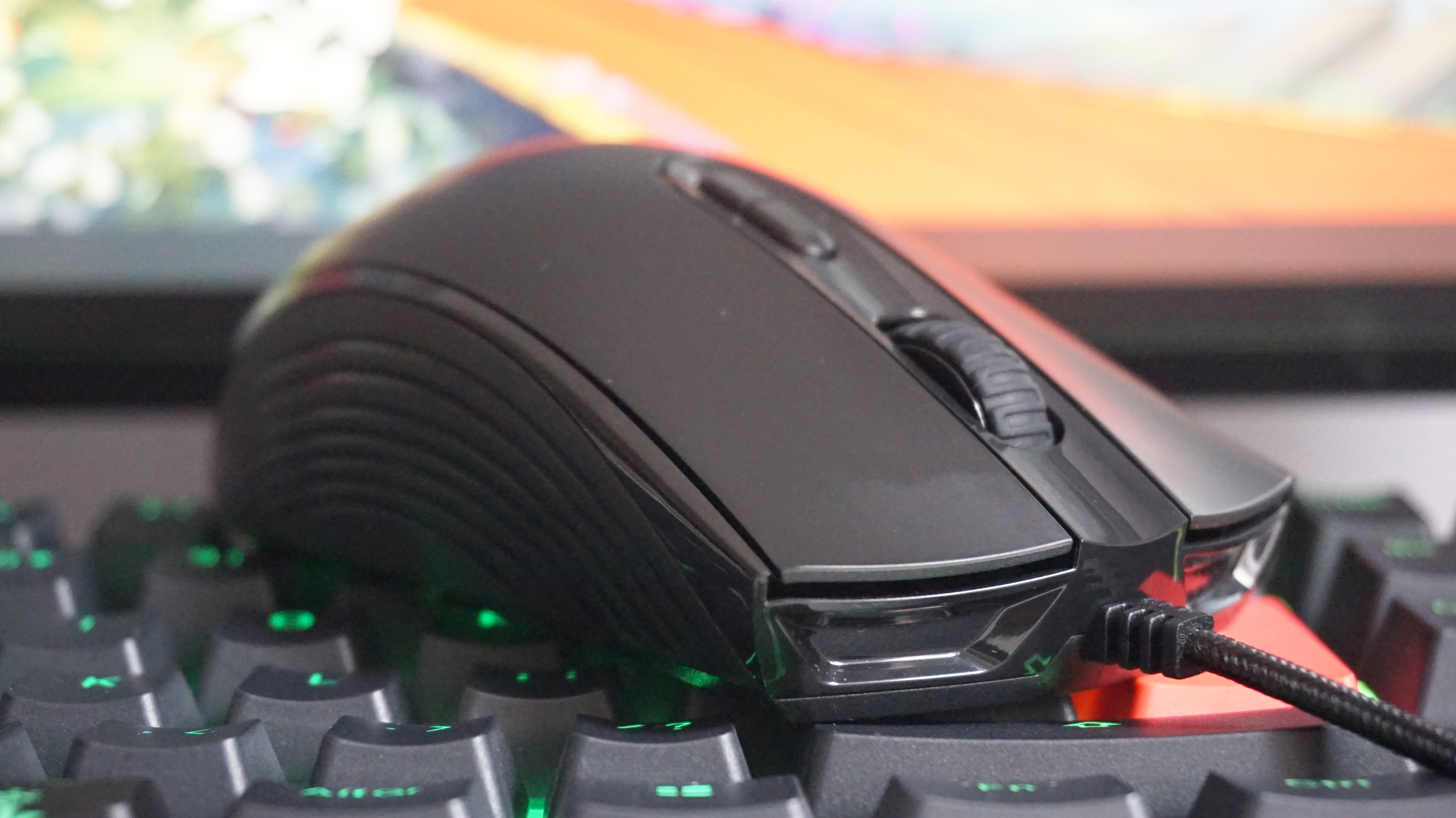 This isn't an option on the Steelseries Rival 110, which makes the HyperX Pulsefire Core much friendlier for budget conscious competitive types. The Rival 110 also limits you to switching between just two different DPI profile speeds, as opposed to the five you get on the Core.

Admittedly, the Pulsefire Core's DPI range only extends from 200-6200 DPI, whereas the Rival 110 maxes out at 7200 DPI, but to be honest, anything above 2000-odd DPI is too fast for my eyes to keep up with. You'd need bionic laser vision to make use of the Rival's extra 1000 DPI, but even then you're still limited in how you can use it due to its either-or profile options. The Pulsefire Core, on the other hand, is a lot more flexible.

The only minor concern I have is how well its plastic chassis is going to wear over time. Unlike the slightly more expensive £34 / $40 Asus TUF Gaming M5, for example, the Pulsefire Core doesn't have any kind of sweat or friction resistant coating to give it extra durability, and I noticed my hand often left small sweat patches on it even after fairly short gaming sessions with it. 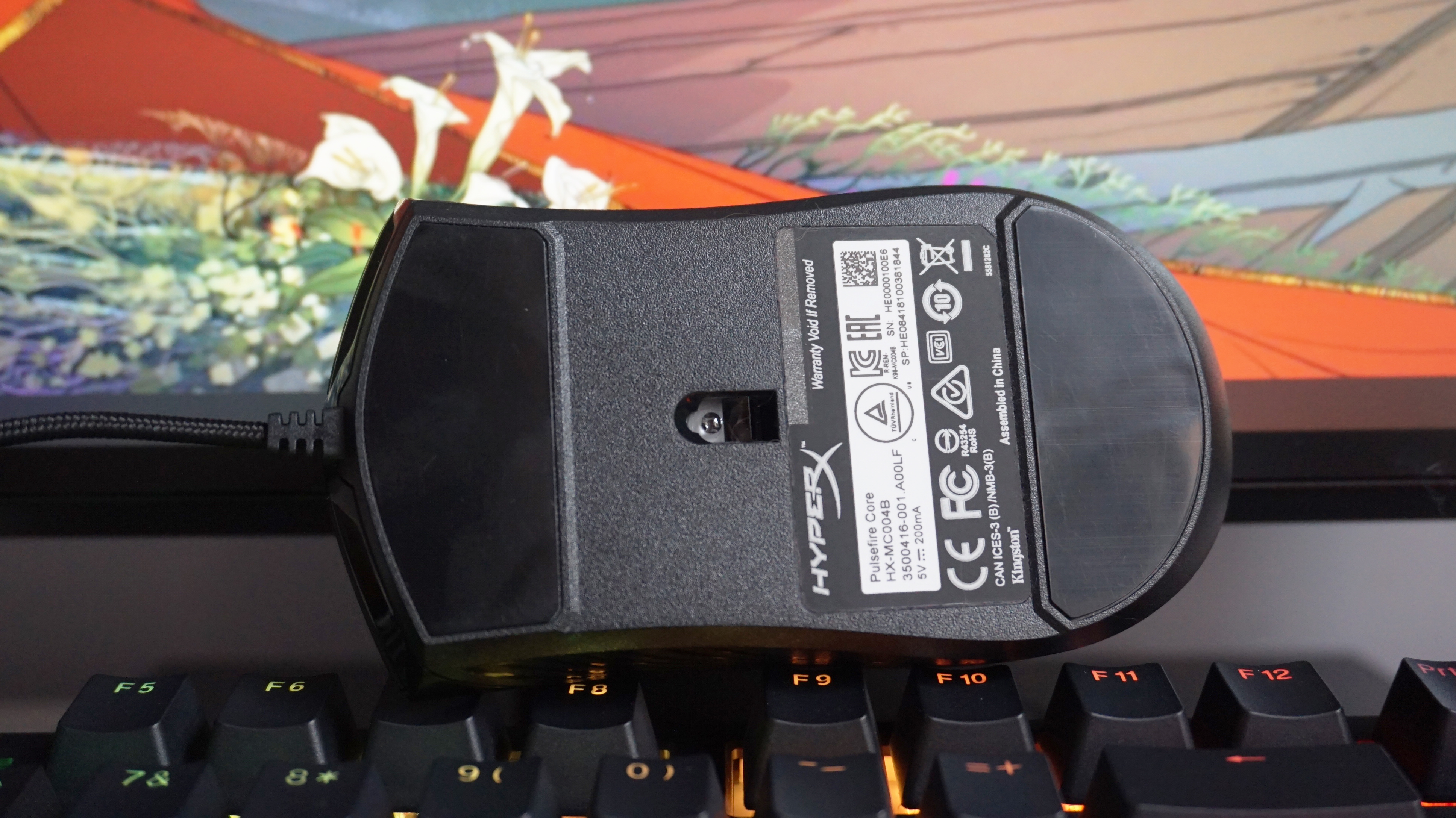 Similarly, it's only been a few weeks since I started using the Pulsefire Core, but I'm already starting to see marks where my hand's been touching it the most, and I wouldn't be surprised if it started looking a bit old and tired in a couple of months time. In a way, that's somewhat to be expected on such an entry-level mouse, but it wasn't a concern I had with either the Rival 110 or the TUF Gaming M5. It's also worth pointing out that its right and left clicker buttons are also only guaranteed for 20 million clicks, as opposed to the 30 million clicks you get on the Rival, or even the 50 million clicks you get with the TUF Gaming M5.

Still, when the TUF Gaming M5 also lacks a DPI clutch / sniper function, it ultimately comes down to whether you prefer a mouse that's hard-wearing, or one that gives you oodles more flexibility. Personally, I think the HyperX Pulsefire Core is better value for money than the Steelseries Rival 110, as you can just do so much more with it for exactly the same amount of money. I also preferred the Core's overall shape to the TUF Gaming M5, the latter of which I found a bit small and petite for my liking. As such, I'm going to give it a cautious and tentative thumbs up.

I mean, at this end of the price spectrum I'd strongly urge you to spend just a teensy bit more on either the £35 / $40 Steelseries Rival 310 (or Sensei 310 if you're a leftie), or the even better £45 / $40 Corsair Ironclaw RGB if you're in need of a new mouse, as both of these offer even more flexibility plus superior build quality. Still, if you're £25 / $30 is your absolute limit and you don't mind something that's cheap and cheerful, the HyperX Pulsefire Core is well worth a look.