"The factory must grow." It's a mantra that all Factorio players know - or at least they should. But it's one thing knowing it, and quite another to put it into action. The truth is that it can be tricky for new players to know just how to grow their factory from nothing into an energy-guzzling, environment-poisoning behemoth of efficiency and automation.

Our Factorio guide for 1.0 hopes to solve this problem for new players, as we delve into our top 15 Factorio tips covering everything from quality of life improvements to building strategies, and much more.

Factorio is an enormous game with lots to learn before you can create a colossal factory, but there are lots of little tips and techniques you can employ to help speed up your progress and get you started on the right foot.

Here are our 15 top tips for Factorio players who are just starting their first factory: 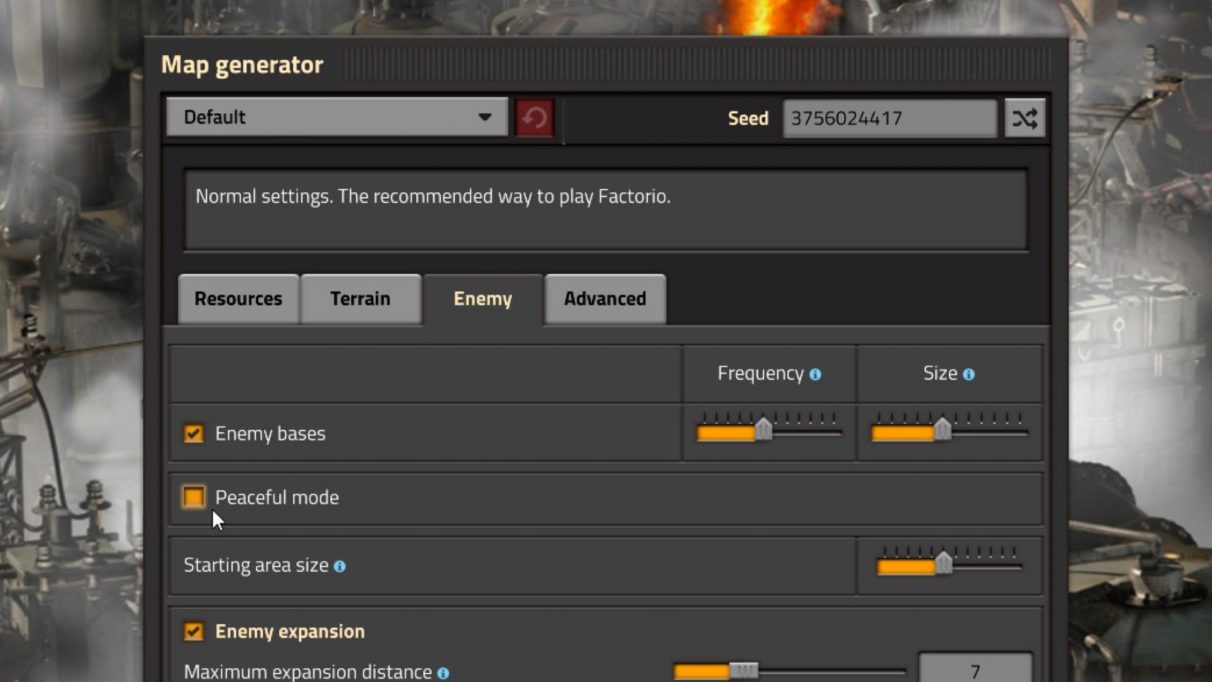 Tip #1: Set to Peaceful Mode for an easier start

While you might be the only human on the entire planet in Factorio, you certainly aren't the only living thing. Indigenous creatures called Biters will start to attack you as your factory grows and starts to pollute their home - and they can make life pretty difficult for you, particularly in the early game before you have proper defences set up.

If you're just starting with Factorio, we'd recommend you set your first world to Peaceful Mode in the game options. This means that Biters won't attack you until you attack them for the first time. This gives you lots more breathing room to expand your factory and get set up with some basic weaponry and defences before you go and pick a fight with the nearest Biter nest.

Another good option to set before you've even started your first game is to head into the Advanced tab of your game setup and set your Research Queue to be always available. For some reason, by default you will only be able to queue up research once you've finished the game (by launching your first rocket) - but that just seems strange to me. Why not have this nice little quality of life feature from the very beginning, so that you can queue up all your desired technologies in the research tree ahead of time instead of having to hop back into the research screen every time you finish your latest technology?

Tip #3: Plan your goals out ahead of time

Factorio is an incredibly open-ended game, and there is very little hand-holding. So, it's up to you to set your own goals.

Your end-goal is to build and launch a rocket, but that is far too large a project to tackle in a single step. What we're talking about when we say "goals" is the next tiny step you can take to develop your factory, preferably something you can complete in the next twenty minutes or perhaps the current play session.

If you need some help figuring out what your initial goals should be at the start of a game of Factorio, you should absolutely check out our Factorio early game walkthrough guide!

Tip #4: Don't be afraid to spread things out

A key mistake that new Factorio players make when they start their first factory is that they don't spread things out enough. Factorio worlds are staggeringly large, and you always have more than enough room to space out smelting modules from mining patches, and leave plenty of room for belts and later improvements to your factory.

Problems arise if you build your factory too compact: often, you'll find yourself having to deconstruct far more than necessary in order to make a simple change to one part of your factory. So don't be afraid to spread things out. 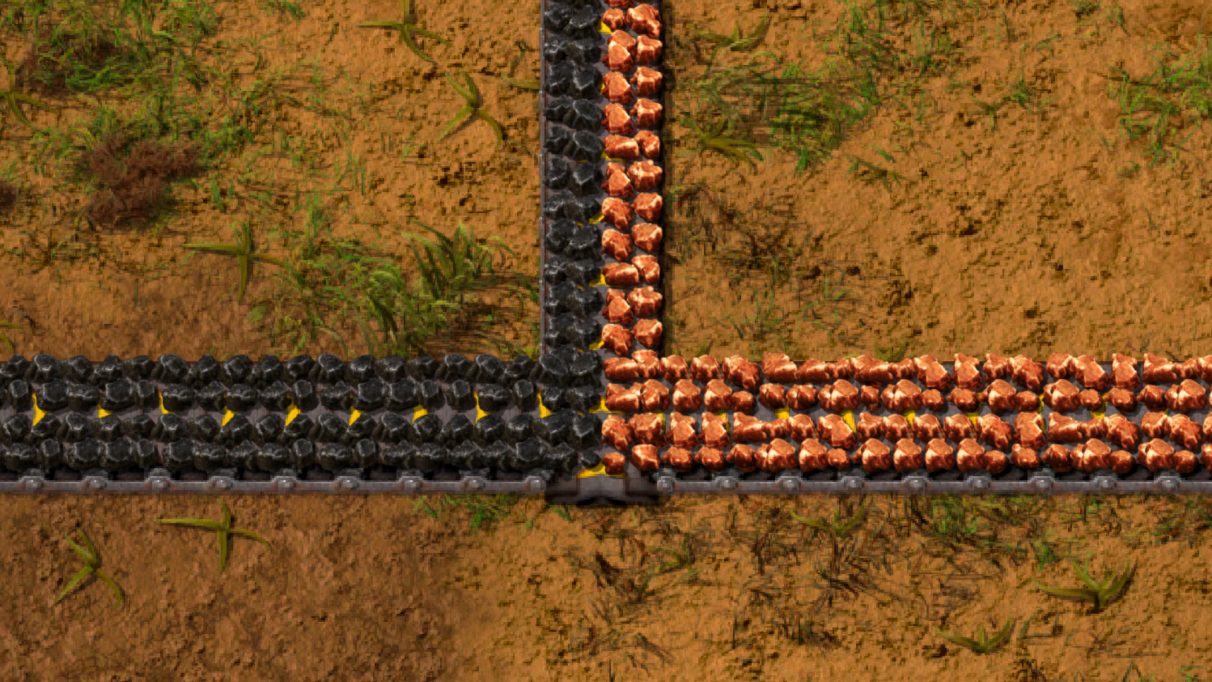 Tip #5: Use both sides of your belts

Belts are wonderful things in Factorio. They are unbelievably versatile, and you can use them to do almost anything you want when it comes to shipping exact quantities of resources in exact orders to exact positions.

But for now, let's just start with one powerful lesson about belts which beginners may not have realised: you can use each side of a belt to carry different types of resources. For example, if you want to get an iron smelting module up and running, you can feed it with a single belt carrying iron ore on the left and coal on the right, rather than having to use two separate belts for each resource.

Tip #6: Know the most useful ratios

In order to make the most efficient factories possible and be perpetually free of resource bottlenecks, you'll need to commit at least a couple of handy Factorio ratios to memory. I'll list a few below:

If none of that makes sense to you yet, don't worry. It's here for when it becomes applicable to you and your factory. For more handy ratios I'd recommend you take a look at the Factorio Cheat Sheet online, which lays out many ratios in a handy visual format.

Tip #7: Make sure you have enough power before starting a new project

Over the course of many hundreds of hours playing Factorio, I've noticed that new projects tend to be split into smaller phases, and the first phase of pretty much every new project should be ensuring you have enough power to accommodate your upcoming builds.

The vast majority of your factory requires energy to run. There are several different possible sources of energy - some renewable, others non-renewable. Our Factorio energy guide contains everything you need to know about these different types of energy and how to ensure your power production always exceeds your power demand. 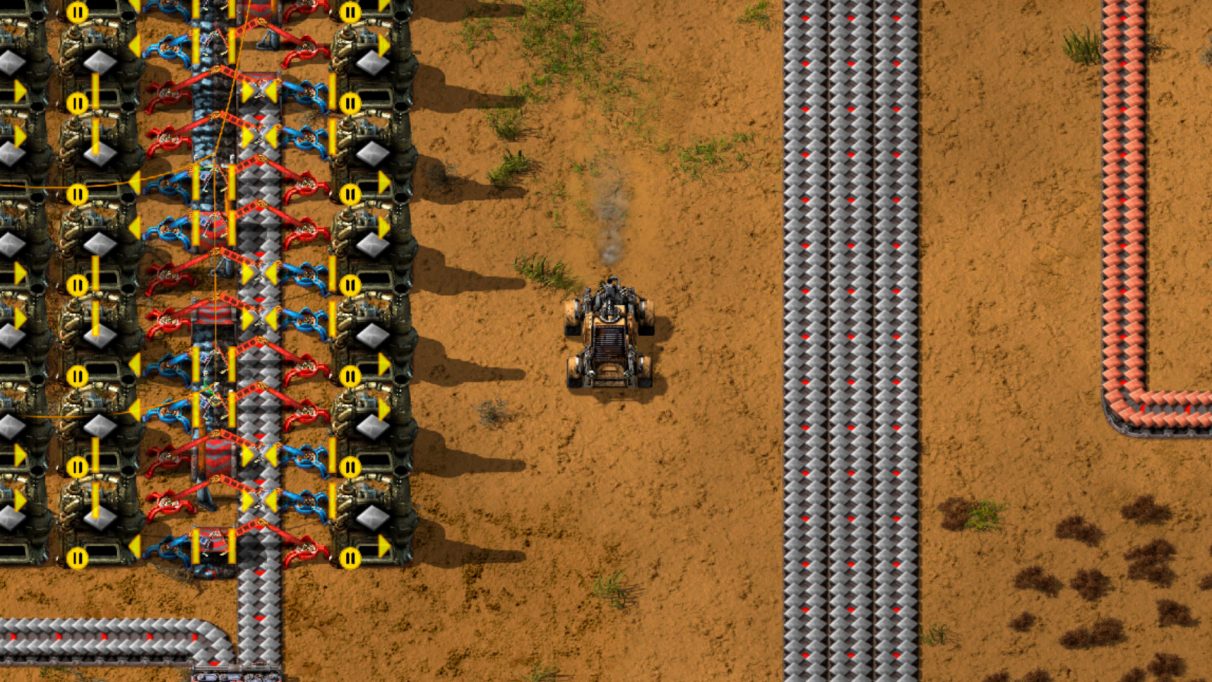 Tip #8: Get yourself a vehicle as soon as possible

You know how throughout history certain inventions and discoveries have catapulted civilization forwards by an order of magnitude each time? Well, Factorio is the same - and the first true leap forward in my mind comes when you obtain your first vehicle.

Traditionally, your first vehicle will be a simple car. But this car immediately allows you to travel immense distances far faster than you could ever do before. It allows you to more quickly expand your factory and deal with Biter threats. Getting your first car is the point where I would say Factorio's early game ends and its mid-game begins; and so I would heartily encourage you to race towards this goal as quickly as possible.

Tip #9: Make use of blueprints

Blueprints are a godsend in Factorio, and one of the game's principle quality of life features. If you've seen that it exists but you've never looked into it because you don't really know what it's about, then you should absolutely take a look at our Factorio blueprints guide so you can see exactly how blueprints can make your life so much easier.

This was a mistake I made throughout my first few Factorio games: I would manually construct far too much, when I could have spent 5 minutes putting together a little collection of assemblers and inserter arms to automate the process.

Tip #11: As your factory grows, consider building a main bus and mall

The Factorio community has come up with so many brilliant ideas over the years that Factorio has been in Early Access. Prime among these ideas are the main bus and the mall, both of which will help dramatically improve the efficiency of your factory as you head into the mid-game.

The construction of a main bus and a mall is a key aspect of Factorio's mid-game, and something you should plan ahead for (in terms of space and the availability of items) when you are first setting up your factory.

Biters are fast, vicious, plentiful, and more than capable of completely fucking up your plans if you don't treat them with due respect. And this is true of pretty much every stage of a Factorio game, because as time goes on, Biters will not only expand and settle new nests, but they will also evolve into far stronger types.

You'll need to evolve with them in order to defend your factory from the threats that Biters pose. And don't get complacent in those moments where you're ahead of the curve. You may have discovered that circling nests in your car and throwing grenades out of the window is a great way of dealing with Biters for the time being, but soon they'll grow too strong for this tactic, and unless you're careful you'll be overwhelmed. Be careful around Biters. Seriously.

I touched upon the power of trains earlier when talking about vehicles in tip #8, but trains are so powerful a tool in your factory that I need to make it into its own dedicated tip. There is so much that you can do with trains - not only does it enable you yourself to travel vast distances in the fastest possible manner, but once you understand enough about train systems you can create networks of wagons that automatically transport resources across your entire factory.

If you want to discover how to use trains to dramatically improve the efficiency of your factory, look no further than our Factorio trains guide. 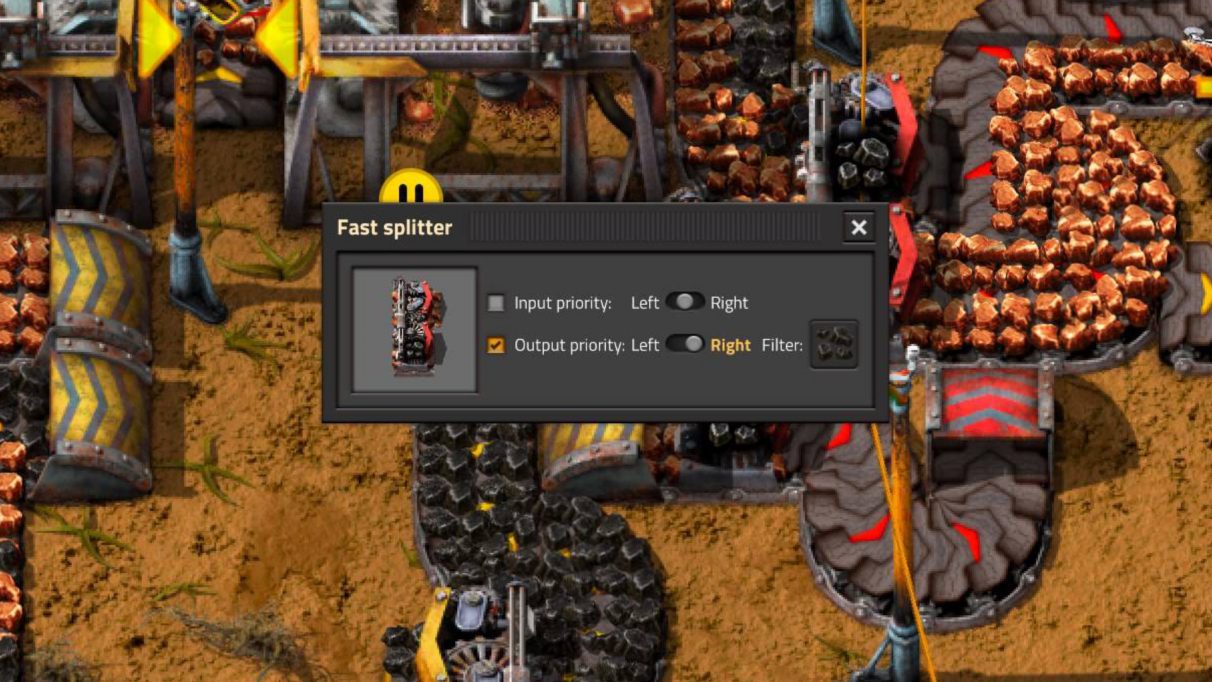 Factorio is filled with nifty little advanced features and functions of basic objects which you may not realise or understand at first. But they're indispensible in certain situations for making your life easier.

Here are a couple of examples: did you know that you can click the red X inside a chest, and then click one of the chest's storage slots to limit how much that chest is allowed to be filled automatically? Or that you can click on a belt splitter and prioritise the left or right lane for both input and output, and even have the splitter prioritise a particular type of item?

Try clicking on different everyday structures in Factorio and playing around with what is offered in their UI. You may find a cool new feature that makes life easier for you when designing and optimising your factories.

Tip #15: Use mods to expand the game and improve quality of life

Finally, it's worth noting that, while developers Wube Software have done an amazing job offering lots of quality of life features, there are many more to be gained by introducing Factorio mods into your game. There are mods that allow you to squeeze between buildings, to keep track of things like Biter evolution levels, to more easily detect bottlenecks in your factory, and much, much more.

Once you've played a fair amount of Factorio, you may also find that certain overhaul mods are exactly what you need to help reintroduce that element of discovery back into this endlessly addictive game. 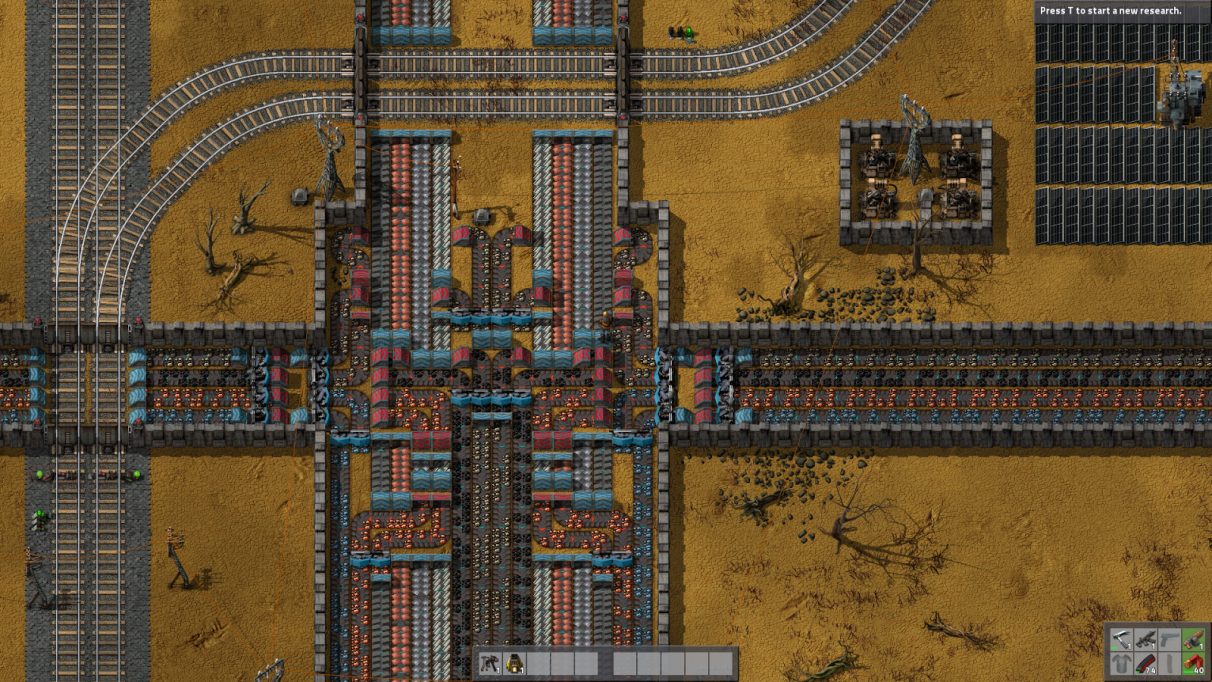 And with that, we'll wrap up this Factorio tips list - or else I'll be going on and on all day, and I have other guides to write after all! Speaking of which, if you're looking for a more in-depth guide on a particular aspect of Factorio, feel free to check out the links below.