The Sims 4 appeals to me because it lets me build the kind of Pinterest-worthy homes I'll never live in in real-life, so I'm often more excited about the game's Stuff packs than its game-changing expansions. This time is no different: the Paranormal stuff pack arrives later this month and as well as adding a new career and bringing back Bonehilda, it also adds some sweet looking desks.

I'm not being sarcastic. I don't know what's "haunting" about this desk, but it's delightful. And check out the terrarium cowplant in the background, too. 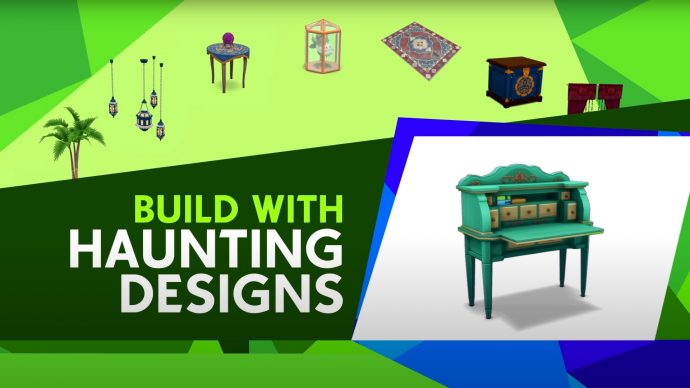 The actual Sims 4 community is more excited about the return of Bonehilda. The skeleton maid, seen in the background of the trailer still at the top of this post, was an NPC present in The Sims 1: Makin' Magic and The Sims 3: Supernatural. "The 'Bone' in her name refers to her being a skeleton," says The Sims fan wiki. Thanks Sims fan wiki.

The Stuff pack also adds haunted house lots filled with ghosts - seemingly both humanoid and of a new Kirby-like variety; the ability to perform a séance and get gifts from the dead; and a new career as a paranormal investigator. So now you can live out your Derek Acorah or Destiel fantasies even more easily.

The Sims 4 Paranormal Stuff will be released on January 26th for $10 (probably £10) on Origin and Steam.