The royal road trip of Final Fantasy XV [official site] is coming to PC (and with planned mod support too), it was announced this week during Gamescom. That’s good, we like road trips on RPS. So to find out more I sat in a room with the game’s director Hajime Tabata and his translator to quiz him on the origins of Prompto’s camera, the mysterious Final Fantasy committee, sports cars, and the big question: just who is the best boy in the band?

RPS: You’re part of a Final Fantasy committee but can you tell me exactly what that does? Because all I can imagine is that you are part of the Final Fantasy illuminati.

Hajime Tabata: Probably the most important function of the Final Fantasy committee is - because Final Fantasy is spread out among so many games - is basically to keep that brand consistency and brand identity for the games and to check what everyone is doing and make sure nobody goes beyond the boundaires of what the brand should be, and just to share information.

RPS: Final Fantasy has always been about journeying, but why did you choose to focus on the idea of a road trip in particular?

HT: I mean the idea of a road trip, that kind of element, was already in the original title, when the game was Final Fantasy Versus XIII [note: this is how it began its long development period]... It wasn’t made with a purpose that way. Then when we changed over to Final Fantasy XV and reassessed it and expanded the scope of it... we decided that because of the changeover in hardware to the new PS4 and Xbox One generation, technically that would be something very meaningful to do there… And also at the same time we thought that, even though it’s not a multiplayer game, we really wanted to create the idea that you’re going on a trip with real people, those comrades or buddies that felt like you were going on a real journey. That became one of the main focuses of the design. 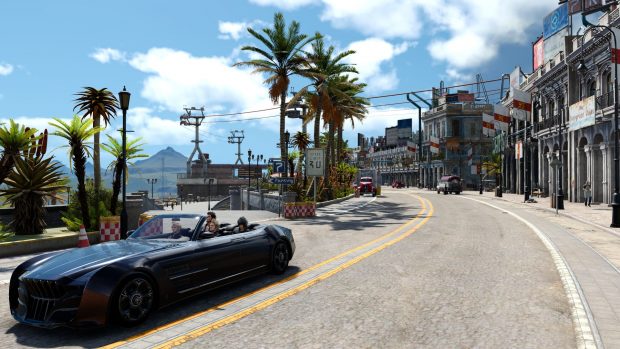 RPS: Forza Horizon 3 put the boys’ car – the Regalia - in that game but there was also a real car made by Audi based on the game, but what happened to it?

HT: Okay, there was someone that wanted to buy that off us and we decided to sell it to him.

HT: There were actually quite a few people who approached us last year saying they wanted to buy the car, but we worked out the logistics of it, we had to pick one of the guys but we had to get it to him logistically for a start. Because, I mean, the model currently can’t run on Japanese roads properly. It isn’t set up that way, and just thinking about that… we picked one of the final people and had to get it to him and, yeah, it was all good.

The thing with the car in Forza was actually a little bit more simple in those ways. Forza 2 especially was a game which we used for a lot of reference points for the road trip elements of Final Fantasy XV, so we have a connection to them there. A lot of people in my team really like Forza 3 as well. But in actual fact they were the ones who offered us - ‘look, we’d like to put your car, the Regalia, into the game’ … so that’s how that collaboration started.

RPS: You never considered asking Audi for a Regalia of your own?

HT: [Laughs] I couldn’t buy one of them myself. When you start looking to make one of those, it costs a lot of money. 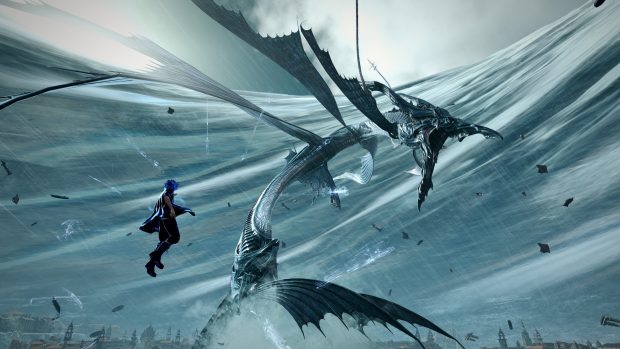 RPS: The fans reacted very positively to Prompto as a photographer in the game. How did that idea come about? Who came up with it?

HT: When we put out the Episode Duskae demo we took a survey from the fans about all the characters in the game. Unfortunately, the result of that survey was something that was quite difficult to listen to if you happened to be Prompto.

In order to address that we thought that we’ve got to make Prompto a character that people will be more relating to and they’ll like him better. So we tweaked around with it, tried to change a lot of things, tried to improve his backstory, the kind of atmosphere he has as a person. And also: we want to give him a hobby of some kind, and I personally directed all of that and made all those changes myself.

We already had by that time an idea for the ending, where we’d have the trip that the guys were on memorialised with photographs at the end of the game itself. And then we were like, okay, we’re going to make Prompto the guy who takes that photograph.

RPS: Final Fantasy as a series has evolved over time and it has, with this one, drifted a little from fairytales and magic to including some more mature things. Why do you want to steer it in that direction?

HT: I think one of the things about the Final Fantasy series is that each numbered episode, main episode in the series, is obviously handled by a different person, a different team, and they all have their missions with what they want to achieve with each of those games. So it’s not really that there’s one overall direction with the whole series, it pretty much depends on what the individual team wants to achieve at each time.

Certainly what I tried to do, and what I wanted to challenge my team to do, was first of all to create a world which was very similar to the modern world, the real world, but include Final Fantasy fantastical elements within that world, that’d be a great challenge to take on. And from a gameplay side I really wanted to update the way you actually play the game, given what you’d want from a modern day game… in the future we’ll have different numbered titles and quite different directors and they’ll want to do different types of things. 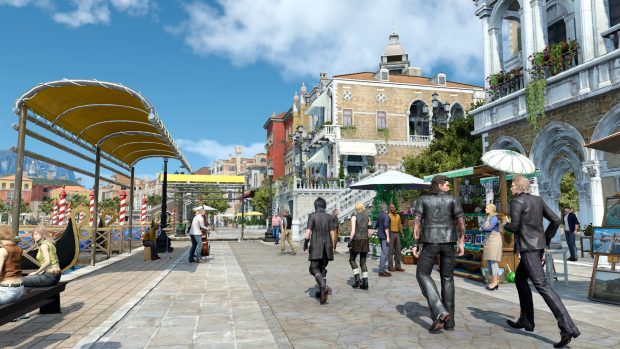 RPS: But a multiplayer mode is also planned, right?

HT: Yeah, that’s on the booth we’re running, you should go and take a look. Basically this autumn we’re adding it to the game. It’s a mode where you can have four player co-operative missions with friends. We actually did a small beta test at the start of the month.

RPS: Oh, I’m just behind then.

HT: It was for a small limited time, it’s okay. The idea is that it basically takes part at a certain period of the story, of the Final Fantasy XV saga, where you get to play as someone from the world, a character from the world. You create your own avatar and customise them as you want them… And the other thing is the combat system which has been adapted from the main game. People really seem to like the way you can interact as four players and use that combat system there.

RPS: It’s been in development a long time. As you say it was Final Fantasy Versus XIII beforehand. Do you feel relieved to see it out there?

HT: I think certainly back when it was still Versus XIII and I took control of the project, there were a lot of people who had been waiting for that game for a very long time and had great expectations towards it. So, my god, there was no way we could say “nah sorry, we didn’t manage to develop anything” and just close it there. So I took on that responsibility to deliver to those players something of what they were looking for. But I think coming forward to now, especially since last year with the end of the console release and since then moving on and expanding and improving the game until where we are now, I do feel a certain closure on that point. A feeling of satisfaction and achievement at that, obviously. Now we sort of shift gear, as it were, moving onto the next phase, which is to give as many people who didn’t play the console version the opportunity to enjoy and play the game. 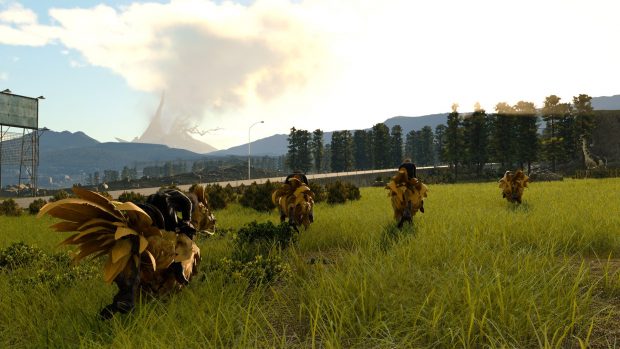 RPS: All right, I’m going to ask you something you’ve likely been asked before. Who is the best boy?

HT: No, I mean I really love the way all four of them develop and change as people over the story, but I think the way Noctis develops as the protagonist of the story and as a person is personally the one that I would like best.

But one other thing I am incredibly relieved about is Prompto, touching back on what I said earlier about the survey, yeah, because he ended up getting such a bad result. Even with all the sub-characters outside the [main characters] he was way down there. But because it was my effort to kind of reel him back and make him a character people would like, and because we managed to do that I’m quite relieved he turned into a character that people liked. Originally I was thinking: okay, he might be a slightly difficult guy to relate to when you take him in isolation, but if you see him interacting and bantering with all his mates at the party maybe people will be able to open up to him and people’ll like him. But when we saw that he was such an unrelatable character… we thought: “Oh. We have to change him and make him better.” And I really did put in quite a lot of effort to bring him back to something people would like, and I think we achieved that.

HT: Yes… the one we showed last year at E3 was very much a demo done for the show, sort of a technical experimentation. We got a lot of… information, a lot of know-how filled out because of doing that. And so when we decided we were going to do a proper PS VR game, a proper release, we sat down again and we discussed what we had to do and said, okay, the first VR game we do has to be this.

To just explain what kind of game that is, in the main Final Fantasy XV you’ve got fishing is one of the activities you can take part in. That fishing simulation was very highly regarded. We got dedicated fishing magazines coming to us and saying, wow, this fishing game is really good. So we decided we want to take that and make it even deeper and even better as a VR experience.

Final Fantasy XV Windows Edition is due out on Steam some time in “early 2018”. The Monster of the Deep fishing game is due 23 November (but only confirmed for PSVR so far)