Square Enix have launched the promised official mod tools for Final Fantasy X, letting all and sundry tinker with those good boys. Right now, the tools can replace models, add new weapons, and add new costumes, but Squeenix have said before that they plan to keep expanding their scope to make more types of mod possible. The FFXV Steam Workshop, which previously only hosted mods Squeenix themselves made, is slowly filling up with well, multiple Keyblades so far and one cursed Thomas the Tank Engine. But I'm sure great things are to come.

The initial mod tools let players replace the models and/or textures of characters, give characters new outfits, and alter weapons or create new weapons with new models and attributes.

Curiously, Squeenix have decided to cap custom weapons at 100 points across all attributes, which they say "ensures that they are balanced against other weapons." I mean, yeah, but if someone can already replacing every best boy with vaping moogles in lingerie, what's the harm of overpowered weapons?

The tools, confusingly named the Mod Organizer, launched along patch 1.24 last night. If you have FFXV on Steam, you should now see the tools in the Tools section of your Steam Library. If you have it on Origin or the Windows Store (anyone?), nab 'em here.

To help would-be modders get started, Squeenix have also written an FFXV modding guide to introduce the tools and walk us through the basics. Like: replacing Noctis with a monolith. 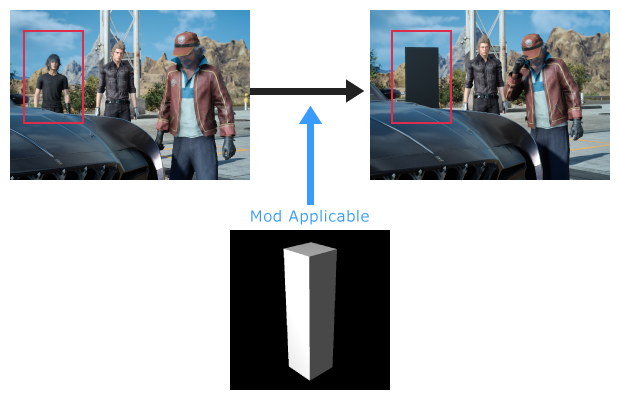 Players have been modding FFXV for a while, hacking around in its guts, but the official tools should be more welcoming. And more useful, if Squeenix do keep adding to them.

"Mod support has always been an important aspect of FFXV Windows Edition and we want to give you the freedom to do a whole bunch of cool things with mods so we will be adding more mod tools and functionality in the future," they say. "However, it's going to take a bit more time to create and add all of the tools."

I'm quite curious to see what modders might do with this anime boy band road trip.