Just when we got to grips with the lack of Thermal and Suppressed Assault Rifles in Fortnite, patch 9.01 brings the new Tactical Assault Rifle to the table. This new weapon seems like a variant of the Scoped Assault Rifle, and time will tell how it fares compared to the other weapons. Our Fortnite Assault Rifles guide will walk you through each of the rifles still available in the game, with fully up-to-date, practical tips, stats, and strategies for each one. 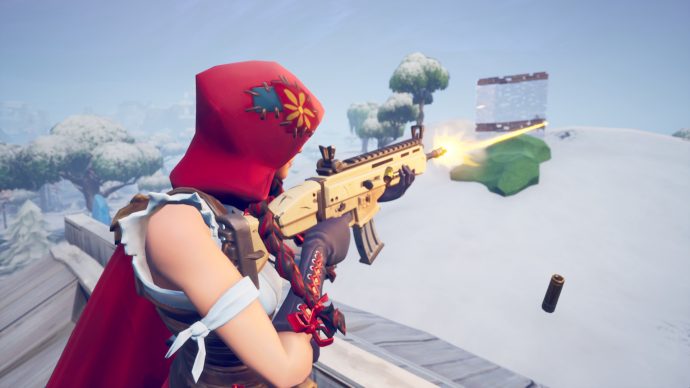 We've spent a lot of time writing lots of words on every aspect of Fortnite, all of which you can reach from our central Fortnite guide hub. We've got tonnes of beginner-friendly and advanced tips and tricks on everything from Fortnite weapons to Fortnite building and editing to completing the various Fortnite week 6 challenges. So take a look!

Assault Rifles come in all sorts of shapes, sizes and rarities, but they all share a few common traits. They are hitscan (no bullet travel time), they have first-shot accuracy, and they are unrivalled at medium range.

An Assault Rifle can also be used to great effect at long or short range, but they are of course not quite as suited to these ranges as other weapon classes such as the Shotgun or the Sniper Rifle. Regardless, they are the only weapons that can be used effectively at any range, and as a result they should always find a place onto your hotbar early on in a match. If you think you can win a Fortnite game using just SMGs and Sniper Rifles, you're mistaken (or you're by a vast degree the best player in the lobby).

For more information on ideal weapon loadouts and powerful weapon combinations, take a look at our Fortnite loadouts page.

Assault Rifles vs SMGs - when to use ARs

Assault Rifles are commonly compared to SMGs, and it's easy to see why, as both classes of weapon sport large clip sizes and a high rate of fire. But SMGs sacrifice accuracy in their bid to be the fastest, most shreddiest guns in Fortnite, whereas Assault Rifles, with their measured approach and relative lack of bloom and recoil, are much more effective at medium and long range.

If you're trying to burst down an opponent (or a structure) at very close range, the SMG will generally outperform the Assault Rifle. But if you're 100 metres away, that SMG is going to be useless, while an AR can still happily peck away at your opponent's health from afar.

Of course, this doesn't need to be an either-or situation. Both types of weapon occupy completely different niches in the Fortnite arsenal, so it's well worth taking both and learning to switch between them quickly depending on your situation.

The Scoped Assault Rifle is much more like semi-auto sniper rifle than standard AR, having a slower-firing than their peers, making it far less versatile, but better suited for long-range encounters.

We'll go into more detail about this subset of Assault Rifle below, but it's worth recognising that the Scoped ARs are a vastly different beast than regular ARs, and there's not too much point in comparing them.

Despite slapping a scope on this bad boy, it's more akin to an SMG than a standard AR. It has a nice high rate of fire and can dish out decent damage to players and structures, but has a huge drop-off at longer ranges.

Like the Scoped Assault Rifle, we'll be going into more detail on this one below, but just so you are aware that this is very different to the regular ARs and you shouldn't really use that as a benchmark when cross-referencing the two. 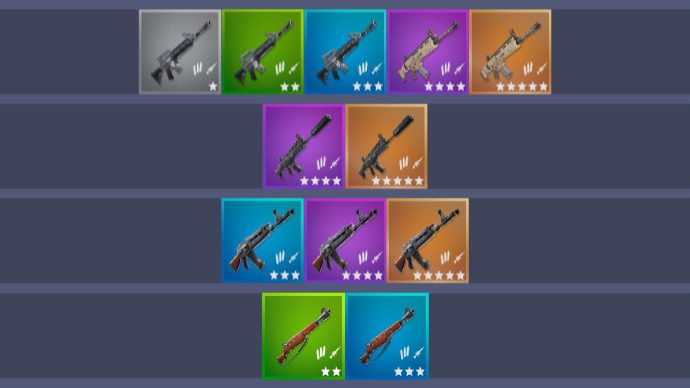 Now let's take a look at all the different Assault Rifles currently available to you in Fortnite, and how they stack up against one another, as well as their ideal circumstances and shortcomings. While we reference the different weapons' stats, we haven't included them here, but just head over to our Fortnite weapons guide for detailed stats on every single weapon in Fortnite.

The Infantry Rifle is a curious cross between an Assault Rifle and a Sniper Rifle - but not in the same way as the Scoped ARs you'll find below. The gun packs a punch over great distances, dealing more damage per shot even than a Heavy Assault Rifle. Combined with its extraordinary lack of bloom and quick to return first-shot-accuracy, this makes it a powerful semi-auto long-ranged weapon that beats the Scoped Assault Rifle at its own game many times over. Its only downside is a tiny mag size relative to its considerable rate of fire.

The V8.20 Patch Notes, which you can read all about in our Fortnite Patch Notes guide, provided some changes to the Infantry Rifle. Before, its main benefit was zero damage dropoff; this is now gone, with the gun featuring the same dropoff as other Assault Rifles. But instead, the gun is now hitscan, meaning you no longer need to adjust for bullet travel time. This is a huge benefit to the weapon - which Epic knows, as shown by their subsequent nerf of the gun's damage per shot from 45/42 to 42/40 to prevent it from being overpowered.

This is a very powerful gun in the right hands, but you shouldn't really use this as a replacement for your SCAR. You should use it as your long-range option if you desire a faster-firing alternative to the bolt-action snipers. With a good aim and some solid game-sense on when to use it, the Infantry Rifle is a top-notch weapon.

The standard Assault Rifle is characterised by middling stats across the board. They also occupy every rarity level, which means there's quite a bit of variance between the fairly lacklustre Grey AR and the wonderfully powerful Gold SCAR, particularly regarding the amount of bloom each gun suffers from while firing. But as a whole, these ARs are fast-firing, effective at any range, and excellent at taking down both players and structures at medium range.

While not as untouchably superior as it used to be, an Epic or Legendary SCAR is still a powerful item that's well worth keeping through to the end of a match. It can deliver quick and painful damage, particularly if you headshot your target, which is more than possible given the first-shot accuracy and low bloom of the SCAR; and it can also be used to pressure enemies and disrupt builds at ranges beyond what an SMG can handle.

For its rarity, the Drum Gun can be a monster. Appearing only at uncommon and rare rarities, the Drum gun has decent accuracy, a fast fire rate, and packs a punch. What makes this weapon such a good one to use however is that it's even good when hip-fired, outclassing shotguns in many cases.

This is bogged down at uncommon level by a rather long reload time, but should you manage to snag a rare one, you'll be laughing as you spray a hail of bullets into your foes. Couple this with a long-range weapon solution, such as a Sniper Rifle of your choice and you're pretty much set for the game.

Oof. This gun packs a hell of a punch. Available in Rare, Epic, and Legendary colours, this gun deals significantly higher damage per shot than any other Assault Rifle, with the consequence that all its other stats are slightly worse to balance it out. Lower fire rate, smaller clip size, longer reload time, and a greater recoil and bloom to contend with. But seriously, you get nearly a 50% increase in damage with every shot over the SCAR. That's just disgustingly powerful.

The thing to remember, though, is that the Heavy AR's low rate of fire makes it less effective for suppressing the enemy, which means - as with the FAMAS - you should consider taking an SMG with you if you're using the Heavy AR. Or conversely, if you don't have an SMG on your person, you should probably pick a SCAR over a Heavy Assault Rifle just for the suppression and sustain ability.

The Scoped Assault Rifle combines a bunch of useful traits - fast fire rate, hitscan, a scope - but it's unfortunately not a weapon that sees a lot of play in most Fortnite matches. Its low damage is very underwhelming even compared with a Grey Assault Rifle, and you're much better off using an actual sniper rifle, or even a Scoped Revolver.

Regardless, the Scoped AR can be used to good effect, and the key to doing this is to never let up the pressure. The only way to make up for the Scoped AR's low damage is to headshot your enemy several times in quick succession before they even know what's happening. This is actually fairly easy to do if they don't build, because like I said, the Scoped AR is nice and accurate at long range. But if they do start building, the Scoped AR's time to shine is over and you'd best switch to another weapon to continue the fight.

Given its tight spread, it's more of a weapon that's suited for closer ranges than the Scoped Assault Rifle. It's a fully automatic weapon and includes a headshot multiplier of 1.75x. But for its rarity, it's really not that good an option as an AR. When used to fulfil the role of an SMG at close range though, its usefulness becomes a little more apparent and given that the Suppressed SMG is the only other SMG in the game, that's important. Use this in the same manner as the Drum Gun or Suppressed SMG. Also, that scope is purely for cosmetic effect. Such a waste. 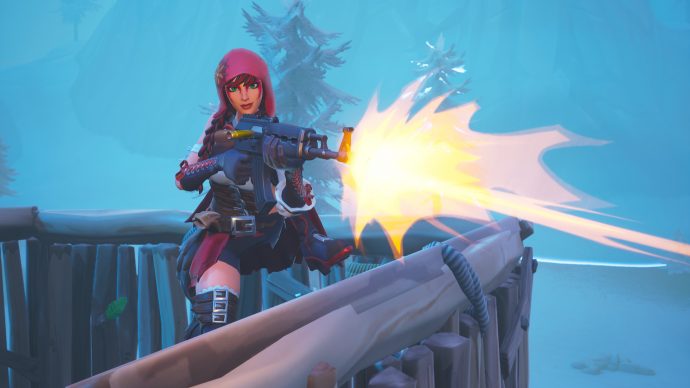 Finally, let's finish up with some practical tips and tricks on how to perform well with any kind of Assault Rifle in Fortnite.

That wraps up our Fortnite Assault Rifles guide, but be sure to check back here after Epic makes any adjustments to existing Assault Rifles, or switches around the roster. We'll be working hard to make sure all our Fortnite pages are fully up to date, including this one. So until then!