The number of confirmed ray tracing and DLSS games is still pretty small at time of writing, but today's big Nvidia Ampere reveal added another key addition to the slowly growing line-up: Fortnite. I'm not entirely sure why, given its art style largely consists of big, blocky worlds and colourful cartoon characters, but hey, if you've been particularly looking forward to doing battle with Fortnite's zero-chill sharks with added ray traced reflections, you'll be able to get your RTX on fix at some point during Fortnite Chapter 2's fourth season.

It's not just ray tracing support that's coming to Fortnite, either. It's also getting DLSS support, as well as Nvidia's new super low latency tech, Nvidia Reflex, which they also unveiled during their RTX 3000 live stream. To see it all in action, take a peek at Nvidia's RTX teaser trailer below.

Starting with the ray tracing, Nvidia have confirmed that Fortnite will be getting the full works, including ray traced reflections, ray traced shadows, ray traced ambient occlusion and ray traced global illumination. In short, all the same techniques you'll find in yer Cyberpunk 2077s and Metro Exoduses.

Naturally, the ray traced reflections and shadows will add realistic lighting effects to the game, including reflections on bodies of water and other reflective surfaces and dynamic shadows that "realistically stretch across [a] scene," according to Nvidia. Shadows will also soften as they extend further into the distance, and will change dynamically according to the in-game time of day. 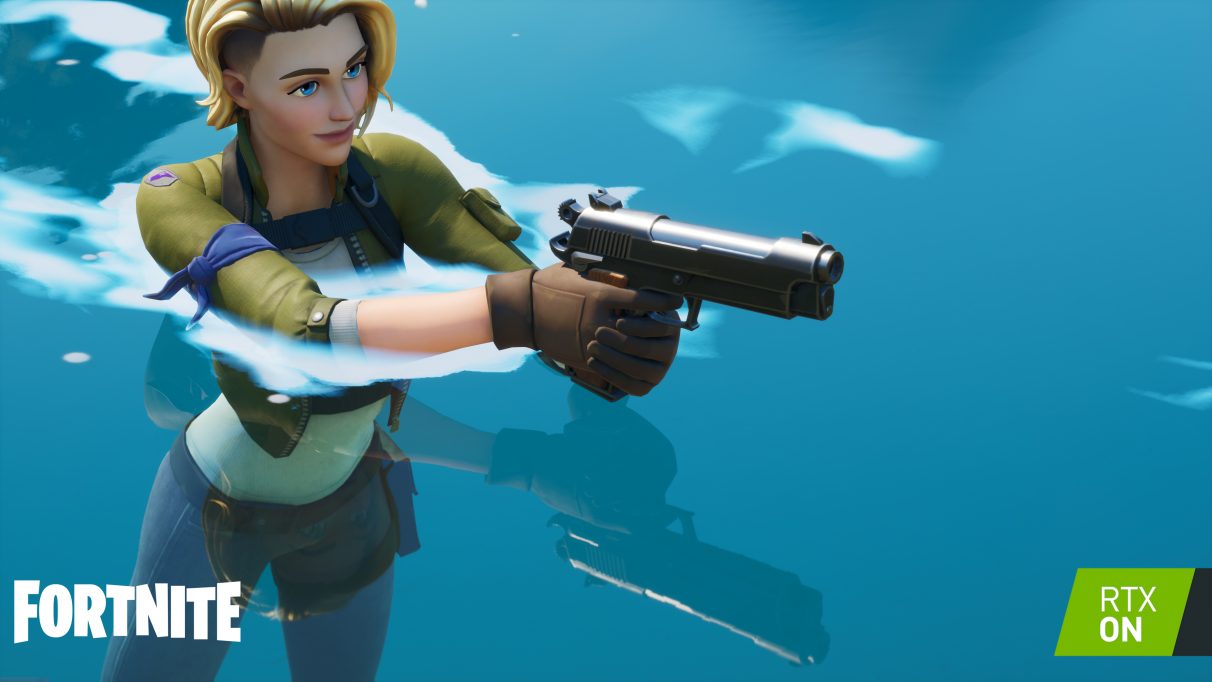 As for ray traced ambient occlusion, these are the soft, subtle shadows that appear when objects or surfaces come together and help ground objects within their environment. It's not quite as obvious or eye-grabbing as ray traced reflections, but at least it will help Fortnite's copious selection of house furniture feel that bit more realistic - if you can stand still long enough to appreciate it, that is.

Last but not least, ray traced global illumination should provide more realistic lighting when you're bounding around outside, improving the game's dynamic lighting as day turns to night. Again, it's a bit more subtle than other ray tracing techniques, but it's all in the aid of providing a more life-like setting in this err... big cartoon battle royale.

Fortnite is also getting DLSS 2.0 support to help improve performance, too, although given that Fortnite can practically run on a potato these days, I'm not entirely sure whether anyone will actually get the benefit of it - even with all the ray tracing effects turned on.

Either way, Nvidia have said they're teaming up with "top Fortnite creators" to make specific ray tracing-heavy maps to show just what the game can look like with all the ray tracing gubbins dialled up to 11. They're calling it the RTX Treasure Run, and it will be accessible via the game's Creative mode. The map will drop players at the entrance to a museum, according to Nvidia, where they'll be challenged to a scavenger hunt that highlights all the different ray tracing effects I've just outlined. What fun. No word on when the RTX Treasure Run will be available just yet, but watch this space.

Finally, Fortnite is also getting Nvidia Reflex support, Nvidia's new low latency tech that will let you, and I quote, "acquire targets faster, react quicker, and improve your aim". Facts, people. True facts. Personally, I'm less convinced this will suddenly turn everyone into pro Ninja-likes, but hey, maybe I'm just too ancient to appreciate the difference between 53ms of latency in Fortnite's natural state versus the 35ms of latency you'll experience with Reflex turned on. Who can say. For more info on how Nvidia Reflex works, you can read the full breakdown on Nvidia's website.

Remember, if you need a reminder of what went down in Nvidia's RTX 3000 reveal today, you can catch up on all the specs, price and release date info over in our Nvidia Ampere hub, as well as take a look at all the other ray tracing games you can play on PC right now in our confirmed list.