If you click on a link and make a purchase we may receive a small commission. Read our editorial policy.
Developer: The Coalition
Publisher: Xbox Game Studios
Release: September 10 (6th for Game Pass Ultimate subscribers)
On: Windows
From: Microsoft Store, Steam
Price: £50/€70/$60

I did not expect Gears 5 to feature an extended Hamilton parody. And yet here we are: escaping a besieged city by hunkering down in a theatre, its walls pasted with the iconic image of Alexander Hamilton pointing to the stars. Only it’s not Hamilton, but Nassar Embry, who ‘Gearspedia’ tells me was the founder of the Coalition of Ordered Governments. And it’s not just an easter egg, but a committed bit: rooms full of Georgian era wigs, collectible lyric sheets (Lin-Manuel Miranda has nothing to fear) and a fight with a meat beast on a rotating stage set to Embry’s soundtrack. Squint and it’s another room of waist-high cover, sure, but the jazz hands are a jolly distraction.

Those jazz hands soon return to more traditionally manly pursuits like thumping and clenching because you can’t express your emotions to your father, but the playfulness persists. You fight on frozen lakes, shooting the ice to dunk enemies into the cold. You sneak round platoons of slumbering murder bots, synchronising battery tugs with a co-op pal to avoid a mass activation. There’s an extended siege in a flight training facility where a malfunctioning centrifuge beheads friend and foe. Or my favourite of all: a push across stormy sand with lightning strikes causing pillars of fulgurite to bloom to life, providing fresh cover or just a pile of pointy rocks to push onto a monster’s head. It’s marvellous. 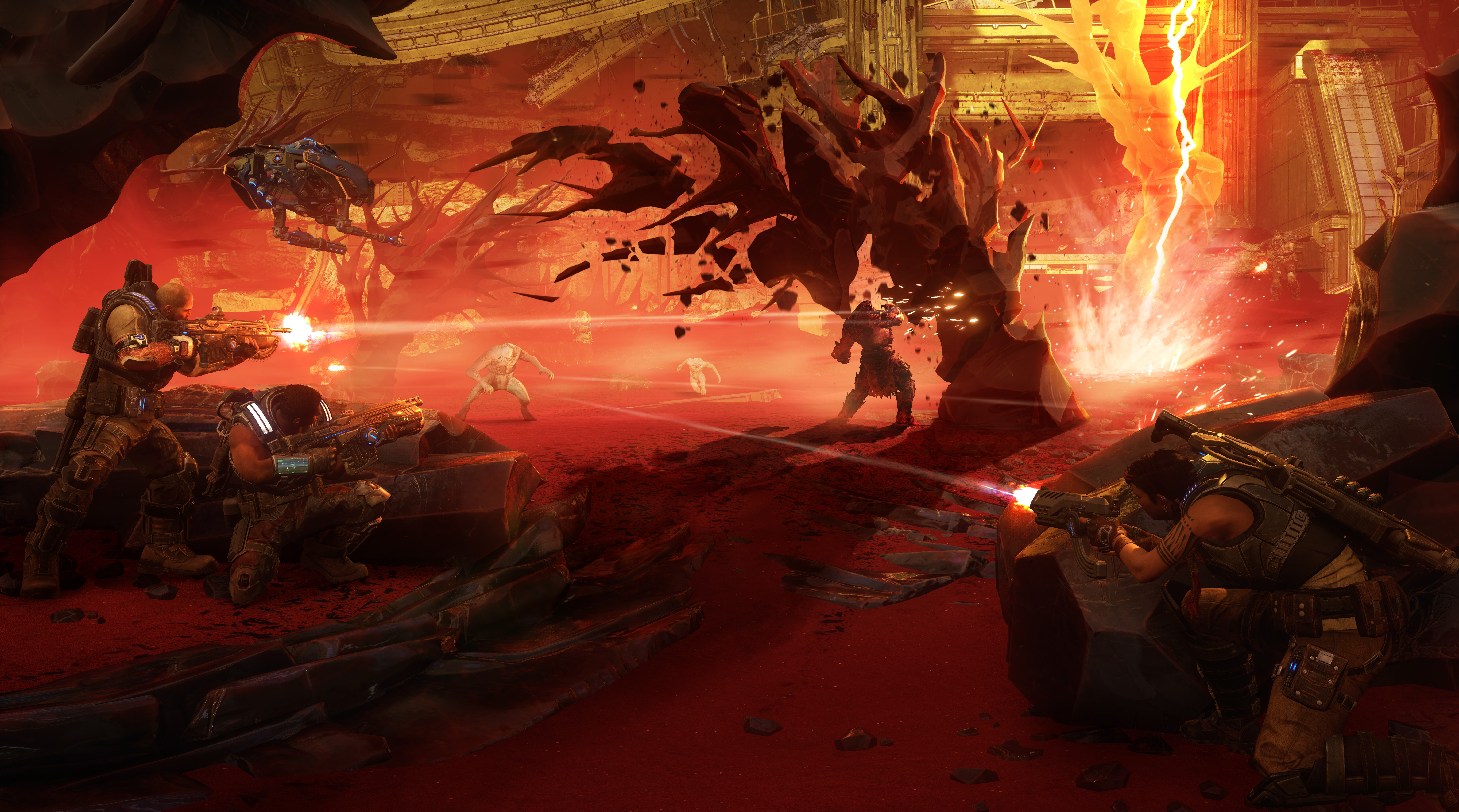 Where was this playfulness in Gears of War 4? That game marked The Coalition as nothing more than caretakers, producing an accurate, but safe, facsimile of Epic’s earlier work. It was The Force Awakens approach: familiar beats, younger cast, a few grizzled oldsters for the fans. Does that make Gears 5 The Last Jedi? Marcus Fenix doesn’t sup from a marine cow at any point - more's the pity - but there’s a wit and visual invention to its endless parade of battles that reminds me of that oddball entry. Superficially, there’s also a desert region where shifting the top soil reveals darker hues underneath. Convenient for this metaphor, but probably a coincidence.

That desert region is one of two locations where Gears 5 does depart the template more dramatically. After an opening act of linear streets and Broadway bust-ups, the action shifts to semi-open world regions. You get a fun wind-propelled skiff that primarily exists to let glorious skies go whizzing by at a silky frame rate, but also lets you tackle certain story tasks out of order, or sniff out side missions. If you opt to play in co-op, as I did for about half the campaign, the non-driver is forced to man a radar turret with such flimsy range you may as well treat it like a baby seat and just enjoy the ride.

It’s a hefty roadie run from Gears’ usual corridors, but baby steps by open world standards; more Half-Life 2: Episode 2 than Fallout. Aside from a few well signposted caches - look across sand and ice for bits that aren’t sand and ice - there’s not much to discover by accident. The ice world even crowbars a giant radar into the story progression to ensure you don’t miss a single point of interest. Is it unfair to ask more of exploration, given that it’s The Coalition’s first expedition? At its heart Gears 5 remains a cover shooter, so really the skiff can only serve the purpose of transporting you between that cover. And while it feels like a lot of developmental effort for little explorative return, the structure does allow us to visit pockets of action that wouldn’t find a home elsewhere.

The main benefit of not mainlining the central story is collecting parts for your combat drone, Jack. Previously operating as a glorified key, Jack now has abilities that liven up the combat system. Handy, as it has to stay fresh for a campaign twice as long as any that came before. Simple radar and shield powers make way for mind-control and invisibility cloaks allowing you to, if not radically change the way you play, at least have some say over how you kick things off. Stringing together cloaked backstabs and hiding away for a recharge doesn’t feel like COG-endorsed tactics - these are the guys who thought a bayonet to the stomach was too subtle - but it’s a welcome change of pace from endless mulchings. 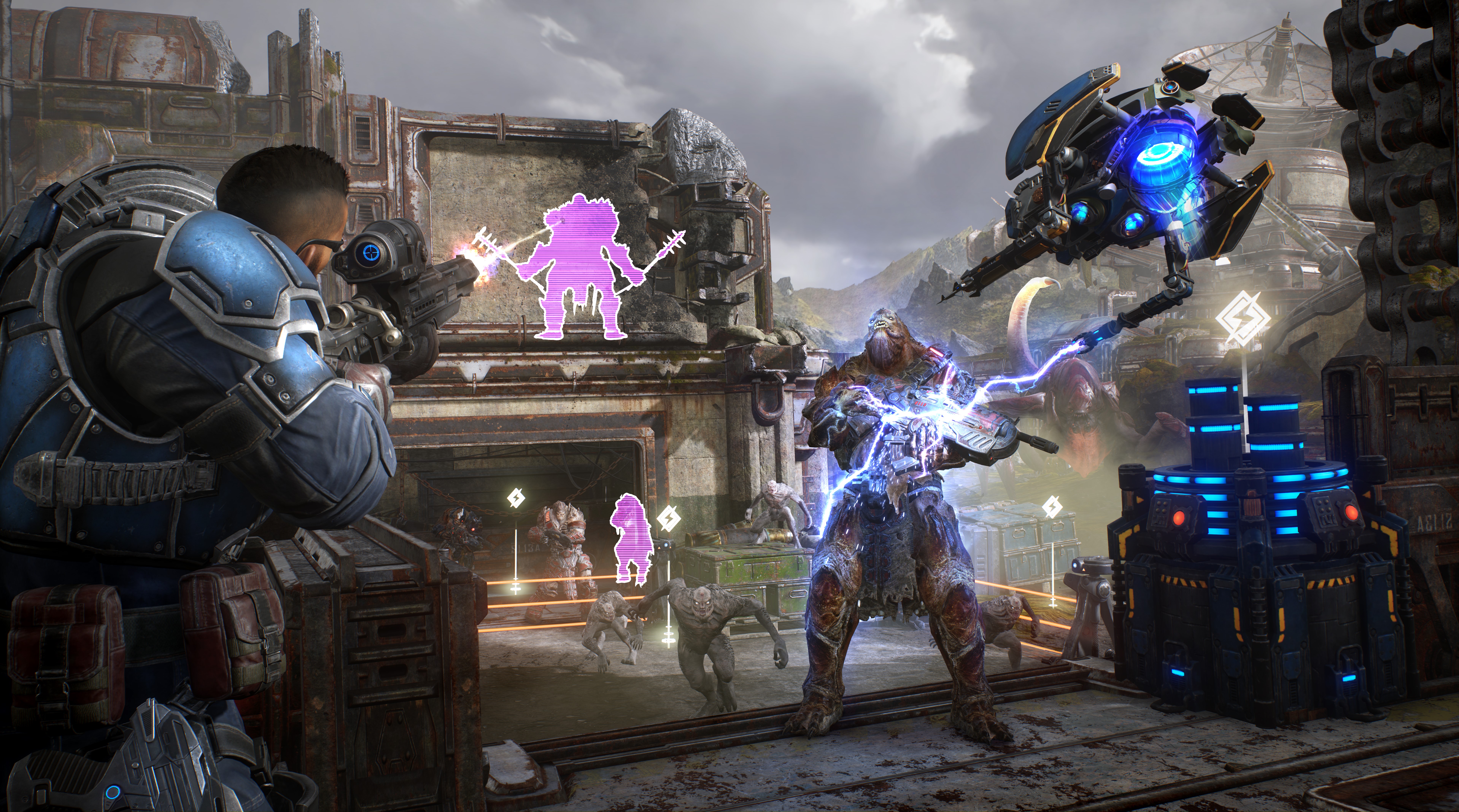 Jack becomes more important on trickier difficulties, especially his power to place shock traps during siege waves, or beef up lead just as a boss opens a gooey crevice. It’s a fun wrinkle in co-op where you both equip different powers, and knowing when to drop a boost or revive makes all the difference. Playing as Jack - an option for two- or three-person co-op (local splitscreen for both, too) - is less fun; firing his zapper lacks the sledgehammer-on-watermelon impact of bullets, and fetching weapons for friends isn’t half as fun as sending him to yoink rifles from sniper perches. Playing as Jack does let you briefly inhabit swarm troops with mind-control, however, which is a fun nod to Gears of War 3’s beast mode.

However you choose to apply your vicious robo-bud, there’s no denying he grows the action vocabulary of Gears 5, in the same way that ice water takedowns and fulgurite toppling does. And that lethal lexicon only expands with every hour: here, let’s swap the lancer’s chainsaw for a mortar; yep, Jack can open those steam vents onto the goons using them as cover; ouch, that crystal-tipped mace really did just turn a whole squad into soup. It’s only when you’re in the final stretch that you realise you haven’t thrown a frag grenade into an emergence hole for a good ten hours. You were too busy with new ideas, or fresh combinations of old ones, to notice.

There’s also a chance you were blinded by the razzle-dazzle of the thing. It seems a lifetime ago that Gears was heralded as the graphical benchmark. Remember Epic showing new Unreal updates with GoW tech demos of wibbling meat tech? Gears 5 rediscovers its wow after the conservative GoW4. Partly through art direction whisking us to places where the play of light can impress - glistening ice caves, buried rooms gradually exposed under windy assault - and with explosives and electric beams that fill them flashy particle effects. An RTX 2080 (not a brag, but a perk of being married to a hardware editor) made swift work of the game at max settings at 4K and 60FPS, looking tasty on split-screen, too.

I should note that I did experience some visual bug-outs: cutscenes would stutter and temporarily freeze, and at one point all the sand in the desert flew into the sky, which was odd. The game has a day-one patch and AMD and Nvidia drivers are still on the way, so I’m hoping they’ve worked out how to anchor the sand to the floor. I’m sure Katharine will have hardware wisdom to share soon.

I’ve also only had limited time to test multiplayer elements; the campaign is but one flavour of a ‘everything but the kitchen sink’ approach to cover shooting. Other varieties include Horde (the returning wave-based mode that I’ve only been able to test with AI helpers) and Escape, which is a new mode that sees you outrunning a wave of poison gas with just a pistol to begin with. It’s pitched as a 20 minute alternative to Horde’s hour-long requirement and is better explained by Brendy’s E3 hands-on. I like its more careful pacing and having to make every bullet count - finally finding a sniper bullet or two feels like a tangible turning of the tables - but only time will tell if the skill card upgrade system will evolve the feel of the runs enough to make high-score chasing worthwhile. 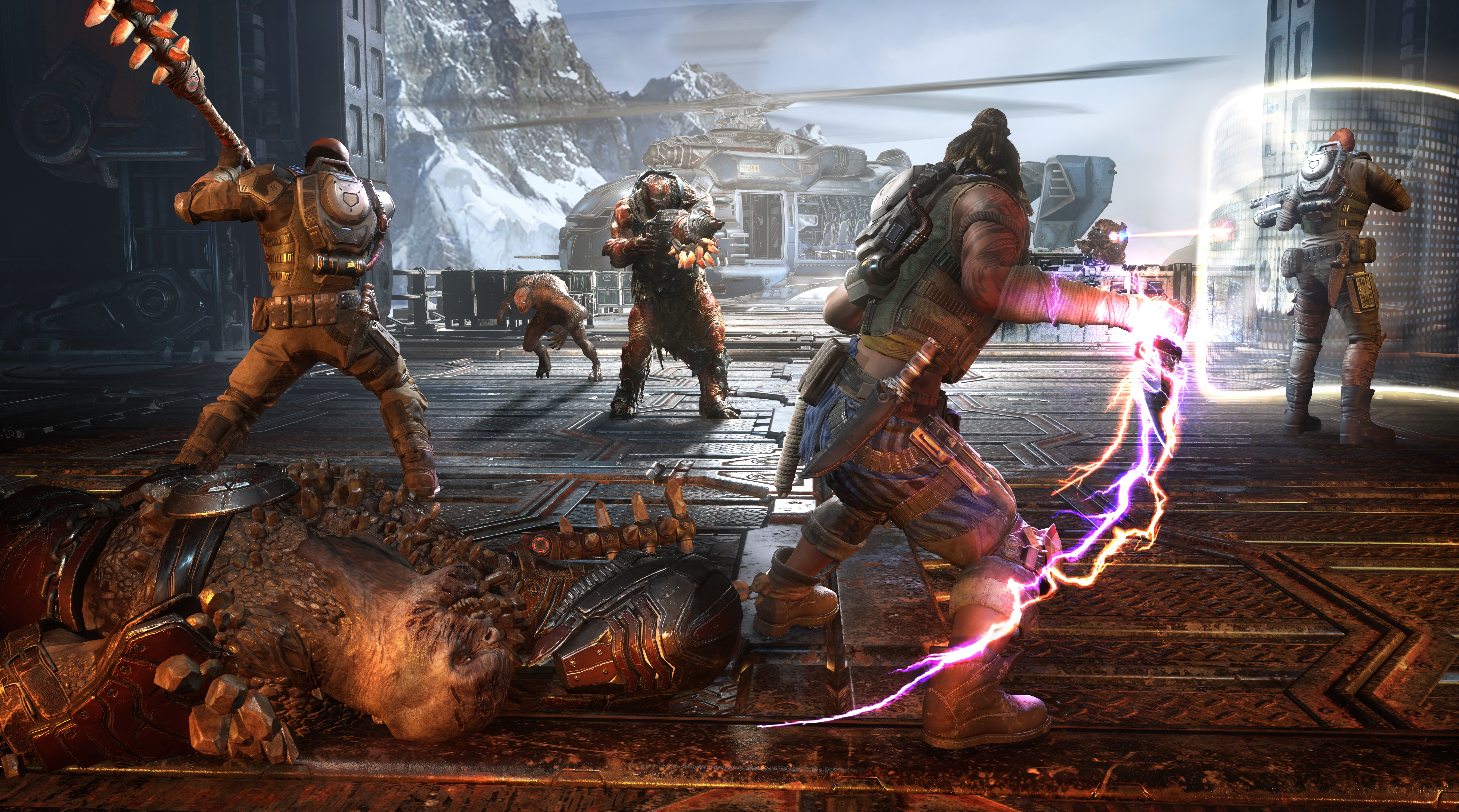 Two hours of traditional Gears multiplayer proved harder to decipher. Mainly because there’s a Terminator cross-promotion, which meant I spent those hours chuckling at Linda Hamilton repeatedly bellowing ‘Terminated!’ as she sawed through monsters’ faces. Like, we get it Linda: you are from Terminator. Just chill. (Although playing Bodyguard mode and protecting your leader-bot from an army of T-800s as Sarah Connor adds a weird pop culture frisson.) There’s definitely a dose of campaign’s more playful energy in the maps; I’ve got a lot of time for the king of the hill arena that has a runaway train plough through the capture point.

I guess the takeaway from this is that however you want to couch behind cover and shoot monsters, Gears 5 has you catered for. Whether it’s crouching with friends and shooting waves of enemies; crouching through furious set pieces in campaign; crouching and getting killed by teens who are better at the game than you; or crouching with pals and worrying that you should really be running from the poison gas and not crouching at all. It even has you covered if you want to crouch and shoot Linda Hamilton. Which is a frankly sinister desire. All this can be enjoyed as part of Xbox Game Pass (and sampled for a £2 trial price).

It’s the campaign crouching that impressed me the most, the way it dips its toe it a ‘light RPG’ direction. I’m enjoying this new trend of RPGs-but-not-RPGs; action games that borrow the language of the more complex genre - side quests, character levelling, exploration - but in such a way that there’s never any doubt you’ll miss a pixel of it. I’m thinking of things like Metro Exodus or Control; games which put you on a longish leash, but take you for a walk around a world that is so hand-crafted that it feels rude not to gobble the whole thing up. Gears 5 left my belly nice and fat, and keen for the next course.