The folks of Playerunknown's Battlegrounds have made one of the most significant adjustments to how the game is played, via the Weapons Balance Update (Patch 12), which re-balanced everything from damage to scope reticle to movement speeds while certain weapons are equipped. It's such an intricate and deep re-alignment of the entire game that Plunkbat players are encouraged to take part in a new survey in order to make sure PUBG Corporation haven't, you know, completely ruined the game. In exchange, there is a lottery system for survey participant rewards.

Also, if you're still not on board with Plunkbat, please read about Plunkbat's creator agreeing with you. You're wrong, though, and so is he.

Here's a visual breakdown of the changes that have been added via this update, although you can read a painstakingly precise detailing here, which includes not only a lot of mathwords but other game additions, like a new gun and a new vehicle. 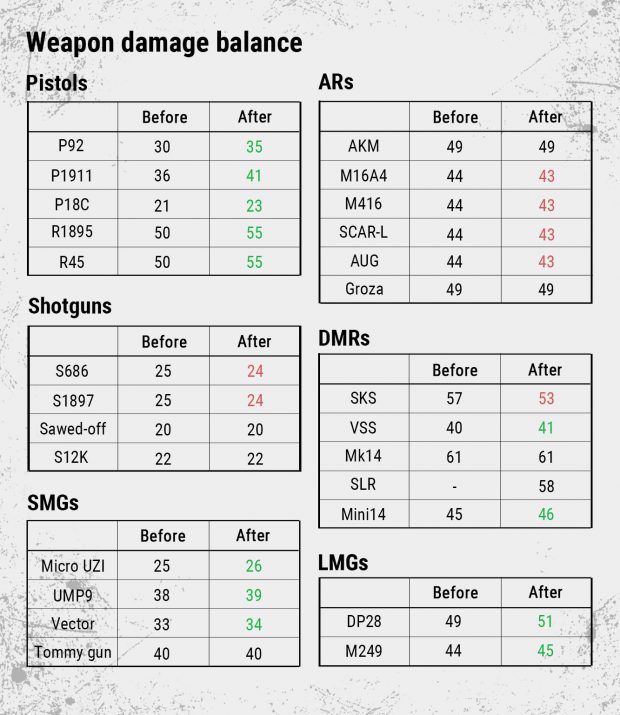 The Weapon Update Survey runs now through the morning of May 14th. You can only submit one entry, but that entry gets your name in the hat for the Participation Award. Plunkbat will be giving two early bird keys at random to 1,000 players globally, and will announce the results of the survey and a list of winners on Tuesday, May 22nd.

You can find the survey by clicking the link right here and you can play Plunkbat by finding it on Steam or every other platform known to man. Yes, the survey is a SurveyMonkey page for some reason? Don't be thrown by that; I'm sure it works just fine.