The Playerunknown's Battlegrounds servers will go down for maintenance tonight then return with a map selection option, a boss new muscle car, a big weapon rebalancing, a new rifle, loads of extra scopes and grips and bits, and other shiny newness. This is all in Update 12, the rad big patch which has been in testing for a week, see. What I've played on the test server has really excited me, so grand, let's go. Meet you outside El Pozo for muscle car races.

The server maintenance will begin on Thursday at 3am UK time (which is 7pm on Wednesday in the Pacific timezone, 10pm Eastern), developers PUBG Corp say, and should run for four hours. So we'll wake up to a shiny new update on Thursday morning, in time for a few rounds over breakfast.

Headline features! The long-awaited map select option is finally in, letting us skip maps we don't want to play. Obviously it's a simple choice right now, but when the third map arrives it'll let people select one, two, or all of 'em as they please. 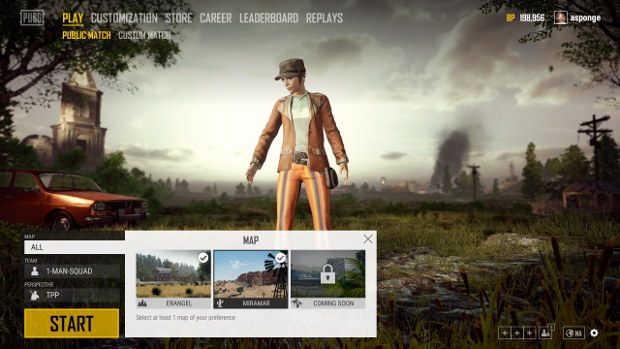 However, you might not want to skip Miramar, because it actually improves a fair bit in this update, between adding and removing loads of bits of cover where appropriate all over - not to mention the muscle cars. Oh! To mention the muscle cars: they are rad. Found only on Miramar, the Mirado is a four-seater found in some snazzy colours and with the top up or down, and it roars beautifully as it zooms along. I adore it. Especially the fluffy dice.

The update tweaks almost every weapon, making shotguns and SMGs better, making assault rifles less mighty at mega-long range, and broadly making more weapon choices more viable. I dig it. I've had some great fights on the test server. Weapons are also expanded with a new 3x scope, a 6x scope, three new grips, a new shotgun barrel attachment... many more things to collect and clip on. I was surprised by quite how many scopes I found, but it did mean our squads were always kitted out.

Ah, there's so much. Here are some of the big points from the patch notes:

See the Update 12 test patch notes for so much more. Good. It's a good update. It's a nice burst of freshness.