Codename: Savage, the new 4x4km map in development for Playerunknown's Battlegrounds, today is back in closed beta testing after handing out more keys over the weekend. Savage returns with several new areas, dynamic weather that continues to change throughout the round, and some interesting changes to the safe zone. Developers PUBG Corp say that Savage's blue ring of death can now "calculate and adjust its waiting time based on the number of players left alive," which I'd be interested to see them try on the regular maps too.

Back on the main client, the game this week will add a flight path map marker as well as new weapon skins - including for its iconic pan.

Savage returned to testing at 2am this morning, and this current phase will end at 2am on Thursday (which is Wednesday night in the Americas). The devs have closed the signups again but they have re-opened them mid-test before, so that might happen again.

It's still very much being shaped, adding three new notable locations to blank spaces in the world with this latest update. That's why it's not just in testing but closed testing. PUBG Corp say the map "won't be ready for a full release for a few more months. But in the meantime, we'll keep using these super short testing windows to drive development—we believe that working with players in an 'open development' process is the best way to make a map that players love."

You can see more of the changes in the latest Closed Experimental Server patch notes.

Before all that, 1.0 update #11 is on the test servers now then presumably will the main servers in a day or two.

The main practical feature is an indicator on the map showing the flight path of the plane, which is visible from the very start of the round in the waiting lobby. It'll be handy to discuss drops before even getting in the air, I suppose, given how easy it is to get lost in hen party banter and forget to plan.

The update will also whack in new weapon skins. The Equinox Crate, which requires a paid key to unlock, is being added to the pool you randomly receive when claiming a reward - with a 25% drop chance. Yup, it still sucks to get paid crates as random rewards. This crate packs silver and gold-plated guns, desert digital camo, and shark-mouthed paintjobs, plus has a chance to also get an incredibly fancy pan as a mega-rare bonus drop. The drop rates are so bad and the skins mostly so ugly that I can only imagine it matters to billionaires and big-shot Steam traders.

Worst of all, the Olive Branch skin has such a wobbly base that you shouldn't even use it to cook - you'd be begging for a fat fire:

Another pan skin will be far more accessible. The Target Practice skin paints a target on the bottom of the pan, a daring challenge to people trying to shoot you in the bum. It won't cost real money or be hidden in random crates, received simply by paying 5000 Battle Points. Each account can buy this only once. I much prefer this to the random loot box system. Pan's okay too: 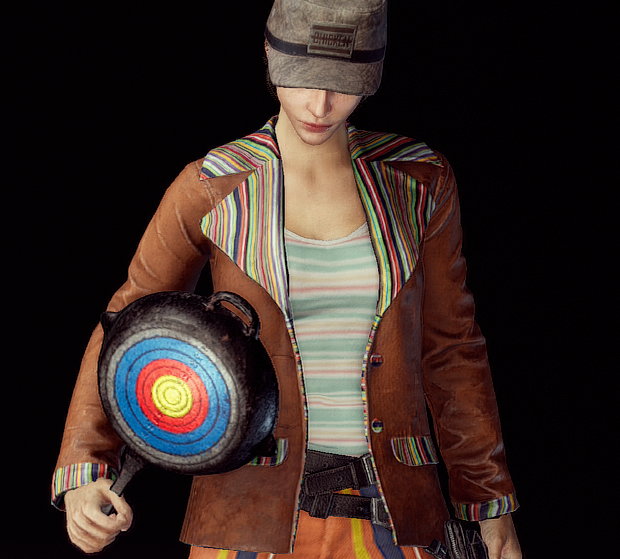