I threw a spear at the first person to harm an ant. They were warned. But the lag meant I kept missing and it just got a bit embarassing, so we retrieved the spears and went back to scouting for dewdrops.

Grounded's multiplayer has captured something special. Even after several hours (which flew by for all of us), we found it hard to pin down exactly what about it was so... likeable. In its current state of development, I can't quite recommend it as wholeheartedly as I want to. We had too many technical problems. But if it can overcome those during its early access period, it may well be game of the year material. 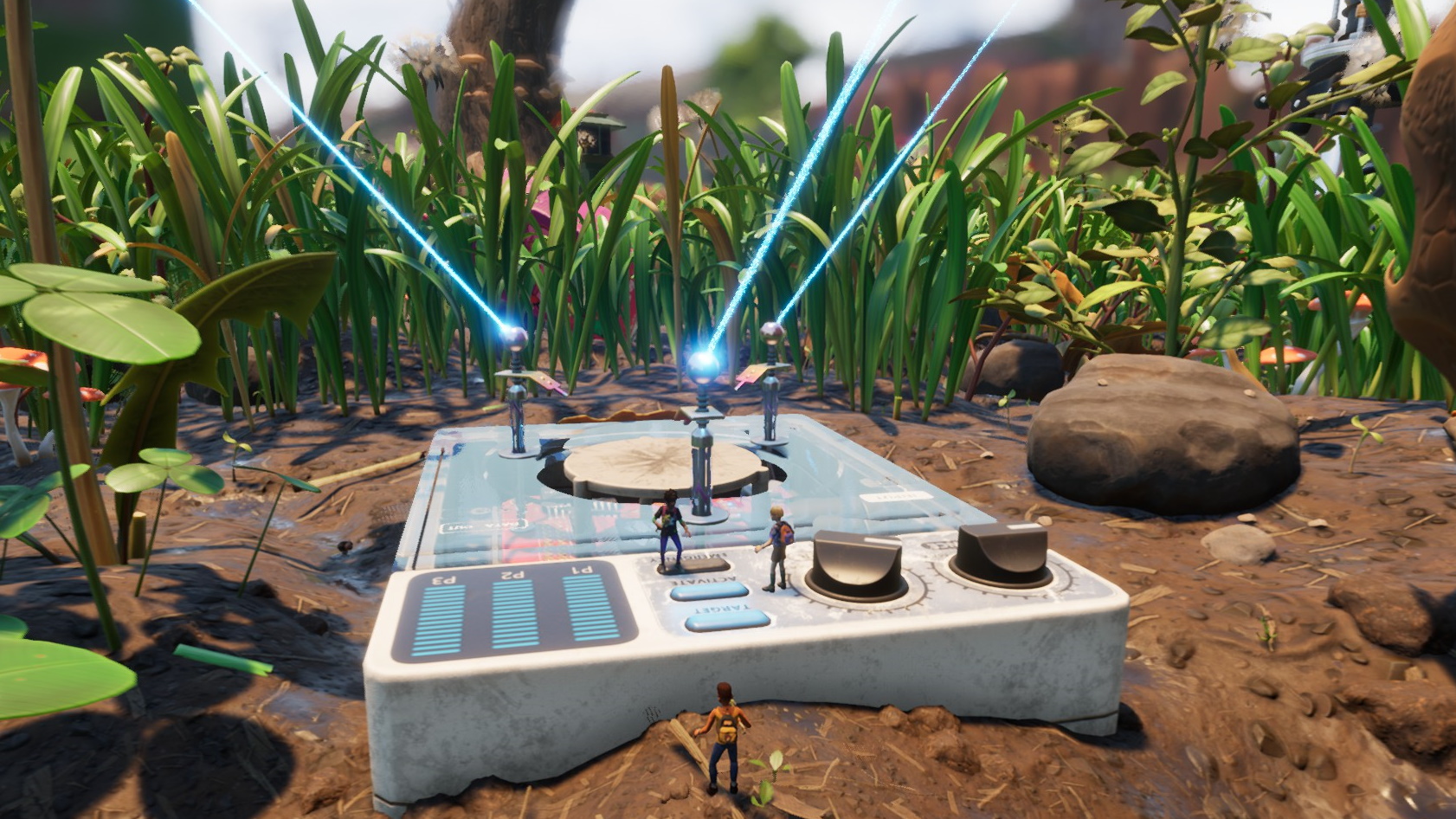 Let's get this out of the way: it has problems. Matt and I tried to play together and it took half an hour of faffing around before we gave up. Some of that is not Grounded's fault, in itself; much of the faffing came from the awkward way its multiplayer has been stapled to the Microsoft store. If you've bought it on Steam, this will never interfere with your single player business, but playing with friends requires logging into a Microsoft account, then awkwardly adding each other as friends on the Xbox software. You can do the former from within Grounded, but the latter means coming out and navigating the impressively terrible Xbox-whatever-they're-calling-it-this-week software, where clarity goes to die.

The good news, though, is twofold: first, once you've done all that and got back into the game, Grounded's co-op is quick and simple to set up. Second, cross-play with Xbox One users is seamless. The only time it became any kind of issue was when trying to explain the controls to someone who wasn't using a keyboard.

This was not the end of the technical troubles. Matt's game repeatedly crashed a minute or two in, and RPS contributor Craig Pearson wasn't able to play at all before crashing out. I also had frequent crashes during Grounded's Steam Games Fest demo, although since it entered early access it's been fine for me, so there have at least been some improvements. Nonetheless, with two out of seven of us unable to play full stop, two more getting occasional disconnections, and the rest of us suffering lag, it's difficult to recommend it without the disclaimer that it's currently a bit of a gamble.

HOWEVER. I'm banging on about all this instead of just ditching Grounded altogether because it's bloody excellent. I was joined by outgoing guides writer Dave Irwin, Joel Franey of USGamer, and Thomas who does nerding for EGX and MCM. And it's hard to tell who had the most fun.

The premise is that you're all kids who've been shrunk to the size of an estate agent's brain and abandoned in a large garden. Single and multiplayer modes are identical save for the number of you, and the amount of wildlife and water. Your goal is ostensibly to follow a short trail of clues to understand and fix the shrinking thing, but the other players raced through the currently existing story bits in about 20 minutes and it made little difference, because the bulk of the game is all about exploring, building, and having freeform adventures in its unique world.

There is a reward for reaching the current end of the story chain, but it was roundly ignored after a few minutes (someone even called it their least favourite part of the game, because it's just not as good as pottering in the garden). Instead, we just kind of did our own thing.

Grounded is intuitive enough that I was able to sit back and enjoy as everyone discovered the basics on their own. I don't think I've ever had so much fun playing a game I know well with people who are mostly new to it. I genuinely loved watching everyone go from platforming up to the precious dewdrops (sometimes possible) to chopping down the blades they're stuck to (overkill), to realising you can just whack them with a rock to get the water to fall. It surely helps that we're all experienced with games in general, but what little confusion and uncertainty we felt was resolved naturally.

Research and crafting recipes are shared, saving pointless busywork, as are storage boxes, blueprints, and really everything except the bag of stuff you drop when you die - which chides you with a "no stealing!" notice if you try, but becomes available to everyone if the owning player logs out. Although you can hurt each other the focus is very much on co-operation, and this just comes so naturally we didn't even need to plan.

Much like when Nate opened a Minecraft realm, there was no need for negotiation or careful organisation. The four of sort of self-organised, each exploring whatever took our fancy, poking at things and gathering the resources we were curious about, sometimes rushing off to help each other out or taking a while to loiter in the camp, cooking and tidying up and experimenting with building. Everyone was free to do their own thing, but we all gravitated towards helping each other out because it was convenient to do, and just seemed to fit.

It doesn't even try to match Minecraft's near infinite possibilities, of course. You can add walls, roofs, steps and lamps to the world but never change the terrain, and there's only the one map, although it has several distinct regions. But that's the game that came to mind, with (I think) Thomas even saying it's the only crafting/survival type game he's liked anywhere near as much.

I think it comes down to that nebulous "sense of place". The garden feels convincing, and familiar enough that you can easily get your conceptual bearings, while also being original enough to invite exploration, wonder, and joy in its simplest elements. The chopping of grass is delightful in itself, as your axe blows visibly chip away at the stalk until it slowly topples, then breaks into multiple planks on landing (which sometimes get stuck in the canopy and need to be retrieved by muggins here). You can then lug a stack of them on your shoulder, and hurl them for the hell of it.

I still delight in digging up and spearing grubs, partly for their useful hides but also for its own sake. There's a joy, absent from many survival games, in the basic acts. Cooking multiple chunks of insect meat over the fire, thumping the juice carton we camped under to get at its precious contents, even just equipping a torch and admiring the excellent lighting effects.

There are, sensibly, easier and harder modes, including a building-focused one without the constant threat of spider attacks. We eschewed the higher difficulty, on the grounds that in survival games this invariably just means more tedious faffing about repairing thing and eating an entire herd of buffalo every day. But with hindsight, I might actually like to play on a harder setting with more players. There is definitely more food and water spawned to compensate for the greater player count. Aphids were plentiful enough that I stopped bothering to hunt them, and even the mostly-neutral ants frequently appeared in packs of six or seven rather than the ones and twos I was used to. I am not 100% certain about the spiders, but I'm fairly sure there are more of them too, and they seem to be a bit tougher.

I was worried the mystery and wonder would be lost. The tone is naturally far less harrowing than single player, and with other people around I was far more reckless. We even stayed up for most of the nights, working and building and even exploring in the moonlight as Dave climbed atop a pebble and stood a noble torchlit lookout. We had endless faith in The Incline (a slope of maybe 25 degrees) to protect us from creatures known for their ability to scale vertical surfaces. I heard someone in trouble and ran into the night like a fool, evading a horrible spider death only because it saw someone else first. It's a lot less scary than on your own, and yet the threats were still threats. The unmistakable gasps and yelps needed no explanation after a while. Fear means spiders. Spiders mean fear. This is the way of the Garden. I was pleased to see that the common orb spiders remain tough and scary.

Dave was very much the professor out of Arachnophobia, strolling up to the deadly spider and being startled when it reacted poorly to his repeatedly plucking its web. A bold pioneer. A bold, dead pioneer. Our haphazard attempt to distract it so Dave could retrieve the stuff from his body was comically bad, as I caught its attention and ran off, assuming it would give chase. Instead, it attacked Joel, and when we flung a few spears at it, another one appeared to flank us. Clever girl. Being the more experienced player, I abandoned the pretence and ran away, screaming, but without my usual aphid shoes I was caught at our base and killed while an ant took the opportunity to waltz in and steal some food off the spit.

Everyone had a great time with Grounded, immediately, and throughout. The most subjective criticism some of us shared is that the absence of consequences for dying threatens to undermine its natural drama. In single player I don't respawn at all, and reload saves instead. That's not realistic in multiplayer (although there is an autosave function, so our host was able to get us back in when their connection dropped. It is imperfect and I lost the precious grubs I'd just caught, but it's a useful feature), and any change to it would be divisive, and depend enough on player preferences that the only realistic solution would probably be a custom difficulty setup.

There are a few glitches, too. Physics bugs popped up here and there, we'd sometimes see a floating, unusable item, and disconnects are sometimes followed by a frustrating inventory wipe. Obisdian are working on some of these issues, and as an early access title they are inevitable. It would be a truly catastrophic waste if these problems are not fixed at some point, because our main complaint is simply that we want more.

The curse of getting into a game this early is that you'll burn yourself out on it, and miss out on later additions. There's room here for more everything: more items, more areas, and of course more bugs and threats. Nature is rarely more fascinating and horrifying than when generating tiny creatures - I'd dread to imagine what a wasp attack would be like - and if anything the challenge might be knowing where to draw the line.

Obsidian have built a robust core, and even now with its limited inhabitants, it's an excellent place to enjoy with friends. The only real questions I have are whether they can iron out the minor glitches and major crashing issues in time to add the heaps of new things this garden deserves.