If you click on a link and make a purchase we may receive a small commission. Read our editorial policy.
Hades review
Supergiant's action roguelike was already a game of the year contender when it first came out in early access two years ago. It definitely is one now.

Hot god encyclopaedia by way of hack ‘n’ slash roguelike Hades was basically already game of the year when it released into early access in 2018. Its core components were all in place. You fight through a constantly randomised hell filled with monsters and bosses as Zagreus, sarcastic and perpetually titty-out son of Hades. Along the way, you can pick up abilities bestowed by gods from across the Greek pantheon. And it’s all set to an obviously perfect Darren Korb soundtrack.

Since then, an absolute laundry list of new stuff has been added, but the core has remained the same. Zagreus tears through several layers of his father’s kingdom, wielding one of several weapons (in one of several ‘forms’) that invite distinct approaches to wreaking havoc. Personally, I like to switch my brain off and whale on enemies with the sword or the fists, but I hear there are more subtle approaches that make better use of Zag’s full suite of abilities, dashing and casting and special attacking just so, like someone sophisticated. Whatever floats your boat.

Regardless, Zagreus will always meet his grizzly end in one way or another and be escorted back home by the Styx. His pockets will be full of pilfered goods, though, and he can purchase upgrades for his skills and weapons that will come in handy next time, alongside the run-specific upgrades received from Zeus and pals. Also, he can redecorate the house, and let me tell you, my room looks fabulous now.

With so many upgrade options, any approach is viable. You might spend one run absolutely maxing out the bow’s damage per shot thanks to Artemis’s crit-boosting boons. After that you might focus on crowd control, pushing and pulling hell’s citizens exactly where you want them with the help of Poseidon’s tides. The next you might build a massively overpowered grenade launcher. Since you can’t control what’s on offer, experimentation is practically mandatory and will lead to many weird and wonderful combinations.

To shake things up even more, Supergiant’s clever difficulty modifiers are back in the form of the Pact of Punishment, a whole host of options like more enemies and alternate boss forms that Zagreus can choose to toggle up for greater rewards. Conversely, a more forgiving mode will boost your damage resistance on every consecutive failed run until it hits just the right spot.

All of this is super, and the game certainly wouldn’t work if each run wasn’t so varied and yet consistently great. But where it excels is the bits in between, after Zag’s taken a nasty tumble and before he leaps out of the window for another go. Each cycle, there’s a chance to get to know some of the pantheon a bit better. The Olympian gods themselves are mostly out of reach, appearing only to give themed blessings that affect a single run, so you can’t do much more with Zeus than accept the ability to call down lightning for a while. But the House of Hades is full of other characters that – ironically – bring the whole place to life. 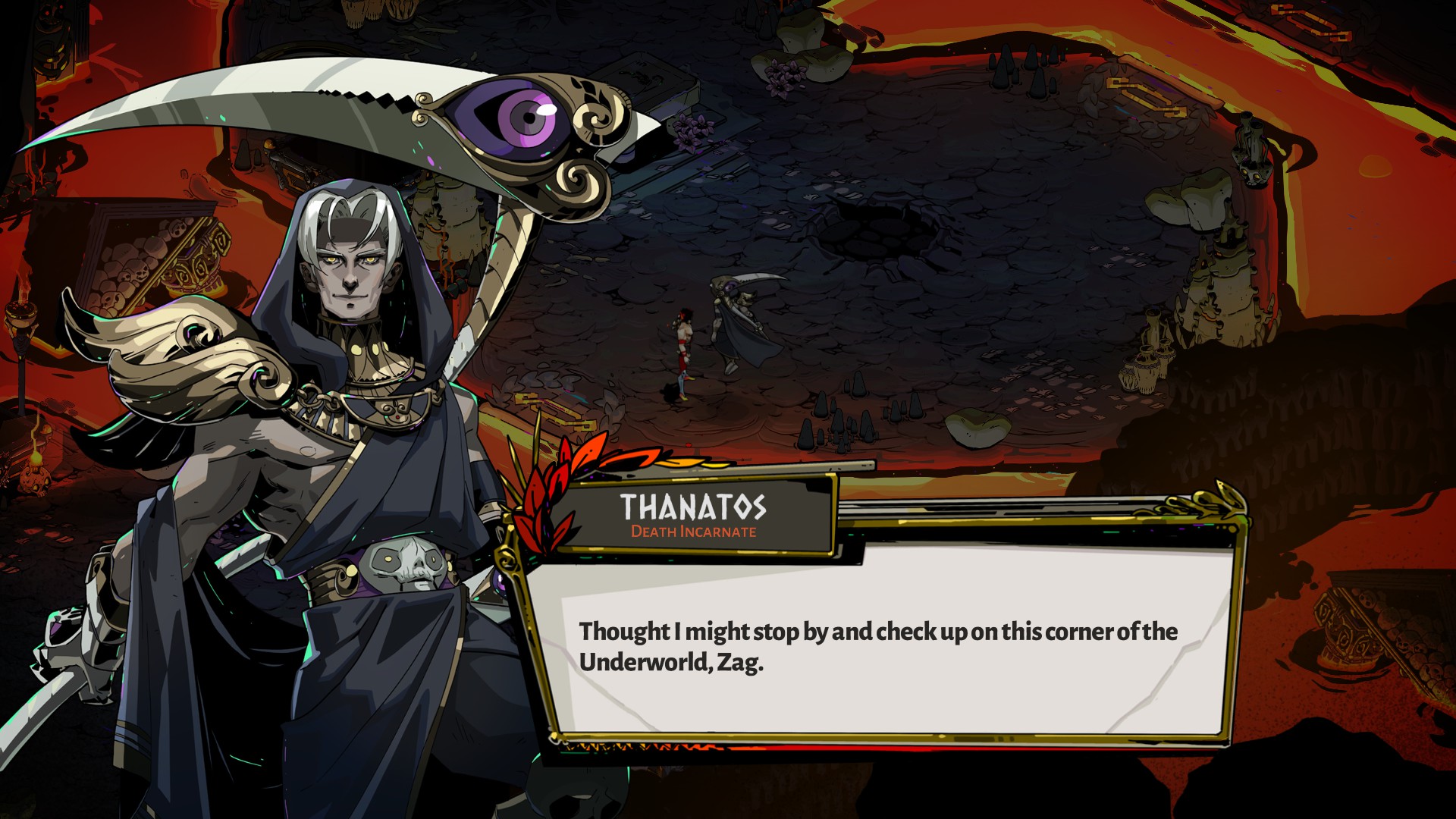 There are dozens of substories for the residents of the palace, each fantastically written and voice acted. And whether its flirting with the god of death or helping to reunite lost lovers, there’s always something to progress, even if you’re not getting any closer to escaping. And that does more than just encourage another run. It makes the game about fighting pessimism, expanding it beyond just Zagreus’s tenacity in his doomed escape plan to encompass all his friends' woes, too. Supergiant takes all the tragedies of its source material and introduces a forgotten character who just might be able to help set them right again.

That’s what drove me to put a hundred hours into Hades before its latest and final update. But, true to form, the 1.0 release comes with a boatload of new things. As well as yet more music (still just so good) and new ways to fight, I had to play another medium-sized game’s worth to progress the main story to credits. And then there’s more!

Hades’ structure has lent itself brilliantly to accepting all this new material with every update, whether it be new characters or weapons or enemies or whatever else. Its randomisation and the care taken to tie everything back to existing content means they always slot in neatly, as if they were there all along. Having said that, I’m curious as to how all this content is going to be paced for the player who has been waiting for Hades to be finished before leaping into hell. It seems to me that the best way to play the game was in early access, coming back with each update so that it could spool out across two years. Though I suppose it’s a little late to say that. 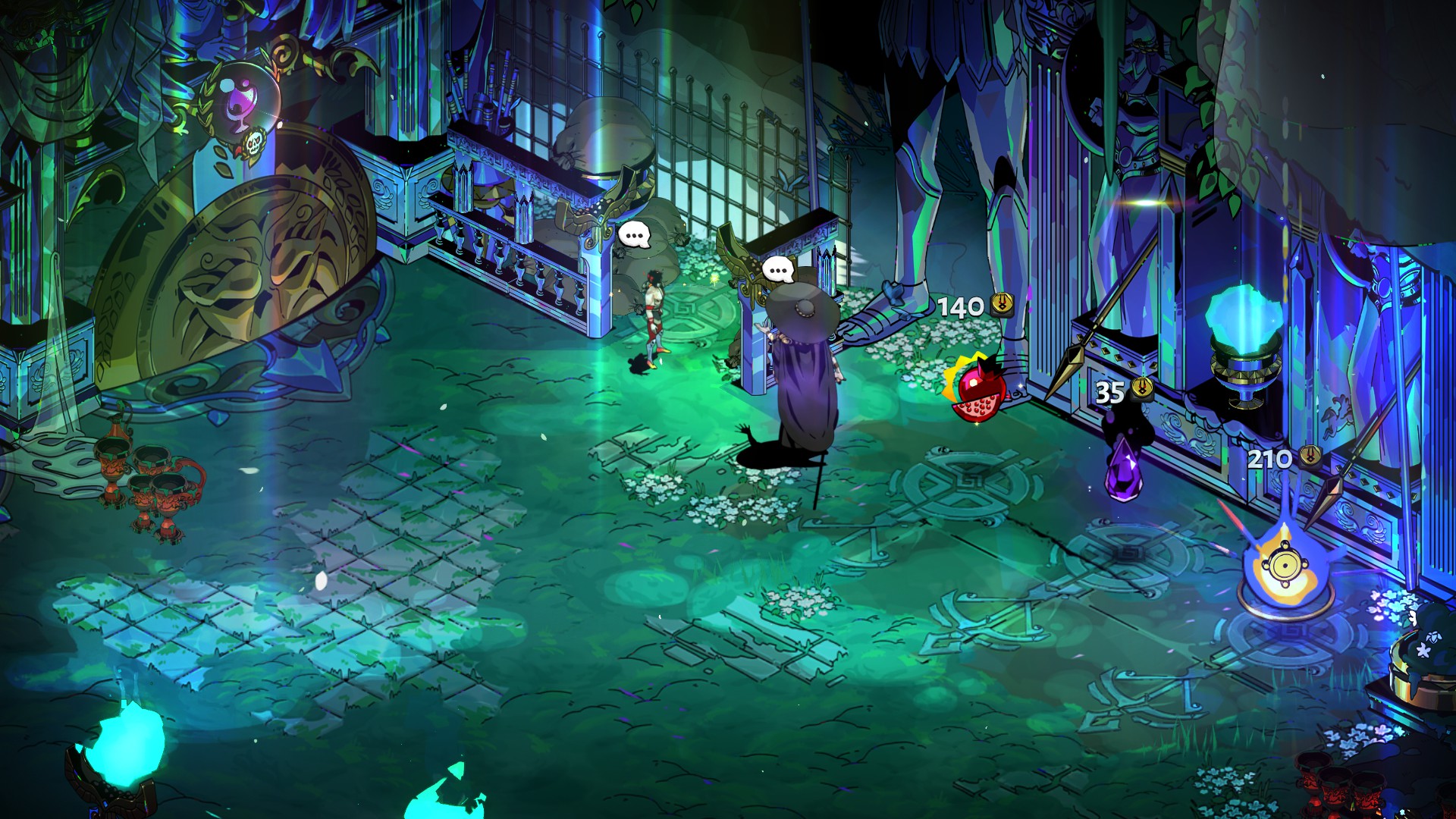 It also lends a twin struggle to the main story’s ending. Two years of personal investment is a heavy weight for a game to carry as it emerges out of early access. At times, the final chapters of Zagreus’s tale felt almost self-conscious of that, as if it was aware it had limited time left.

Despite that, it easily carried itself on the strength of its emotional impact. Which is great, for me. But I’m curious as to whether newer players will have the time to build up the investment necessary for it to lean on that before they’re thrown into the end game. It seems difficult to pace a story that will unfold radically differently for so many. Not only are players jumping in now getting a very different approach to Hades’ plot, so too does it depend on how good players are and therefore how quickly they progress through the various layers of hell.

I can’t answer these questions. Even if I began a new save file, I wouldn’t be able to erase my previous experiences. And for me, Hades been a constant companion for almost two years. I’ve gone back to it any time there’s been an update or I’ve just gotten bored with what else is on offer. It’s been a game I’ve loved writing about dozens of times and one I’ve talked drunk about in bars. I have friends who can be reliably expected to send me fanart when it crosses their attention, and I do the same in return. I hope Hades will land on its feet for new players, and I mostly think it will. But it’s already been special.