Hand of Fate 2, that weird, brilliant blend of solitaire deck-building RPG, roguelike and hack n' slash action game has been improving steadily since launch. Free new characters, mod support and now an endless challenge mode with global leaderboards. Can you hear the heart of the cards? Well, you shouldn't, that's another game entirely, but this is a great reason to come back and ask The Dealer for a fresh hand.

While Hand of Fate 2 was already a significantly higher-budget game than the original, I'm surprised at how much love and effort they've poured into the sequel's Endless Mode. Rather than just being a single straightforward challenge, they've given a separate leaderboard for each partner character you can team up with, which means that everyone worth half a damn is going to be competing to get the Dealer as far as possible. I mean, who else would you take? 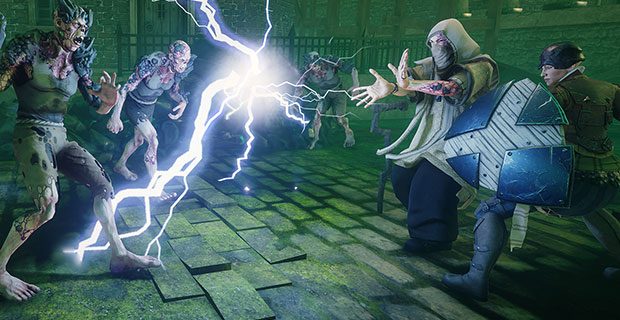 The main force working against the player in Endless Mode is entropy. Not only will unlucky cards and failing events cost you essential inventory items, but general wear and tear will gradually strip you of your most treasured gear, with armor only being able to soak a fixed number of hits before turning to dust. Combine that with ever-increasing odds against you (including some utterly absurd looking fights later on with combined groups of highly synergized enemies) and you've got a fun way to lose an afternoon.

The new mode has also been accompanied by 50 new shard tokens. Collecting them will unlock even more goodies to add to the mix, including new artefacts, encounters, loadouts and customization options. The developers are kind enough to warn players that this will set you back achievement-wise, with earned collection-based achievements needing to be re-earned, and those still walking that long road will find themselves a little longer still to walk.

They even promise that Endless Mode is designed to be future-proof, and will grow along with any official expansions or updates released in future, although to the best of my knowledge, none has been announced quite yet. The Endless Mode update is out now for both Steam and GOG versions of the game.