Welcome to Spawn Point, where we take something wonderful from the world of gaming and explain what it is, why it’s worth your time and how to get involved. This time: collectible card games (or at least, the videogame kind).

Hello, I would like to collect some cards please. Of course, friend. We have a wide variety of fantasy themed cards, ranging from hostile dragon to raving ghoul to –

Hang on, what are these numbers? Oh, ignore those, they’re nothing to worry about. Look at this wizard!

He’s covered in flipping numbers! All right, I’ll be honest. The numbers are what make the game work. Collectible card games are often simply battles between “health points” and “attacking power”. Broadly speaking, they are games in which each player takes turns laying down cards depicting monsters, heroes, animals, demons, gods, soldiers – all sorts of colourful pictures – and those cards will attack the cards of your opponent. The numbers generally just decide who wins. Dwarf or dragon.

I’ve changed my mind. Numbers are crap. Wait, wait! Yes, CCGs are awash in arithmetic. But don’t let that put you off, many of them do the maths for you. And behind these bouts of small, flashing numbers, lies a deeper strategic level of thinking, a realm of foresight and psychology, knowledge and luck. With practice, you don’t even see the numbers. The genre is also a blossoming valley, there’s so much to choose from. You could play Faeria or Shadowverse or – 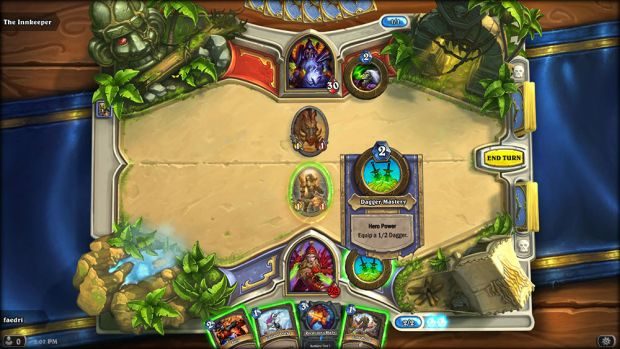 Or Hearthstone? NO. No. You’ve come at this all wrong, friend. Yes, the free-to-play Hearthstone is the biggest flower in this meadow, and it’s the framework many of these games seek to emulate (although, if we want to get technical, it’s actually Magic: The Gathering that laid the foundations for –

Just you close those brackets RIGHT DOWN. Sorry).

So where should I start? Gwent.

I'd rather avoid Wales, thanks. No. GWENT. The Witcher Card Game. 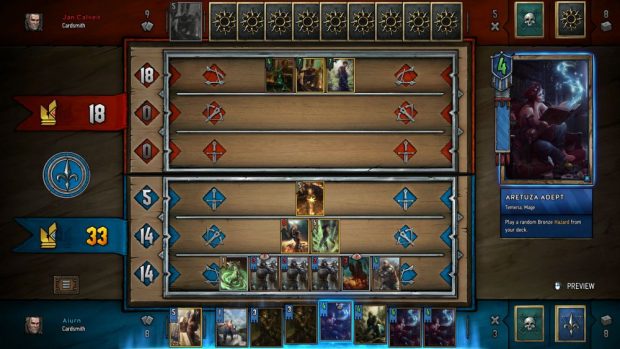 Oh, like Gerald plays! Uh, yes, that’s right. It’s one of the more straightforward card games in the genre. You’re not bashing cards together, like in Hearthstone. You’re just trying to get a bigger number than your opponent. Every card, whether it's a siege engine or a swamp hag, has a number. You win the round if you’ve got a higher total than your foe.

That’s easy. Give it here. Hey, not so fast, Grabby McGee. That was just the first round. There’s two more to go. And can’t you see your opponent is bluffing?

No they aren’t. They are. Because Gwent is also a game about patience and misdirection. About making it look like you have absolutely no frost giants left, when actually you've got LOADS. But we've seen through their trick. Let's play some soldiers, and when the frost giants come out, we can -- oh no.

They've set everything on fire. Yes. They have.

Just throw down more cards. Higher numbers, innit. Oh, so now you’re a mathematician. The problem with Gwent is that you can over-play your hand. Sometimes, your opponent will “pass” and intentionally lose a round, just to keep more cards in their hand for later. Big, nasty cards, like high-numbered, gold-encrusted cards, or a decoy card that sneakily undoes their last turn, or weather effects like a snap frost that saps the health of your own cards. What’s more, you each have three rows to place your cards, and picking where you’ll throw your hideous Drowner can be just as important as its number. 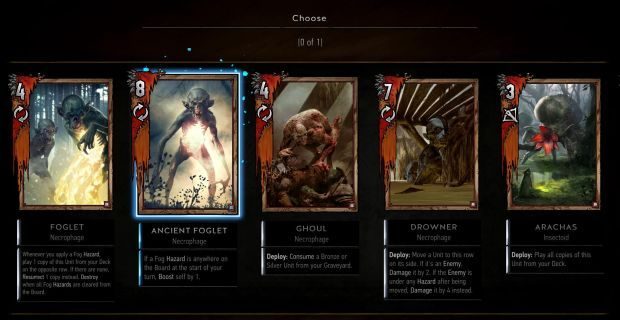 So it isn’t so easy after all. I said it was straightforward, not easy. Your goal is clear, and a good tutorial and single-player missions means Gwent is simple to learn. It also doesn’t have the bloat of Hearthstone. But it’s still a mind game between two cardthinkers. A psychological battlefield. But with Foglets.

Hang on, "bloat"? Hearthstone has been around for aaaages. Thanks to expansion packs, there are currently ninety-million-gazillion cards. Which can be overwhelming to a newcomer. Gwent is still young at the time of writing, so it doesn’t have such a massive library to learn.

Okay, but what if I just play Hearthstone? You know what, that’s fine. The studio that makes it, Blizzard, are good at designing a strong, capable card game. It’s fine.

You don’t sound convinced. It’s just that... well, have you heard of Duelyst? 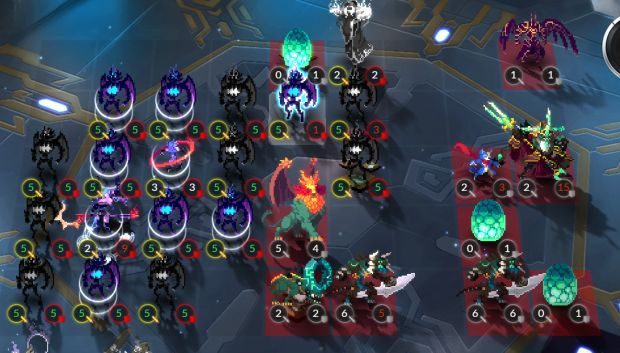 For the sake of this article, let’s say I haven’t. It’s gooood. It has the same “number combat” as Hearthstone and others, but it’s also played on a grid. Your minions move around the battlefield, one or two squares at a time. Little angry imps, or speedy hyena beasts, or hulking mechs. You win if you take out the enemy general – a card with high health, who’s also moving around on the field of battle. And each general has a special ability they can use every few turns, as they skitter about fighting for control of the board. A lot of strategy games try to evoke the monster chess from Star Wars. But Duelyst really does manage it.

Sounds good. But I hate to see stuff moving. What?

I just don’t like it when things move. It’s why I’m getting into cards. Uh, okay. Well, let’s look at some more alternatives that add a little flavour to Hearthstone’s vanilla battling. 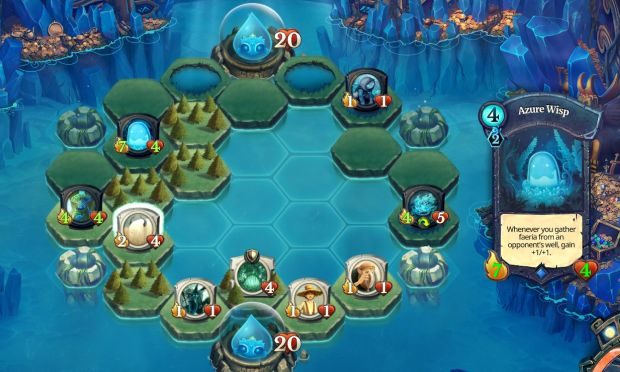 Lay it on me. Faeria (above) has the elemental mix-and-matching of Magic: The Gathering but is played on a hexagonal board that builds as you go along. It’s clever and methodical, but it does sometimes suffer pacing issues. You can get entrenched in a losing battle for far longer than you’d like.

Soz. There are others. The Elder Scrolls: Legends is a tie-in to Bethesda's fantasy worlds that looks like an unimaginative barnacle clinging to the great Blizzard whale. However, look closer and there's a lot to praise. You’re still trying to deplete the health of a central orb belonging to the player. But this time there are two “lanes”, which means you’re essentially playing two games of Hearthstone at the same time. This means some decks, like those made of shadowy lizard assassins, are experts at swapping positions or manipulating your opponent’s most valued swordsmen. It’s a very competent alternative. 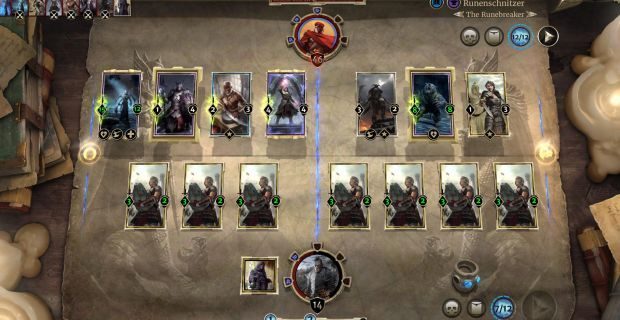 It sounds complicated. I haven’t told you about Artifact yet.

That's too many Hearthstones. Maybe not - I’m being facetious. Artifact is Valve’s new collectible card game based on the heroes and creeps of Dota 2. Here, there are three lanes, and if your heroes are killed they'll simply respawn after a few turns. Just like in Dota. Sadly, you can’t play it. It’s not out yet.

Sounds too fighty anyway. Is there anything less… combative? Sorrrrtaaaa. Your normal CCG omelette tends to come with free-to-play multiplayer marzipan cooked in.

That is disgusting. Yes. But there are some single player alternatives that don’t fit the mould, but which you might like. Regency Solitaire is solitaire in a petticoat. The Hand of Fate games are part card game, part third-person dungeon crawler. And Slay the Spire is a masterful roguelike with surreal monstrosities and on-the-hoof deckbuilding. It’s fantastic. I like CCGs, but I think Slay the Spire is better-crafted than any I’ve mentioned so far. So take that praise with you to the Steam store.

I don’t do digital. WHAT.

I only play with real cards. Are none of these games real? You are killing me.

I want a real game. Should I play Magic: The Gath-- No. Play Netrunner. 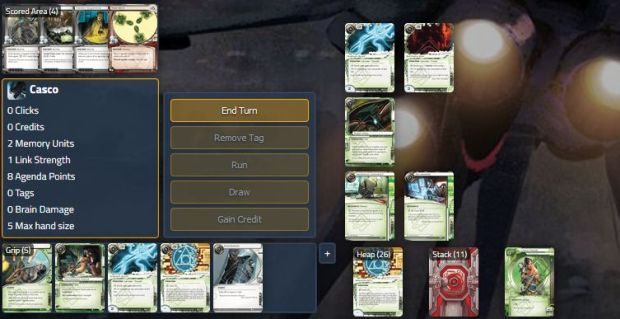 What’s Netrunner? It’s a great cyberpunk card game that is just screaming for a digital adaptation, but I’d need a whole other Spawn Point to explain it. So just ask around. I’m sure you’ll find something on the net.

Right, here's what worries me: I'm going to have to get deep into one of these aren't I? I'm gonna have to get sickening deep. Not at all. You might find yourself sucked in, as I did for 122 hours of Duelyst-ing. But you might also just enjoy a handful of games each night for a few weeks, before letting it slide, like I did with Gwent. And that's fine! These are all free-to-play, so you don't have much to lose by trying them. Although it also means they come fully loaded with loot crates, fiddly fictional currencies, and all the other tricks to make you pour out your wallet. As ever, be aware that paying for barrels full of cards might get you a better monster to unleash, but it won't necessarily make you a better player.

All right, I've decided to play after all. Which one?

All of them. Where are they? Ah. This is the annoying bit. CCGs like to run on their own clients. Gwent goes through GOG. Hearthstone needs Battle.net. The Elder Scrolls Legends uses the Bethesda launcher but you can also get it on Steam, just like Faeria, Duelyst and others.