A ghost set me on fire. Earlier, I was beating on a parasite that was hiding inside a metal shell. I found a gelatinous cube that had absorbed so much junk it had become sluggish and bloated. I reached inside it, lost a layer of skin on my hand, but retrieved an ice cream. Don't laugh. It's a very useful ice cream.

I'm playing roguelike card game Slay The Spire, and I've fought through packs of cultists, slavers and thieves, but now I'm on fire and I can't do a great deal about it. I burn whenever I breathe. It seems unfair but this is partly a hell of my own making.

Slay The Spire had me at 'hello'. Visually, it's like Darkest Dungeon by way of Dead Cells and Dark Souls rather than gothic horror, and I could spend a whole day enthusing about its bestiary. In many RPGs you'll earn some stripes killing rats. Here, the rats are already dead, then flipped upside down, teetering along on green appendages bursting through their flesh. The parasite that they're hosting is the enemy; the rat is a vehicle. 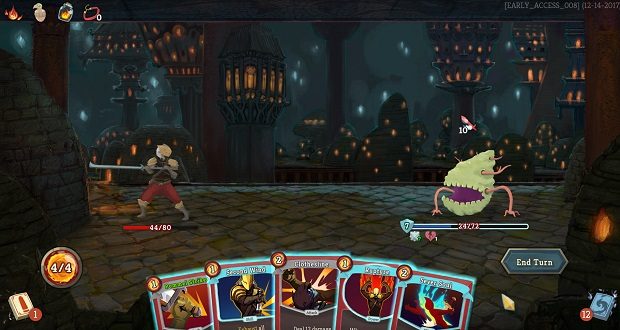 The reason it's my favourite card-based game in ages though has nothing to do with the setting or the art. It's because it's the first I've played in ages that actually makes me care about deck-building.

I swore off Hearthstone the minute I realised how much time I could end up devoting to customising my decks. My enjoyment of card duelling games is in making best use of what comes into my hand rather than trying to engineer the perfect deck so that I can be sure I'll have the best chance of winning. I want to think on my feet, in the moment, rather than tinkering and planning and preparing before the battle has even begun. 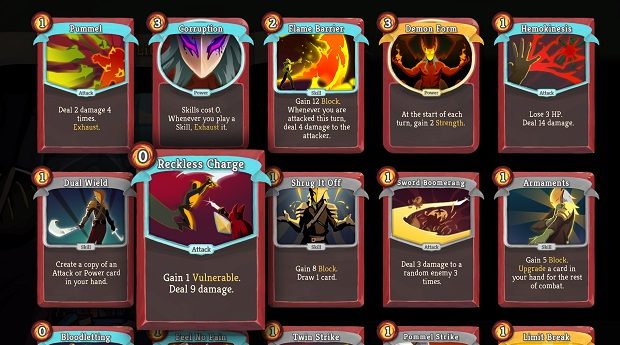 Whether you think of that as a love of improvisation, a total lack of engagement with the metagame, or bone-idleness, I have no argument with you. But it's the way I roll and I didn't think it'd change because I usually find that creating decks feels like a separate part of the game, tucked away in a different part of the main menu.

Slay the Spire forces you to build as you go, making every card stripped from your deck a very deliberate and difficult choice. You start with the basics, allowed to make some minor modifications by sacrificing cash or health for a bonus card at the beginning of a run, and you earn new abilities by killing enemies. The map is randomly generated each time and it's a simple series of nodes along paths that sometimes intersect. Some nodes have fights, others have mysterious multiple-choice encounters, treasures, merchants or campsites. 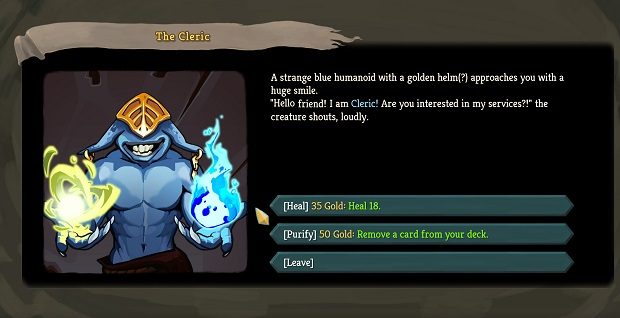 Killing an enemy gets you a new card and maybe a potion and some cash. The card is the important thing. You can pick from one of three and essentially, you're levelling up, gaining new abilities and adding to your repertoire. I've had characters that are all muscle, adding cards that rely on hands that are permanently coiled into fists; all striking, no defense. Others have relied on attrition, cowering behind defenses and letting the little drops of poison administered via a few swift cuts do their work.

The problem is, as you add cards your character becomes a bit vague and while you'll probably want to keep some low-cost starter cards, you'll definitely want to ditch some of the chaff as you progress. To do that, you're going to have to spend cash to have a merchant extract the cards from your deck. And that's the trick – by making the removal of cards as expensive, if not more so, than the addition of cards, Slay the Spire has me hooked. 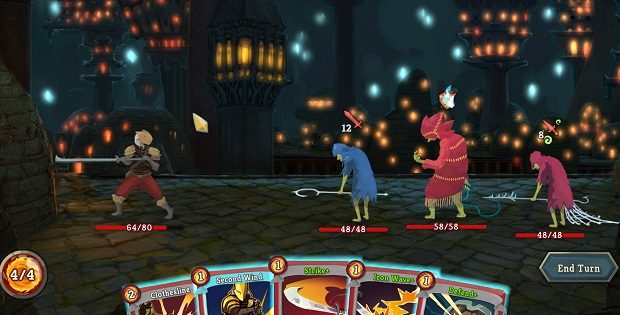 Every aspect of my deck involves difficult decisions now and that leads me to experimenting with incredibly small decks that barely leave me with space for a discard pile before cards are recycled back into my hand. That can work and there are relics, which act as modifiers altering the fundamental rules of combat and exploration. Finding a specific relic is a bit like finding a rotten tooth or distended organ in The Binding of Isaac; it can change the way you think about what you really need from your current build.

During my first few runs, I just accrued as much stuff as possible until my character became cumbersome, loaded down with contradictory cards and claptrap. It wasn't until that ghost set me on fire that I learned the error of my ways.

There are cards that actively hinder you, including curses and wounds. Some are permanent parts of your deck, others last for a single combat. The ghost's sick burns only lasted for a single combat, but they caused my deck to swell in size, buckling under all that burned flesh. Every time I drew a new hand, it'd be full of blisters and blood. Useless to me.

And then I realised that even without the scorched skin, my hands had become useless anyway. Too many cards with no real purpose and no attempt to create a character.

It's short-form, each run taking less than an hour in my experience, but Slay The Spire feels like a proper RPG. I guess roguelikes often are short-form RPGs and this is a very good roguelike that happens to involve cards in a very clever way.

Now, with the new knowledge forged in those fires, I strategise and build for the future, however brief it might be. I ain't afraid of no ghost. But I am afraid of the really angry, giant knight champion who keeps going into a wild fury and pummelling me into dust. I'll figure it out though because I'm going to stick with this one for a long time.

Slay the Spire is currently in Early Access and is available via Steam for £11.99. It supports Windows, Mac and Linux.