Back before Rome became the big boss of the Mediterranean civilizations, it was just one of many cities on the Italian peninsula, distinguished primarily by being founded by a murderer with a taste for dog milk.

It’s this early phase in Rome’s existence that’s the setting for The Creative Assembly’s new Total War: Rome II DLC, Rise of the Republic. The £12 pack whisks players back to 399 BC, plonks them into the sandals of its first politicians, and asks them to guide the nascent city to control all of Italy (and small bits of north Africa) on a shrunk-down version of the standard grand campaign map.

Winning the game is dependent on control of the entire region. Or, you can crush Rome into the ground and build an empire with one of eight other factions, messing up the primary school education of kids everywhere in the process. As a brand new republic, playing as Rome gave me fun political crises to chart my way through, but these other early cities have their own fancies and foibles. The Samnites live in the bit around modern-day Naples, and can magic up an army at the drop of a toga thanks to their religiousness. Taras, on the other hand, prefers science to religion and players can harness the brainpower of philosophers to boost their research speed. 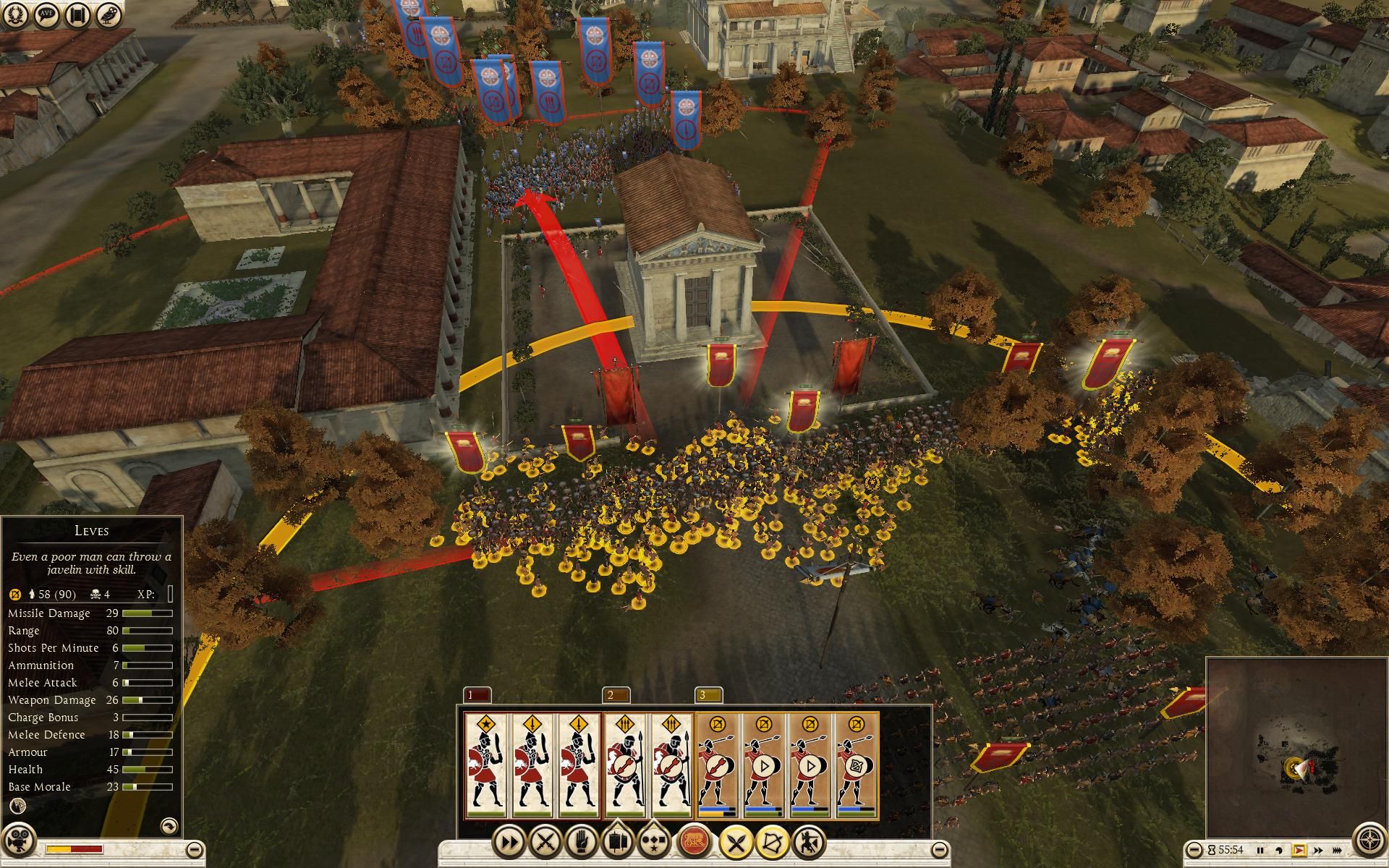 These varying factions are new additions to Rome II, but they’re certainly not the only update the game has received since its launch in 2013. The Creative Assembly has stuffed their game with a continent’s worth of playable factions in the years since release, offering some in chunky campaign packs like Rise of the Republic, some (like Greek States Athens and Sparta) in paid-for culture packs, and a few (like Armenia, Getae, and Massilia) for free.

There’s distinct variation in how each of these factions plays: in their unique units, their starting position, their rivals, their objectives, and even the time they existed. Rome’s first few years are rocky, for example, beset on most sides by other cities and tribes that aren’t keen on an expansionist upstart ruled (in part) by the unwashed masses. Step into the city ruler’s sandals 300 years later, though, and Rome is poised to become the European powerhouse it was in real life. The druid-fancying Insubres, on the other hand, have an easier start but will take longer to convince the rest of the Latin, Greek, and Italic cultures on the peninsula that menhirs and moustaches are the way to go.

There's a big difference between a power like Rome and the wild barbarians of the north, the Greeks of Athens and Epirus, or pirate raiders like those from Tylis. Rome II offered an array of challenges and playstyles at launch, and that list has only gotten longer since, allowing for two campaigns to start off satisfyingly different in tone, expectations, and approach. There are even appreciably different visions of poster boy Rome: the free Imperator Augustus campaign pack splits the empire into three after Julius Caesar’s death, letting players pick Octavian’s classic Rome, Lepidus’ Iberian-centred bit, or Antony’s Greek’n’Turkish portion of the empire. 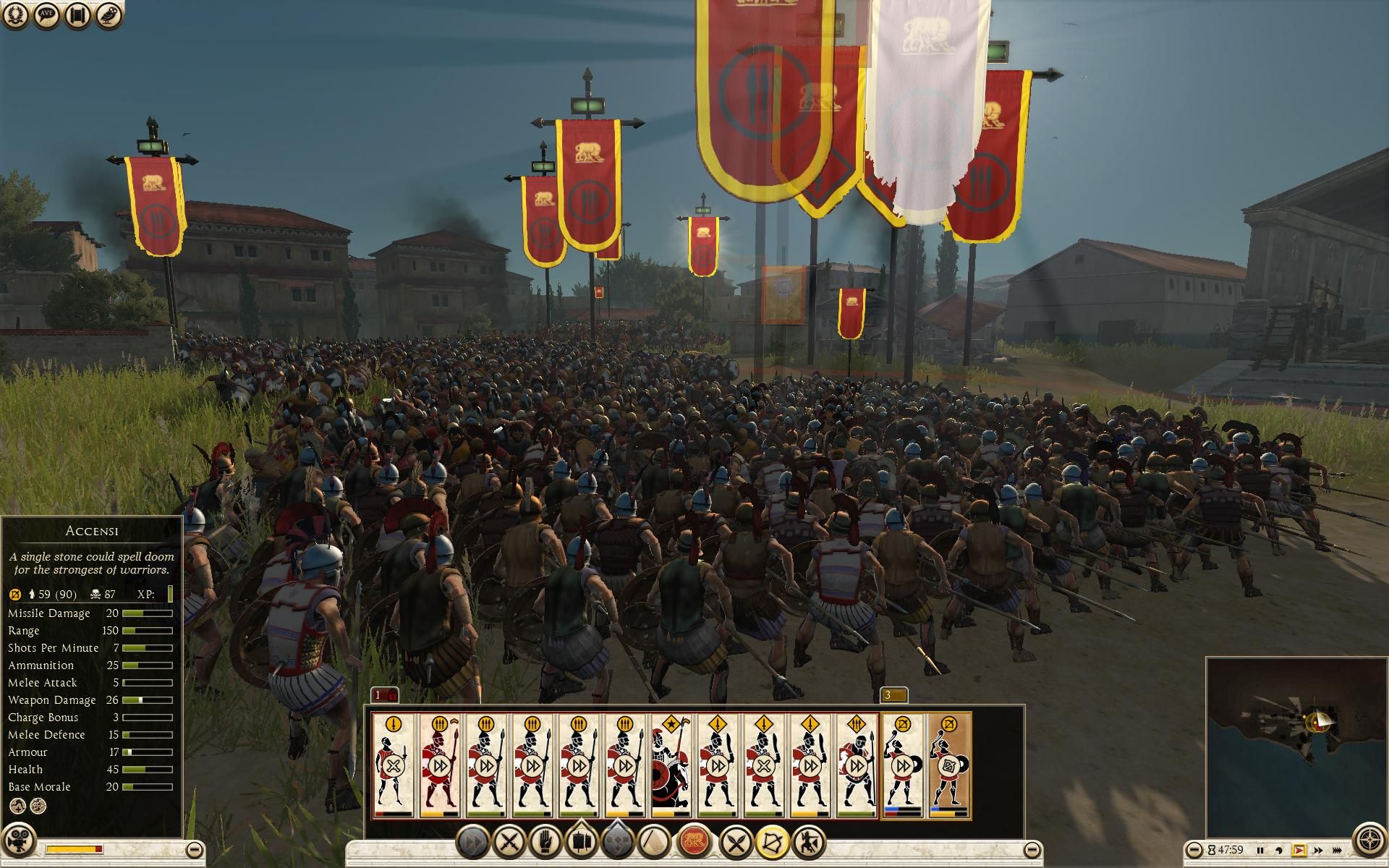 Coming back to Rome II after a few years away, though, I was more interested in Rise of the Republic’s challenge to build Rome from nothing. As with modern British democracy, playing as ancient Rome means balancing the wills of the plebs against the demands of the sneering hereditary elite, and as with modern British democracy, I found it was the latter that had the actual power. When the plebs kicked off, I could placate them with bread and circuses; when the patricians got upset, they attempted to secede from my imperfect union, spawning army stacks and stealing cities from my growing Roman empire.

The new DLC takes advantage of Rome II’s overhauled political system, but it also adds a new feature: family trees. These trees produce individual characters over time, each with their own traits, skills, and “intrigues.” These intrigues are mini-missions that can be used to curry favour with rival houses, provoke problematic peers, or boost your own skillset through things like marriage, bribery, or humanitarian visits to far-flung provinces. Playing as Rome, I controlled the scion of house Furia, securing the favour of the two other biggest voting blocs in the Republic in part by showering them with favours.

Not that I really needed to. The new family tree system was a neat way to connect me with the world and ground me as a powerful politician, rather than an omnipotent floating mouse cursor, but the truth was that I didn’t really need to engage that much with it. While I had to smack down a few secessionists in the early game, through either luck or process of elimination I ended up sharing power with two other noble houses who entirely approved of my actions and who made no moves to depose me. I may not have had the most influence in the Senate — giving me slightly smaller bonuses to development — but my Republic was totally stable, and my rivals were happy to keep its borders expanding. 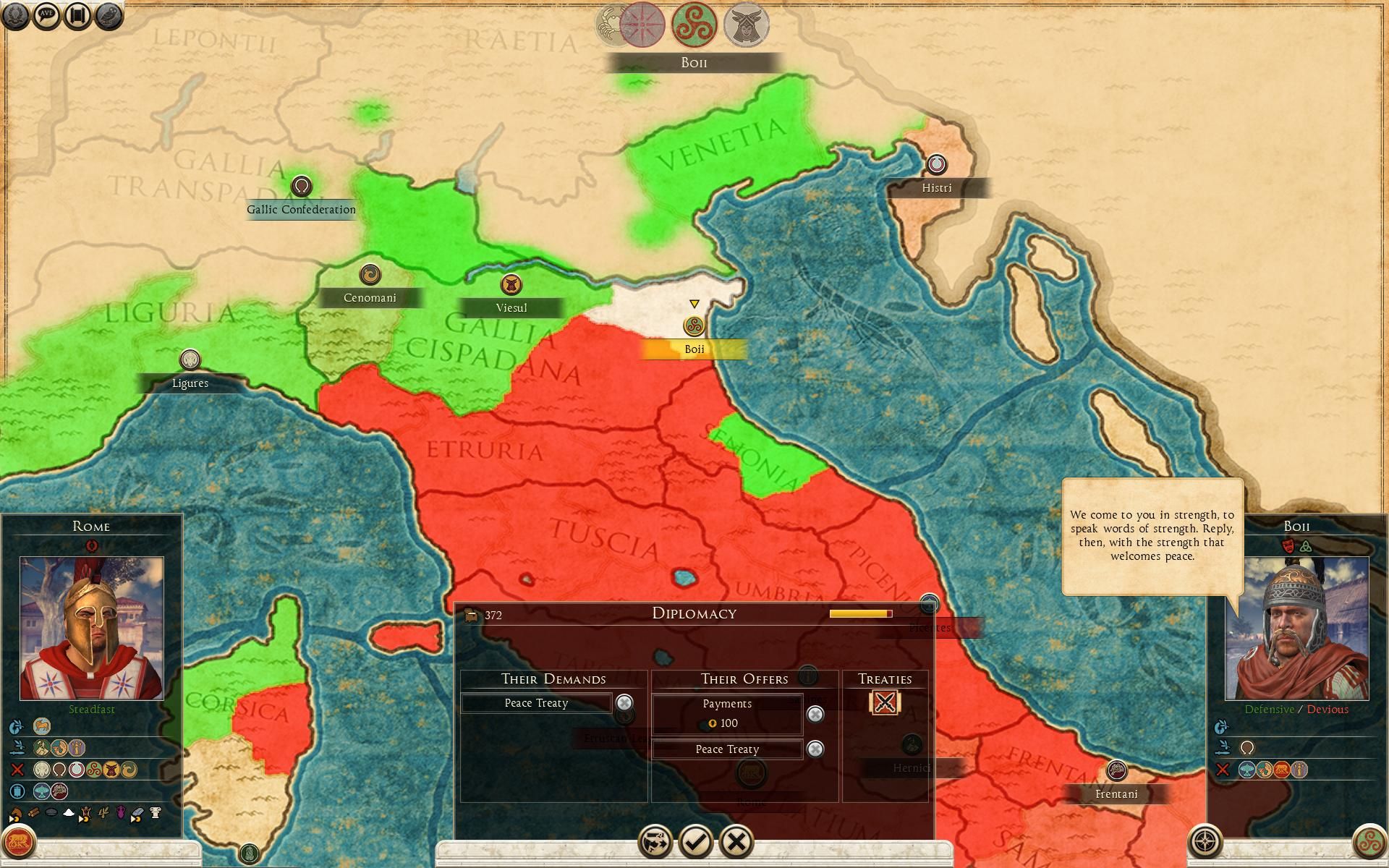 No, indolence was more of a threat to my burgeoning empire than active intrigue. Despite its various overhauls, Rome II still starts to slow down significantly in the later stages of a campaign. It’s a problem in all aspects of the game, from the drudgery of moving larger and larger armies around, to mopping up tiny factions, to fending off suicidal rebels. The once-careful apportion of skill points to a network of spies, generals, champions, and politicians becomes boring busywork, and the time between turns increases hugely as more of the map is uncovered and AI enemies wage war against each other.

For me this frustration built over time toward the same end. No matter how different and how exciting a faction’s early- and mid-game is, its end-game still becomes a tiresome exercise in tidying up, generals forced to play genocidal Whack-a-Mole with straggler civilizations and pop-up barbarians appearing in hard-to-reach corners of your empire. Even in Rise of the Republic, with its diddy-sized Italy-only map, I spent 20 grinding years wiping out Gallic armies in the frozen north of my empire, wasting turn after turn trying to chase Asterix and Obelix around alpine forests.

Harder difficulties require more interaction with Rome II’s expanded and clockwork-esque systems of interlocking parts: a game where every ounce of influence, gravitas, food, and public order can matter. The kind of people that can track all of those elements across huge empires should probably be running real countries, though, such is the amount of information they’ve got to keep in their minds. It’s also not clear exactly how your reactions to the game’s situations really make a difference at first, though due to the small selection on offer, you’ll find out soon enough. I got informed that I had been spurned from a banquet so many times in one campaign that I started to think my guy must’ve been the smelly senator in class. 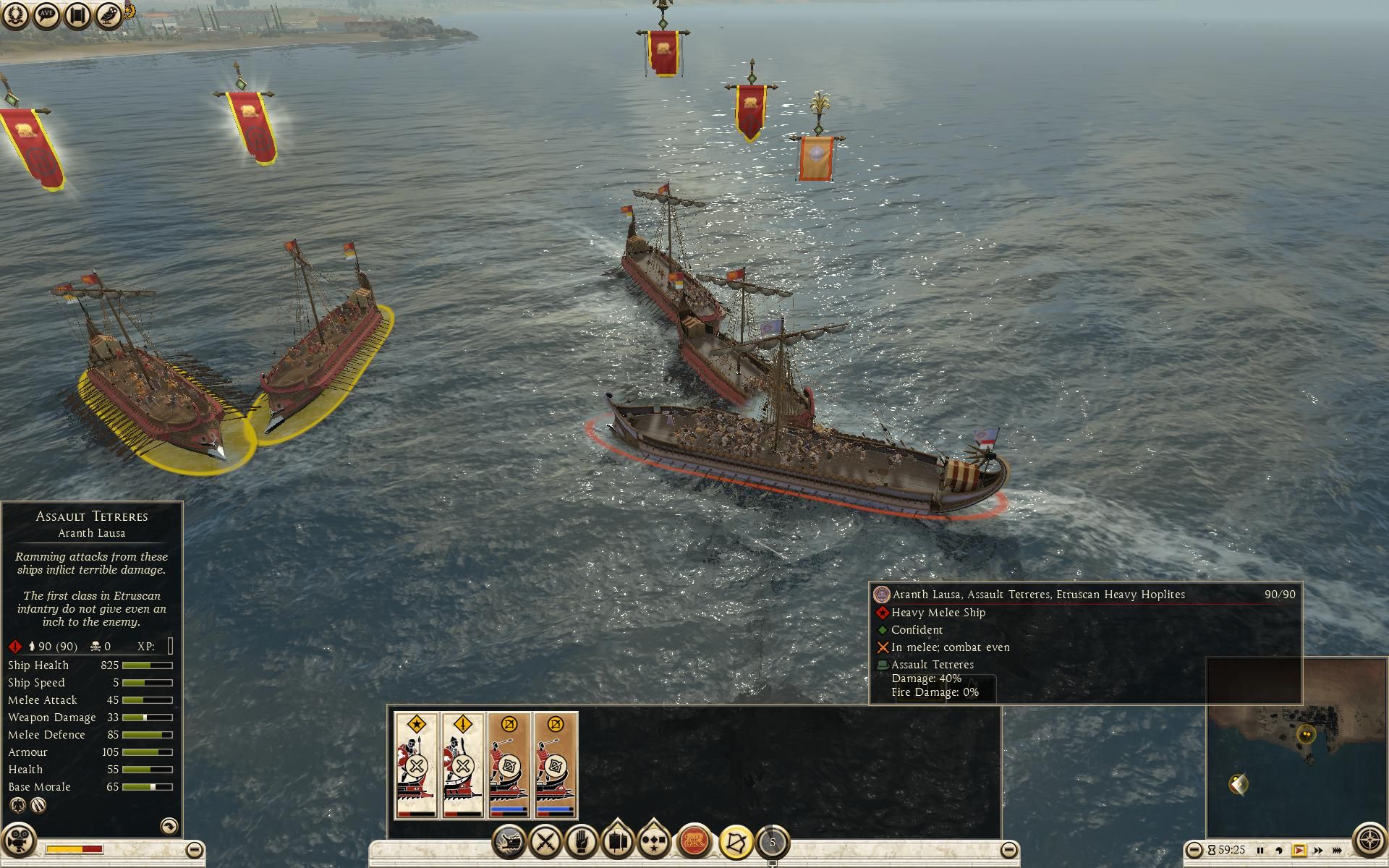 Rise of the Republic may have an older vision of Rome, but it’s a spruced-up game from its original incarnation. CA adapted quickly to complaints about the vanilla game’s AI, releasing a patched-up version a year later that they subtitled the Emperor's Edition. More modern tweaks have come with subsequent DLC packs, adapting enemy behaviour both on and off the field of battle. I certainly felt like I was fighting against devious rivals most of the time, but that’s not to say that Rome II’s AI is completely immune to stupidity

I almost lost an otherwise-even city fight when half of my force couldn’t work out how to park their boats on land. Watching them oscillate between two perfectly viable jetties while their friends got royally Caesared a few hundred feet away was minutes of groaning frustration. Similarly, cities in general seemed like a problem for my friends and foes alike, their tight quarters causing enemy troops to stand off for no reason and my guys to walk up to ramparts and just… stand there. We get it, guys, it wasn’t too long ago you were wandering around forests with your wolf mum, but ladders and doors are not that complicated. 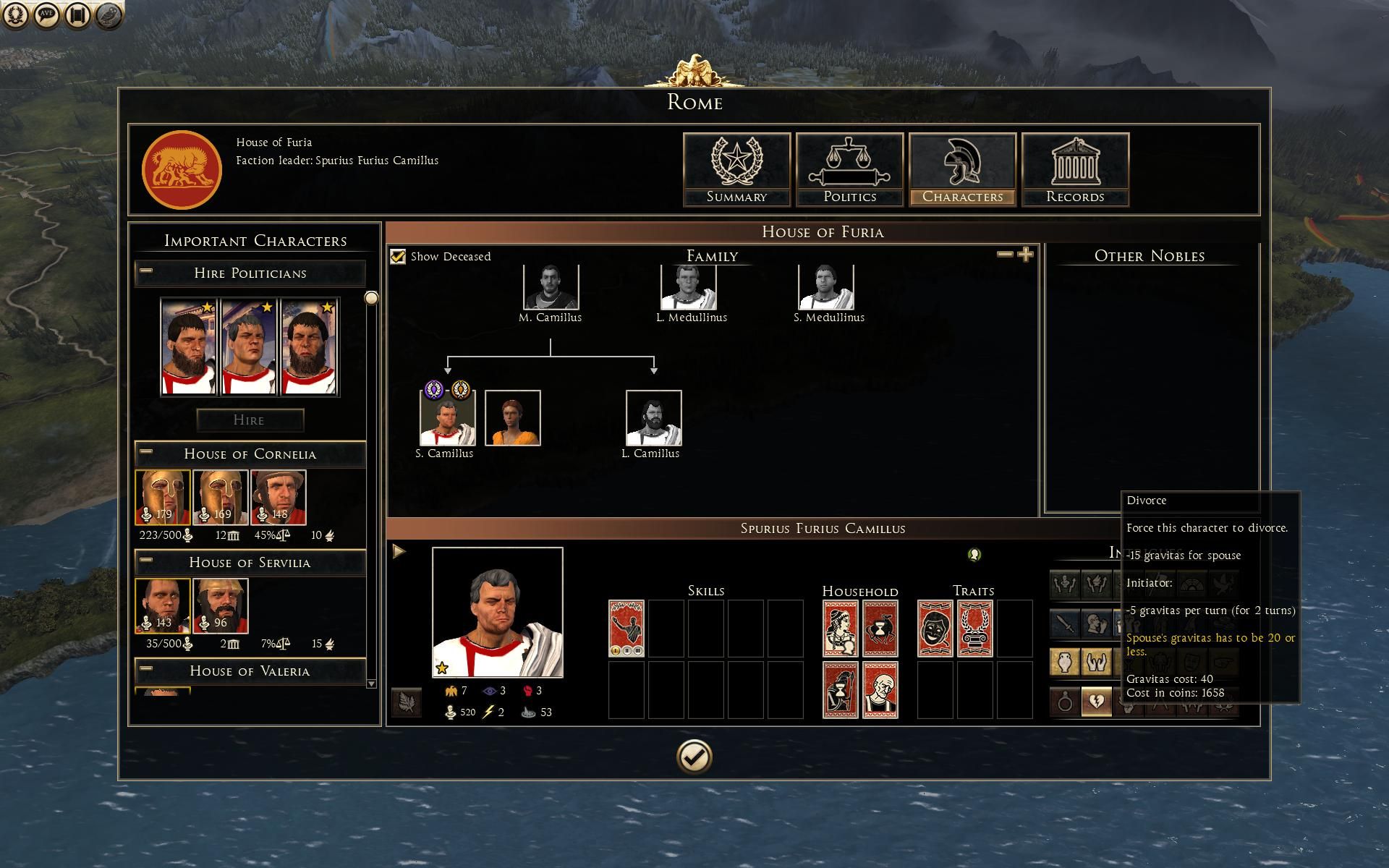 But most of the time, Rome II’s battles lend themselves well to spectacle. That’s especially true after its latest graphical update, which makes it look almost as spiffy as a strategy game released in the second half of the 2010s. New lighting effects make soldiers stand out and water sparkle, and even the campaign map looks nicer — although the low-level clouds that drift across the zoomed-out view are an unnecessary annoyance. It's on this campaign map that I spent most of my time in the game, auto-resolving most battles once my armies had superiority over my rivals', but I still engaged in the odd battlefield fight as a palate cleanser. The rock-paper-scissors interaction of spear, sword, and cavalry troops is easy to understand in this early timeframe — certainly much simpler than Total War: Warhammer's fantastical equivalents.

Its grand campaign still suffers from the aimlessness that has plagued Total War’s late-game since time immemorial, but the wealth of campaign packs now available for Rome II do at least offer neater and more manageable goals for desk chair generals. Total War: Warhammer has it beaten into a wizard’s hat in terms of scale and silliness, and it still has a tendency to turn into a genocidal grind, but Rome II is in a much more stable state than it was at launch. That makes it well worth a visit if you want your grand strategy with more Gauls than goblins.