I hadn’t, until this week. You may now judge me. Done? OK. When people ask the doomed question “what is the best Final Fantasy”, all the memes will rally to the side of Zidane and his troupe of actor-rogues. And that’s a lot of fun, because in wider gaming circles (ie. those who only dip into JRPGs, as opposed to being fans) it isn’t as well-known as its older brethren, or its newer, flashier siblings. But… maybe… maybe the memes are right?

I’m hoping to find out. I’ve only just escaped the “Evil Forest”, so I assume I still have fifteen discs to get through. But the fairytale world and to-the-point dialogue is exactly what I’d been craving the previous few days. It’s likely I’ll tap out after a few more hours, frustrated by a party wipe or some impossible-to-find piece of blurry scenery. But let’s see. Let’s see. I never did complete Final Fantasy VIII, and that has always haunted me. I don’t want another skeleton in my vidgam closet. 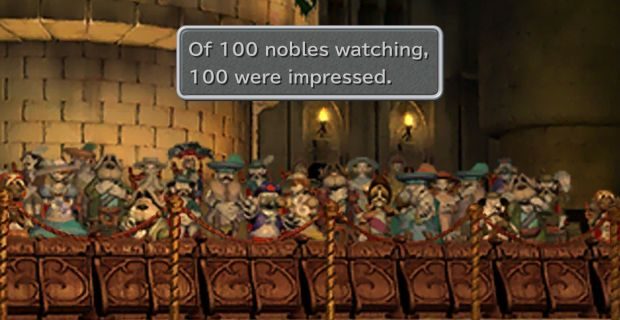 Going back makes me think about Final Fantasy as a series. There’s something robust and unstoppable about it, the game that was likely to be Square's dying breath (or so the disproven legend goes) has given rise to a series that feels immortal. And while it isn’t exactly “fresh” every time, there is enough variety and evolution to keep people coming back. FFIX was the last of its particular polygonal era, so I feel like I owe it to myself to finally catch up.