Each week on a Friday, RPS news priestess Alice O descends from her mountaintop fortress-monastery to pose the rest of us a single question: What are we all playing this weekend?. A simple ask, you might think. A nice way of sharing what we're enjoying with each other and our readers. Not to me. In recent months, I've come to dread this question, as it's always the prompt for a bout of frantic stress. "Oh crikey," I'll say, all breezy and optimistic. "I've heard good things about Dukes of Manglebum - might give that a go. Or maybe the new Bungletech expansion, since they've finally fixed the bungling mechanic".

Yeah, right. Sure I will. I might as well be Gollum, claiming his favourite item of jewellery is "a watch". Because I know, just like everyone else knows, that when the working day is over, I'll caper back to my dingy games hole and continue to croon over the Precious. Or rather, the Preciouses. Because despite my every effort to snap out of it, I've been stuck for months playing the same two games over and over again: Age Of Empires 2, and to a lesser extent, Hearthstone.

I know, it's absurd. And believe me, I know there are other games out there. I have lost count of how many people have rhapsodised Hades to me, for example, or suggested I might like to join them for a spot of Apelegs. On our pre-Christmas podcast, Matthew kindly prescribed me a dose of Desperados III, like a gentle dad trying to cajole a fussy kid into trying peas. I'd love to play some Desperados. There are so many games I'd like to play, at least in theory. And yet somehow, even in the interminable depths of this pandemic, where every night is a night in, I'm squandering all my time on knights and inns.

Strange, really, as I didn't think I was the sort of person to assign much value to the comfort of the familiar. I've barely ever read the same book twice. Even with my very favourites, once is enough, and it's broadly the same with films as well (except Lord Of The Rings, which has taken on a sort of ritual significance in the last few years).

I suppose games, or at least these games in particular, are a different sort of animal. I don't talk about "playing" Age Of Empires 2, like I'd talk about playing a big old game with a story. I talk about "having a bit of" Age Of Empires 2, like you might have a bit of cheese. Sure, an individual game will have its rhythm, with a beginning, a middle and a castle drop, et cetera. And it'll have its own standout moments, too. If every match played exactly the same, after all, it wouldn't be much fun.

But the general package of brain chemicals released will be the same each time, and almost always better than the ones floating around in my brain before I boot it up. Same with Hearthstone, although with a bit more roaring "oh fuck off" when faced with yet another drubbing by whichever KeRr-AzEe card combo happens to be being done to death at the time. 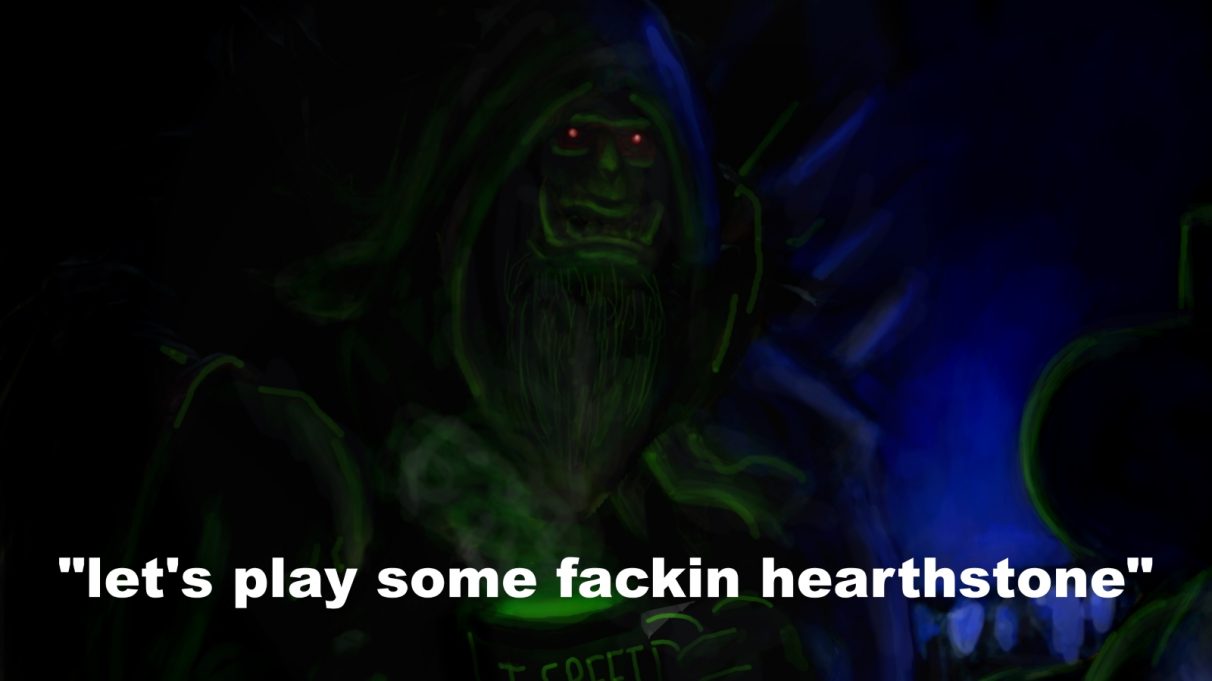 Even if I'm 90% sure I'll like a new game, I'm 100% sure I'll enjoy one of these two old bruisers. And for whatever reason, my head is in a state where such a small difference is enough to keep it tucked into the big, cowardly tortoise shell of habit. So many times, I've brought up the Steam window ready to charge headlong into a brand new world, only for my cursor to trudge, donkey-like, back towards those old, familiar icons on my desktop. The shame is always so quickly drowned by the dreadul, faux-scots roar of the Innkeeper, after all.

Mostly, this is a confession, and a cry for help. But I suppose there's a legitimate bit of criticism in here, too. Because if there is a tangible thought I can identify from that near-reflexive moment of "nah, won't bother", it's the dread of training wheels. Tutorials. Long, unskippable periods of clicking through dialogue, under portraits of characters you've got no reason to give a shit about yet. First levels where you have to kill a single goblin, after doing loads of walking about. Pressing C to crouch, before never crouching again. Having to sneak past a single goblin, to learn what stealth is. Long-winded explanations of armour systems that I blatantly won't absorb anything from.

I know that some games do brilliantly at either racing through this stuff, or playing it in such an original way that it's fun in itself. But the thing is, I never know which games they're going to be. And when I know that in less than a minute, I can be slamming my way through the opening stages of a perfectly executed Scout Rush, or a snowballing pirate-themed Battlegrounds run, I'm happy to compromise novelty for the sake of the dependable.