Ian Hitman will be get a summer job robbing a bank, in autumn stop by a prison for a spot of sniping, then put his feet up with a visit to a holiday resort, developers IO Interactive revealed today. They've laid out their rough plans for the next few seasons of Hitman 2, see, both those paid expansions and the freebies coming for everyone. A holiday resort sounds such a rich opportunity for manhitting, a classic murder mystery location where everyone can pretend to be someone else but only the elite have the guts to choke out a stranger then squeeze into their Speedo.

Summer will bring The Bank, a new sandbox location for sneak-o-murder. I trust that it will be an unusual bank, with all sorts of things to poke at and surely at least one opportunity for robbery? Two new special assignments are coming in summer too.

Across autumn, Ian will stop by The Prison in Sniper mode then hit The Resort for freeform murder. That's what really has my interest. Real-world resorts are such prime murderspots.

Resorts are places where guests want to completely let their guard down and forget their cares. They're places were people will happily accept a uranium-yellow drink brought to their sun lounger by a stranger in a staff uniform, and they'll actually consider it a bonus if the drink spits and smokes as long as they don't notice it's eating through the glass. They'll casually ride vehicles and machines they'd otherwise never go near, trusting that these jetskis and mechanical bulls must be safe or they wouldn't be allowed. They're unreal places outside the normal rules of guests' lives, and for staff... hell, I'd be willing to help Ian murder any particular troublesome guests. He'll need plenty of sunscreen on that dome, mind.

Across the coming seasons, free additions will include more maps adding Ghost mode support, new weapons and outfits, and other bits and pieces. 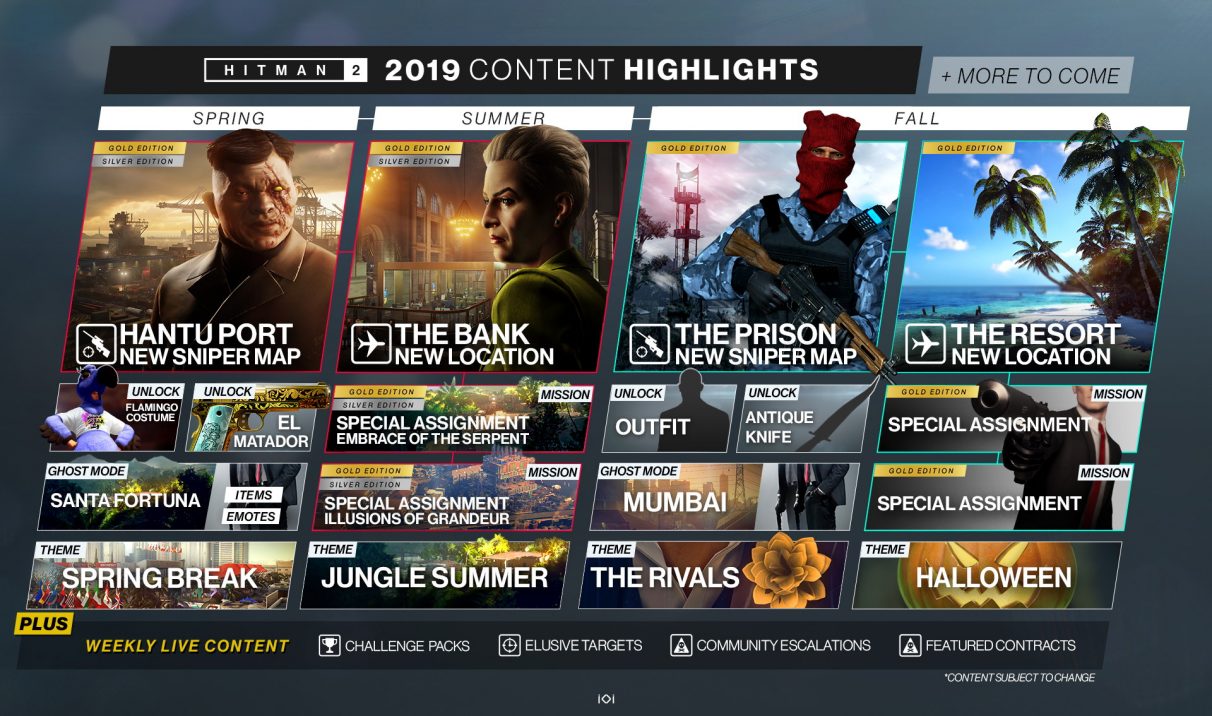 The Bank will be included with Hitman 2's Silver Edition, which has already received the Hantu Port level for Sniper mode. For the Prison and Resort, you'll need the Gold Edition or full £33 DLC season pass (I assume they'll be sold separately for Silver folk too).