The busy streets of Mumbai are the perfect place for an assassin like Agent 47 to slip through unnoticed and eliminate his targets unseen. There’s three of them in this stage too – sleazy gangster Dawood Rangan, self-appointed Queen of the Slums Vanya Shah and mysterious gang lead The Maelstrom – so he’ll seriously have his work cut out for him.

Nevertheless, I’m here to offer a helping hand to both you and 47 to make sure you nail the perfect run with this Mumbai Silent Assassin walkthrough. Beginners should head to our Hitman 2 guide hub for more general tips and links to the previous missions. First time in Mumbai? Our more general Mumbai guide might be the better place to start. This walkthrough assumes you’re playing Mumbai from the original starting location with no concealed weapons, but some coins and any of the game’s other basic items. 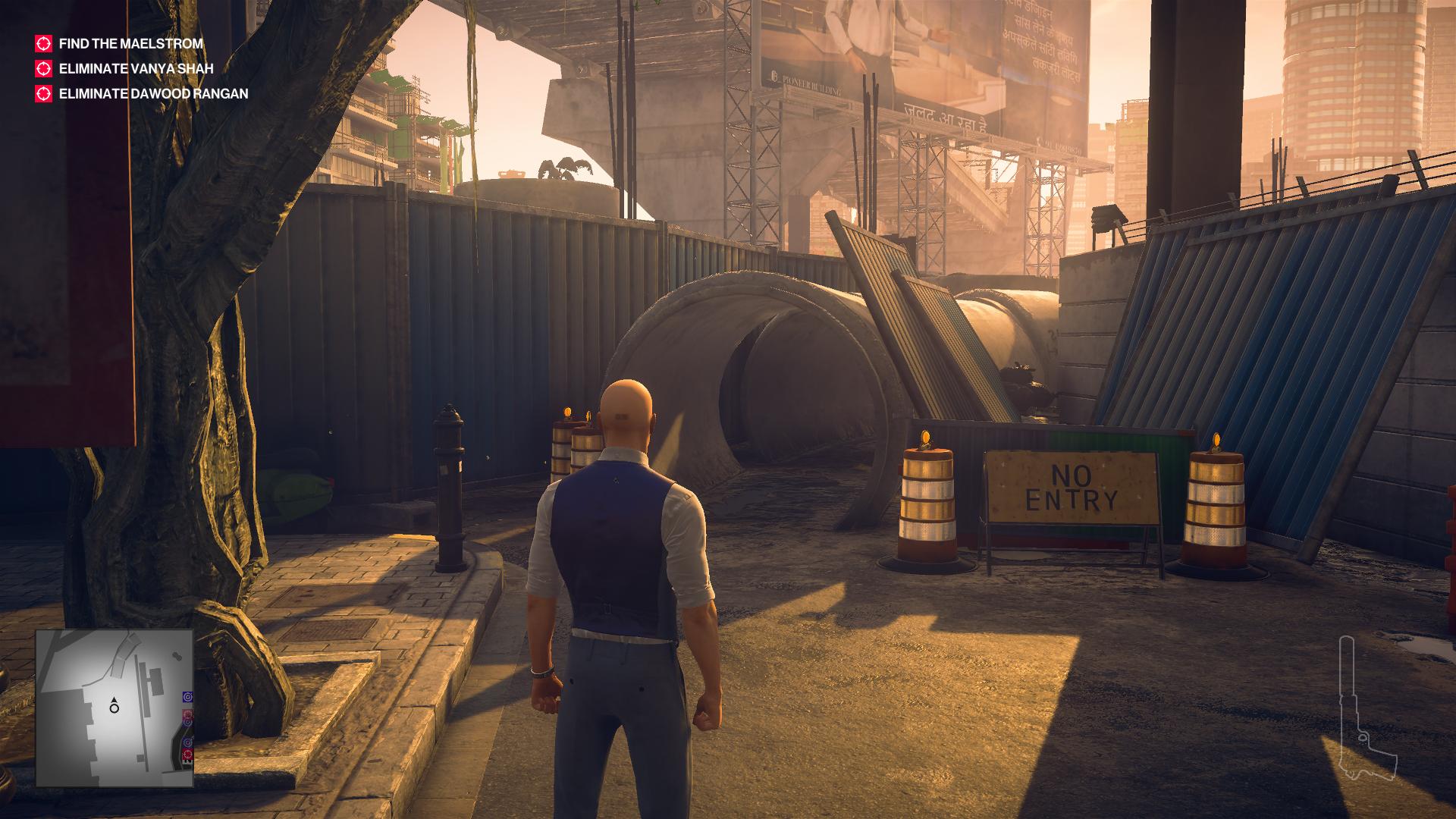 Your first target is Dawood Rangan. From your starting position, proceed through the crowded street and bear left when the road opens up so you can reach the back of the under-construction tenement building. If you follow this road all the way around you’ll eventually reach a no entry sign and a large pipe you can sneak through. Do so, but crouch down as you approach the exit as you’re about to enter a hostile area.

Stick to the back of the construction site and move around the outer edge, using the materials and pipes as cover as you move. You’ll spot a smoking security guard a short distance ahead behind a large pipe. Sneak up behind him, knock him out and steal his uniform. 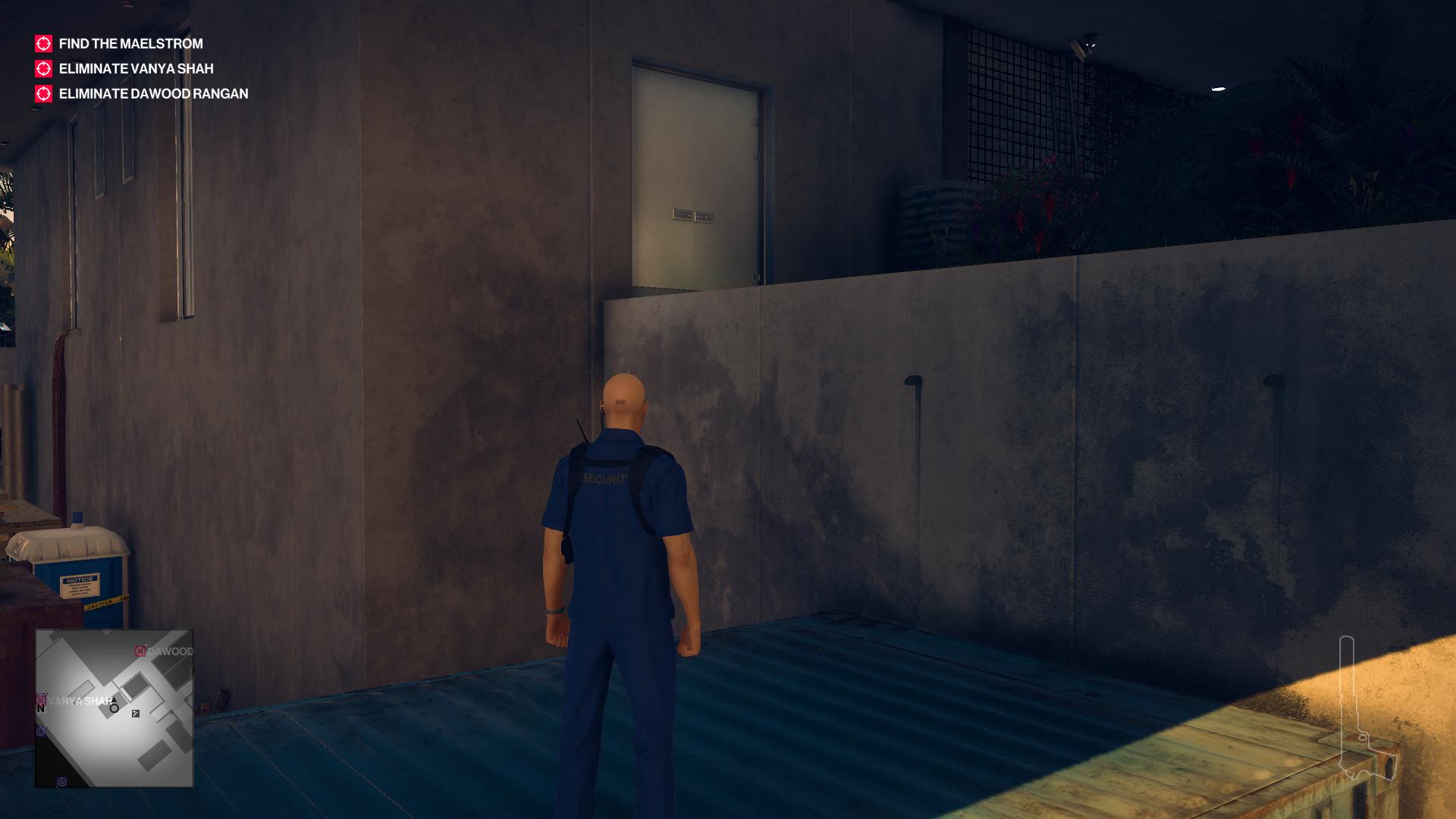 Now you’ll want to move towards the building, watching for the one security guard who can recognise you. Instead of heading up the stairs, though, climb up the blue container on the left to avoid the security camera and slip through the double doors. From here, make a right past the elevator shaft and go through the door on the right. Move up the large ramp and head towards the canteen at the back of the room – you should see it labelled on the walls.

Immediately in front of you will be a huge table of food and three film crew members. Duck into the storage room on the left and collect the rat poison inside. Use this to poison a tray of food on the large table, then lay in wait in the nearby toilets. When one of the crew members foolishly chows down, they’ll rush into the bathroom. Subdue them, take the film crew disguise and hide the body in the nearby laundry container. 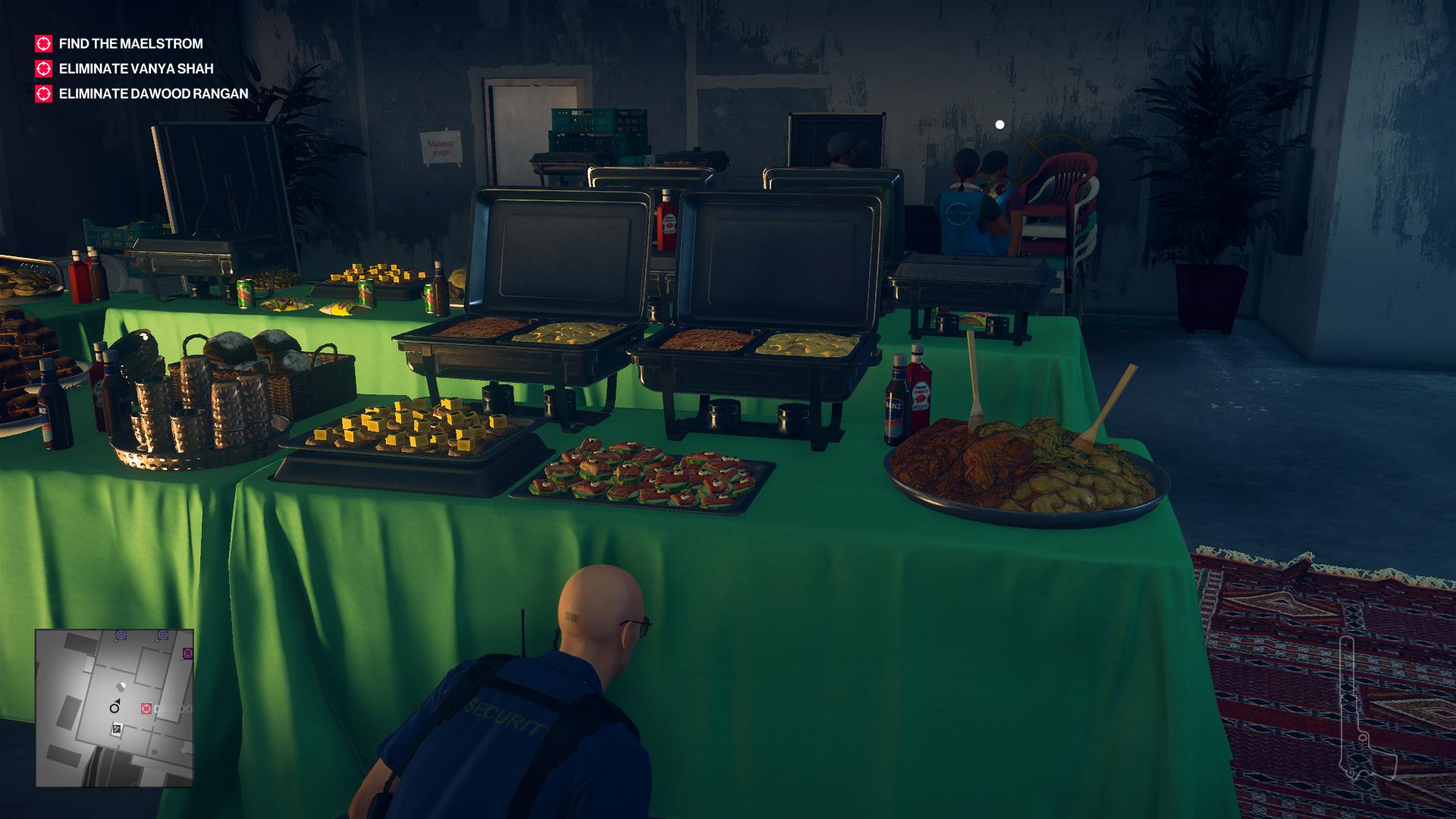 Return to the elevator shaft you passed early and climb up to the second floor, watching for anyone by the doors who will alert security if they see you. Once you reach the second floor you’ll see a movie script teetering on the edge of a beam. Flick a coin or any other useless item you’re holding at it to knock it down. Collect it from the bottom.

Now, make your way back up the building while following signs to the movie set. You’ll want to find the movie director, who you’ll recognise in the pink scarf and hat. Hand her the script and you’ll be asked to control the industrial fan for the scene. Before you take up the position, though, collect the screwdriver from the shelves on the set and loosen the safety measures on the fan. 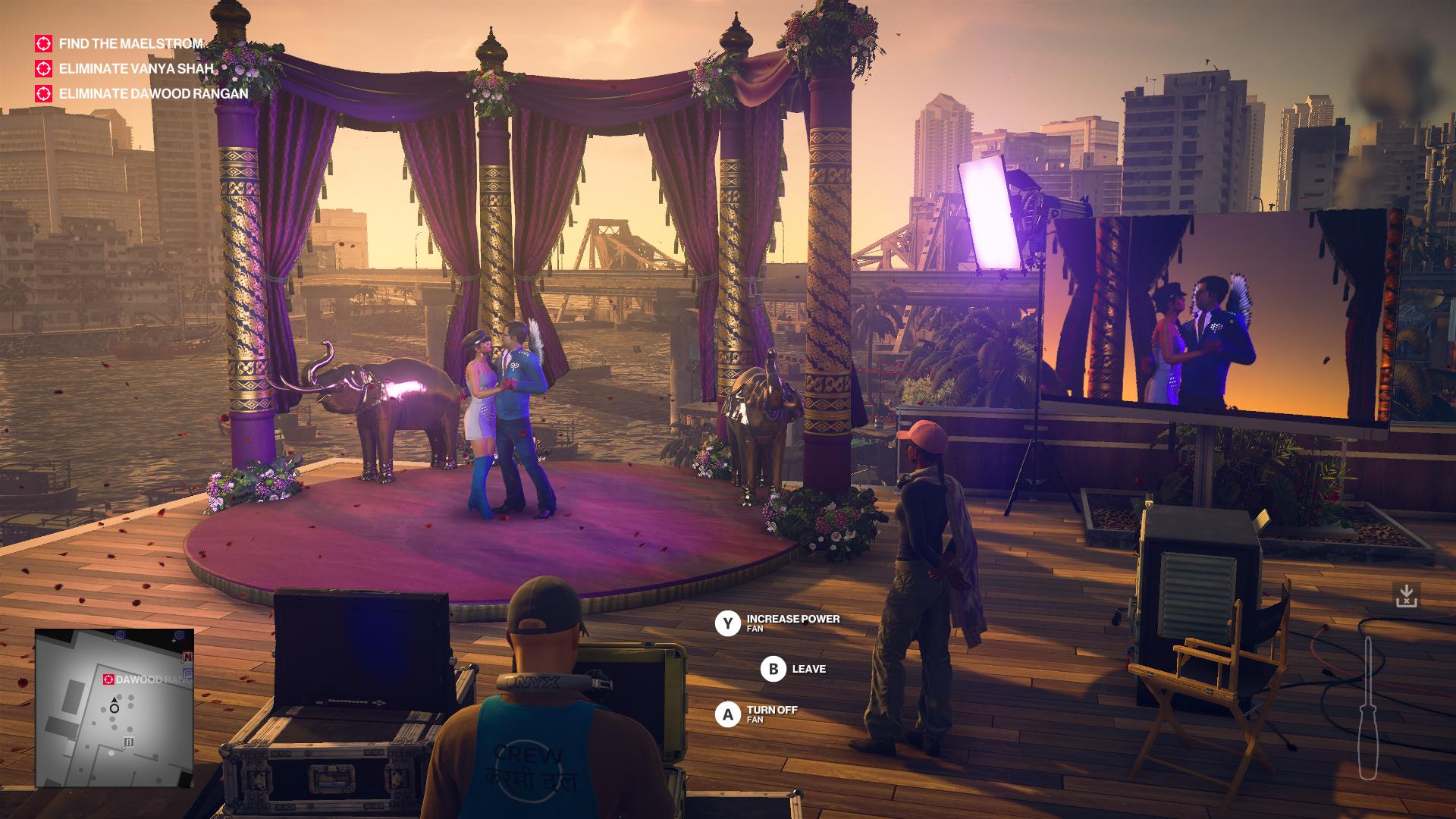 Wait for Dawood to join his co-star on the set and they’ll begin to play out the scene. Watch it unfold in discomfort and when the co-star leaves the stage give Dawood an extra powerful blast from the fan to send him flying off the building to his death. That’s one down.

Step 2: Identify and kill the Maelstrom

Make your way all the way back down to the construction site and out the rear pipe again to avoid guards or security cameras. From here you’ll want to proceed towards the slums, which is best using the upper walkway to avoid many of the lookouts from the Crows gang. Additionally, a short way down this bridge you can veer to the left and onto the rooftops towards the hideout of the Crows. 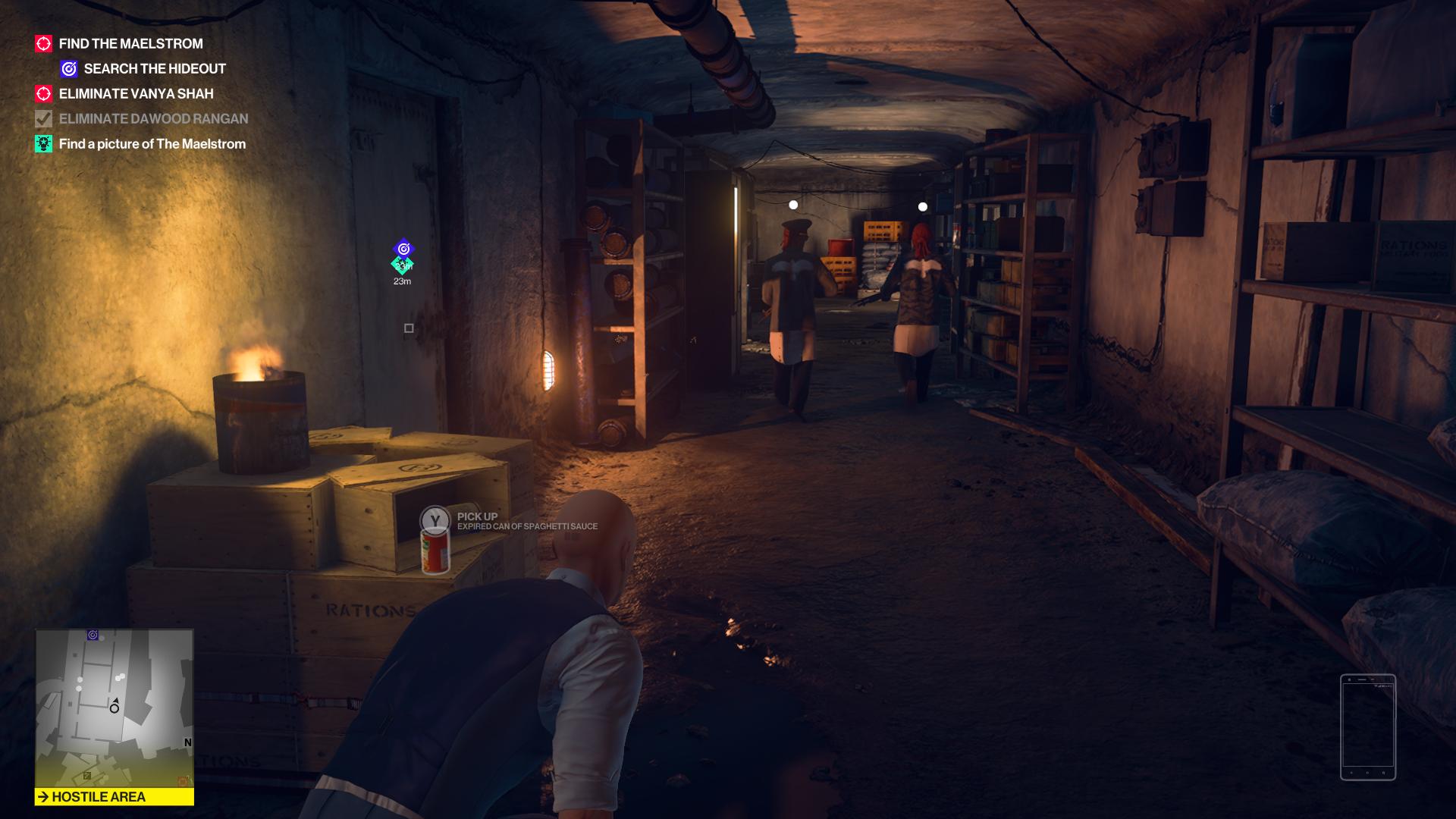 You’ll need to be especially cautious of patrolling guards here, though their routes are fairly easy to predict and manoeuvre around. You’ll want to make a left at the bottom of the stairs and follow the corridor around to the right. Duck into the smaller room on the right before the two stationary guards and wait for the two patrolling guards in here to start moving away from you.

Follow them and hide in the cupboard, waiting until they pass you again so you can continue. If you follow this corridor to the left, you’ll reach another small room with one guard in it. When he looks away from the door, slip in and pick up the photo of The Maelstrom on the table to the left. For ease, you can subdue this guard and disguise yourself as him to save some stress getting out of the HQ – just remember to hide the body in the cupboard too. 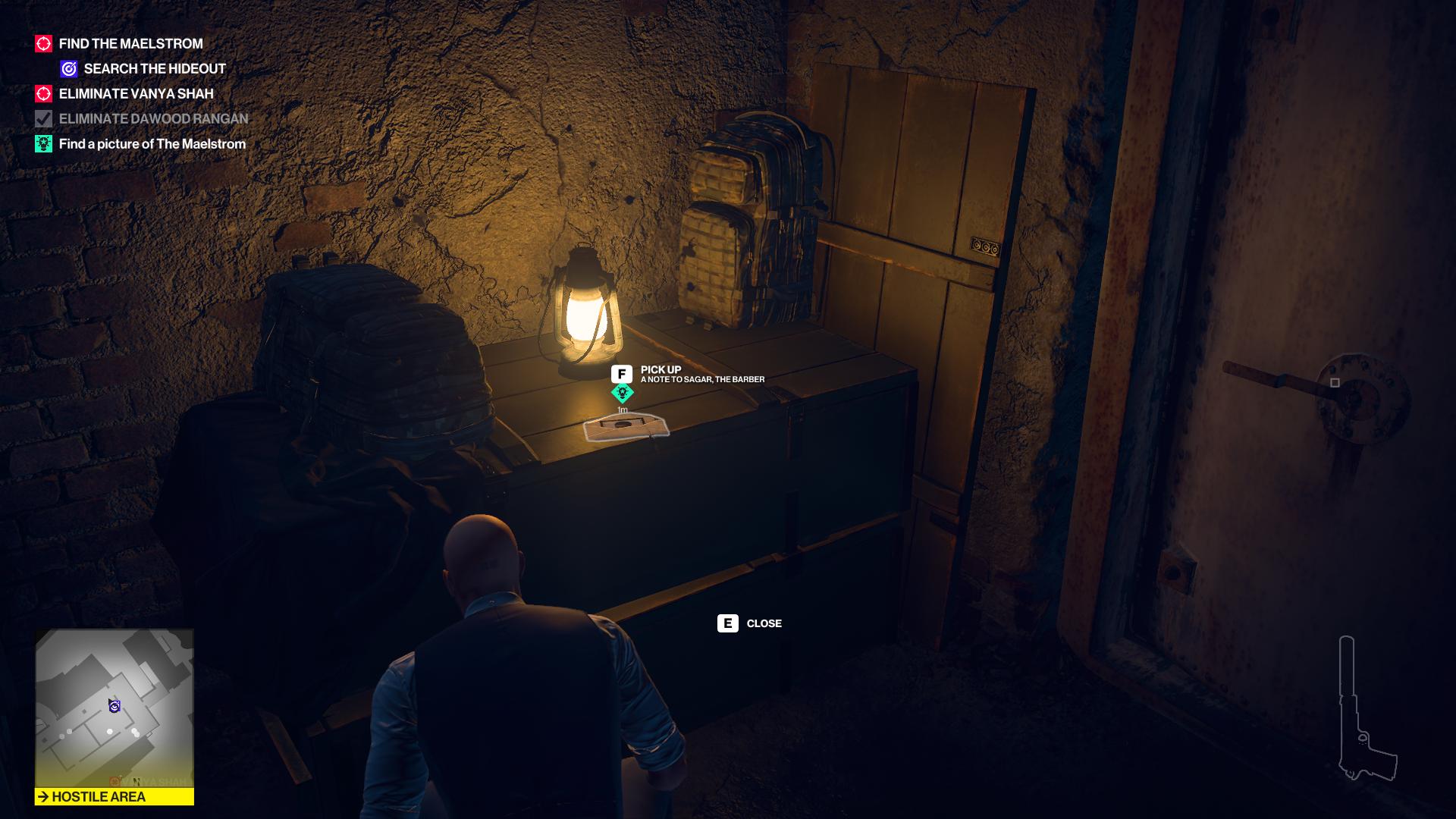 Now, you need to track down the barber in the slums. The easiest way to find his shop is to look for the large artwork of a man’s face on the shutters. There’s usually a large crowd outside too, yelling for him to open the shop. If you move around the back you’ll overhear a conversation between the barber and his wife from inside the house. Wait until that’s over then sneak inside and knock the barber out. Quickly disguise yourself as him and hide the body in the closet before the wife returns. You can play it safe and subdue the wife too if you prefer.

Then, head downstairs and open the shop using the key on the side table. Take position at the front of the store and watch the approaching customers until you identify the Maelstrom. When you do, offer him a shave and lead him inside. Once he’s taken a seat in the chair you can toy with him for some time or slit his throat immediately. Hide the body in the nearby container. 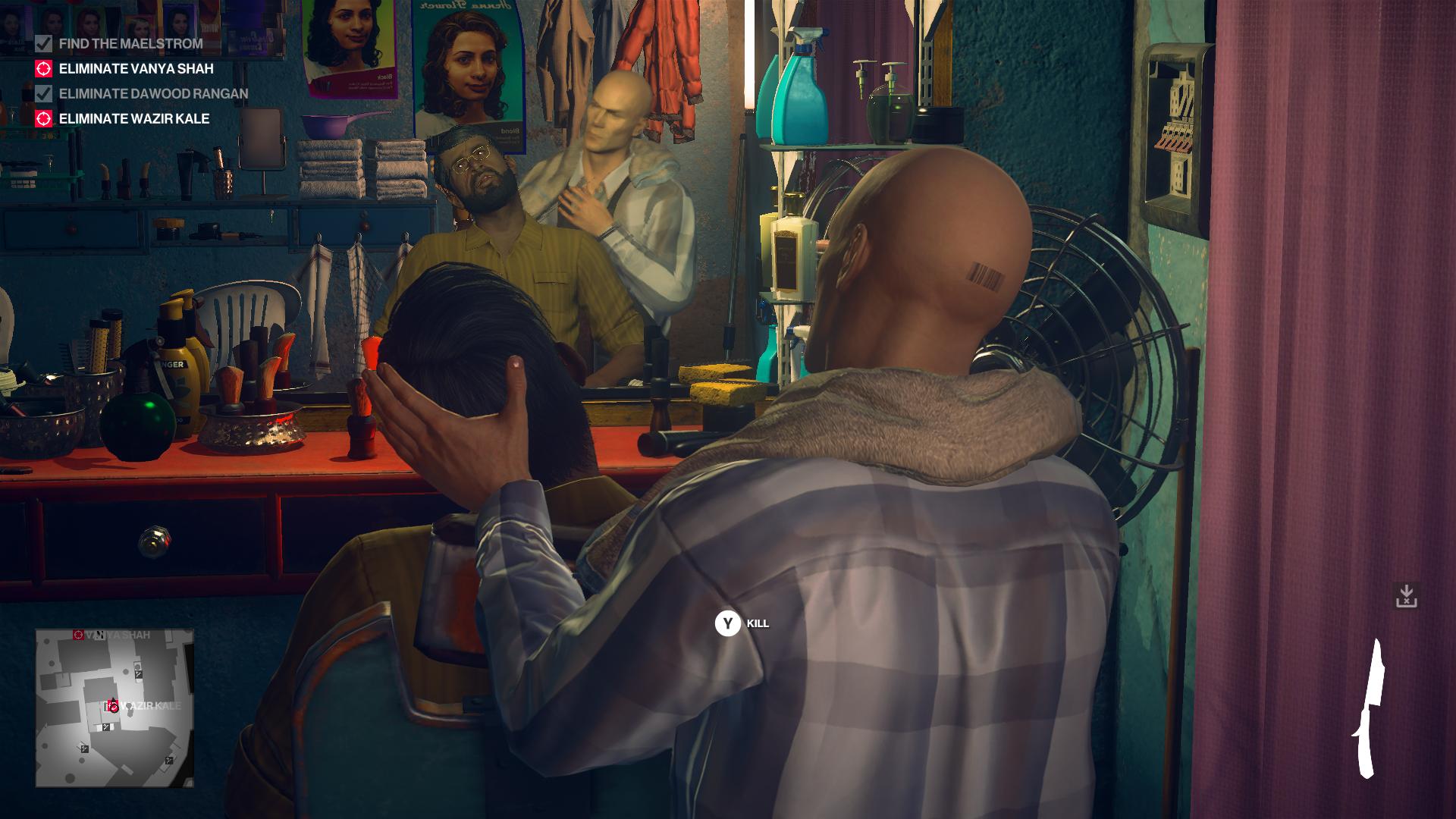 You can now move onto the final target, Vanya Shah. Head towards the train yard on the far left of the map and by the entrance you’ll find the tailor shop. After a short confrontation, the tailor will flee into the slums – follow him and when he stops in a secluded alleyway take him out. Be mindful of any random NPCs who may have followed you for no reason. You can hide his body in the nearby toilet and then take his clothes as a disguise. Take the key to his building he will have dropped too.

Make your way back to the tailor shop, but enter through the stairs at the rear to avoid being spotted. Use the key to open the door and pick up Vanya’s dress order from the table, along with the coins and measuring tape in the room.

Head back out down the stairs and make a left into the slums. Directly in front of you will be a stand selling cloth. Negotiate with the dealer for as long as you can be bothered or need to (he’ll go all the wait down to one coin if necessary) and take the cerulean cloth once a deal has been struck. 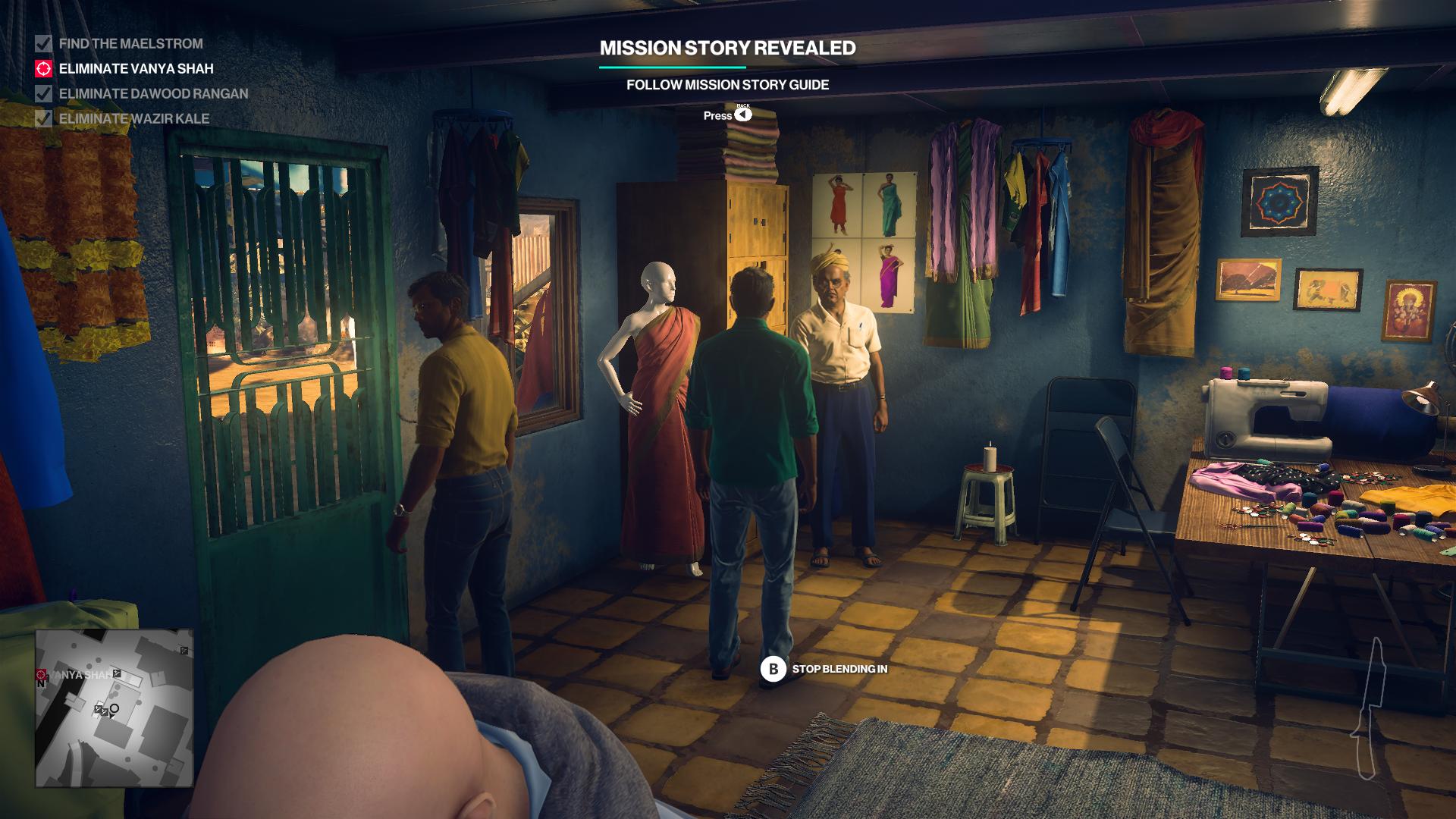 Return to the entrance to the train yard, minus any lethal weapons you may have picked up on the way as you’ll need to pass a frisk. Once inside, you can follow your escort to a meeting with Vanya, making sure you stick close to the walls as you enter the huge building to avoid being seen on camera.

Vanya Shah will ask you to approach her and show the cloth. Hopefully what you have is cerulean or things might be about to get problematic for you. Correct cloth colour in hand, she’ll lead you through to her private chambers where you can take her measurements. 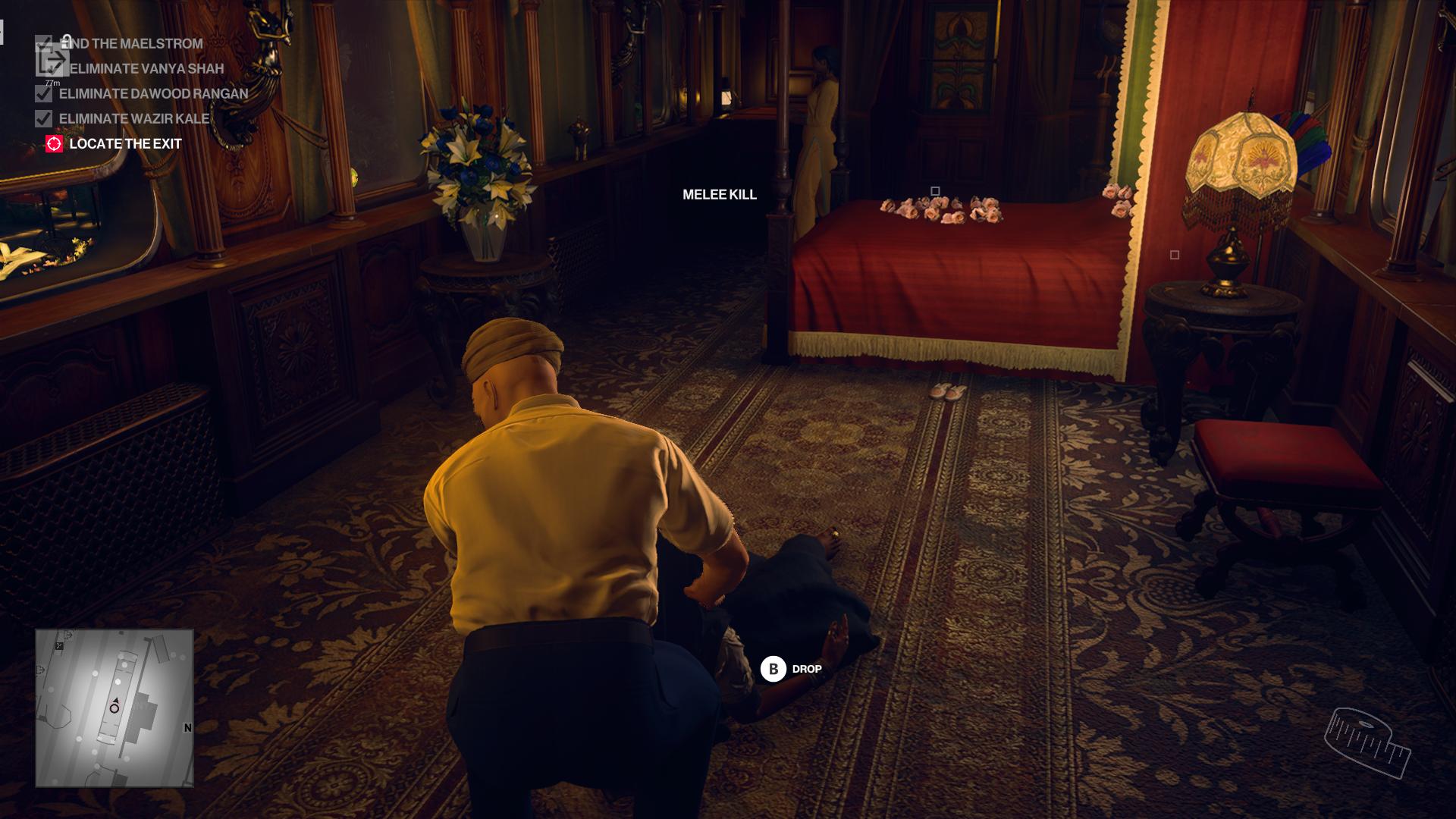 Once you get a fair way through the process, you’ll have the opportunity to garrote her with the measuring tape. Her aide will be in the room the whole time but won’t even notice. It’s worth subduing her, though, so you can then hide both bodies in the nearby container.

All that’s left is to make your escape. You can go out the same way you entered, being mindful once again of security cameras. If you head right from the train yard and towards the beach, you can either pay for a taxi to make your escape or take a boat for free a little further down.