If you click on a link and make a purchase we may receive a small commission. Read our editorial policy.
This is The Mechanic, where Alex Wiltshire invites developers to discuss the difficult journeys they’ve taken to make their games. This time, American Truck Simulator [official site].

Oh, to visit Spokane on a bright summer morning. Bakersfield, Albuquerque, Reno and Salem. The evening sun shining across the surface of the I-10. In these locked-down times, American Truck Simulator is a chance to tour America, or at least its western edge, running from Washington in the north down to California in the south, and over to Utah and New Mexico in the east.

These states are articulated by highways and truck stops, industrial centres and sweeping multilevel interchanges. But that doesn’t mean their sweep isn’t glorious. America is, after all, built on trucking. The industry’s motto is, “If you bought it, a truck brought it,” and in ATS you get to experience mass haulage in a world which aims to mirror, as close as it can, the great American west. But it was built in Prague, on an engine that sometimes requires clever tricks to represent the scale of it all, by a team of map designers who are strangers to American culture.

ATS has taken a long road to get to where it is today. Though developer SCS Software had made trucking games before, including 18 Wheels Of Steel and the first Euro Truck Simulator, ATS’s direct roots are in 2010’s German Truck Simulator, which featured cities which were little more than squares surrounded by a few buildings. Then in 2012, Euro Truck Simulator 2 expanded the same map to surrounding countries and connecting them with new roads.

“That’s when I joined the company,” senior map designer Patrik Sadloň tells me. He was 16. “My first road was in the UK, around Southampton.” Back then, the team didn’t have many assets to work with to depict local flavour; in the UK they placed sunflowers everywhere.

“Then someone wrote on a forum, ‘Hey, what the hell is wrong with you? The UK doesn’t really have sunflowers!’ These kinds of mistakes happened regularly. We had no research department, we did it all on our own, two days of researching and then a few days of making the map with nobody who lives in that area supporting us.”

Though made by just 25 people (“The whole of Europe. It was crazy. Now we have 180 people”), Euro Truck Simulator 2’s sales blew up, allowing SCS to expand the team and its ambitions for the game. So, when they added Scandinavia to the game as DLC in 2015, it introduced a swathe of new assets, skyboxes, lighting -- and custom junctions.

In the old days, junctions were big, immutable chunks of prefabricated geometry which came fitted with lines for AI vehicles to follow and set places for signage. They made it quick to throw together a road, but these prefabs were slow to render because computers had to handle all their geometry at once rather than in many smaller sections, and they couldn’t be adapted to fit specific places.

With Scandinavia, though, came a new template system, in which a map designer can place single small sections of highway, and then the engine generates connecting road between them, based on camber, curvature, lanes and many other features to make every highway and every junction unique.

“That allows us to create these massive things,” says Sadloň, showing me a vast junction in Phoenix. He personally made well over half of the junctions since New Mexico was created. “America is full of them, so why not?”

“It takes a lot of skill to get the roads right,” says fellow senior map designer Jakub Mráz. “Roads in real life follow a massive number of rules: when you’re travelling at full speed, like 65 miles an hour, the truck shouldn’t roll over, the curves have to be a certain size. It’s all very technical.”

Since ATS’s world is its roads, getting the roads right from the start is vital. Having to rejig a road at the end of production means also having to rejig all the things that are attached to and oriented around it, from terrain to signage.

One thing the engine can’t do is generate signs. They’re all hand-produced. “The names, the directions, the shields, the arrows, everything. If we could put a sign down and the tools automatically do their magic, that would be a lifesaver,” says Mráz, laughing. “We actually have an external specialist who only focuses on signs in ATS, because it’s such a huge and difficult task.”

Earlier in ATS’s lifetime there were many incorrect signs, but times have changed. Since making New Mexico, which was added in 2017, they’ve been designing the world for players - often truckers - who want the purity of navigating by signs, rather than leaning on the in-game GPS. 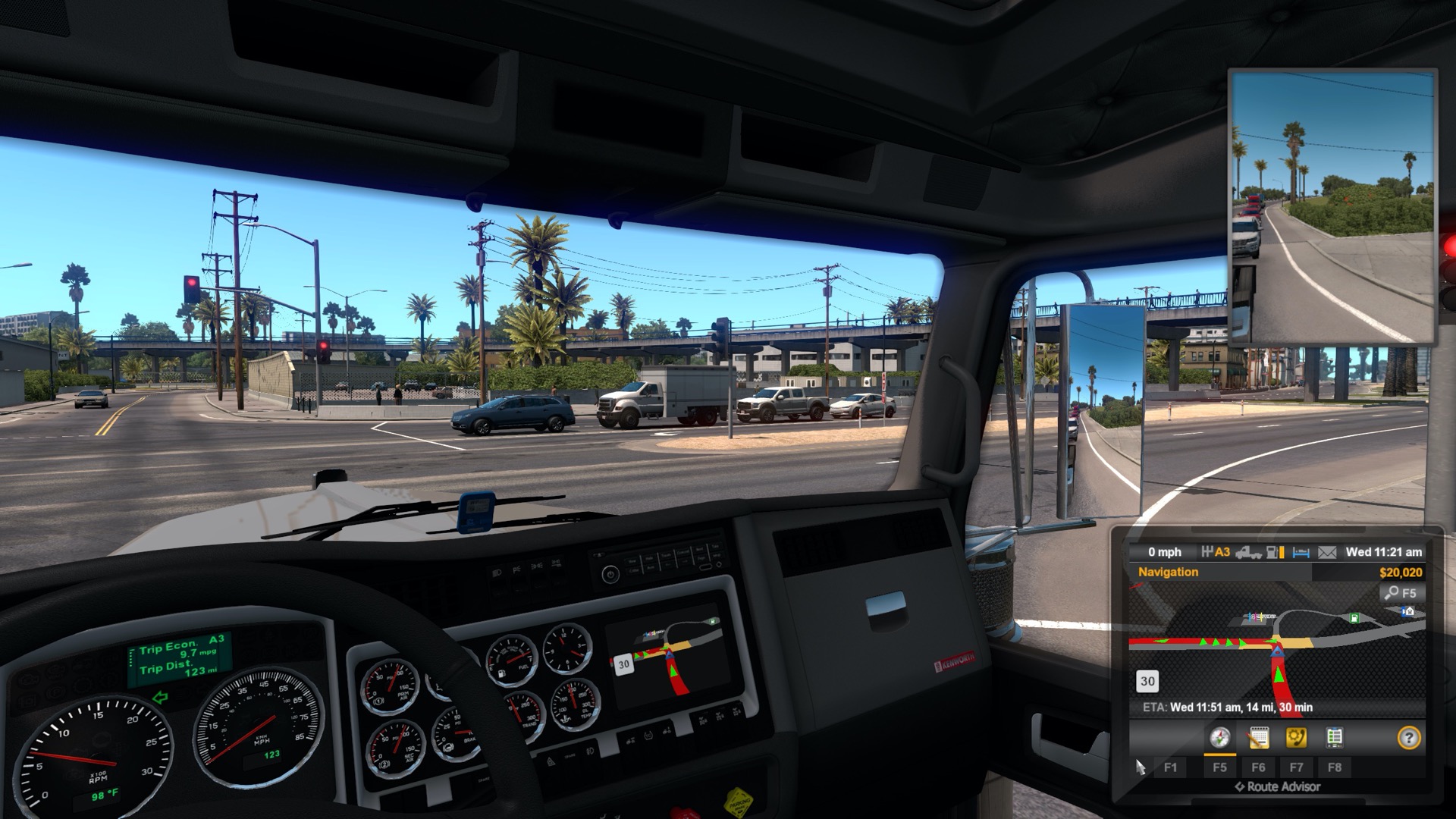 ATS always puts trucker culture first. It defines every choice for what appears in the world, which is sketched first through identifying the kinds of places that are important for truckers.

“Which are the largest cities, which are the most interesting in terms of industries?” says Mráz. “You might have a giant or beautiful city but it has has no industries for us to represent. You’re not going to haul a bulldozer to a museum. The world has to make sense; the cities have to have an industrial background for us to work with.”

The next step is for the team to deeply research these locations - principally on Google Maps and StreetView - to find the major routes into these trucker-relevant locations, which they try to represent at 1:1 scale. This means newer cities, such as those in Oregon and Washington, are pretty close in form to the real places.

And yet few members of the map design team have even been to the US. “Patrik has a few times,” says Mráz. In fact, he recently went on a research trip there, something SCS Software is increasingly doing.

But Mráz has never been. “As you can imagine, recreating American culture and atmosphere from Central Bohemia is kind of hard, so it takes a lot of effort to get things right. Things that Americans consider second nature, they’re completely alien to us, and we have to experience their mentality a little bit as well.”

While important locations are presented at 1:1, the rest of ATS’s world is at 1:20 scale, so every mile on screen is 20 miles in real life, and there there isn’t space to include every road and landmark. “Sometimes we engage our community to pick important spots, because we may be able to pick out 80% right, but then we might skip 20% of what means a lot for the truckers,” says Mráz.

Sadloň shows me Pacific Tower in Seattle, a distinctive 1930s building where Amazon used to be headquartered, on a hill next to a highway. “That building is specific for that place,” says Mráz. “We had to request the model, put it in the map, figure out how big we want it so it feels right. We’re trying to represent the spots that truckers remember from real life.”

But for a game set across the entire north-south extent of the USA, and with ambitions to include a lot more, ATS suffers a decidedly limiting problem. Its engine isn’t designed to draw any more than 1500 metres into the distance.

That’s true for almost everywhere, but in the plains of New Mexico this limit is extended to 4000 metres to allow distant low hills to be visible. “Otherwise we’d have a flat horizon,” says Mráz. But since it’s shoehorned into an engine that wasn’t designed for it, 4000 metres is extremely performance-heavy, so in general, ATS’s map designers have to get clever to deliver a sense of scale.

“We have to work with what we have, so we use perspective tricks, where a canyon might only be 1000 metres away so we use a trick to make it look further away. We darken the textures, use fog to hide that it’s so close.”

One common place a trick is used is on downtown skyscrapers, which are represented by dynamically scalable models. At distance they’re rendered smaller than they should be, to give the impression that downtown is further away than it really is. Then, as you near it, the game ever so subtly scales it up -- impossible to notice at the speed a truck travels -- until it’s towering, credibly, above you.

“The world is a lot smaller than you might think it is,” says Mráz. “That’s something we can be proud of in ATS, because the way our previous games were made, they were a lot of tight corridors to make them simple to produce. But with ATS and especially New Mexico we started to push the boundaries of our engine to try to recreate the world as it is: no more artificial corridors. We’re trying to make the world as wide and big as possible, because the USA is huge.”

And the game is designed to emphasise that expanse in the way it represents time: just as the world exists at 1:20 scale, time also proceeds at twenty times normal speed. That way, a driver can easily experience a red sunrise and golden sunset on any given journey.

“You need to see the change of atmosphere and scenery, so you feel you’re travelling between Stockton and Sacramento, or San Francisco and Las Vegas,” says Mráz. “We’re creating an illusion, and the scale helps us a lot, both the time and space scale.”

Not all of what’s important in ATS’s world is about placing obvious landmarks. There were major omissions in the first areas of the game, things that every trucker needs and uses: truck stops and rest areas. “The simple term, ‘truck stop’, it tells you it should be part of trucking culture, right?” says Mráz. So they added them.

And beyond trucker players, adding rest stops played into making the game better for casual players. ATS represents real-life laws on how long a driver is allowed to work before resting, as well as finite fuel, so distributing places where the player can rest and refuel across the map helped to de-stress driving long journeys.

And now we can’t go to any of these places in real life, I appreciate having a gentle way of experiencing their grandeur. ATS’s capacity to deliver us into in the spirit of the American west’s cracked asphalt and grand vistas, rest stops and skyscrapers, warehouses and waterfronts - normalcy and magnificence all witnessed from a tall cab on the open road -- is exactly what I need right now.