Hey, remember Dead Cells? You should, because it's not even out of early access and we named it our game of 2017. It’s a combat-focused platformer roguelike that John refuses to call a metroidvania (although it is).

The game's received another large update since anyone on the site wrote about it, though I’ll save most of what’s in the Foundry Update for another time. This is an article about one little item that solves one very big problem. It’s about how the Hunter’s Grenade gives me something to work towards with every fresh start, and why I was still playing at a point when I’d seen almost everything the game had to offer.

I’m calling it a pokeball, though perhaps that’s misleading: it’s a tool for gathering blueprints. Once you’ve bought it from the Collector that appears between each level for 100 souls, it’ll always appear behind a door on the first level. It costs 7,500 gold to unlock that door, which isn’t the kind of money you’ll have until you’ve bought several expensive Collector upgrades that let you carry money over from your last run.

(Although you can just break down the door if you don’t mind being cursed, which means until you’ve killed 20 enemies you’ll die to the next bit of damage you take. It’s a mark of how good this game is that I’ve gotten sidetracked explaining one neat system in an introduction to the even better system I meant to rave about.)

To use the Hunter’s Grenade, you first have to throw it at an enemy that you haven’t yet chopped into bits enough times for them to have dropped every possible schematic. Then, you have to battle an elite version of that enemy - tough, teleporting bastards who have far more health and do far more damage, and can summon their own minions. Once you’ve done away with half of their HP, you have to grab the second part of the Hunter’s Grenade and zap them with it - and only then will they drop a lovely new blueprint. 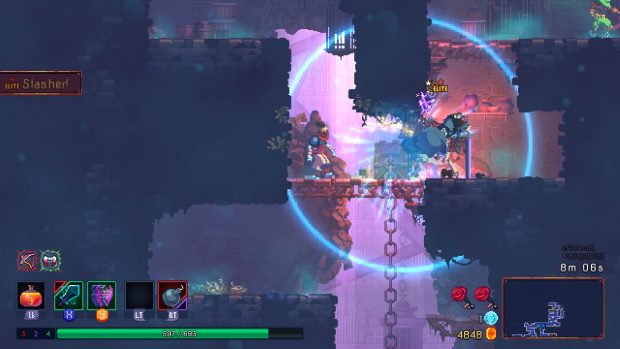 There’s a touch of Monster Hunter or The Witcher to it, if you want to properly prepare for the fight. Clear out those nearby enemies, chug down a healing potion and lay down some traps - you’ll need them to tackle the elite. That’s especially true for the later enemies, which can be hard enough in their regular forms. It’s a small thing, but there’s something I find really appealing about fighting a battle on my own terms.

What I really love about the Hunter’s Grenade, though, is that it gives every run a sense of purpose. With the Foundry Update, I’m back at a stage where I’m unlocking several new blueprints on most runs anyway - but before then, it was that pokeball that kept me coming back for more.

I’ve previously written about how I tend to stop playing roguelikes once I’ve beaten them for the first time, but I didn’t find that with Dead Cells. At first that was down to wanting to unlock every ability, then to see every area. Now I want to find every item, which is a goal I wouldn’t have begun to consider if I hadn’t been given a tool that encourages me to go about accomplishing it. It’s transformed what might have been a miserable grind into one of the game’s best features. 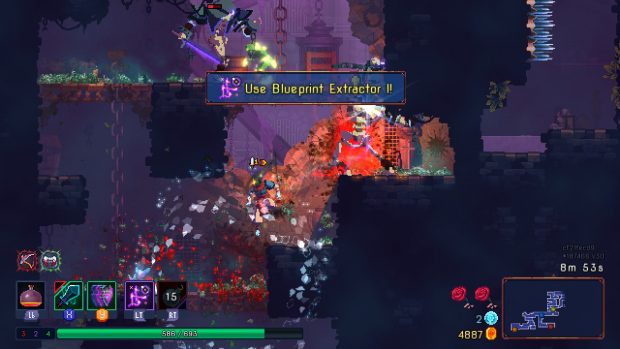 There are other ways to fix that stagnant end-game problem. Enemies could have an increasing chance to drop their blueprints each time you kill them, or the devs could have found another way to guarantee that you find a new blueprint in each life. Now that I’ve got my pokeball though, I can’t think of a more elegant solution. It gives me agency over loot drops, a fun ceremony in preparing for each tussle with a new elite, and a delicious sense of deferred gratification.

To expand on that last point, the item takes up a skill slot, which I’ve seen some people complain about but to me only adds to the idea that I’m investing in something. When a game gives me a chance to make things more difficult for myself in the short term in order to make things easier or more interesting in the future, I’m usually glad to take it.

It’s worth highlighting how the Hunter’s Grenade owes its underlying appeal to how finding each new blueprint is a Big Deal. Most skills and weapons in Dead Cells significantly change the way you play: on my last run I found a dagger that crits whenever you stab things in the back, and I can’t wait to combine that with the skill that lets you teleport behind people. 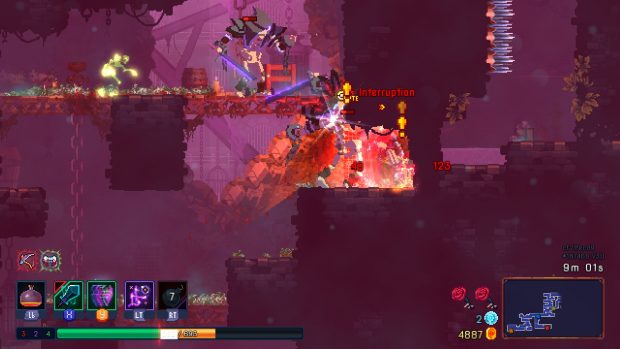 The joy isn’t just in discovering and playing with that new item - it’s in the dizzying possibilities of using it with any other weapon or skill in the game, which makes each run feel unique in a way few other roguelikes manage. I’d love to see other games include something like the pokeball, but the ultimate reason it works so well is because Dead Cells is a great game through to its core.