Some of the images in this article are a bit NSFW -- as are links to the games mentioned.

In LustDoll, a RPG/porn game hybrid that finished development last year (and is now being remade under the name of LustDoll+), the main character awakens without memories in a ruined laboratory, to embark on a quest for identity and memory in an utterly nonsensical world. Along the way, they will meet a great variety of creatures, ranging from women and men, through harpies, slimes, demons, unquiet dead , knock-off zerg, malevolent computers, all the way to the Grays.

They will also fuck them all. Or, more accurately, be fucked by all of them. 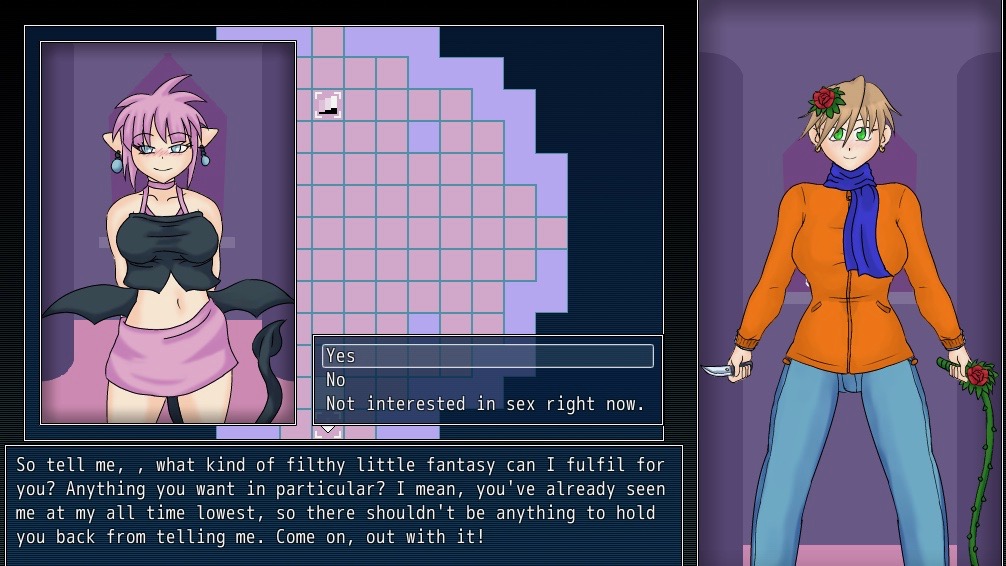 Every encounter the game throws at the player is a chance for a new sex scene. The overwhelming majority of text is smut or smut-related. And just like in Corruption Of Champions, the depictions of sex are capital P problematic.

The game’s attitude towards consent can be charitably described as cavalier; that is to say many sex scenes are pretty much rape (although never called that explicitly) of the main character at the hands of whoever they lost combat to, played entirely for titillation and not critically examined in the slightest.

Likewise, there are numerous opportunities to initiate non-consensual sex with NPCs, and these sometimes open a path to further romance. This fetishisation of non-consensual sex is, unfortunately, a widespread phenomenon in the sub-genre of smutty RPGs, and is seen in another notable feature of LustDoll. The "lust meter" is a sort of reverse stamina bar that fills up with things that “arouse” the main character, and which causes defeat and loss of control once totally full. This idea of lust as some sort of an external power that a person has no control over, and which all but hijacks their faculties once it reaches a certain threshold, is also how the game justifies why everyone seems to want to screw everyone else at a drop of the hat. 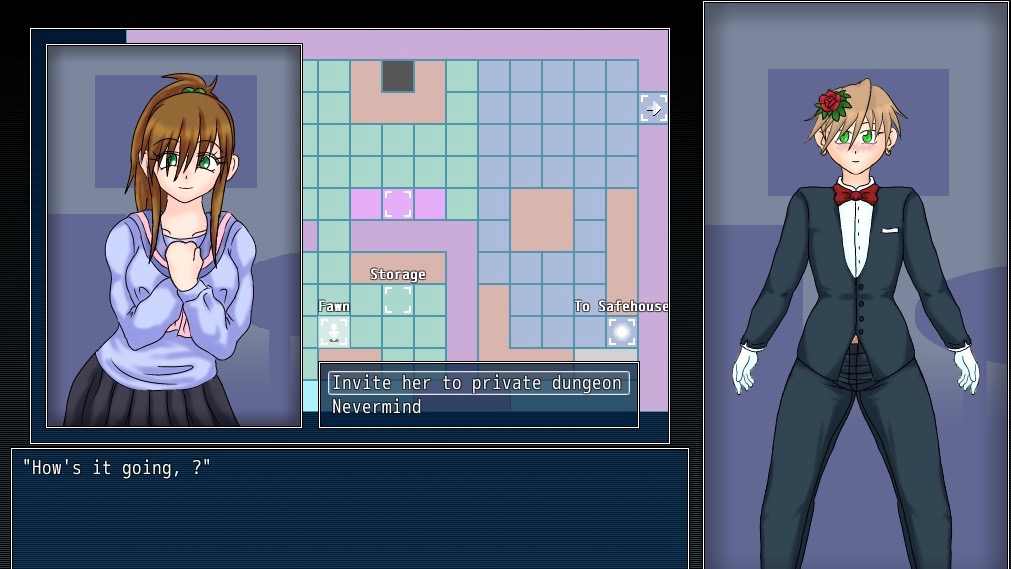 However, this same-sex focus is not immediately obvious. LustDoll’s character creation process is, at least initially, surprisingly encompassing. The player is asked to choose body type, pronouns and terms of address (from a list ranging from “girl/boy” through “doll” all the way to “lifeform”), as well as gender identity, and no congruity between them is expected or enforced. On a cursory glance, this can seem strikingly inclusive.

A more inquisitive look will, of course, readily reveal some serious issues. For example, the terminology used to describe available body types divides them into “girl”, “boy”, “hermaphrodite” and “futanari”; the only choice the player is given here refers to the configuration of genitals and/or breasts. The overall body shape is set and inviolate: a fetishised, traditionally feminine form, clearly coded as girlish whether it brandishes a penis or not.

Once the identity is thus forged, in a process at the same time expansive in its options and limited in its representations, the game asks whether the sex scenes with male partners should be enabled. Significantly, this happens in lieu of a choice of a sexual orientation of the character. The same question is not asked for any other gender expression, so just as the body shape must default to girlish, so must girls in this game be sexable. Already LustDoll, for all of its apparently inclusivity, makes clear that it isn't smut for gay men.

This defaulting to same-sex relations between girls extends through most of the game. While there is a handful of men the player character can fuck/be fucked by, they are never characters per se, just faceless goons, gangsters or slavers. They are never given a face; every actual character that the player encounters and can sleep with or romance is explicitly female. Ostensibly, they are a varied bunch: there’s a catgirl (with an extremely disturbing character arc about what is essentially slavery via sex-drug addiction), a demon, a Sarah Kerrigan clone, a high-schooler, a sexy scientist. All of them have broadly the same body shape, the same sort of conventional attractiveness, all of them are into the player character no matter what, all of them can be tops or bottoms, all of them are always available. It’s a small mercy that this narrow focus on conventional, girlish bodies makes LustDoll avoid the increasingly prevalent fetishisation of trans bodies in porn (as no such bodies appear). 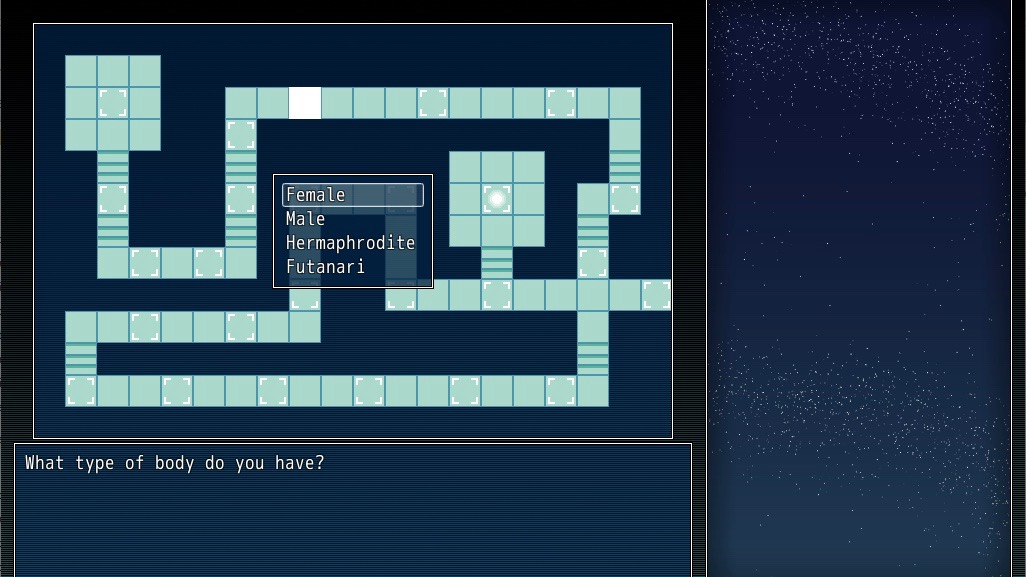 At this point, one might start to wonder why am I even still talking about this game, as it quite obviously represents pretty much every problematic and disturbing trope in pornography. And it is a good question. In Kotaku’s 2017 feature on LustDoll, Indvi, the game’s creator, said that: “I’m hopeful that sex games (and sexual experiences in general) becomes less niche and more generally accepted. It’s a little sad that something so fundamental to human nature is often oppressed or spoken of in hushed tones, as it’s pretty clear there’s an immense, unfulfilled demand for these kinds of games.”

For all the problems with the game, this sentiment is clearly reflected in the attempt at a kind of inclusivity in the character generator. And in spite of itself, it is this attempt can make playing LustDoll a very queer experience.

The thing is, if the player decides to create a character who is not a girl, the experience that the game offers moves from smutty to genuinely uncanny. As the entire framework of the game’s setting is built around sexual encounters between girls, then not being one, and yet being forced into those encounters anyway, starts to distort the pornographic imagination animating it.

This happens on several planes. Most basically, most of the sex scenes are written with an assumption that a girl will be present there, or at least that a vagina and clitoris will; in their absence, the writing will usually substitute them for the anus and the prostate, but, and let's be very clear about this, the anus and the prostate are not the vagina and clitoris. 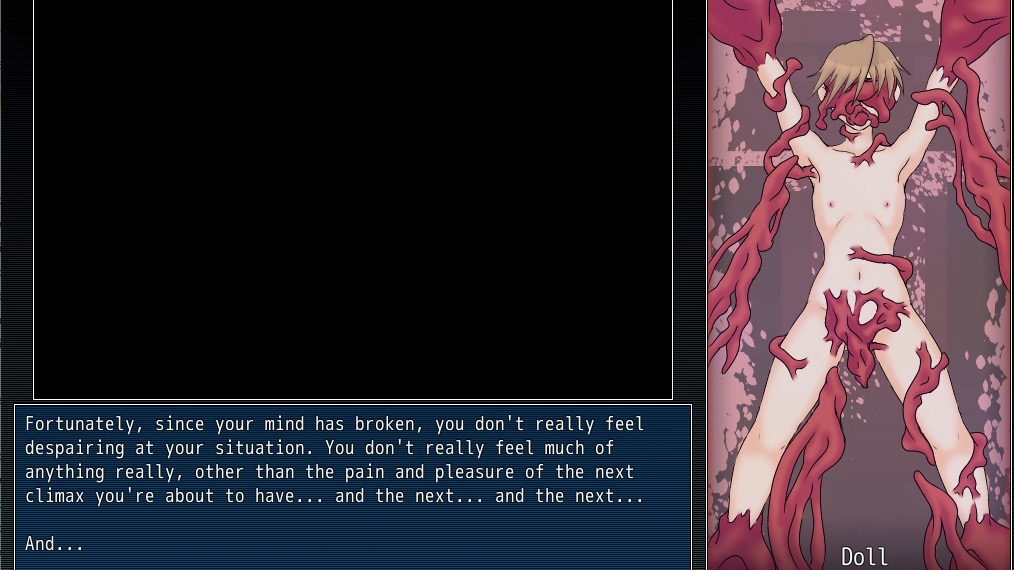 There’s something profoundly strange about reading about a slime monster stimulate a character’s prostate gland in the same way the game describes stimulating the ciltrois, and this strangeness produces an alienating effect, drawing attention to the artificiality and superficiality of the smut being written.

This tendency of the game to treat the character as a girl, no matter who they identify as, extends past just the sex scenes. If your character has a penis and no breasts, chances are that during the course of the game, they will lose the former and gain the latter in one of the myriad transformation sequences LustDoll contains (the other way round is possible, but vastly rarer). There are places where the narrative slips, and the character is referred to as “she” no matter what their stated preferred pronouns are. In the end, no matter the character’s identity or anatomy, the game will insist on treating them as a “girl” and incorporating them into a structure of fantasy where sex is something that happens between girls.

What this means is that playing a non-girl in LustDoll means grappling with a sex/gender system that simply does not recognise the character’s desires and expressions, and constantly attempts to reduce them to a certain fetishised vision of girlhood -- a vision that character does not fit, and yet must embody. 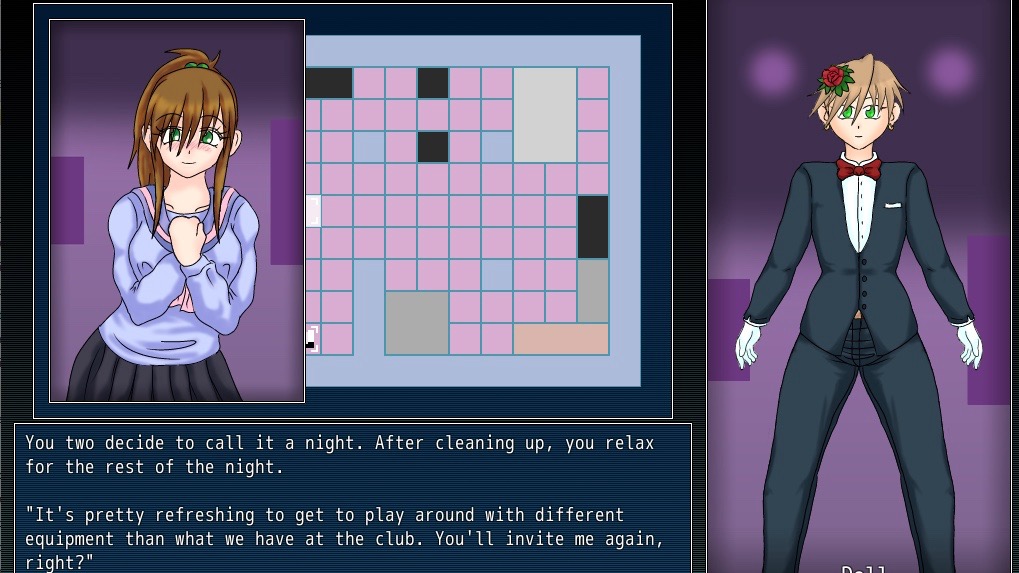 The term “queer” has come to mean a lot of things. Among others, it’s been developed by academics and activists to signify the experiences of gender and sexuality which exceed the social frameworks that are provided for them. That is to say, gender identities that do not fit neatly into the male/female binary,and sexual expressions that cannot be easily reduced to heterosexuality or homosexuality. These are the (as Judith Butler describes them in the book Undoing Gender) “middle regions, hybrid regions of legitimacy and illegitimacy that have no clear names”.

Although hardly heterosexual, LustDoll replicates the cultural problem with heterosexuality, namely the foreclosure of all alternative styles of sexual expression, and the inability to accept the non-heterosexual as real and valuable. And just like as with the operation of dominant heterosexuality in real life, LustDoll's enforced mode nonetheless leaves some room for living differently to what it assumes is normative (in this case, cis-woman fetish-objects interested primarily in sex with other cis-woman fetish-objects).

But to have this different life means breaking conventions of the game-world, means having no comfortable room for oneself in it, and means constantly finding oneself unrepresented, misunderstood, profoundly different. It’s a strange experience. Not really a positive one, but a very queer one.

Does it make LustDoll a queer game? Not really. But the history of queer people has been the history of appropriating representation, finding it in a culture that's in many ways built on their exclusion. Such representation is often provisional, bittersweet, based on insolent misreading of the registers culture sees as improper and unliveable -- such as pornography. Perhaps it is because in such marginal areas, the contradictions and incoherences of the dominant culture show as cracks, and seen through such cracks LustDoll, almost as if by accident, can be queered.