If you click on a link and make a purchase we may receive a small commission. Read our editorial policy.
This is The Mechanic, where Alex Wiltshire invites developers to discuss the difficult journeys they’ve taken to make their games. This time, Hunt: Showdown [official site].

There’s a lot to be frightened by in Hunt: Showdown. Bee ladies, dying horses, a scuttering spider-beast. Slavering hounds, alarms made of clattering hanging bones, zombies. Ducks. It’s like this whole bayou hates you.

But the swamp and its horrible denizens aren’t Hunt: Showdown’s antagonists. The real source of tension is other players. Every detail of this shooter’s design is about engineering a sense of threat from the fact that running around this grimdank hellhole are other people who are aiming to end your bog holiday early.

After all, while you’ll start out nervous of water devils, meatheads and crows, they’re predictable. Other players are not, and a big part of why is that you don’t know much about them.

In Hunt: Showdown’s core mode, Bounty Hunt, in which the object is to grab eldritch tokens dropped by a horrible beast and escape the map, you don’t know how many other players are in the match at any time. You don’t know where they are, and you aren’t told when you’ve successfully killed them. 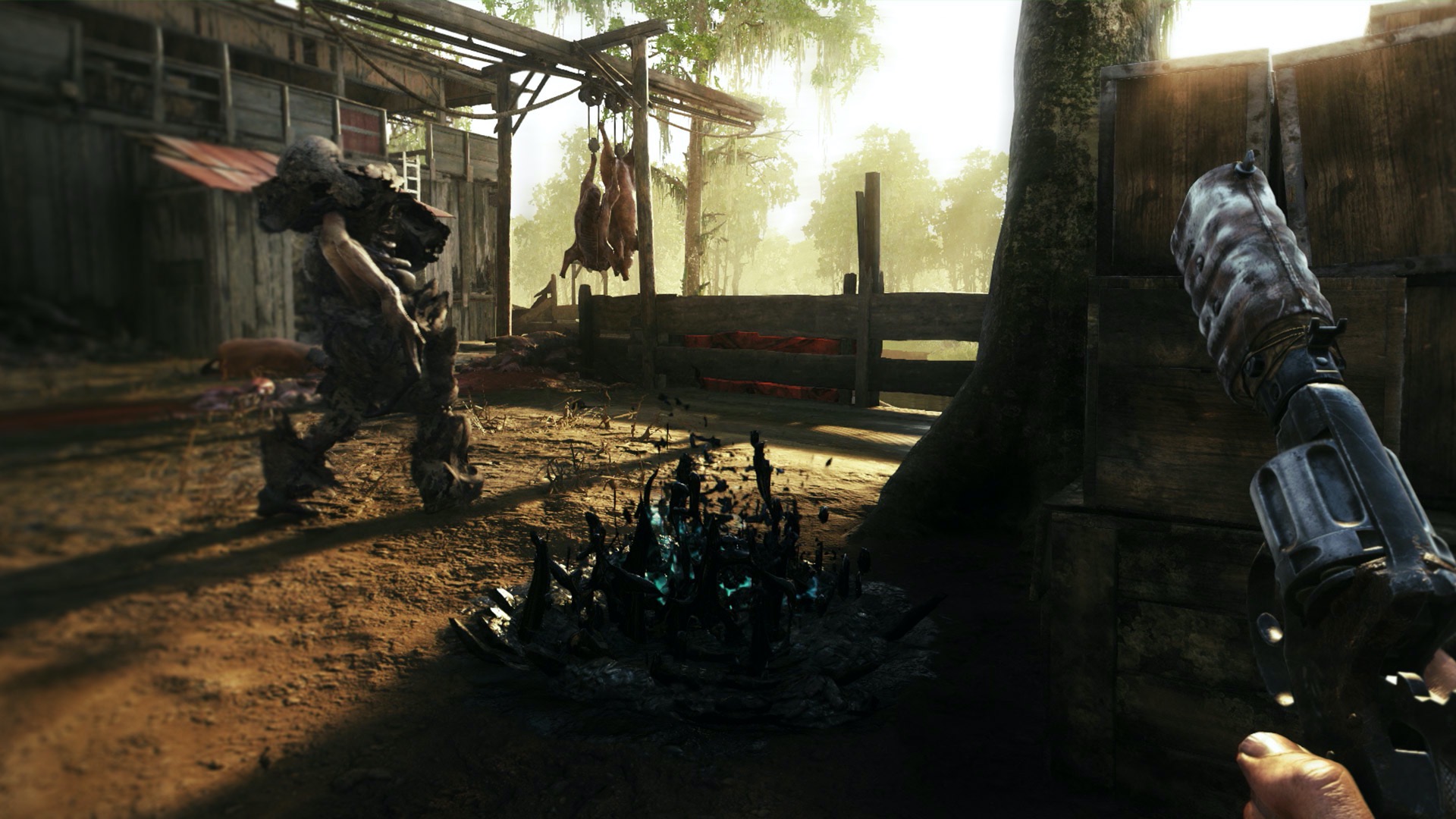 And throughout, Hunt is continually putting you on collision courses with these shadowy opponents. “We wanted to have objectives in the game so players have a purpose,” designer Dennis Schwarz tells me. “It’s not just about staying alive as long as you can, it’s about completing the objective, and you have to have a certain amount of pressure to do that. You can’t sit in a bush for 30 minutes. You have to be on the move, and sometimes you don’t really want to move.”

Phase One: The Hunt

A Hunt match is made up of three informal but distinct phases, each with a different delicious flavour of tension. In the first, you work your way into the swamp, hunting for clues as to the location of the hunt target – or targets – and also about the other players.

“It’s this exploration, an unknown kind of tension where you’re still trying to map what’s going on this time around,” explains Schwarz.

Where are the other players? What equipment did they bring? Should you expect snipers or shotguns? Can they make it to the boss before you? Should you go for the boss or wait it out? 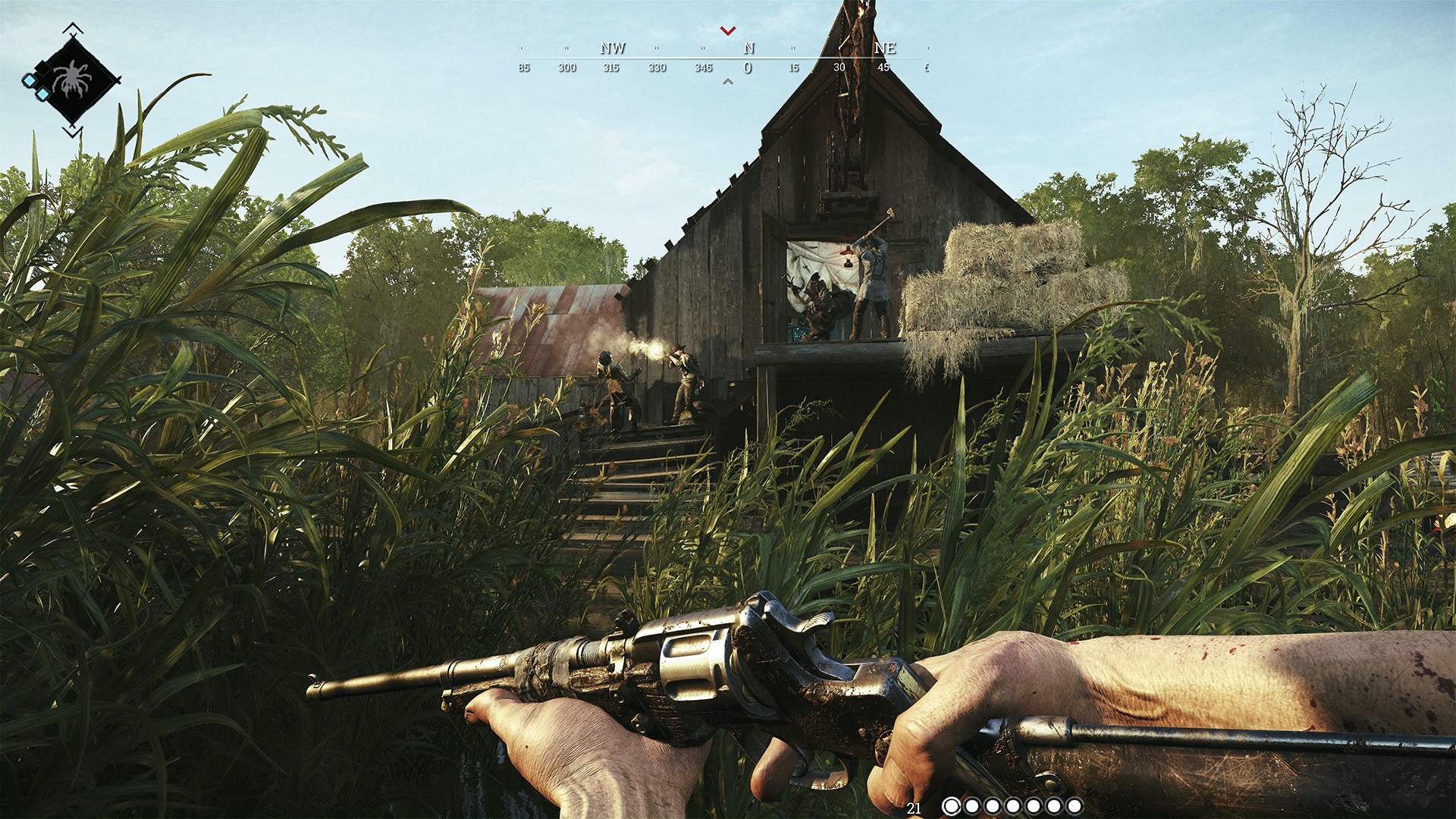 While Hunt restricts information, it does give you evidence to follow. When you find a clue, it will indicate if it’s been found by other players first. Claiming your first clue will begin to grey out areas of the map where the target isn’t located, narrowing your search and giving a sense of where others players might be gravitating towards.

“The mechanic isn’t guaranteed to pull players together, but you’ll be more likely to come across other players in the sectors that remain,” says Schwarz. “It funnels the action towards the boss arena and prevents players from sitting idle.”

And then there are sounds. The zombies and clanking chains and bee ladies aren’t really threats, they’re there as catalysts which might cause you to reveal your location and face the consequences.

That’s because he knows the way sound carries. A gunshot can be heard across the map, and at distance it reverberates: “The sound had to scale, you have to be able to read from the audio,” explains Schwarz. 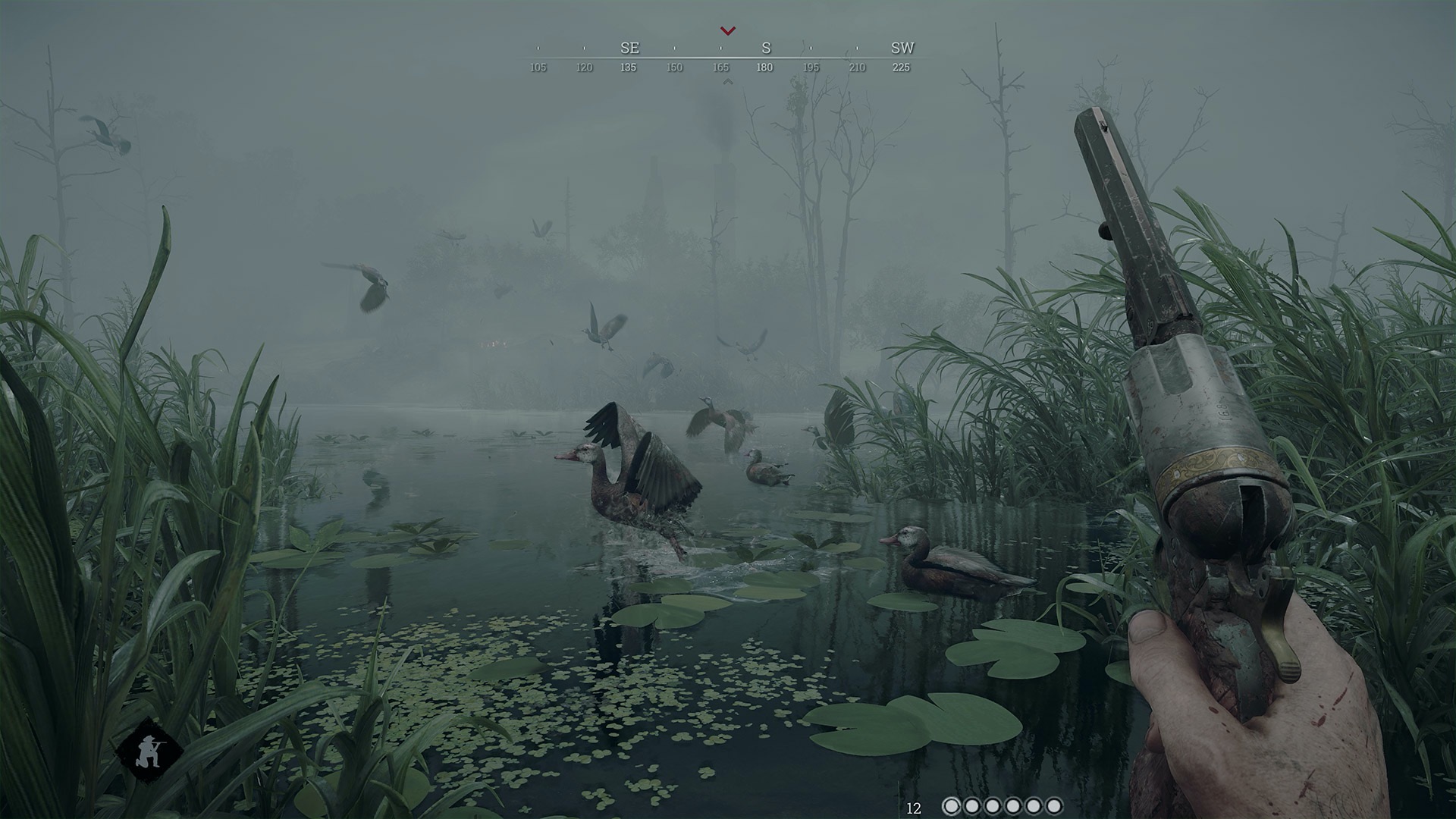 But traps, such as a flock of crows or ducks startled into flight by your approach, can only be heard in the next set of buildings over, and they can only ever be set off by other players – or AI which has been triggered by them.

“So the level designers had to come up with metrics over how we space things apart from each another and minimum distances you should be able to walk from one to the next,” says Schwarz, indicating that the map is a physical reflection of Hunt’s ruleset.

“And you as a player can know that if you triggered a chicken coop, people within 150 metres might have heard it, but further ones won’t. Sound becomes a tactical element, something that you make sure you control: how much you make and how much you reveal yourself. It’s such a fun mental part of this whole game.”

Once you’ve collected three clues, the hunt target will be marked on your map and Hunt’s tension changes. You must ready for a fight, whether you intend to take on the boss or not, because once someone does start to fight it, everyone gains a crucial first piece of shared information about the status of the match.

“The moment you’re with the boss, the tension changes drastically, because all of a sudden you’re in a position that every other player will eventually gravitate to,” says Schwarz. “They might still be a clue or two away from it, or might not yet have heard the gunfire, or maybe you’ve been stealthy enough to obfuscate it, but you know that you need to make a move and to be fast to get rid of the boss, because the boss is a distraction.” 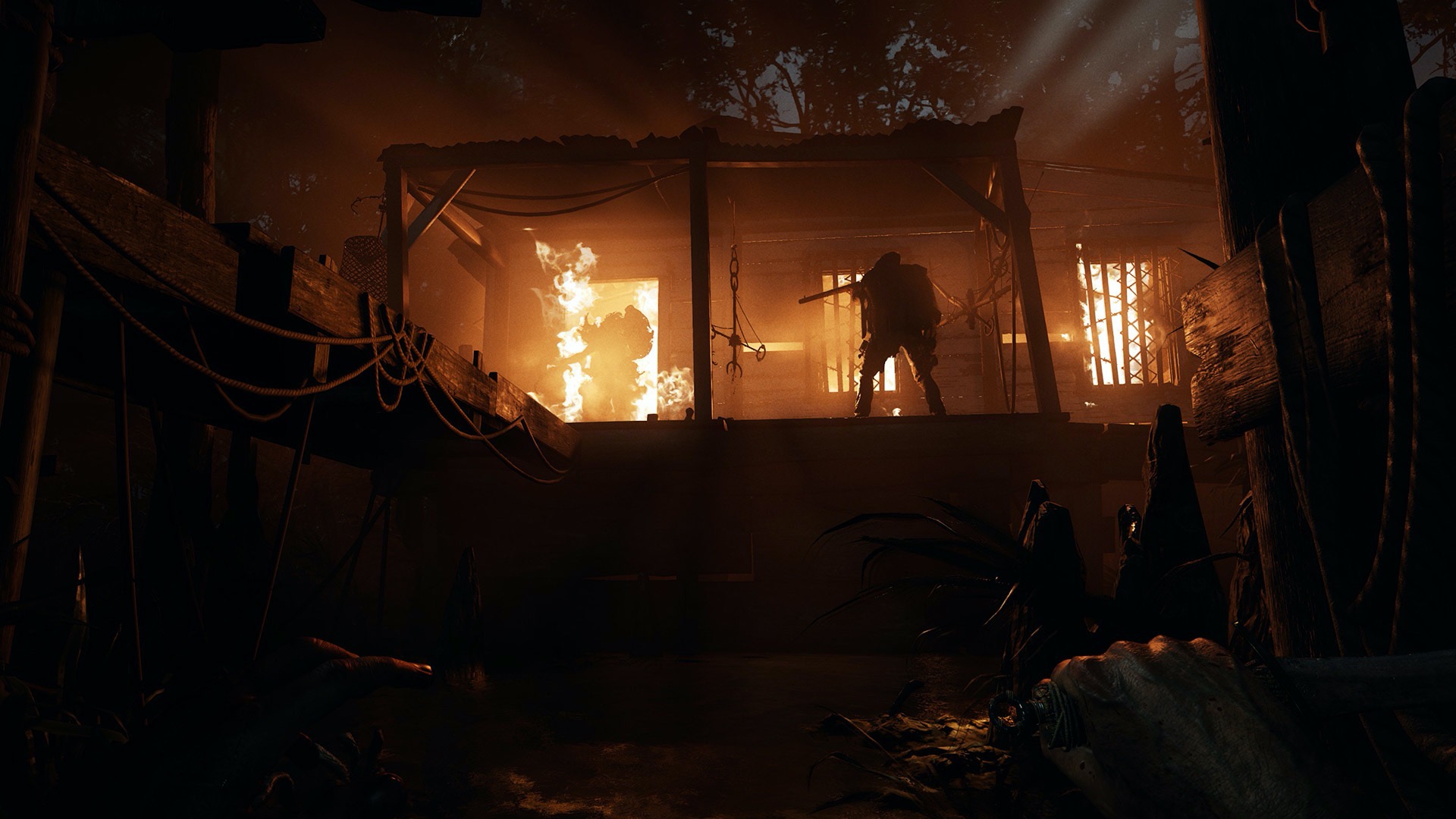 That’s because the boss isn’t the focus of this phase. It’s simply a hump to get past, since it’s once it’s down that the Showdown of the Hunt begins. You’ll need to banish it to claim its tokens, and that means staying within a certain range of its body for several minutes.

Stuck in position, with everyone knowing where you are and wanting what you’re about to get, this is when you’re at your most vulnerable. “So the tension here is about how efficiently and quickly you can get rid of the boss, and then how you can turn it into a defensible position so you can then weather the banishing,” says Schwarz. 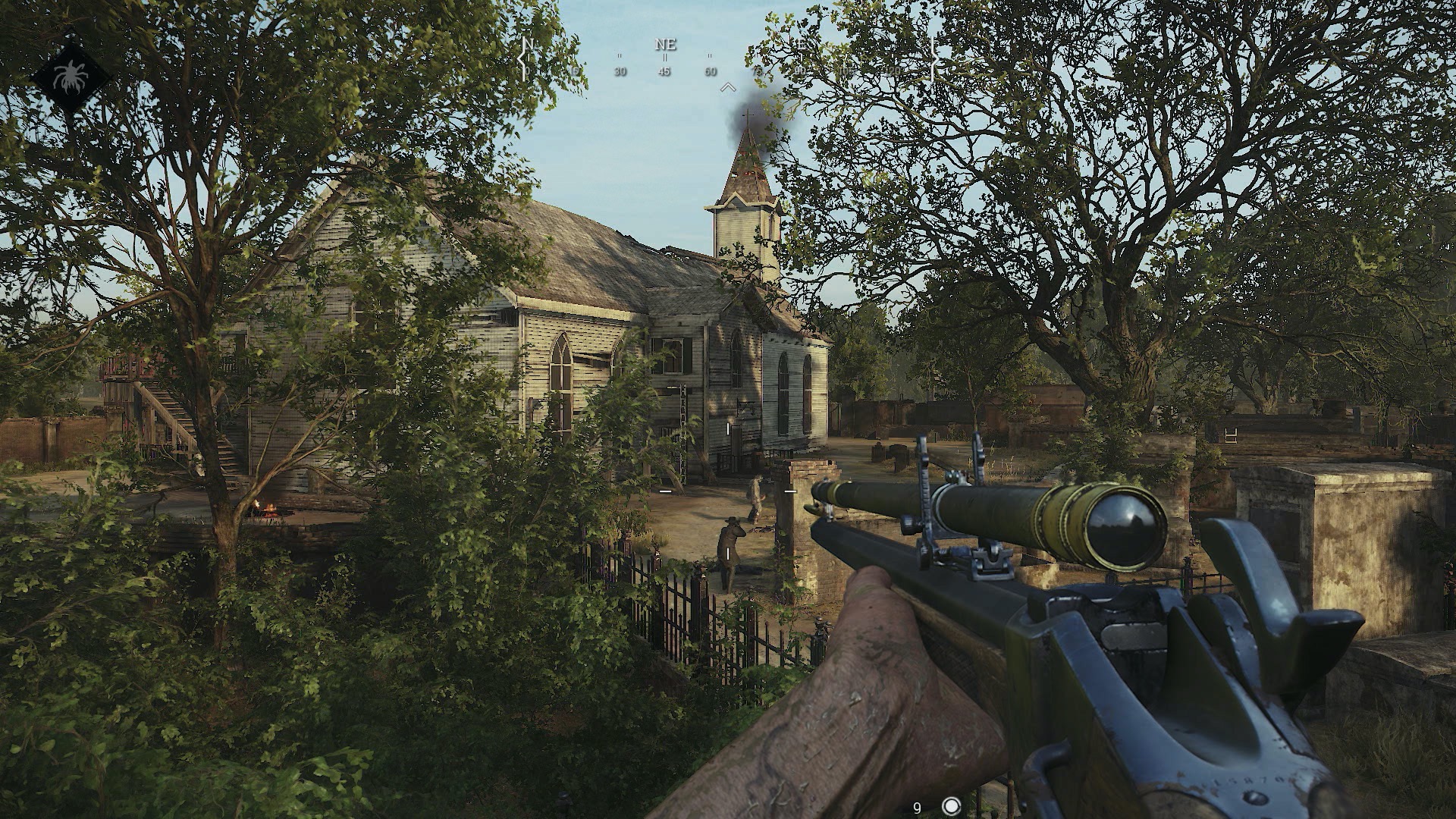 Hunt is designed to intensify that tension. It took dozens of tests to set a banishing time which would give everyone on the map at least a chance to get to the location once banishing begins, factoring in the maps’s randomised obstacles – enemies and traps – on the way and differing running speeds (the Greyhound trait lets you sprint for longer).

“From a spatial perspective, a player should be able to get there,” says Schwarz. “It shouldn’t be a convenient walk in the park; they have to rush and it has to be tense, and they always have to consider that they might not make it. But they have to feel they can, because in the end it’s so much more rewarding.”

“Now it’s about how you can bank this treasure,” says Schwarz. “It’s obviously much more primordial, right? It’s when instincts kick in and sometimes you know they’re on your back but you keep on running, pushing to the exit; come on, come on, don’t turn around.”

Once you’ve grabbed the boss’ tokens, exit points are marked on the map for all players. It’s time to escape, and you know that waiting to ambush you along the way will be all the remaining players. How many? You don’t know.

Part of this new flavour of tension is that the stakes are higher than simply losing the match. By this point, there’s no chance for quiet withdrawal. The only ways out are winning or death, and death in Hunt means permanently losing your character, along with the gear you’ve bought for the match. 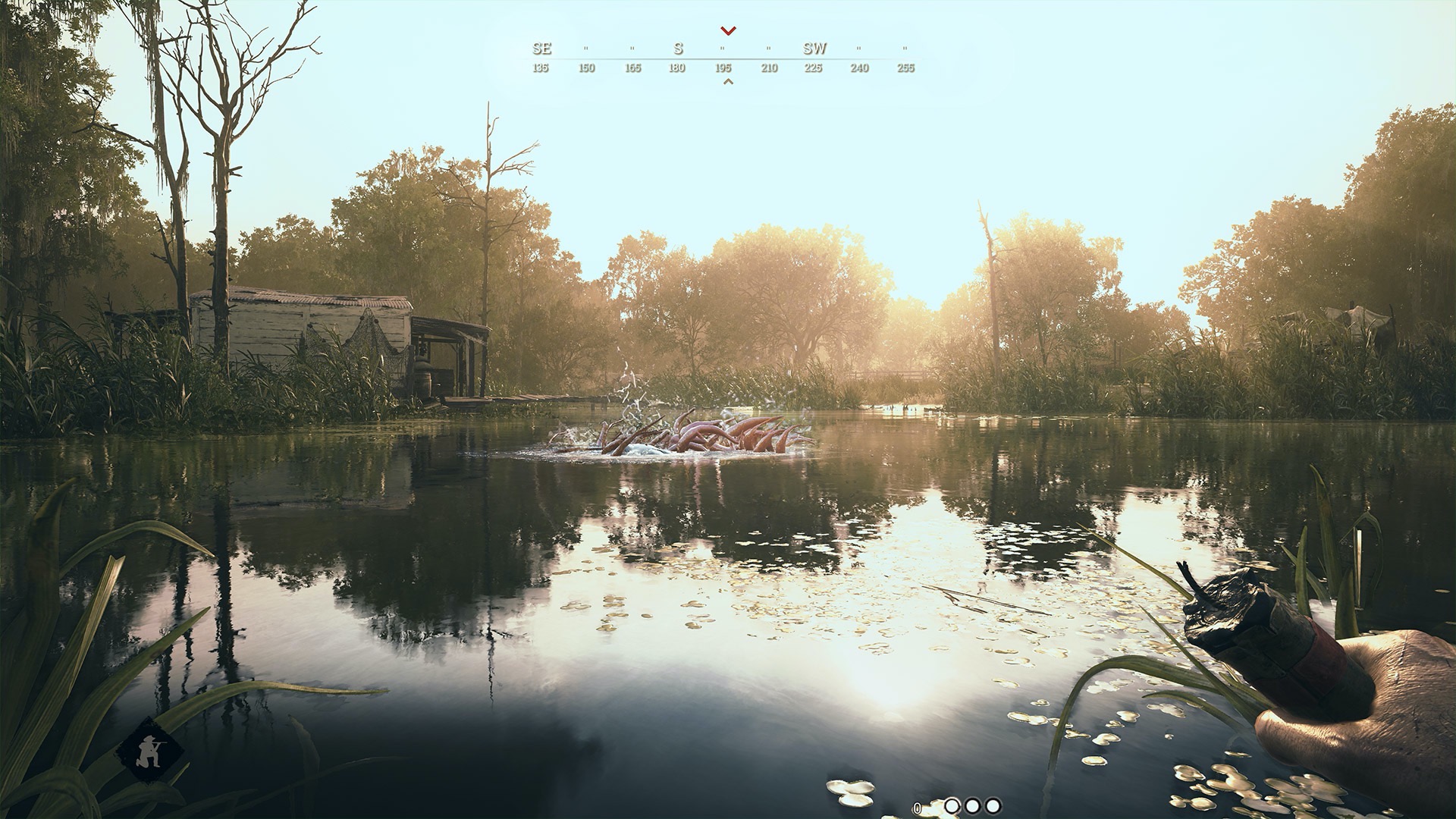 “The way we approached permadeath was that it isn’t supposed to be drastically frustrating,” Schwarz reassures. Levelling up a character doesn’t take weeks, so losing one isn’t demotivating, but it’s nevertheless enough to make death bite. “Our entire meta-progression system is designed around two hours, maybe, three or four good rounds, to have a decent character.”

But the other teams will also have sweaty palms. Which way did the token-bearing players go? And will they be able to get the drop on them? After all, Hunt’s late-19th century weapons require skill to use.

“We tried to pick quirky and flawed weapons,” says Schwarz. The Specter 1882’s pump-action makes it a fearsomely fast-firing shotgun, but if you reload it before emptying the magazine, you’ll lose a precious live round. Reload for security, or conserve your ammo? “It’s imperfect technology from that time; it means we can make it powerful but we can also balance it because of its quirks and handicaps.” 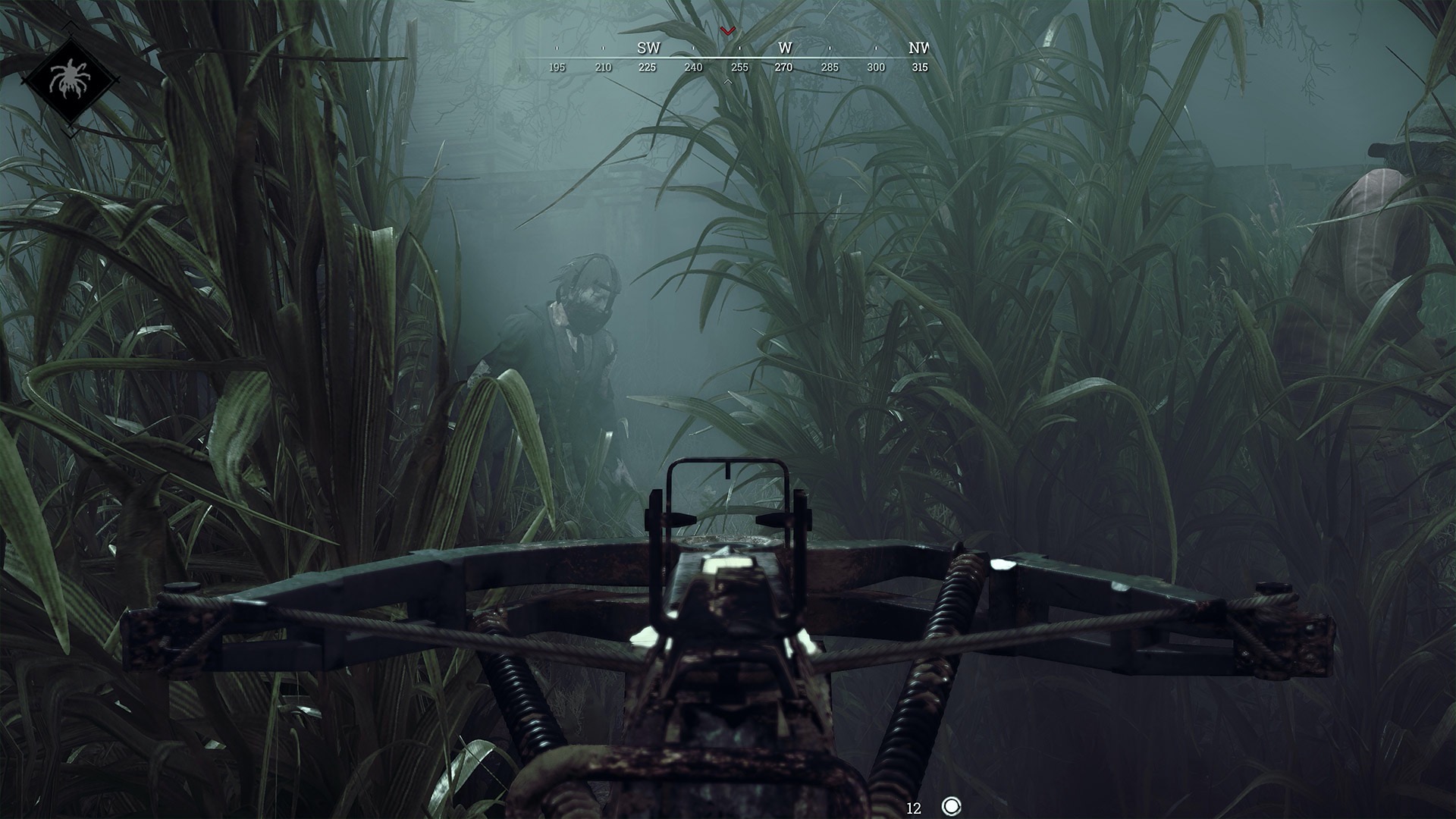 And it doesn’t matter if your character is a veteran. A short- to mid-range headshot is almost always an instant kill. And bringing expensive gear into a match will only lend you flexibility – and now you’ve invested so much in your character, your tension levels will be higher since you might lose it all. “Gear doesn’t give you a silver bullet, only advantages.”

Hunt: Showdown is a game of many tiny parts, from the distance a dying horse will react to you to how far its agonised whinnies travel; from your running speed to the time it takes to banish a boss. But they’re bound by a single aim: to drive tension.

But its most effective piece, and one of the most defining characteristics of this terrible and special game, was one Schwarz never foresaw having such an impact.

“It’s how we deprive the player of information. That scarcity, it wasn’t really our plan, but as we started to put all the billions of pieces together, we started seeing the game emerge from them and how lack of information is really what creeps under the player’s skin. You’re always questioning, always wondering if you’re doing the right thing, and this is what builds up the tension.”