Hades is a roguelike dungeon crawler that sees you fight your way through ever shifting levels of the underworld, from wispy shades of the undead to foes of Greek legend, on frantic battlegrounds that can send you to your death in an instant. As a disabled player, oftentimes I don’t have access to kinds of games like Hades.

I have a connective tissue disorder that means all of my joints naturally extend beyond their normal range due to… something funky with my collagen. It’s great for party tricks - I can unhinge my jaw like a snake to fit an inhuman amount of cheese in my mouth - but I also can’t opt out of hyperextending, which means every time I move a joint without being intentional about what I’m doing, I can risk a sprain or dislocation. I both have to be careful to not over-strain my joints, and also deal with just an inordinate amount of muscle fatigue from normal activity.

This hasn’t stopped me playing video games, but it does limit how I play them. Greg Kasavin, the creative director for Supergiant Games, was kind enough to provide some insight about the design process for weapons like the Twin Fists, and the introduction of accessible design throughout Hades. 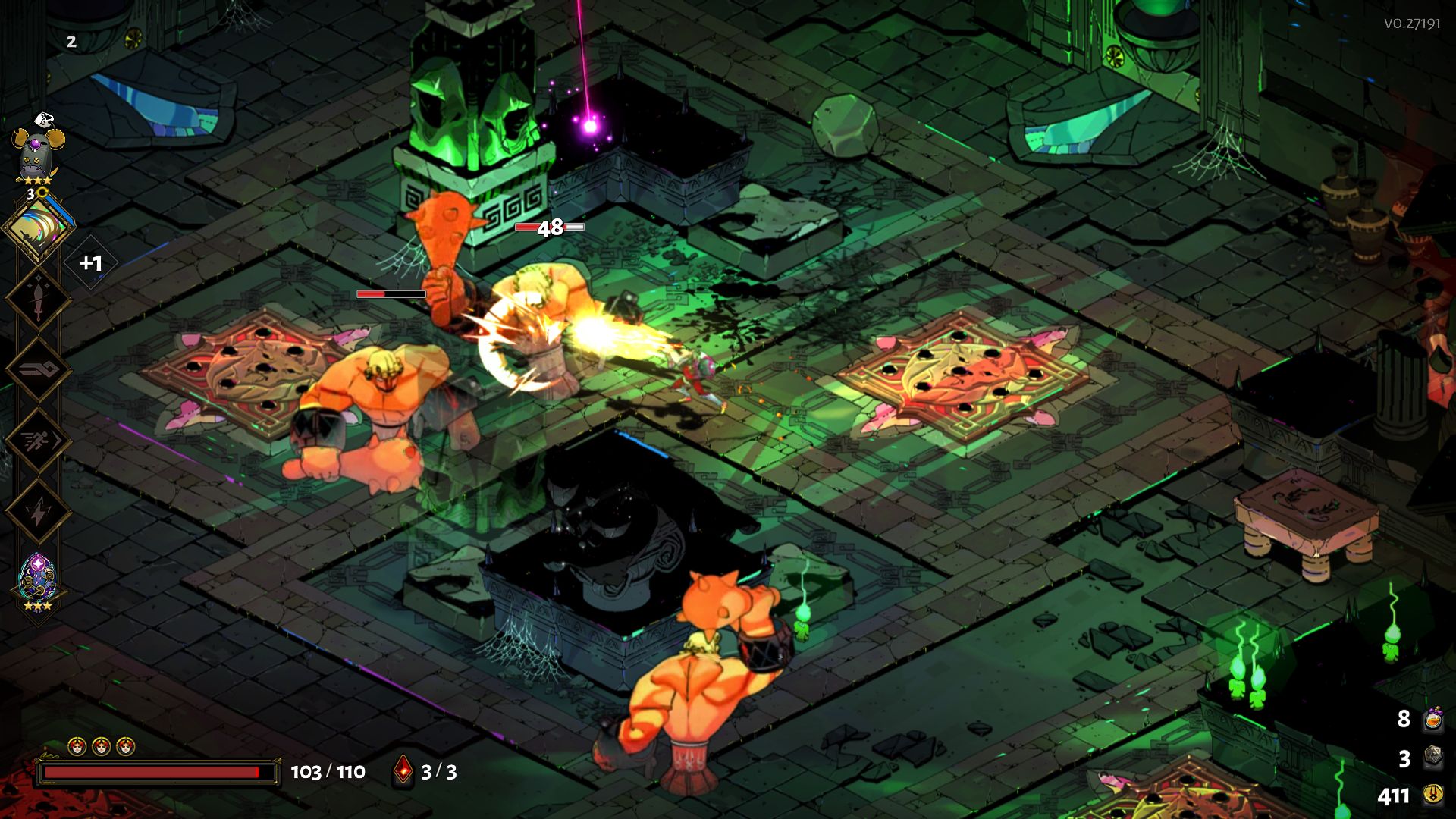 Think of how we see people play video games on TV: furiously mashing buttons on a tightly clenched controller for a few tense moments before YOU DIED appears on screen. By comparison, I can’t safely button mash (or hold a controller that tightly). But Hades has added weapons like Exagryph, the Adamant Rail, a rifle style weapon that satisfyingly rat-tat-tatts out shells with one long press of a button, or fires rockets with another. Unlocking it made a major difference to my ability to stay in the game. Malphon, the Twin Fists, is Hades' sixth and final weapon, added in the Nighty Night Update. Where the Adamant Rail is a tactical weapon - inviting you to control the battlefield with debuff-enhanced rockets as you burst fire from a momentarily safe distance - Twin Fists is fast and punchy and in-your-face action. Like Adamant Rail, however, it doesn’t require any button mashing at all.

As the different weapons are so central to play style, with Twin Fists the design goal was to fill an action archetype that the game didn’t have yet. “Thematically, the idea of a fast-hitting, very direct melee weapon was exciting,” Kasavin explained, adding, “Gameplay-wise and mechanically, we were drawn to the idea of making it an autofire weapon, to contrast some of the input-heavy weapons that we have, and provide a style of play that was kinetic and exciting, but not necessarily as demanding in terms of moment-to-moment button inputs.”

There are genres of games that prioritise progressively improving at a purely mechanical skillset as their core appeal, and those have frequently excluded players like me. Dodge, parry, time your attacks perfectly – or else it’s game over. The cycle of “learn the game, get better, go further” inevitably hits a wall somewhere after an iteration of step one, and I’m not alone in this. There are many players, whether they consider themselves disabled, or have slower reflexes due to age, or simply don’t have the time to dedicate to perfect practise, who struggle to find a space in these games.

So how do you get from here to Hades? You have to take the long way down. I made the leap into the roguelike hack’n’slash dungeon crawler (three for three on things that would usually turn me away) when Hades had just added its Welcome To Hell update featuring God Mode, which gently nudges up your damage resistance every time you die: “Death is not so big a deal in the Underworld. Turn this on if you’re struggling, want focus on the story, or any reason.” As a fan of Supergiant Games’ other creations, it was enough for them to say that proving my competency at the game’s challenges wasn’t going to be the sole hook.

We want the new God Mode in #HADES to help open up the thrilling experience of playing rogue-likes to more folks out there, or just let you relax & enjoy our story. Wonderful to hear this early response to it!

You just turn it on & get tougher; if you die, it powers up a bit. https://t.co/vK7SvCcaOs

It wasn’t easy to begin with. I fell to the first boss repeatedly as I struggled to keep up, playing only in short bursts to protect my wrists. I grew stronger, however - in-game, anyway - and found that where the usual intended loop of “learn the game, get better, go further” has a built-in wall for me, with God Mode on, I was able to seamlessly curve over that barrier.

Now, with Twin Fists, I'm no longer having to dedicate a constant portion of my attention to my hands. I can be more immersed in the game - in its beautiful hand painted maps, in Supergiant’s trademark soundtrack, and in the strategic movement of the fight. Kasavin described the accessibility of Twin Fists as a “beneficial side effect” of the design approach, while noting that “the kinds of feedback our other weapons were getting made us think deeply about what style of play we weren't already supporting.”

Hades has a dedicated channel for feedback in the Supergiant Discord server, where players’ feedback is thumbs-up’d or thumbs-down’d depending on how many other players find it useful. One player, months before the implementation of the Twin Fists weapon, suggested having the “flurry” weapon upgrades (which unlock a rapid autofire mode at the cost of the use of your special attack) be available from the first room for the benefit of players who can’t button mash. It was one of the more highly thumbs-up’d suggestions that month. Where less mechanically adept players often find negativity in gaming spaces, and instructions to “git gud”, it’s comforting to find the Supergiant Discord has fostered a community where this sort of feedback is promoted and uncontroversial. 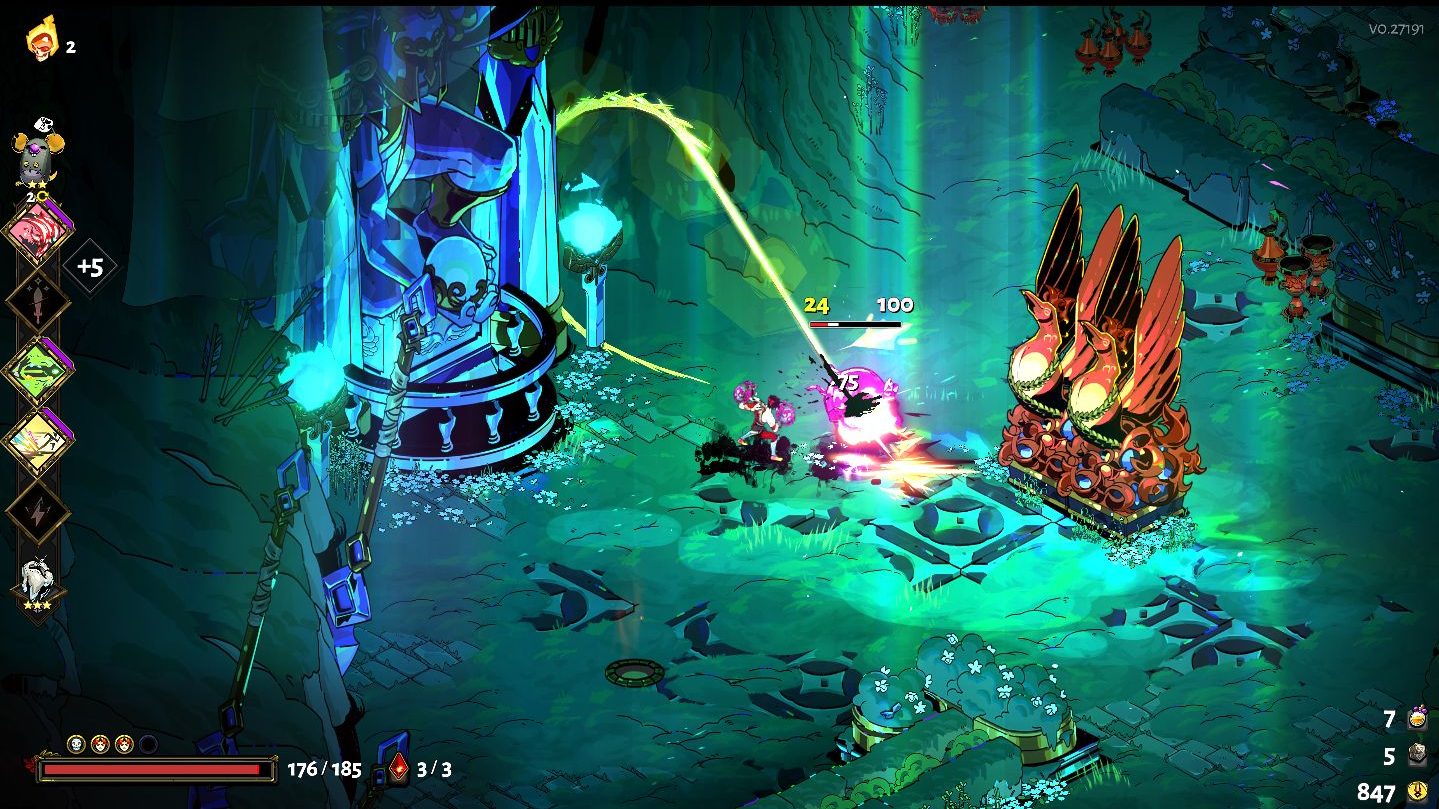 Kasavin emphasised the importance of community feedback in the development of Hades. “Feedback from our Discord community and other sources influences everything we do on Hades, as you can see from our patch notes. We are always interested in feedback from players about their personal experiences with the game, including whether (or to what extent) it's accessible to them.”

As well as informing large scale feature development, community feedback has helped the team to amend issues that disrupt play for disabled players: “For example, while it sounds like small stuff, recently we've iterated on certain visual effects and provided an option to disable camera shake based on accessibility feedback, in addition to things like fully remappable controls.”

Accessible design benefits more players than many think, as it opens games up to people who were previously excluded from more mechanically demanding genres of games. Hades’ inclusive design efforts open up a notoriously difficult genre to a wider realm of players, not only to enjoy the rest of the game world and story Supergiant has created, but the thrill of the fight that might previously be over far too soon. The ending is still waiting for me, and I’ll get to see it as it gets patched in, like so many other game changing experiences in Hades.