"Found my own body floating down the river today. Didn't recognise myself for ages." This may sound like the start of a magical realist detective story, rather than something you'd say in a meeting with colleagues. But in Red Dead Redemption 2, which is rapidly emerging as an unlikely competitor to Zoom and Skype in the world of conference calling, this is business as usual.

I've long been a fan of the way the Cowboy Game - especially its multiplayer mode - mixes obsessive realism with glitchiness and ultraviolence to create a sense of weird, unreal melancholy. But writer, illustrator and good tweeter Viv Schwarz, who related the above anecdote to me, has discovered that this recipe was missing a crucial third ingredient: corporate culture. They've been meeting with workmates in the uncanny environs of RDR2 for some time now, and while they can't swear blind that it's the most efficient place to do business, it is at least not Zoom. So grab yourself a seat by the fire and a rusty tin of hawk viscera, and let's action some deliverables.

"Mostly we were just having a really crap time," said Viv when I spoke to them, about their meeting life before Cowboys. "We were having to deal with all those Zoom and Skype meetings and emails and phone calls... and we were just feeling worse and worse and more annoyed all the time." Minecraft was considered, apparently, but people tended to just wander off and start digging, or dumping gravel on the meeting table, "so picking the most ludicrous game to meet in seemed good."

But then, as it turned out, it wasn't quite as ridiculous as expected. "The thing is," Viv explained, "the Cowboys just look right when they're sitting around the campfire? They look like they're in a meeting: scratching noses and frowning, and occasionally gesturing." 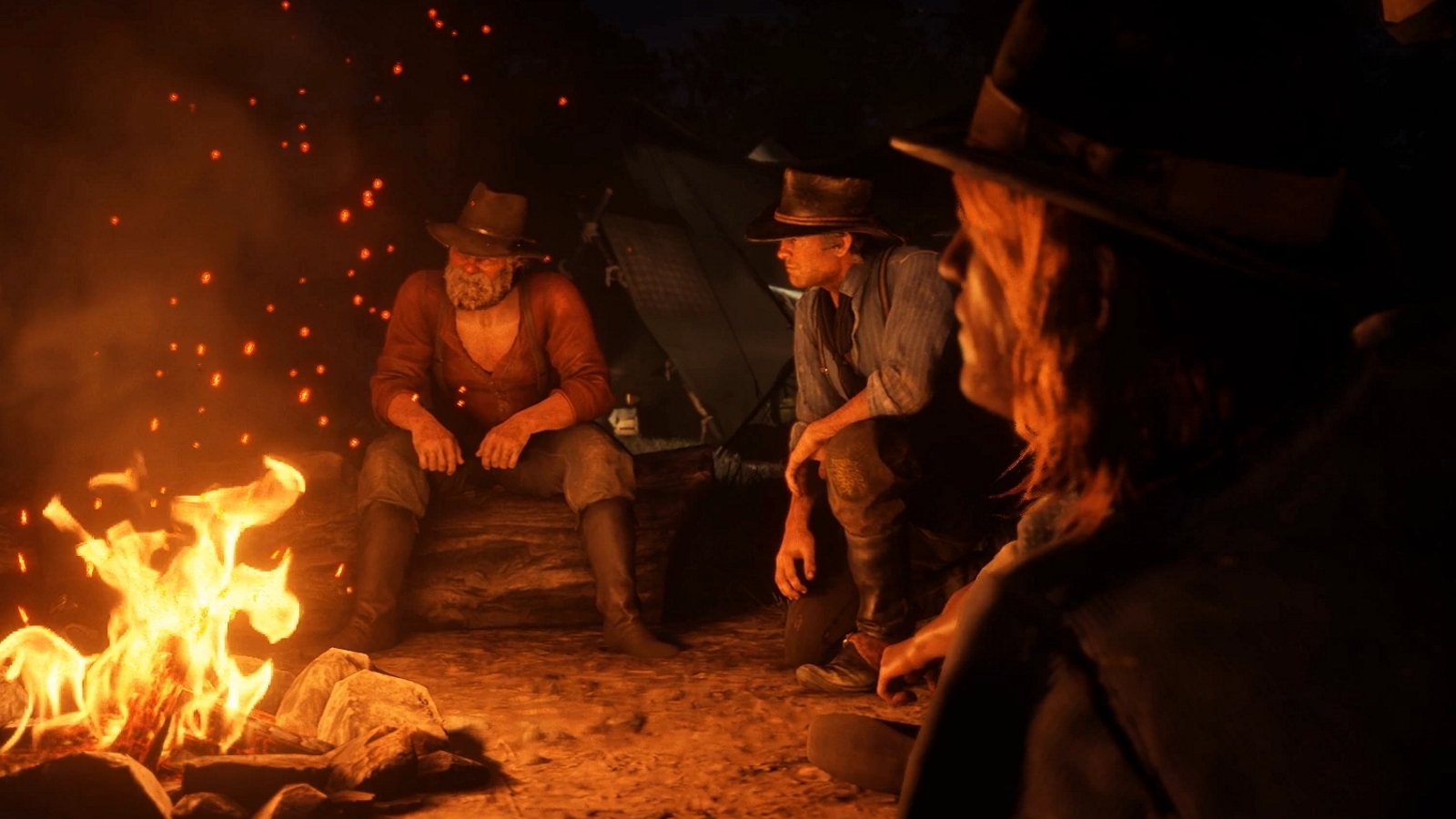 Viv's colleagues have taken some steps to boost their immersion in the world of Cowboy conferencing, and work around the limitations of the game at the same time. "We keep trying to have coffee breaks, because it feels right - and because if you don't do anything you get kicked off the server for idling. So we order a load of coffee in, and keep brewing it to unidle". Apparently, the posse are considering getting a stew pot next, "because it feels kinda rude that we can't share snacks", but doing so will involve Viv becoming a trader, and they're a bit worried that doing so will make the camp too busy.

Etiquette, too, is important. It's polite to wash your face before a Cowboy meeting, of course, "as sometimes you can be really caked in blood and dirt, and not realise". And that's just not a professional look. Participants should also make liberal use of emotes. Viv, for example, sometimes opens up RDR2's weapon catalogue when they're reading a shared document IRL, because it makes it look like their Cowboy is thoughtfully studying it in-game. It's an expensive tactic, since if they don't order anything, their Cowboy just closes the catalogue and leaves the table, and it's pretty hard to negotiate purchasing while reading a document at the same time - but it's almost worth it for the realism. 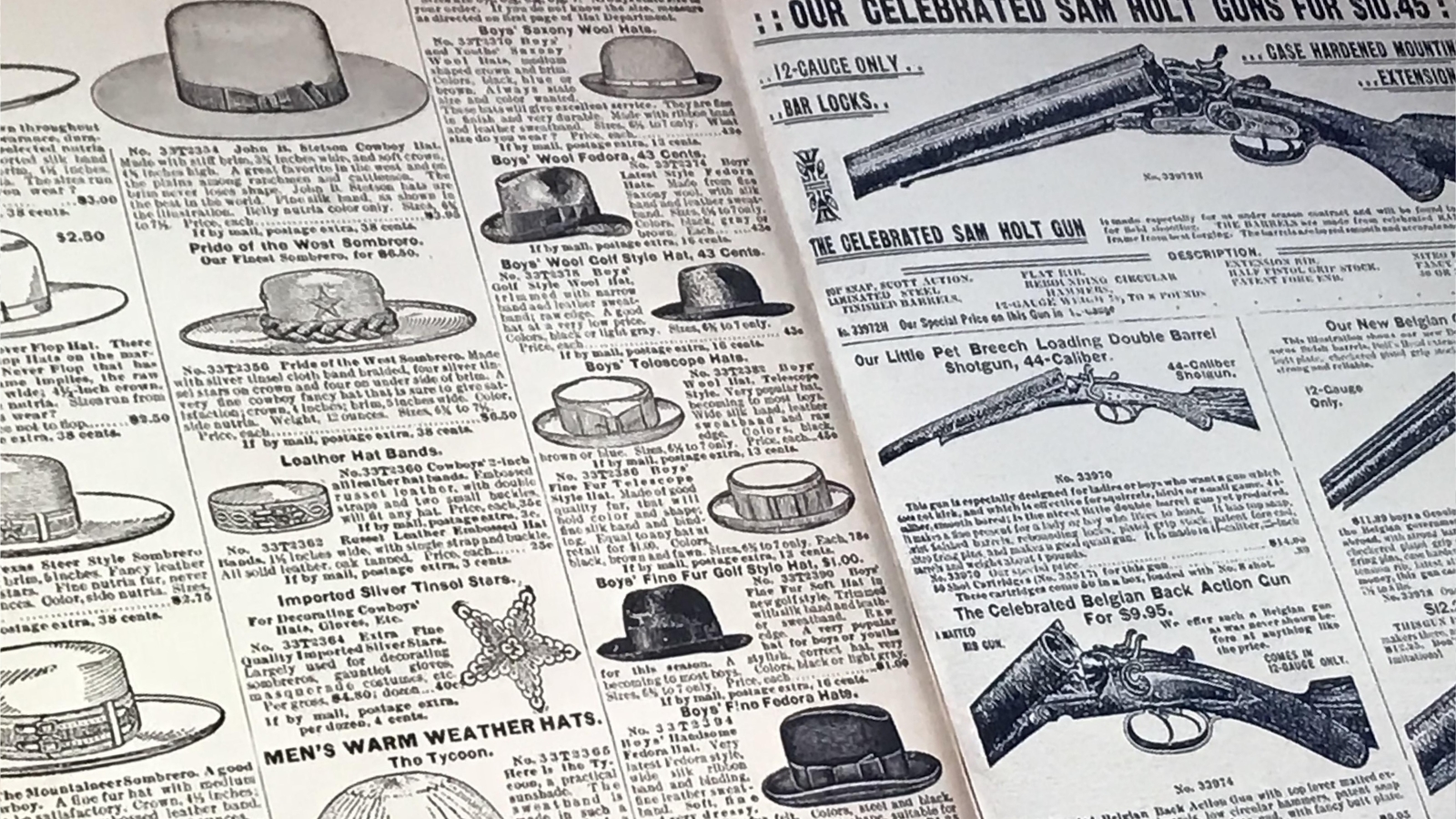 An added perk to holding meetings in Cowboy space, Viv revealed, "is that when you agree that the meeting is over, you can all jump on your horses and do crime or justice, which is a lot less awkward than everyone smiling at the camera while they're trying to sign off". Not only that, but if colleagues are successful in the post-meeting rampage, they might just get to spend the next meeting sitting in nice mismatched chairs by the campfire, rather than having to squat on their haunches in the dirt. "Also, the landscape is amazing, so you can walk and talk, and if some other posse attacks they only get five minutes to fight you. So it's in effect a tea break, except you don't have to pretend to make tea, or agree when it happens."

Nevertheless, RDR2 is not without its drawbacks as a piece of conferencing software. And while it may avoid the ritualistic solving of minor audio and connection problems that attends the start of most conventional video calls, it comes with its own set of technical idiosyncrasies, as Viv's tweets attest:

"Can you parlay these people, they keep hogtying me"
"Where did you spawn?"
"Am I not on the map?"
"You're miles away... Let me just kick you out from to the posse and invite you again"

And then there are the glitches. The main problem encountered, apparently, is that the meeting table sometimes doesn't exist for everyone. Occasionally, the whole camp will vanish, so along with the fire, leaving everyone talking away in the dark until it reappears. And if someone gets dropped out of the posse and returns, they can't sit down for the remainder of the discussion. Oh, and of course, there's the fact that "sit on the ground" is mapped to the same control as "strangle the nearest person", which can apparently lead to some pretty robust brainstorming sessions.

"It’s the same glitches as usual," Viv said, "only, they're funnier when you're talking about business about the same time. Like, you fall off a cliff, and your horse falls on your head and kills you, after which you respawn elsewhere. But your body and horse haven't disappeared. So your colleague gets distracted, silently wondering whether they should revive your horse, and trying to figure out whose body lies crushed beneath it, and all the while you're walking back from miles away, carrying on about the project."

But perhaps the eeriest presence in the world of business cowboys is Cripps, the ever-present NPC in charge of organising and maintaining the player's camp. "We thought it would be nicer to meet at the campfire rather than in a saloon, as we just liked being outdoors for a change", Viv lamented. "But we forgot that this would mean Cripps continually interjecting with stories about his life". Apparently, Viv's posse have had to work hard not to be distracted by his constant mouth-harp playing, which becomes particularly challenging when he begins to play more and more slowly. "My thoughts just slow down. I have to sit with my back to him or else the mouth harp drives me nuts," Viv said.

Sometimes, needless to say, Cripps disappears, but the sound of his mouth harp continues to haunt the camp. Viv is currently looking into whether you can silence the grim musician by continuing to trade with him, but fears that this wouldn't help anyone else in the posse, for whom the infernal jam would continue unabated. "I noticed it is possible for him to become invisible to team members, meaning they can then stand on him, while in their own world they are standing on the ground," Viv explained, running me through their logic in deducing the rules governing this eldritch presence. "But to be honest, he's a really good stand-in for the distractions we would have when meeting in a cafe usually, and he can be useful in breaking things up when we've lost focus." 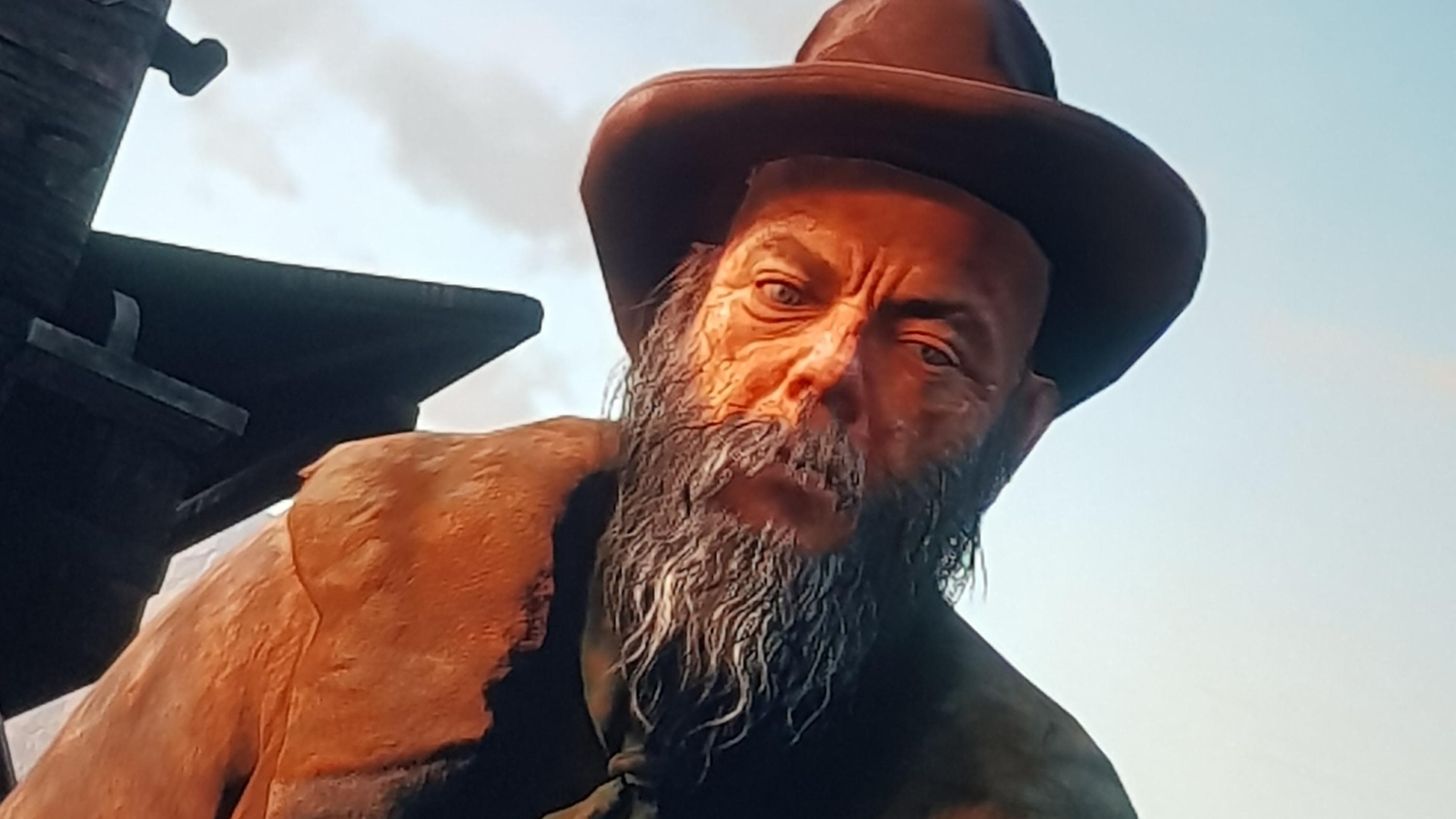 The final drawback of the virtual campfire as a meeting venue is a significant one, unfortunately. You see, to get to a point where you can invite friends into a posse, and have a camp to meet at, you've got to go through the intro quests to Red Dead Online, which are unskippable, relatively dull, and time-consuming. It can take an hour or more for a Cowboy to progress through this mandatory prologue. "Especially," said Viv, "if the people you get paired up with for staff training decide to sabotage your horse wrangling".

We did discuss how fun and weird it would be if Rockstar opened up business-only servers for commercially-minded Cowboys. There's certainly a demand for it, if the interest shown by companies in the wake of Viv's tweets going big is to be believed. But we'd only floated the idea for a few minutes when we both realised how quickly the idea would sour: the whole endeavour would get bogged down in dull, intricate rules, and as Viv pointed out "it might technically be gentrification". Thinking about it, I was reminded suddenly of Deadwood, the best show ever on telly, and Al Swearengen's increasing worries over the encroachment of civilisation - somehow, then, its use as a venue for meetings has made RDR2 more thematically potent as a Western. 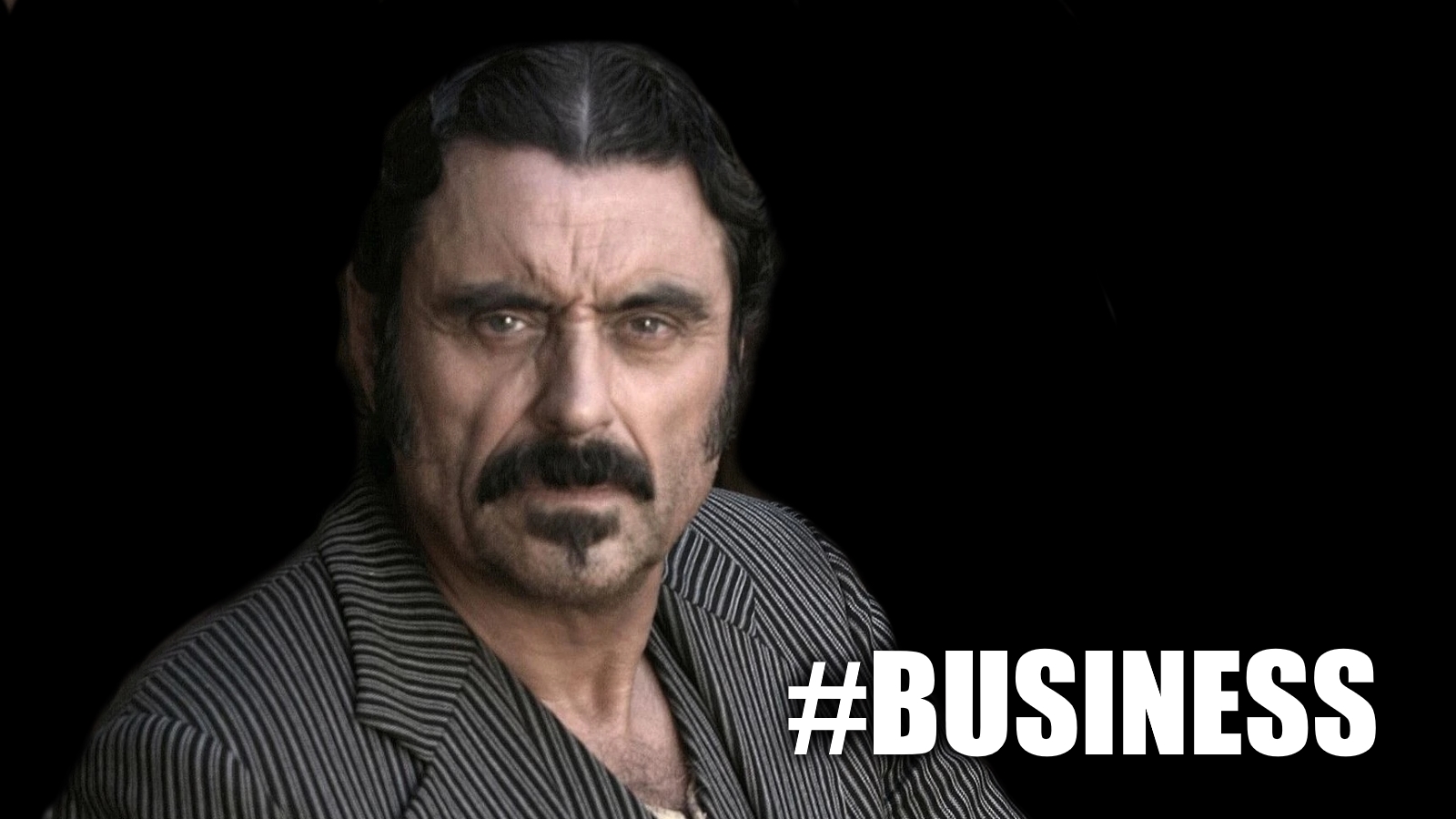 Perhaps, then, this West is best left wild? "I mean... it isn't a good game for an uninterrupted meeting," concluded Viv. "Or even... a meeting... really. But it still beats Zoom."